A Compact Thermally Driven Cooling System Based on Metal Hydrides

:
The main purpose of this study was the assessment of the possibility of increasing the production of biogas through the pre-treatment of thickened excess sludge (TES) by means of the hydrodynamic cavitation (HC) conducted at different levels of energy density (EL) i.e., 70, 140 and 210 kJ/L. The experiments were performed on a pilot scale, and a mixture of thickened primary sludge (TPS) and TES was used as digester feed. The results documented that an important parameter determining the possibility of obtaining an enhanced methane production is the value of energy input in the HC process. This parameter determines the changes occurring in sludge as a result of disintegration (i.e., sludge floc deagglomeration, lysis of cells, re-flocculation process and the related release of compounds susceptible to biodegradation from sludge flocs). The maximum increase in methane yield (MY) of 152% was obtained for EL = 140 kJ/L. In this case, HC mainly caused sludge floc deagglomeration. An increase in MY was also recorded when TES was subject to the disintegration process at EL = 210 kJ/L. However, it was 4.3 times lower than that observed for EL = 140 kJ/L. Pre-treatment of TES at EL = 70 kJ/L did not contribute to an increase in methane production.
Keywords:
anaerobic digestion; hydrodynamic cavitation; thickened excess sludge; methane yield; wastewater engineering

2.1. Characteristics of the Substrate

The following substrates were used in the experiments: TPS, TES and digested sludge (DS) (used as inoculum) from a municipal WWTP (PE = 1 580 000) (Table 1). At the treatment plant, the anaerobic digestion process is conducted at hydraulic retention time (HRT) in a range of 22–26 days, and at a temperature of 36 °C.

The HC process was carried out in a laboratory device equipped with a multi-use rotor driven by a motor with a power of P = 2.2 kW, motor speed: n = 2800 rpm (patent No. 214335). More details are presented in work Zubrowska-Sudol and Walczak [18]. A 10 L sample of TES was used for each disintegration process, and the process was carried out at a selected energy density (EL = 70, 140, 210 kJ/L), expressed in kJ per 1 liter of disintegrated sludge. The amount of energy used in the disintegration process was controlled by an electricity meter (energy density [kJ/L] was converted into the amount of electricity [kWh], which enabled the precise collection of a sample from the device after reaching the assumed energy consumption). The amount of energy was also defined as specific energy (ES), expressed in kJ per 1 kilogram of total solids of disintegrated TES.

The experiment consisted of three series (S1, S2 and S3). The individual series differed in the level of EL, at which the HC process of TES: S1-EL = 70 kJ/L, S2-EL = 140 kJ/L and S3-EL = 210 kJ/L was conducted. In each series, the anaerobic digestion process was performed in two parallel digesters, with a total volume of 44 L each, and working volume of 29 L, as shown in Figure 1. In order to maintain the same conditions as at the WWTP, sewage sludge was mixed in the same mass ratio (50% TES and 50% TPS). As mentioned above, the inoculum was digested sludge sampled from the mesophilic anaerobic digester. It constituted 20% of the working volume of the reactor. The constant parameters for both digesters were: working volume = 29 L, temperature = 36 °C, and pH in the range of 7.1–7.5. Sodium bicarbonate and hydrochloric acid were used for pH adjustment. A mixture of digested sludge constituting the inoculum, concentrated TPS and a disintegrated TES was introduced into the first anaerobic digester (AD1). The second digester (AD2) was a reference point for the first, and its substrate differed only in that the TES was not subject to the disintegration process. The digesters for each series are described in the following abbreviations:
AD1-S1—anaerobic digester with pre-treated TES at EL = 70 kJ/L-series 1;
AD2-S1—anaerobic digester without a pre-treated-series 1;
AD1-S2—anaerobic digester with pre-treated TES at EL = 140 kJ/L-series 2;
AD2-S2—anaerobic digester without a pre-treated-series 2;
AD1-S3—anaerobic digester with pre-treated TES at EL = 210 kJ/L-series 3;
AD2-S3—anaerobic digester without a pre-treated-series 3.
Owing to this methodical approach, it was possible to check whether the process of disintegration of TES before its introduction into the anaerobic digester allows for a greater production of biogas. In order to compare the results obtained in all series (S1, S2 and S3), a relative values of parameters characterizing the effectiveness of the anaerobic digestion process i.e., percentage increase in methane yield (MY) and biogas yield (BY) and percent increase in biogas/methane accumulation, were used.
The scope of the experiment included:
The sludge was centrifuged for 30 min with a speed of 15,000 rpm (centrifuge MPW–350), and then filtered through 0.45 mm filters, to obtain the liquid phase in each sample. All chemical analyses were carried out in duplicates according to APHA Standard Methods [20]. The quantity and the composition of biogas were measured daily. Measurements of biogas were performed by means of a MGCI meter by Ritter, and measurements of biogas components were performed by means of a gas analyzer GA 5000 by Geotech.

3.2. Impact of Hydrodynamic Cavitation on the Anaerobic Digestion Process

3.2.1. Changes in the Characteristics of the Liquid Phase of Sludge during the Anaerobic Digestion Process

3.2.2. Impact of Hydrodynamic Cavitation on Biogas and Methane Accumulation

3.2.3. Impact of Hydrodynamic Cavitation on Biogas and Methane Yield

The outcomes of this study proved that an important parameter determining the possibility of obtaining an increase in methane production in the anaerobic digestion process is the value of energy input in the HC process (defined as EL or ES). This parameter determines changes occurring in sludge as a result of disintegration (i.e., sludge floc deagglomeration, lysis of cells, re-flocculation process, and the related release of compounds susceptible to biodegradation from sludge flocs).
The maximum increase in MY of 152% was obtained for EL = 140 kJ/L (corresponding to ES = 3636 kJ/kgTS). In this case, HC mainly caused sludge floc deagglomeration.
An increase in MY was also recorded when TES was subject to the HC process at EL = 210 kJ/L (Es = 5526 kJ/kgTS). It was 4.3 times lower than that observed for EL = 140 kJ/L, however. This was highly probably caused by the process of re-flocculation of disintegrated sludge particles (resulting in the lower biological accessibility of organic matter contained in sludge).
Pre-treatment of TES at EL = 70 kJ/L (Es = 2023 kJ/kgTS) did not contribute to methane production enhancement. The amount of produced biogas/methane in the samples with and without pre-treatment was comparable in such a case.
In summary, for the purpose of increasing biogas production, it would be justified to apply pre-treatment of TES before digestors, namely the HC process at the EL = 140 kJ/L. When considering the application of the process in the technical scale, it is also worth taking into consideration additional benefits, namely: (i) an increase in the susceptibility of sludge to dewatering; (ii) a reduction of the costs of management of sludge due to increased VS reduction; (iii) a reduction of mixing energy consumption, as a result of lower viscosity of sludge hydrodynamic cavitation.

The research was co-financed from the resources of the Municipal Water Supply and Sewerage Company in Warsaw JSC. 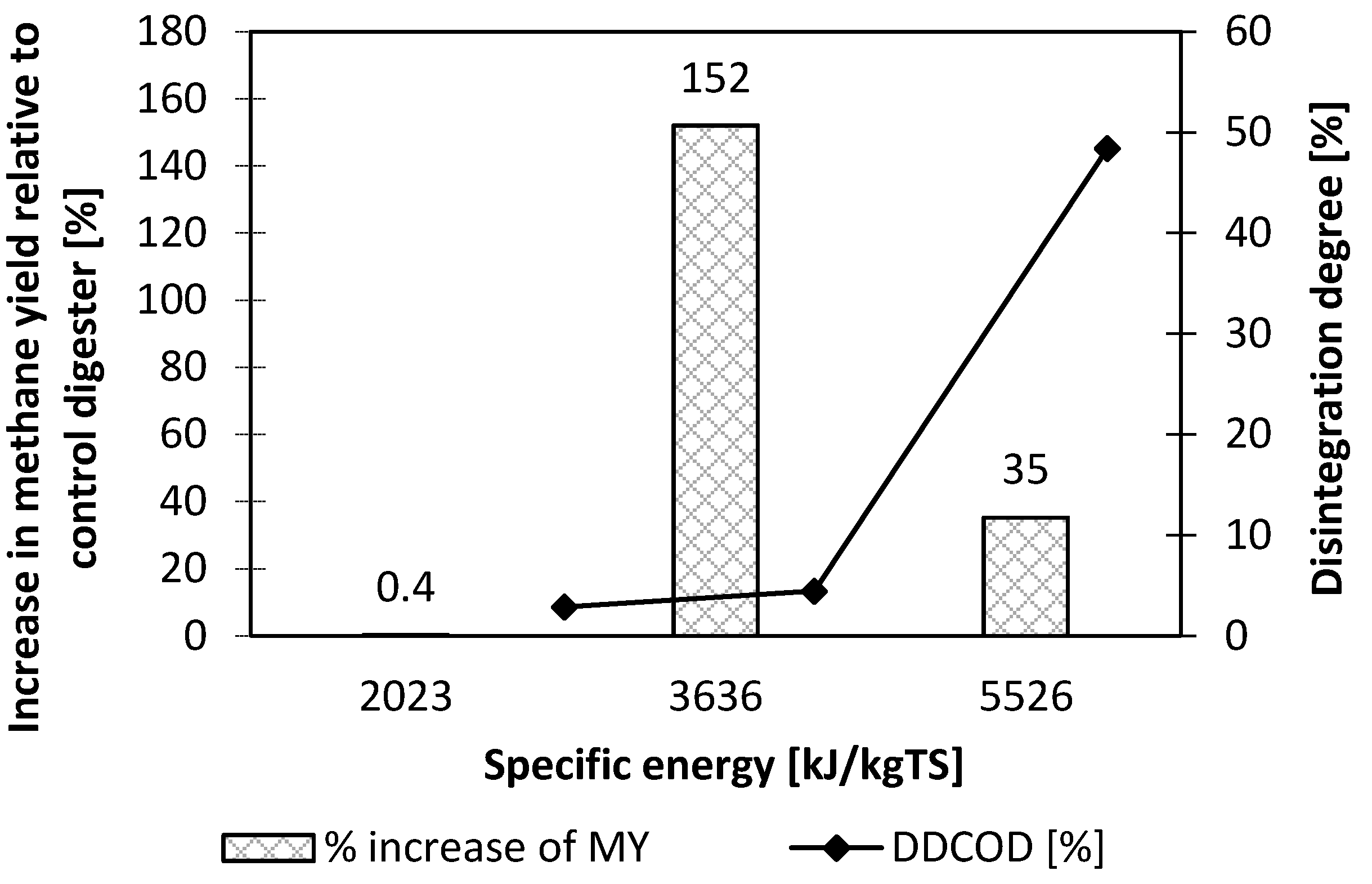