This paper demonstrates a new method by which the energy storage density of compressed air systems is increased by 56.8% by changing the composition of the compressed gas to include a condensable component. A higher storage density of 7.33 MJ/m3 is possible using a mixture of 88% CO2 and 12% N2 compared to 4.67 MJ/m3 using pure N2. This ratio of gases representing an optimum mixture was determined through computer simulations that considered a variety of different proportions from pure CO2 to pure N2. The computer simulations are based on a thermodynamic equilibrium model that predicts the mixture composition as a function of volume and pressure under progressive compression to ultimately identify the optimal mixture composition (88% CO2 + 12% N2). The model and simulations predict that the optimal gas mixture attains a higher energy storage density than using either of the pure gases.
Keywords: GLIDES; pumped storage; compressed air storage; vapor liquid equilibrium; binary mixture GLIDES; pumped storage; compressed air storage; vapor liquid equilibrium; binary mixture

Energy storage is a central piece in the efforts to modernize the electric grid, reduce cost of electricity to both utilities and end users, and to enable higher penetration of renewable energy technologies. Various technologies have been invented for energy storage with different degrees of maturity. An extensive review of the available energy storage technologies, their cost, performance and maturity is presented in [1]. Large-scale electric energy storage is dominated by Pumped Storage Hydropower (PSH) with a share of approximately 99.5% of the total installed capacity worldwide on a GW basis [2]. Large-scale non-PSH electric energy storage is dominated by Compressed Air (CAES) followed closely by Lithium-ion batteries as shown in Figure 1.
PSH is a mature technology with a relatively high round-trip efficiency [3]. However, it is only economical at a scale of 100 MWe and higher [4] and it has poor expansion potential in the US since most suitable sites have already been exploited. The geographical and scale limitations of the PSH makes it unsuitable for behind the meter storage in buildings. Compressed air energy storage (CAES) is another large-scale storage that uses turbomachinery to store and retrieve energy from high-pressure reservoirs. Conventionally, CAES uses natural caverns as storage vessels. Conventional CAES is, similar to PSH, geographically limited by the availability of naturally occurring caverns [5]. Above-ground CAES, that uses pressure vessels rather than caverns, have been proposed and smaller scale systems built [4,6]. The round trip efficiency of CAES systems is in the 40–50% range [4,7]. More advanced configurations of CAES have been investigated and were claimed to have significantly higher round trip efficiencies [8]. Above-ground CAES is amenable to installations in buildings behind the meter. However, their relatively low round trip efficiency hurts their economic viability. Liquefied Air Energy Storage (LAES), similar to CAES, stores electric energy in the form of high pressure, low-temperature liquefied air. Different possible configurations of LAES systems were analyzed in [9]. The study proposed hybridizing the LAES with another energy storage technology of faster response time, such as a Lithium-ion battery, to mitigate the slow intrinsic response of LAES. Round trip efficiency in the range of 50% to 62% has been reported in the literature for LAES [10,11]. Batteries are the most ubiquitous electricity storage device due to their excellent modularity and scalability from fractional- to Mega- watt scale. Batteries have high energy density (ED) owing to the high energy levels that can be stored in chemical bonds. They have been typically manufactured with capacity in the range of few kilowatt-hours. However, recently, Megawatt-hour scale battery systems have started to emerge as an option for grid-scale energy storage. Despite their ubiquity and high energy density, battery systems still face serious challenges to their adoption for large-scale electricity storage. Batteries have limited life and deep cycling them accelerates their deterioration [4]. They require replacement every few years and they are made of hazardous chemicals. The process to dispose of them safely is environmentally and financially costly. A great deal of research and development effort has been invested in reducing the cost, increasing the lifetime, and improving management systems of grid-scale battery systems [4,12,13]. Lithium-ion batteries are so far the most mature and readily available for large-scale storage. Current research is focused on better chemistries [14,15,16] for these batteries. The Ground-Level Integrated Diverse Energy Storage (GLIDES) is a recently invented modular technology that utilizes gas compression for electric energy storage [17]. Its scalability makes it suitable for behind the meter storage in buildings as well as for grid-scale storage. GLIDES relies on hydraulic compression of gas inside a vessel to store energy. Its modularity makes it suitable for installations in urban areas where storage is most needed and real estate is limited. Effort is continuing to improve the economic potential of GLIDES by reducing its first cost and increasing its energy density to reduce the overall cost per kWh. Typically, GLIDES uses air as the compressed gas. Merely compressing air penalizes the energy density. Other inert, innocuous, inexpensive gases can vastly improve the energy density. This paper presents a vapor–liquid equilibrium model to calculate the maximum possible increase in energy density that results from replacing air with a mixture of nitrogen and carbon dioxide. The working principles of GLIDES will be presented in the methodology section followed by modeling and analysis.

The concept, advanced configurations, and experimental evaluation of GLIDES are referenced in [18,19,20,21]. Only a brief description of the working principles of GLIDES is shown in Figure 2. Initially, the pressure vessels are charged with a gas to some initial pressure. To store energy, a positive displacement pump pushes liquid into the pressure vessels. The liquid column level inside the vessels rises and the gas is compressed, causing its pressure to increase. This process continues until the maximum allowable working pressure of the vessels is reached. To retrieve the stored energy, liquid is let out of the vessels. The liquid flows through hydraulic turbine which in turn spins an electrical generator to produce electricity.
Water was originally selected as the compression liquid because of its abundance and low-cost. Air was originally selected as the compressed gas inside the vessels. This is because air is abundant, low-cost, non-toxic, and non-flammable.

The energy stored in GLIDES is from compression work that is done by a compression liquid column on a gas in a vessel and is given by:
To maximize ED of GLIDES, one needs to either maximize the pressure, maximize the change of volume or maximize both.
In the absence of phase change, pressure rise is coupled with the change in volume under isothermal compression. In this case, the maximum ED achievable using a certain vessel is limited by the maximum allowable working pressure of the vessel. However, increasing the maximum allowable working pressure requires stronger storage vessels and more safety inspections which increases the cost of GLIDES on a kWh basis. If, on the other hand, a gas is used such that when compressed it condenses into liquid, pressure is decoupled from the change of volume under isothermal compression. Since the density of the condensed fluid is higher than its density in vapor phase, the volume that can be utilized for energy storage is increased. In this case, the maximum ED achievable is limited by the volume of the vessel and the saturation pressure of the gas under the working temperature. These two cases are illustrated in Figure 3.
An inexpensive, non-toxic, non-flammable, and readily available gas that condenses at relatively high pressure at room temperature is CO2. Although, using CO2 maximizes the volume of the vessel that can be utilized for energy storage, the pressure is restricted to approximately 60 bar, depending on the ambient temperature. This pressure is much lower than the existing vessel’s maximum allowable working pressure of 140 bar [21]. The goal of this study is to determine whether using a mixture of air and CO2 can result in higher ED than using air alone. To do so, we model the process of compressing a mixture of a non-condensable gas under the working temperature and pressure (N2) and a condensable gas (CO2). N2 is used to represent air to simplify the model. The model predicts the instantaneous composition of the mixture, the pressure and the volume of the gas mixture. ED is then calculated by numerically integrating the pressure over the volume bounds. The model was run parametrically to analyze the effect of the initial mole fraction and the initial pressure on the ED of the system

GLIDES is a promising energy storage technology that is amenable to crowded urban areas. Its scalability makes it suitable for a wide range of storage scales, from kWh to MWh, both behind and in-front of the meter. It is simple and requires no special training nor certifications to operate and maintain. The composition of the gas in compressed air storage is a key parameter in maximizing the energy density. A second key aspect is that one of the gaseous components should be condensable at some stage in the compression process.
To increase the energy density of GLIDES, air is substituted with a mixture of carbon dioxide and nitrogen. The phase change that the carbon dioxide undergoes contributes to the increase of energy density by allowing the utilization of more volume of the vessel to store energy while maintaining the maximum pressure below the maximum allowable limit. The nitrogen, being non-condensable under room temperature, contributes to increasing the energy density by increasing the total pressure inside the storage vessel above the saturation pressure of carbon dioxide, thereby enabling greater utilization of the vessel’s volume for energy storage. A model, based on the Redlich–Kwong equation of state, was presented to solve for the pressure and volume of the gas and to calculate the energy density for any combination of initial total pressure and initial total mole fraction of carbon dioxide. Maximum energy density was attained when the system is charged with a mixture of 88% carbon dioxide and 12% nitrogen by volume to an initial pressure of 73 bar. The maximum energy density attained was 7.3285 MJ/m3, 56.8% higher than the energy density of the system using only pure nitrogen. We conclude by making evident that the use of condensable gases is a valid method for significant improvement in energy storage density using moderate pressures. For future work, a search campaign will be conducted to identify a condensable/non-condensable pair that results in even higher energy density.

This research was funded by the Waterpower Technologies Office of the US Department of Energy.

This manuscript has been authored by UT-Battelle, LLC, under contract DE-AC05-00OR22725 with the US Department of Energy (DOE). The US government retains and the publisher, by accepting the article for publication, acknowledges that the US government retains a nonexclusive, paid-up, irrevocable, worldwide license to publish or reproduce the published form of this manuscript, or allow others to do so, for US government purposes. DOE will provide public access to these results of federally sponsored research in accordance with the DOE Public Access Plan (http://energy.gov/downloads/doe-public-access-plan). 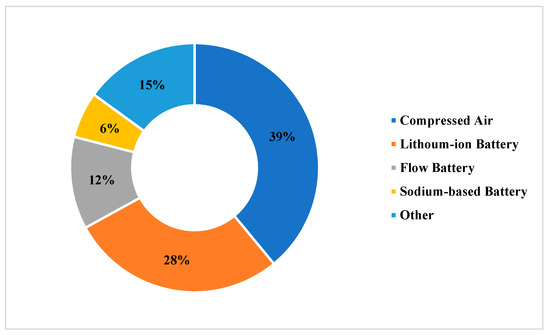 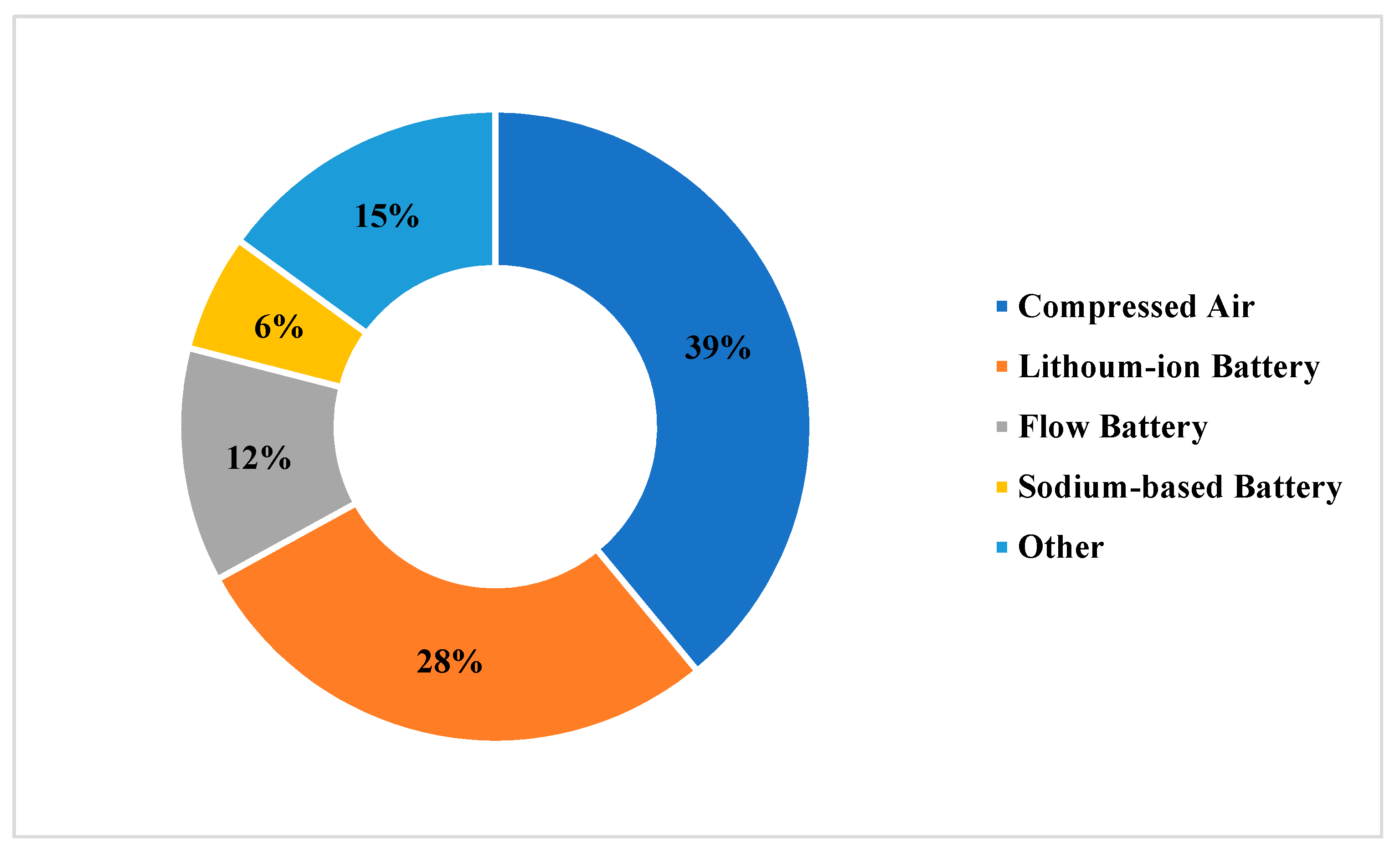 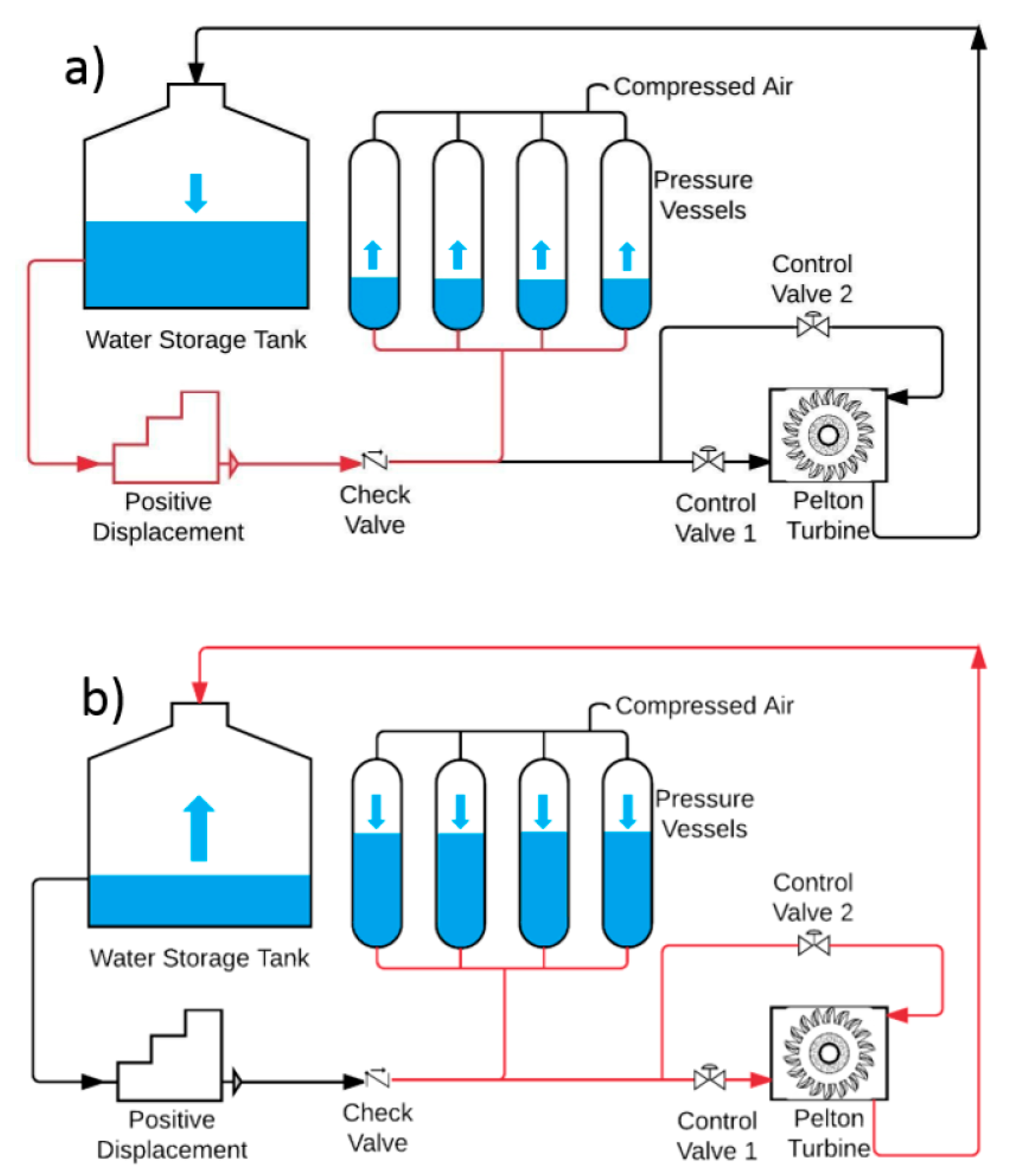 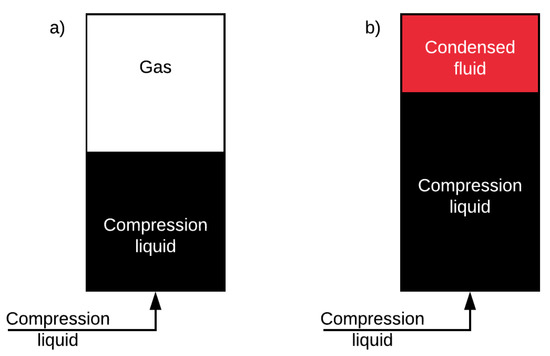 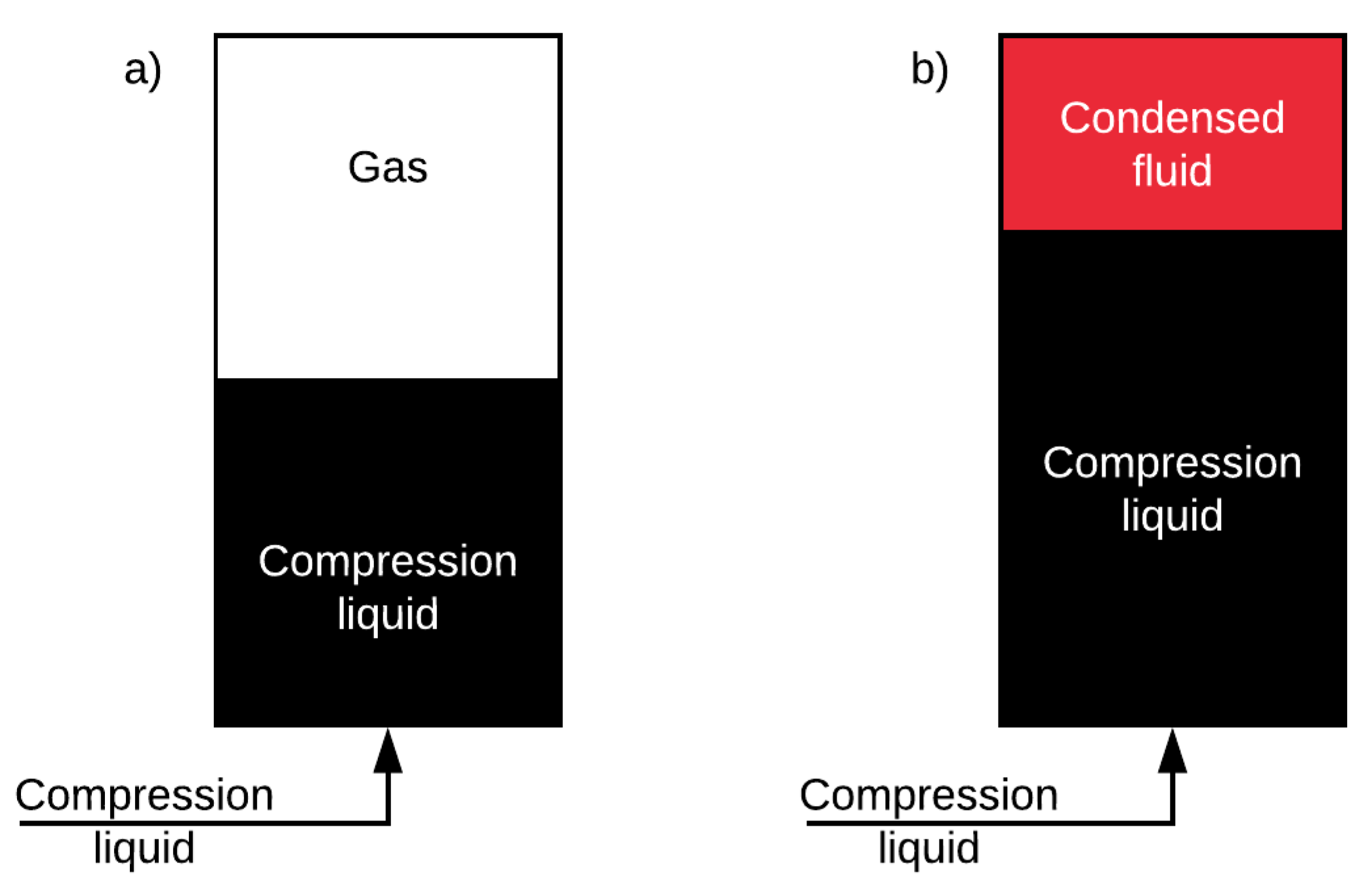 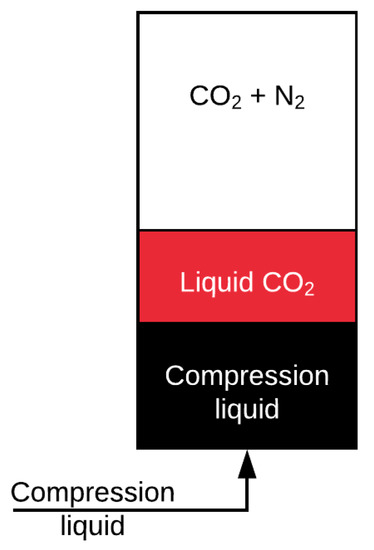 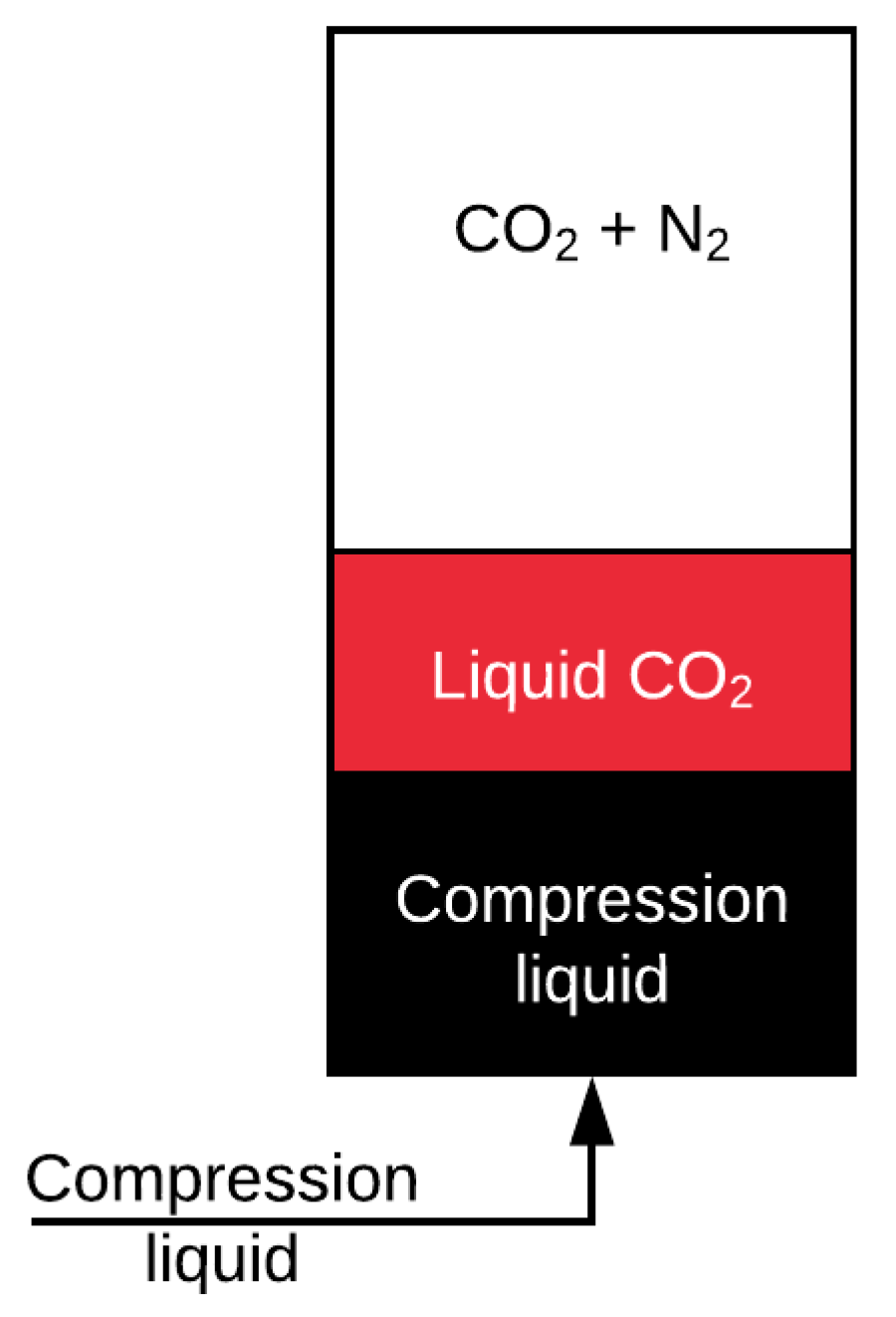 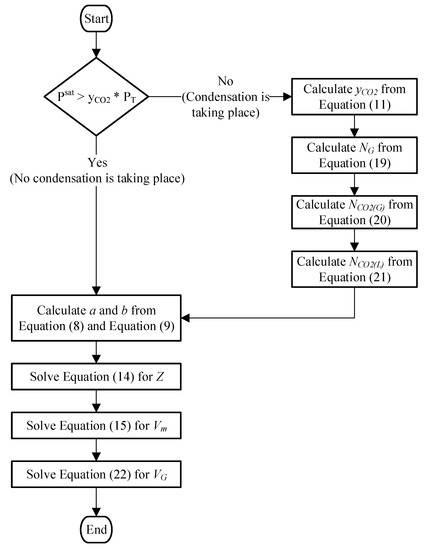 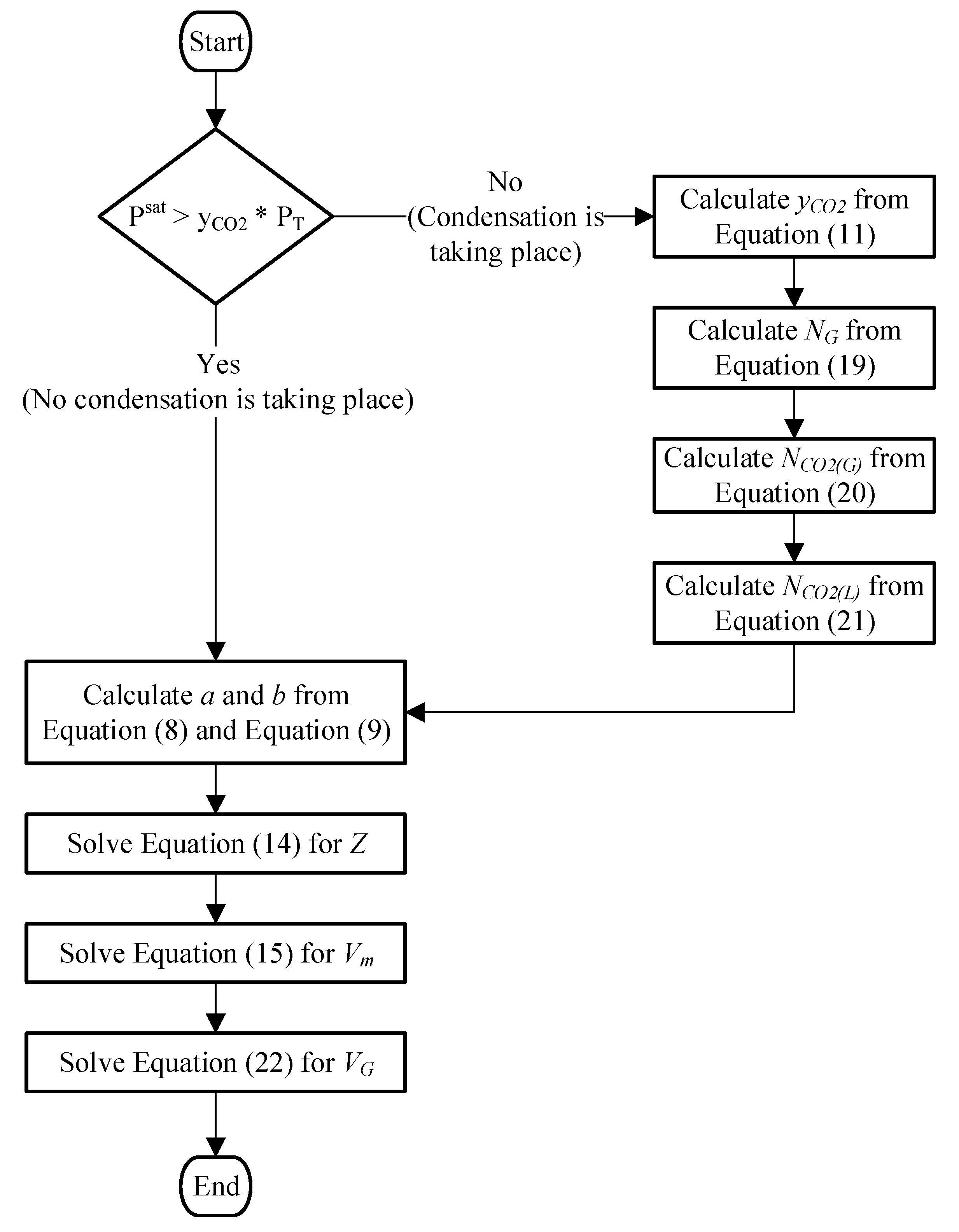 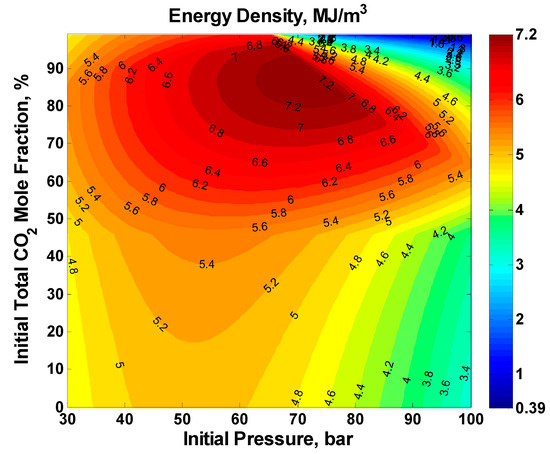 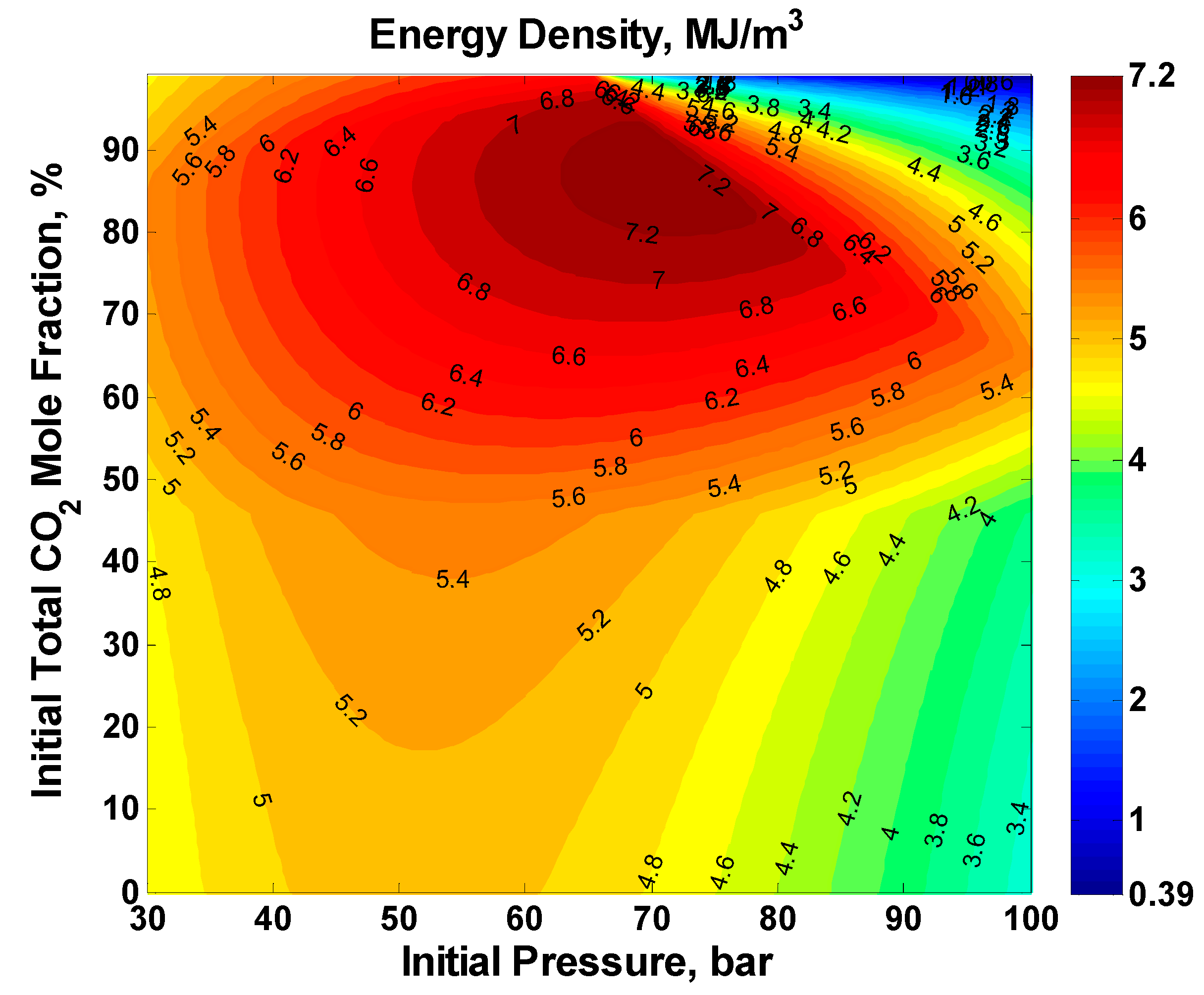 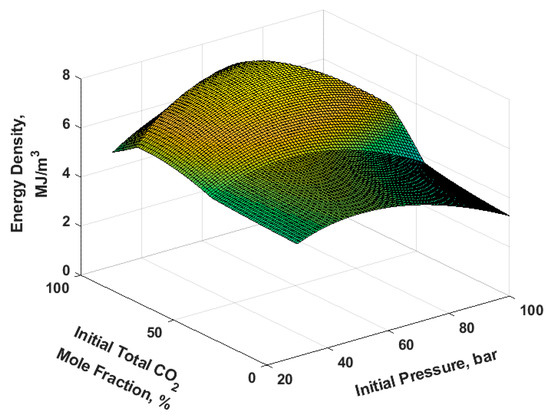 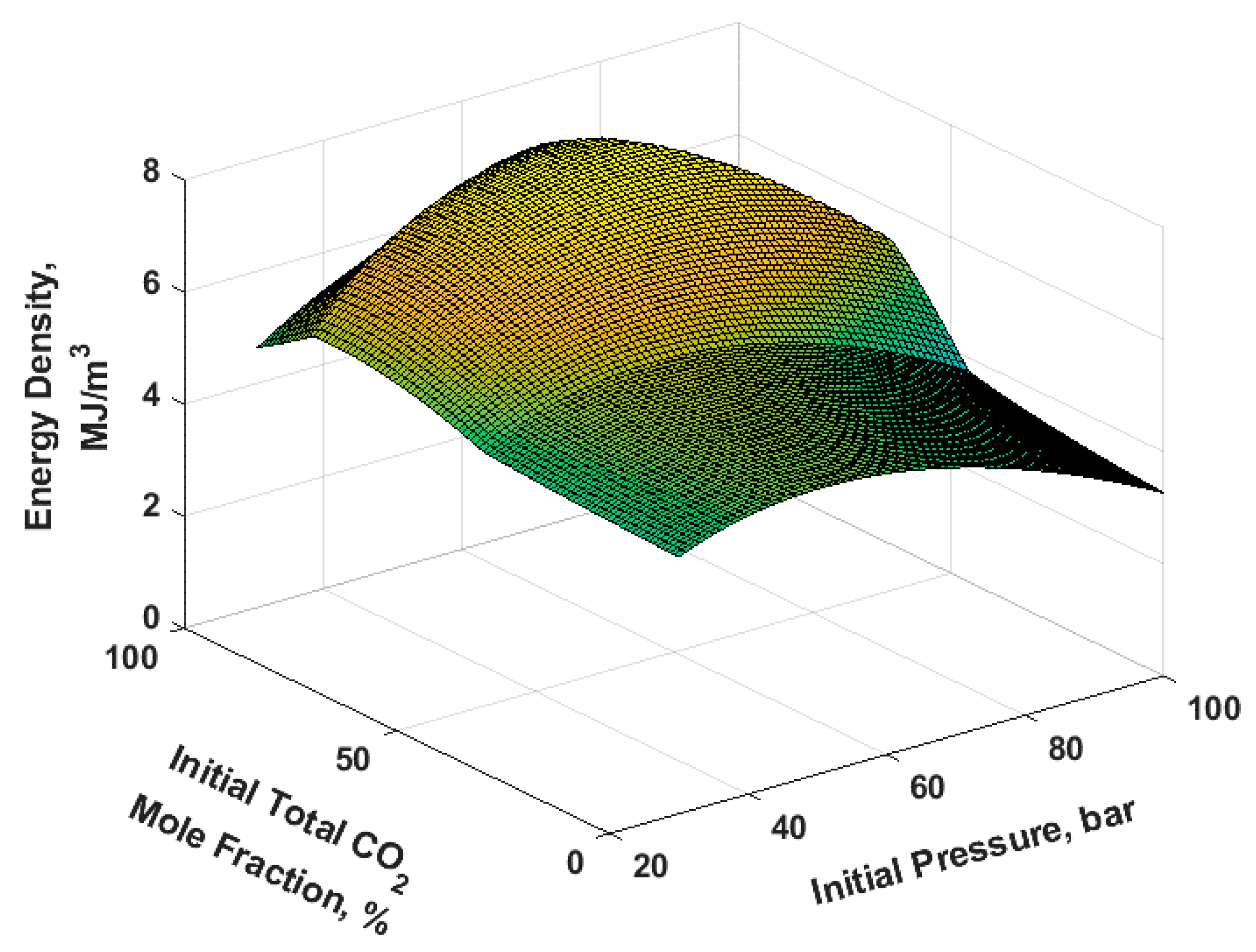 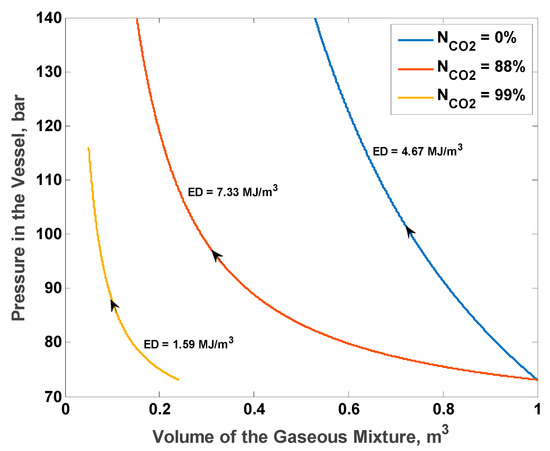 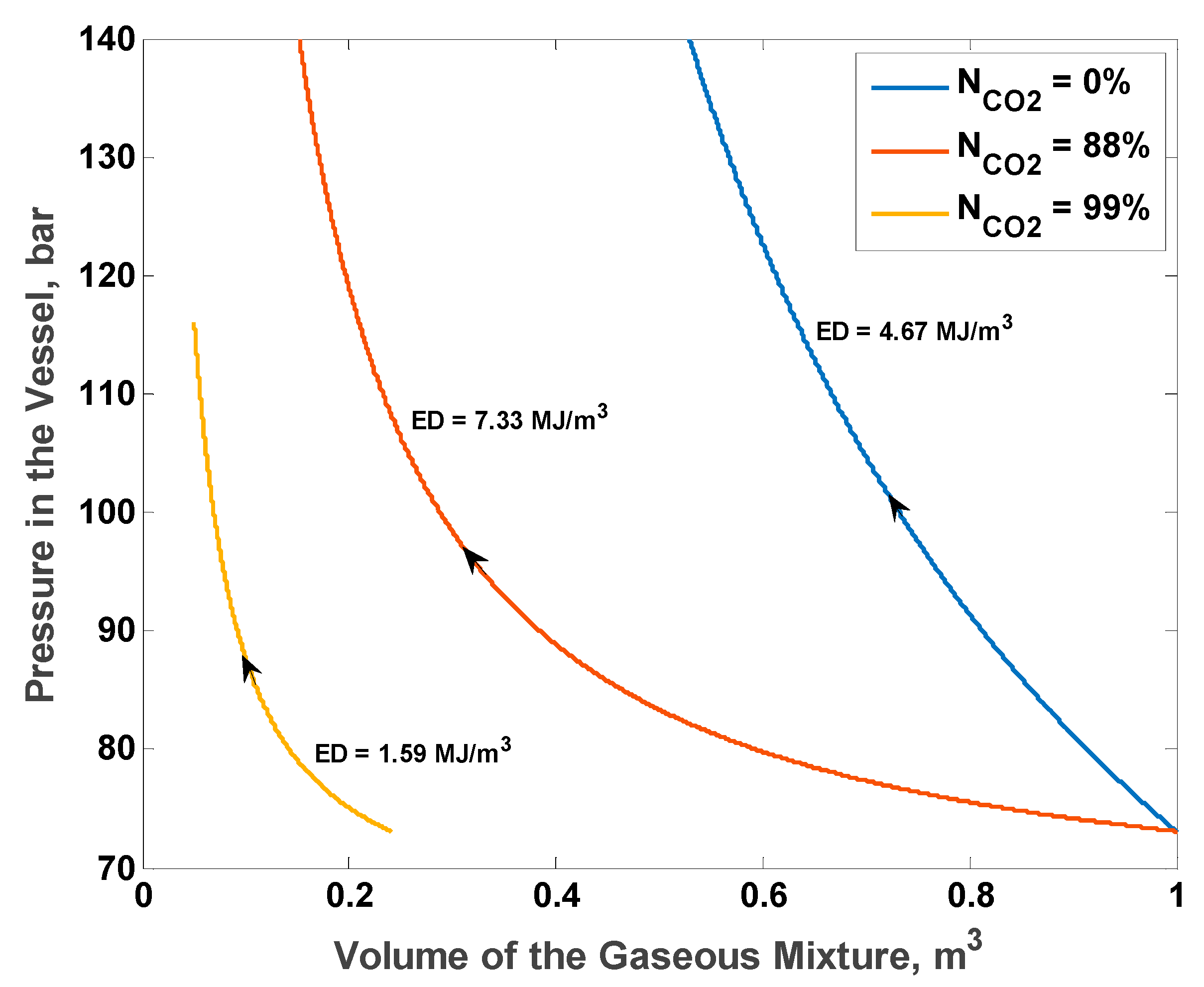 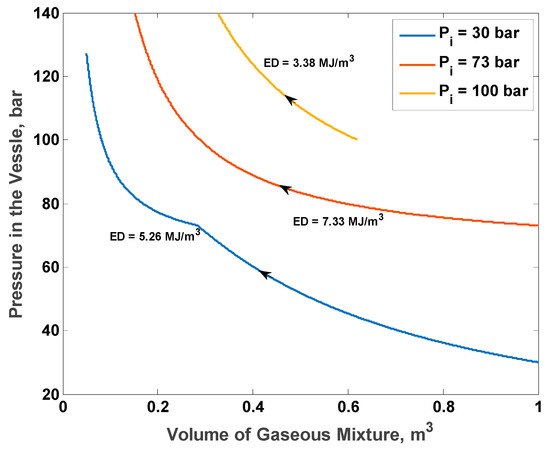 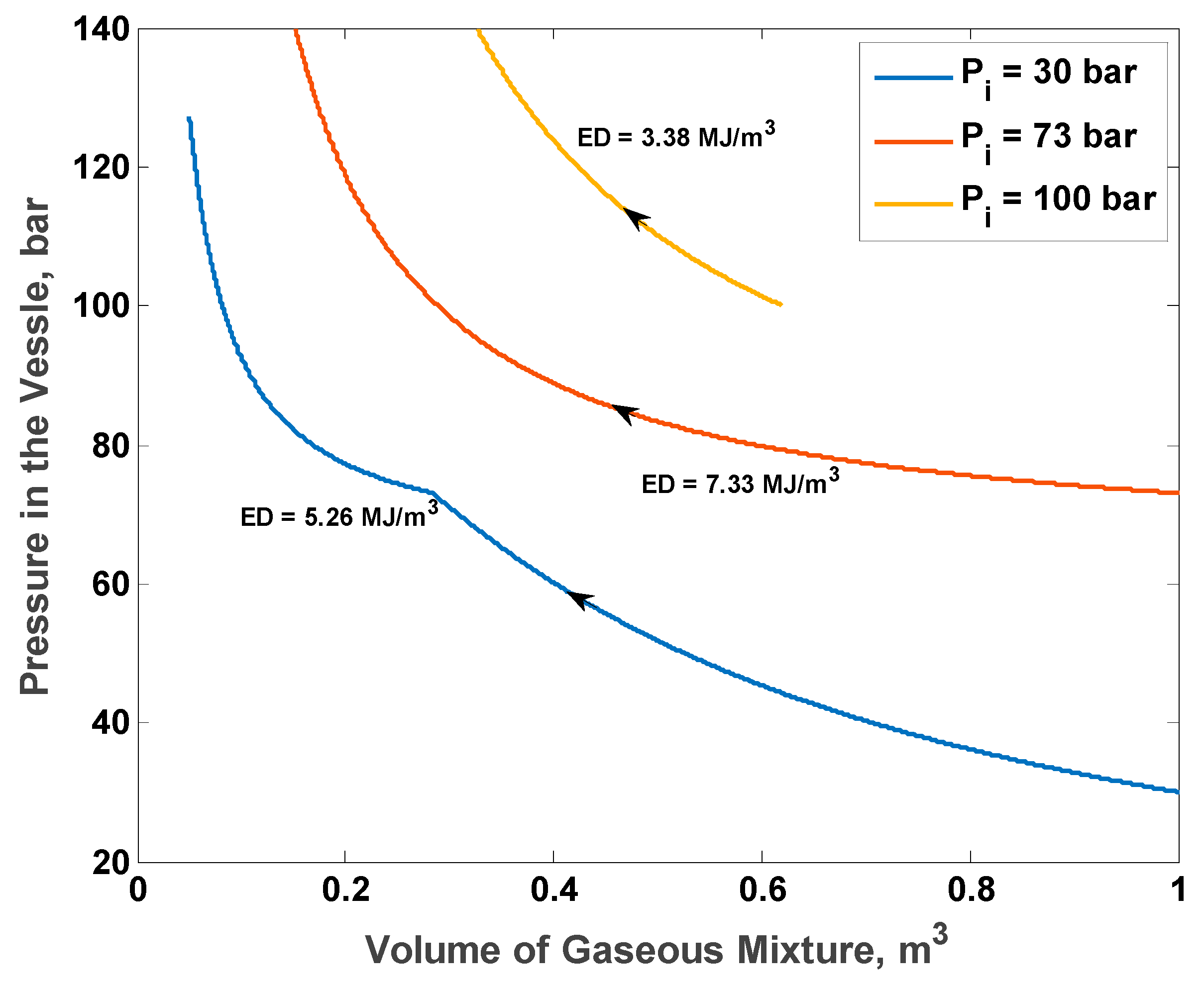