Explosion of Microbubbles Generated by the Alternating Polarity Water Electrolysis

Water electrolysis with a fast change of polarity generates a high concentration of bulk nanobubbles containing H and O gases. When this concentration reaches a critical value, a microbubble pops up, which is terminated quickly in an explosion process. In this paper, we provide experimental information on the phenomenon concentrating on the dynamics of exploding microbubble observed from the top and from the side. An initial bubble with a size of m expands to a maximum size of m for s and then shrinks in the cavitation process. The sound produced by the event is coming from two sources separated in time: exploding bubble and cavitating bubble. The observed dynamics supports expansion of the bubble with steam but not with H and O mixture. A qualitative model of this puzzling phenomenon proposed earlier is refined. It is demonstrated that the pressure and temperature in the initial bubble can be evaluated using only the energy conservation law for which the driving energy is the energy of the combusted gas. The temperature in the bubble reaches 200 C that shows that the process cannot be ignited by standard combustion, but the surface-assisted spontaneous combustion agrees well with the observations and theoretical estimates. The pressure in the microbubble varies with the size of the merging nanobubbles and is evaluated as 10–20 bar. Large pressure difference between the bubble and liquid drives the bubble expansion, and is the source of the sound produced by the process. Exploding microbubbles are a promising principle to drive fast and strong micropumps for microfluidic and other applications. View Full-Text
Keywords: microbubbles; combustion; nanobubbles; electrolysis; sound; microsystems microbubbles; combustion; nanobubbles; electrolysis; sound; microsystems
►▼ Show Figures 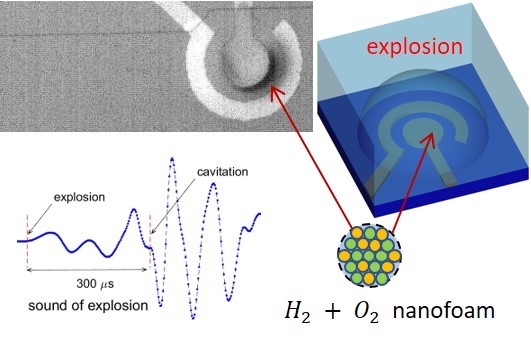