Two Birds, One Stone—Reframing Cooking Energy Policies in Africa and Asia
Next Article in Special Issue

In this section, we discuss the basic principle of the WR-ERSM for structural dynamic fuzzy reliability analysis as drawn in Figure 1.
As revealed in Figure 1, the process of structural dynamic fuzzy reliability analysis comprises analytical preparation, WR-ERSM modeling, sample extraction, safety criterion transformation and reliability analysis. The analytical preparation is to structure finite model (FE) model and set all constraint conditions, workloads and time domain. The objective of the samples’ extraction is to collect all input and output samples from dynamic deterministic analyses as one pool of samples for dynamic probabilistic analysis. Herein, the samples of random inputs are extracted by the full factorial design [29,30], and then the extrema of response processes are gained as new output responses based on dynamic deterministic analysis in the time domain of interest, and their weights are confirmed by a series of deterministic analyses with the acquired input samples and FE model. In the process of WR-ERSM modeling, the samples with larger weights, which include input samples and output samples, are chosen from the pool of samples as the fitting samples for the WR-ERSM modeling. When the fitting accuracy does not satisfy the requirements, the fitting samples are reselected to achieve the weighted values. Otherwise, the probability density functions (PDFs) of outputs are gained by MC method. The objective of safety criterion transformation is to transform the fuzzy safety criterion into a stochastic safety criterion based on the fuzzy entropy principle [31,32]. Lastly, structural dynamic fuzzy reliability analysis is performed to achieve the reliability degree considering the randomness of input variables and the fuzziness of safety criterion.

The ERSM was developed to evaluate structural dynamic reliability by considering the extremum values instead of all the output responses within the time domain of interest, and was proved to be efficient in terms of the efficiency improvement [18,33]. In other words, the random process of an output response in the time domain is transformed into a random variable as the ERSM is modeled. When y(x) denotes the extremum of output response within the time domain [0, T], corresponding to the input variables x = [x1, x2, …, xk]T, where k is the number of inputs, the ERSM model can be expressed as: in which A, B and C indicate constant term, linear term and quadratic term. B and C are denoted as: here i = 1, 2, …, k. Thus, the ERSM function can be rewritten as:
In this equation, the number of undetermined coefficients is 2k + 1. To compute these coefficients, we extract a series of input samples by the full factorial design method in Equation (4). where El (l = 1, 2, …, s) is the l-th sampling category, namely experimental condition, which is the rule of generated sample set of random variable with respect to both the mean μ and standard deviation σ; the subscripts i, j indicate the i-th and j-th random variables; the subscript s expresses the number of sampling types; f denotes the empirical coefficient which is usually selected from 1 to 3.
Based on structural dynamic deterministic analysis and the least square method [1,19,34], the output responses are then acquired by Equation (5).
The symbol v is the n × (k + 1) matrix of input variables, in which n is the number of samples; d is the vector of undetermined coefficients in the ERSM model.
In respect of the ERSM, the computational burden is effectively reduced in structural dynamic reliability evaluation. However, the modeling precision is still unacceptable because of the limitations of quadratic polynomials in processing the high non-linearity problem and large-scale parameters. To resolve this issue, this study develops the WR-ERSM with respect to the ERSM and WR. We adopt the ERSM to compute the global extreme value rather than all the values for the dynamic output responses under different input parameters in the time domain [0, T], and employ the WR to find the optimal parameters in the process of the ERSM modeling.
The comparison of the ERSM and the WR-ERSM are shown in Figure 2. The ERSM model (indicated by the red dotted curve) is established by all the samples based on the least square method. For the WR-ERSM modeling (denoted by the blue solid curve), we first apply the WR to select the efficient samples (annotated by the blue dots) with larger weights from the pool of n samples, to determine the undetermined coefficients and gain the WR-ERSM model. This method is termed the weighted least square method.
Regarding the ERSM model (Equation (1)), the WR-ERSM model yWR(x) is structured as: where AWR, BWR and CWR are the weighted constant, weighted linear vector and weighted quadratic matrix, respectively. BWR and CWR are denoted as
To intuitively express the WR-ERSM model, the Equation (6) is written as quadratic polynomial, i.e., in which aWR, bWR,i and cWR,i are the weighted coefficient of A, B and C, respectively.
To determine these weighted coefficients in Equation (8), we first need to search the minimum of output responses yobj(x) with respect to n samples, the weighted values are then obtained by dividing the minimum value yobj(x) from all the output responses ytrue(x), which are ensured by dynamic deterministic analysis with the FE model. The m efficient samples with larger weights are selected from this pool of n samples, and the weighted matrix w is restructured. The related formulas are: here j = 1, 2, …, n; ytrue, j(x) indicates the true value of the j-th output response; wj is the weighted value of the j-th sample; m (m ≥ (2k + 1)) is the number of efficient samples.
We confirm the undetermined coefficients of WR-ERSM model, i.e., where dWR denotes the vector of undetermined coefficients in the WR-ERSM model; vWR is the matrix of efficient samples; yWR is the output response corresponding to the efficient samples. dWR, vWR and yWR are structured as:
Based on the above analysis, we can derive the WR-ERSM model.

In this section, we regarded the dynamic fuzzy reliability analysis of an aeroengine turbine blisk as one case to verify the feasibility and effectiveness of the proposed WR-ERSM algorithm.

3.2. The WR-ERSM Model of Turbine Blisk

To achieve the surrogate model of turbine blisk, the factors (parameters) impacting the analytical results are selected as the random input variables as listed Table 1, including inlet velocity, inlet pressure, material density and angular speed.
As revealed in Table 1, the mean μ of the random input variables is determined within the time domain by using the extremum selection method [42]. To establish the WR-ERSM model of turbine blisk, the samples are extracted from the random inputs and outputs at the selected calculation points by the full factorial design in Equation (4). The weighted values of output responses are calculated by Equation (5). The 40 samples are listed in Table 2.
Based on 20 groups of samples with larger weights underlined in Table 2, the coefficients of Equation (8) are acquired, and then the WR-ERSM model of turbine blisk is
Let the response y(x) in Equation (18) obey a normal distribution, the dynamic fuzzy reliability analysis of turbine blisk is accomplished with the MC method. The simulation histories and stress histograms of turbine blisk are drawn in Figure 10 and Figure 11, respectively.
As shown in Figure 11 and Figure 12, the histogram of turbine blisk stress obeys a normal distribution with the mean value μz = 9.669 × 108 Pa and standard deviation σz = 5.743 × 106 Pa. Moreover, in light of Equation (16), the built model in Equation (18) is rewritten as the PDF, i.e.,

In this section, the proposed WR-ERSM is verified by the comparison with the MC method, ERSM based on least-square and equivalent stochastic transformation method (ESTM).

To improve the computational accuracy and efficiency of structural dynamic fuzzy reliability analysis, we present the weighted regression-based extremum response surface method (WR-ERSM) based on the extremum response surface method (ERSM) and weighted regression (WR), for structural dynamic fuzzy reliability analysis. Through this study, some conclusions are summarized as follows:

(1)
The WR-ERSM is highly precise and efficient in structural dynamic reliability evaluation, since ERSM has the capacity of processing the transient problem;
(2)
The WR approach can improve modeling accuracy so that the proposed WR-ERSM possesses high fitting efficiency and accuracy, due to the requirement of small samples;
(3)
WR-ERSM possesses good simulation performance in structural dynamic fuzzy reliability evaluation, as the fuzzy safety criterion is considered to improve the precision;
(4)
The change rule of turbine blisk structural stress from start to cruise for an aircraft is acquired with the maximum value of structural stress at t = 165 s and the reliability degree (Pr = 0.997) of the turbine blisk.
(5)
The efforts of this study provide a promising method for the dynamic reliability analysis and evaluation of complex structures with respect to the working process.

The authors declare that there is no conflict of interests regarding the publication of this article. 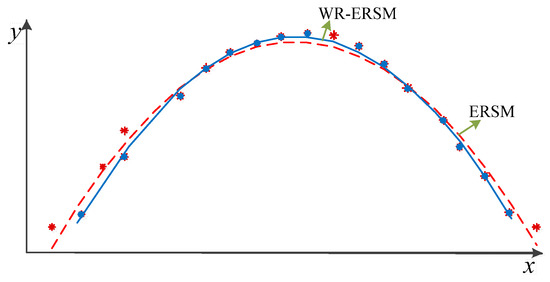 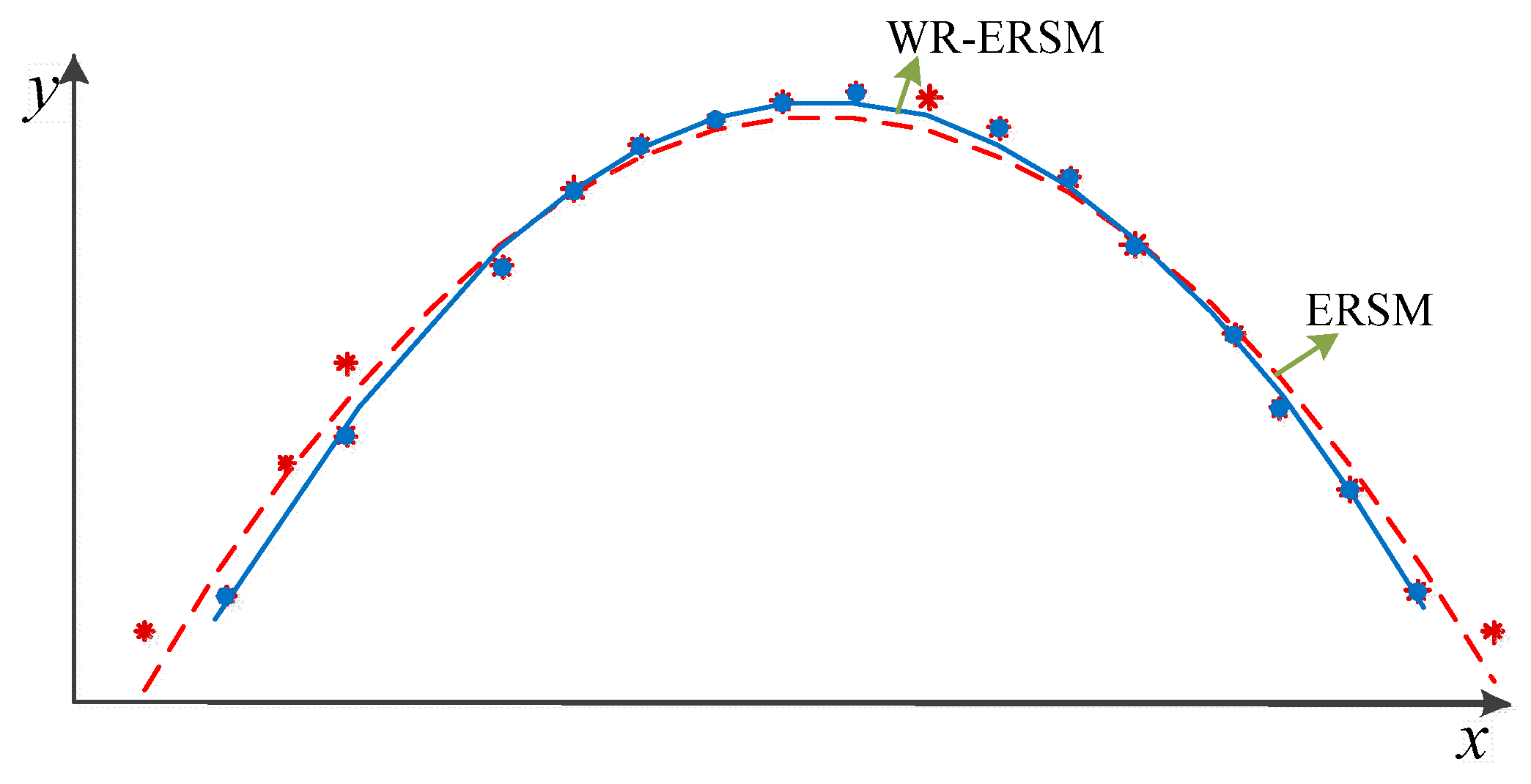 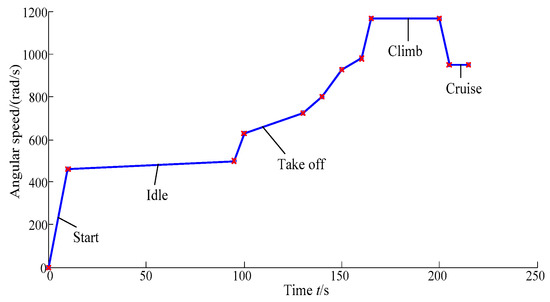 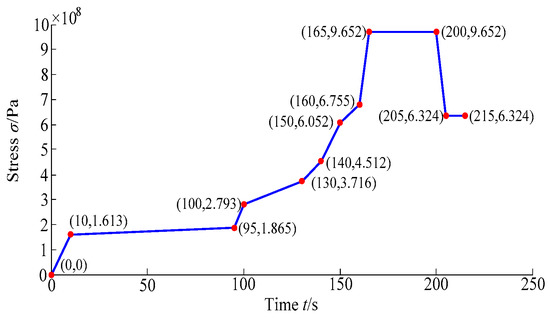 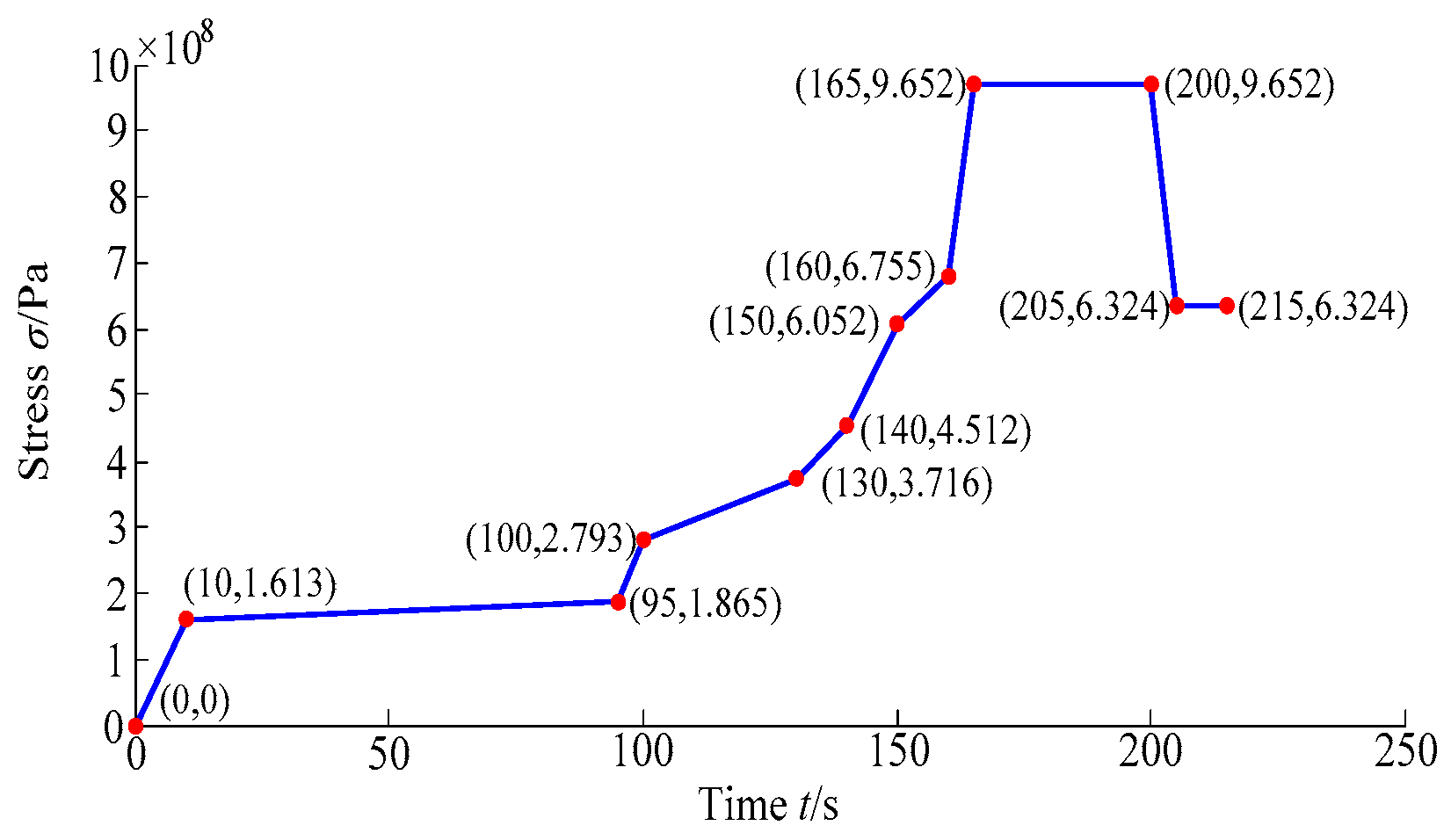 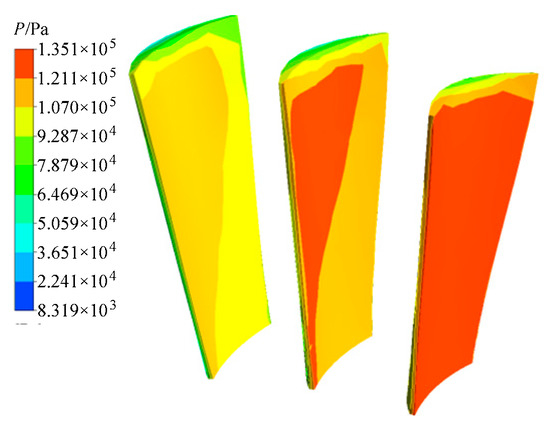 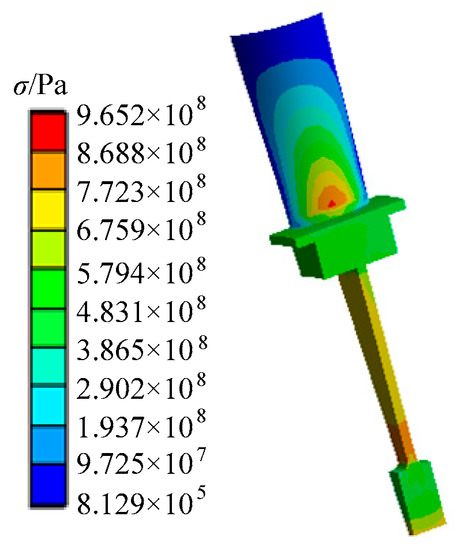 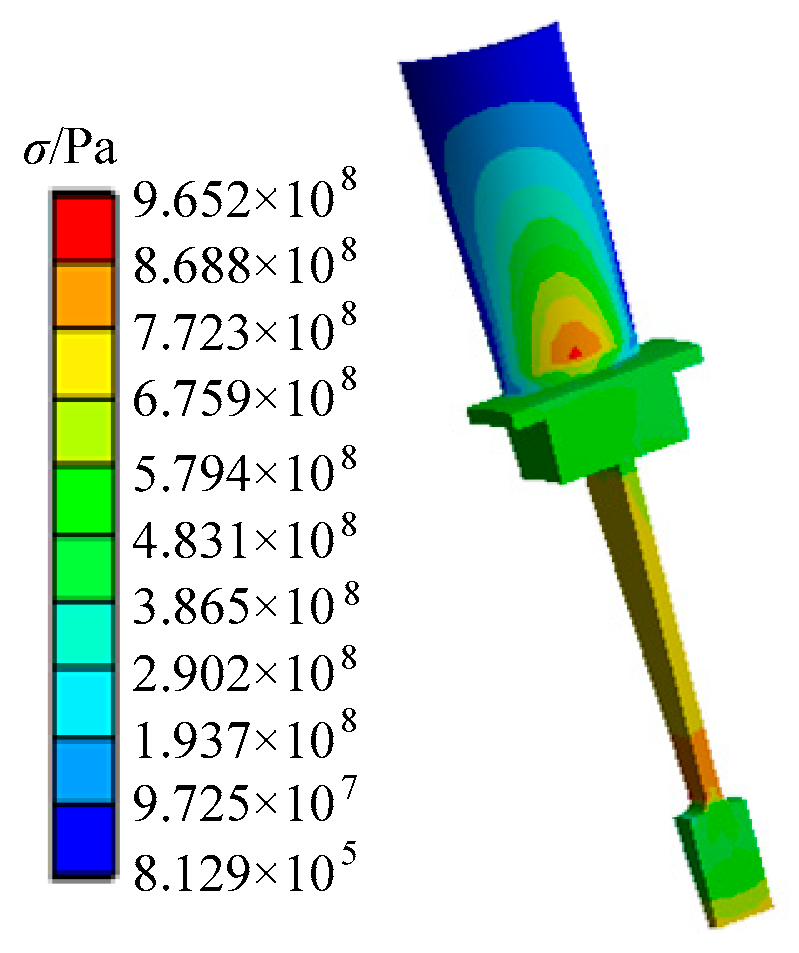 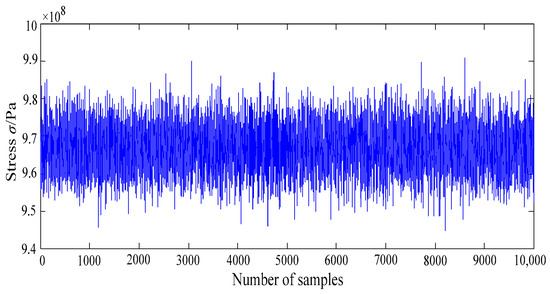 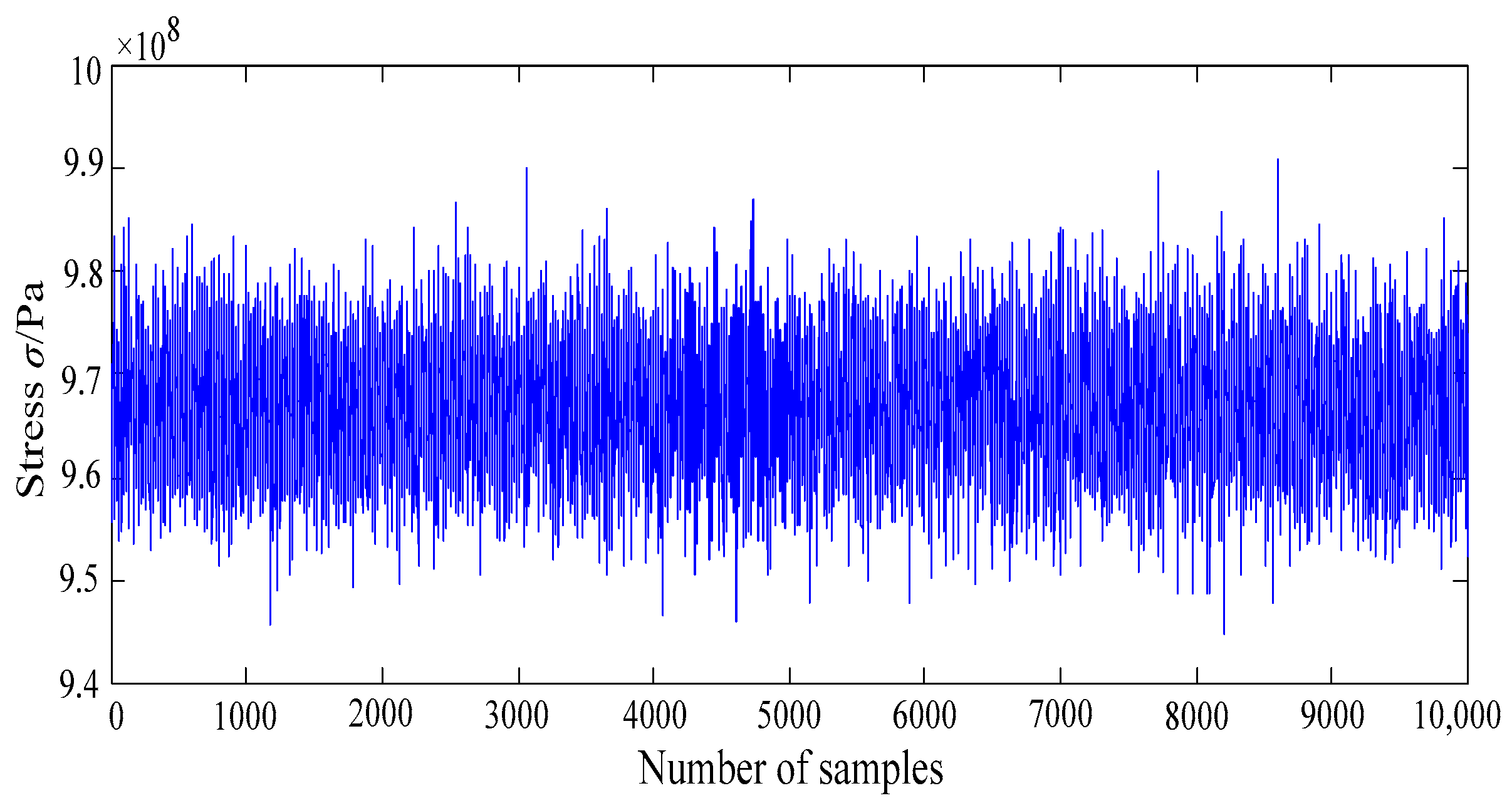 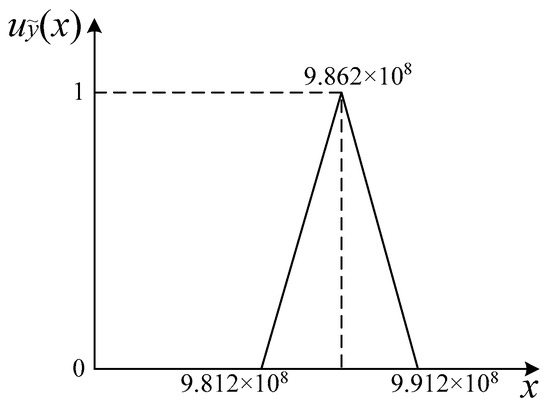