It is known that biogas without prior purification to biomethane is a commonly used fuel only for the stationary internal combustion engines but not for vehicle engines. The current study evaluates the use of biogas without its prior upgrading to biomethane as fuel for tractor engines. The following tests were carried out: biochemical methane potential tests, dynamometer engine tests, and field tests with the use of a tractor. The average methane content in biogas obtained from vegetable wastes exceeded 60%. The tests performed on the engine dynamometer showed that the engine powered by dual fuel worked stably when diesel was replaced by 40% biogas (containing 50% of CO2) or 30% methane. Dual fuel supplying of the engine caused an increase in the concentration of hydrocarbons and carbon monoxide in the exhaust gases and a decrease or no effect in the concentration of particulate matter and nitrogen oxides. It did not significantly affect the dynamics of the vehicle and its useful properties. Biogas that contains a maximum of 50% CO2 and from which H2S, moisture, and siloxanes have been largely removed, is suitable as a fuel for tractors. Such biogas can be obtained in biogas plants from different substrates, e.g., vegetable or agriculture wastes as well as biodegradable municipal wastes. View Full-Text
Keywords: biogas; dual fuel engine; knocking combustion; exhaust gas emissions biogas; dual fuel engine; knocking combustion; exhaust gas emissions
►▼ Show Figures 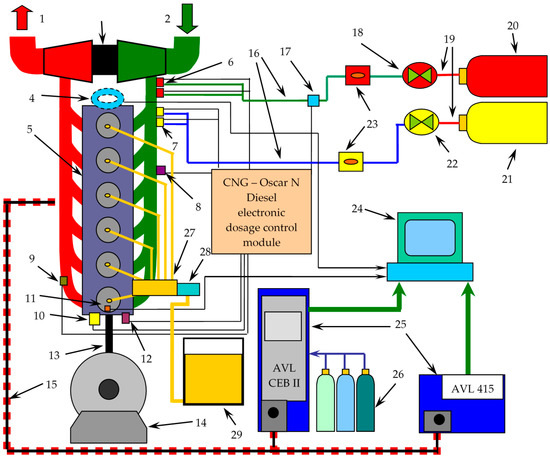