A limited number of studies have examined the effect of dual-fluid heat exchangers used for the cooling of photovoltaic (PV) cells. The current study suggests an explicit dynamic model for a dual-fluid photovoltaic/thermal (PV/T) system that uses nanofluid and air simultaneously. Mathematical modeling and a CFD simulation were performed using MATLAB® and ANSYS FLUENT® software, respectively. An experimental validation of the numerical models was performed using the results from the published study. Additionally, to identify the optimal nanofluid type for the PV/T collector, metal oxide nanoparticles (CuO, Al2O3, and SiO2) with different concentrations were dispersed in the base fluid (water). The results revealed that the CuO nanofluid showed the highest thermal conductivity and the best thermal stability compared to the other two nanofluids evaluated herein. Furthermore, the influence of CuO nanofluid in combination with air on the heat transfer enhancement is investigated under different flow regions such as laminar, transition, and turbulent. Using a CuO nanofluid plus air and water plus air the total equivalent efficiency was found to be 90.3% and 79.8%, respectively. It is worth noting that the proposed models could efficiently simulate both single and dual-fluid PV/T systems even under periods of fluctuating irradiance. View Full-Text
Keywords: dual-fluid PV/T; nanofluid; numerical study; model validation dual-fluid PV/T; nanofluid; numerical study; model validation
►▼ Show Figures 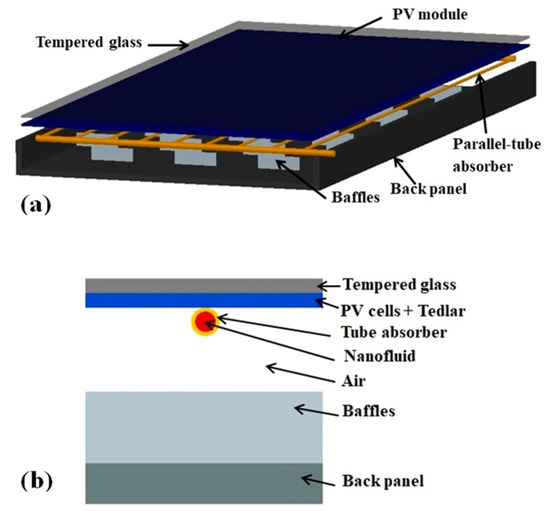