Control Design, Stability Analysis and Experimental Validation of New Application of an Interleaved Converter Operating as a Power Interface in Hybrid Microgrids
Previous Article in Journal

Akin to a public good, emissions reduction suffers from the ‘free rider’ syndrome. Although many countries claim that they are meeting their greenhouse gas (GHG) emissions reduction commitments, the average global temperature and GHG emissions continue to rise. This has led to growing speculation that some countries may be taking advantage of the system by effectively exploiting a range of loopholes in global agreements. Using a case study approach, we critically review the evidence from Australia, exploring how Australia has participated in global climate change negotiations and the way in which this emissions intensive country’s national emissions reduction obligations have been met. The findings suggest that: (1) successful negotiation to include Article 3.7 (‘Adjusting the 1990 Baseline’ or ‘the Australia Clause’) in the Kyoto Protocol significantly favored Australia’s ability to meet its First Kyoto Commitment (2008–2012); and (2) successful bargaining for the accounting rule that allowed carbon credits from the first commitment period to be carried over to the second commitment period of the Kyoto Protocol benefitted Australia by 128 MtCO2e. At the national level, a lack of bipartisan political support for an effective mechanism to drive emissions reduction has also been problematic. While the introduction of the Carbon Pricing Mechanism (CPM) in 2012 reduced emissions from electricity production from about 199.1 MtCO2e to 180.8 MtCO2e in 2014, a change of government led to the abolition of the CPM in 2014 and emissions from electricity production subsequently rose to 187 MtCO2e in 2015 and 189 MtCO2e in 2016 with adverse impacts in many sectors as well as Australia’s overall emissions. The current Australian government continues to undermine its commitment to mitigation and the integrity and credibility of its own emissions reductions policy, introducing a softer ‘calculated baseline’ for its own Safeguard Mechanism, which allows companies to upwardly adjust their calculated baselines on the basis of their highest expected emissions, permitting emissions in excess of their historical emissions. While disappointing in the context of the global emissions reduction project, Australia’s actions are sadly not unique and we also provide examples of loopholes exploited by countries participating in a range of other negotiations and emissions reduction projects. Such strategies undoubtedly serve the short-term political and economic interests of these countries; however, it is increasingly apparent that the cumulative impact of such tactics will ultimately impact the entire global community. View Full-Text
Keywords: Kyoto protocol; nationally determined contribution; clean development mechanism; Australia Kyoto protocol; nationally determined contribution; clean development mechanism; Australia
►▼ Show Figures 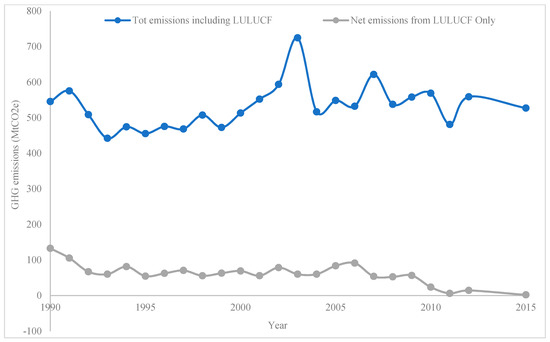