The purpose of the present paper is to investigate the micropolar nanofluid flow on permeable stretching and shrinking surfaces with the velocity, thermal and concentration slip effects. Furthermore, the thermal radiation effect has also been considered. Boundary layer momentum, angular velocity, heat and mass transfer equations are converted to non-linear ordinary differential equations (ODEs). Then, the obtained ODEs are solved by applying the shooting method and in the results, the dual solutions are obtained in the certain ranges of pertinent parameters in both cases of shrinking and stretching surfaces. Due to the presence of the dual solutions, stability analysis is done and it was found that the first solution is stable and physically feasible. The results are also compared with previously published literature and found to be in excellent agreement. Moreover, the obtained results reveal the angular velocity increases in the first solution when the value of micropolar parameter increases. The velocity of nanofluid flow decreases in the first solution as the velocity slip parameter increases, whereas the temperature profiles increase in both solutions when thermal radiation, Brownian motion and the thermophoresis parameters are increased. Concentration profile increases by increasing and decreases by increasing .
Keywords: micropolar nanofluid; partial slips; dual solutions; shrinking/stretching surface; shooting method micropolar nanofluid; partial slips; dual solutions; shrinking/stretching surface; shooting method

The boundary flow and heat transfer phenomena of all types of fluids have remained of great interest for many researchers, especially for purpose of the practical implementation. Originally, fluids are classified into Newtonian and non-Newtonian fluids. There are many industrial applications of non-Newtonian fluids, such as drilling mud, polycrystal melts, oils, certain paints, volcanic lava, cosmetic product, fluid suspensions, molten polymers and food product, etc. There are many mathematical models for various constitutive equations that deal with flow phenomena with different parameters. Among such models, the micropolar fluid model is one of the non-Newtonian models introduced by Eringen [1]. This model deals with the flow of the micropolar fluids, whereas some examples of the micropolar fluids are liquid crystals with rigid molecules, suspensions or colloidal solutions, some biological fluids, exocytic lubricants and the blood of the animals, etc. In many industries, fluids are used for heat transport purposes, but common fluids are weak source of the heat transport. So, with development of nanotechnology, in the field of fluid mechanics, Choi and Eastman [2] introduced a new kind of modern fluid that could suspend the solid nanoparticles into common base fluids, later named as nanofluid. Nanofluids possess high thermal conductivity as compared to all concerned host fluids. Nanofluids is a sub-class of the modern rapidly growing field of nanoscience and technology.
Several practical problems have been discussed by many researchers in order to enhance thermal conductivity for the last many years. There are two well-known models that support transport phenomena of nanofluids, which are the Tiwari and Das model [3] and Buongiorno’s model [4]. It should be noted that Buongiorno’s model is considered a two-phase non-homogeneous model in which the slip velocity of the base fluid and nanoparticles are not equal to zero. This model contains seven slip parameters, including diffusiophoresis, inertia, fluid drainage, gravity, Brownian motion, Magnus and thermophoresis [5]. On the other hand, the Tiwari-Das model is one of the single-phase (homogeneous) models in which the thermophysical characteristics of the base fluid are improved with the impact of nanoparticles allied with viscosity and thermal conductivity. Many researchers considered these two models to study all types of nanofluids as well as micropolar nanofluids, such as Hsiao [6], Lund et al. [7,8], Hashemi et al. [9], Hussain et al. [10], Dero et al. [11,12,13], Alarifi et al. [14] Pourfattah et al. [15], Alsarraf et al. [16], Jafarimoghaddam et al. [17,18], and Pal and Mandal [19]. Further work on nanofluid is referenced in [20,21,22]. In the present research, Buongiorno’s model is considered in order to develop the mathematical model for boundary layer micropolar nanofluid flow with slip parameters and radiation effect. It is observed that a little attention is given to this model for the case of existing multiple solutions in flow of the micropolar nanofluid.
The velocity, temperature and concentration slip factors may exist in case of rising the relative difference among velocity, temperature and the concentration entities. Awais et al. [23] studied the different slip conditions on a stretching sheet. They stated that if the temperature in the fluid flow is controlled by the thermal slip parameter then there is the possibility the concentration may also be controlled through transport phenomena of mass transfer. Das [24] examined the velocity slip on micropolar viscous fluid and found the increasing value of the velocity slip parameter will decrease the velocity as well as the thickness of the boundary layer. Ramya et al. [25] considered the nanofluid with thermal and velocity slip parameters. Some studies of micropolar nanofluid with different slip conditions can be found in [26,27,28,29].
It has been observed in previous literature that the work on the non-Newtonian nanofluid flow is very limited. Therefore, in present research work, a non-Newtonian micropolar nanofluid is considered by using a two-phase model. There study of Hayat et al. [30] examined the two-dimensional incompressible micropolar nanofluid flow over a linearly stretching/shrinking sheet with velocity, thermal and concentration slip effects. To the best of the author’s knowledge, the multiple similarity solutions with stability analysis of micropolar nanofluid flow on a permeable stretching and shrinking surface along the velocity, thermal and the concentration slip effects have not been studied by any other researcher in the past years. Thus, the purpose of the present work is to determine the multiple similarity solutions with stability analysis of the micropolar nanofluid flow with thermal radiation and slip effects. Buongiorno’s model is used due to its novelty of thermophoresis and Brownian motion of small particles. Furthermore, numerical solutions have been obtained by applying the shooting technique with shootlib function in the Maple software. There has been stability analysis performed in order to determine the stable solution with the help of BVP4C solver. The graphical results of different applied parameters are illustrated in the discussions. Furthermore, the physical behaviors of the skin friction coefficient, and the local Nusselt and Sherwood number are discussed. The main focus of this paper is to determine the multiple similarity solutions with stability analysis of micropolar boundary layer nanofluid and to understand the behavior of different parameters in the flow and heat transfer characteristics. It is expected that the present study will help those researchers interested in multiple similarity solutions with stability analysis in micropolar nanofluid flows.

Two-dimensional incompressible micropolar nanofluid flow through a linearly shrinking and stretching surfaces with velocity, thermal and concentration slip effects are shown in Figure 1 Furthermore, the effects of Brownian motion and the thermophoresis have been considered in Newtonian heat and concentration equations with thermal radiation effect. By using the above-mentioned assumptions as well as boundary layer approximations, the system of governing equations of micropolar boundary layer nanofluid flow will be written as:
Subject to boundary conditions
Where and represent velocity components in the directions of the -axis and -axis, respectively. While , , , and are kinematic energy, fluid density, vortex viscosity, angular velocity, spin gradient viscosity and micro-inertia density, respectively. Furthermore, , , , , , , , and are temperature, thermal diffusivity of nanofluid, mean absorption coefficient, Stefan–Boltzmann constant, ratio of effective heat capacity of nanoparticles of solid material to the heat capacity of fluid, thermophoretic diffusion coefficient, coefficient of Brownian diffusion, free stream temperature and concentration field, respectively. is mass flux velocity, is shrinking/stretching velocity of surface and is shrinking/stretching parameter where indicates shrinking surface while indicates stretching surface and are the velocity, heat transfer and the concentration slip parameters, respectively.
The following similarity variables are applied to determine the similarity solutions of the problem.
By using similarity transformations (7) in Equations (1)–(5), the following ODEs are obtained, subject to boundary conditions where, prime indicates differentiation with respect to the variable , is the micropolar material parameter, is a Prandtl number, is thermal radiation parameter, is a Brownian motion parameter, is a thermophoresis parameter and is the Schmidt number. Moreover, is the suction parameter (), is a velocity slip, is a thermal slip and is concentration slip parameters. It should be noted that the values of show that the microelements are closed to surface with a strong concentration, which means the particles are not rotatable. In the same manner, shows that the concentration is week due to vanishing of the anti-symmetric part of the stress tensor. In addition, specifies the turbulent boundary layer flow model of Ramzan et al. [31].
Quantities of the physical interests are the coefficient of the skin friction , local Nusselt number and Sherwood number that are stated as,
Using Equation (7) in (13), it is obtained where is a local Reynolds number.

The steady two-dimensional laminar boundary layer flow of micropolar nanofluid over a linearly shrinking/stretching surface has been studied with the effects of thermal radiation and slip parameters. The governing equations of micropolar nanofluid flow are transformed to ordinary differential equations by applying similarity transformations. The equations are solved by the shooting method in the Maple software. The effects of the different physical parameters involved in the system of the equations were suction, micropolar material, radiation, Brownian motion, thermophoresis parameters, and the slip parameters. The main findings of this study are as follows: 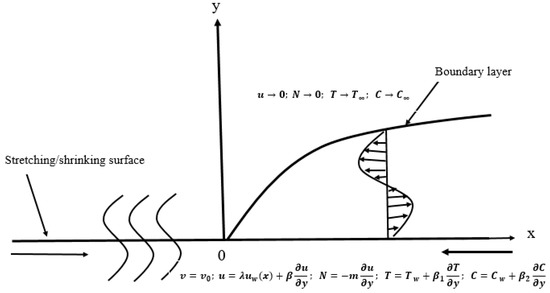 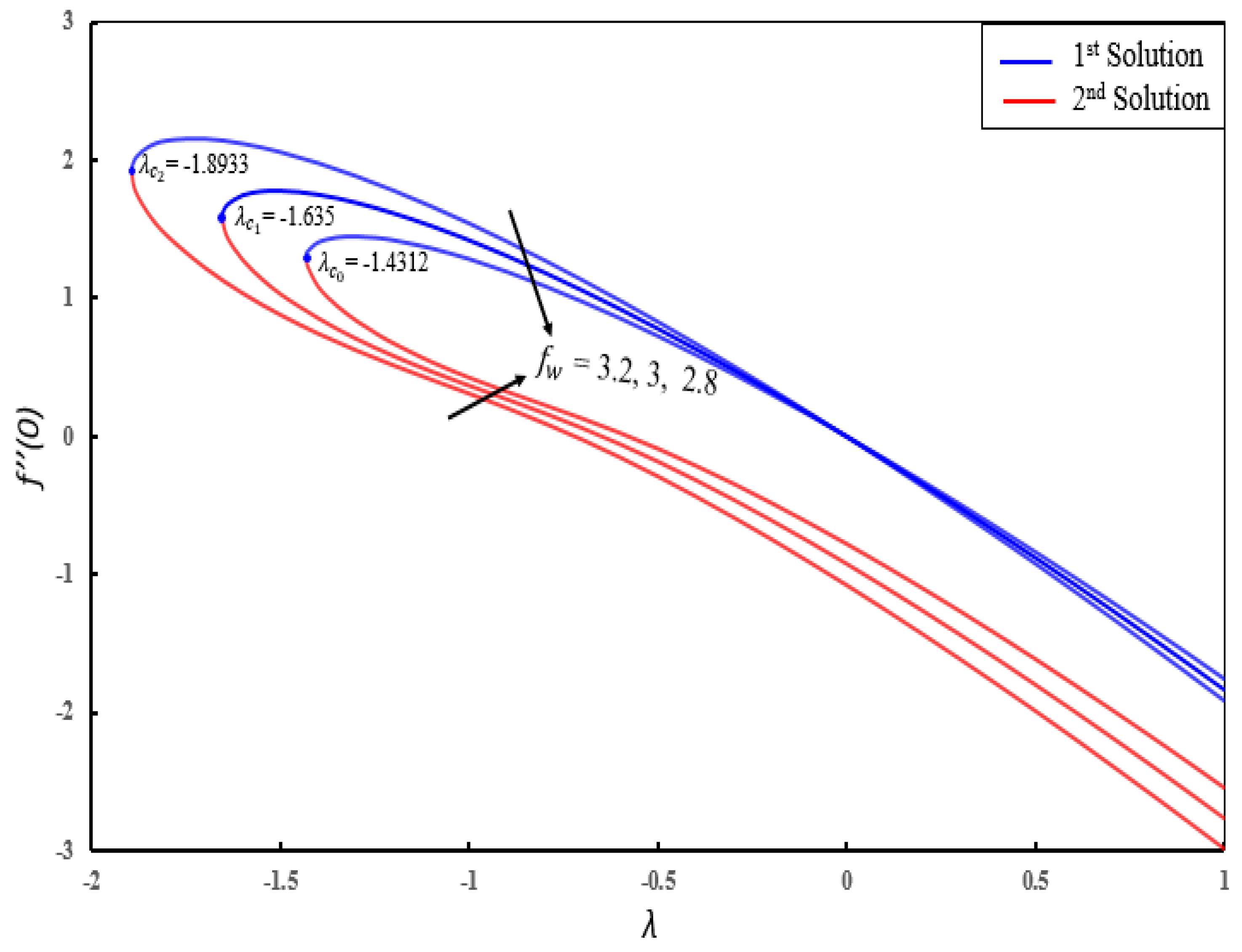 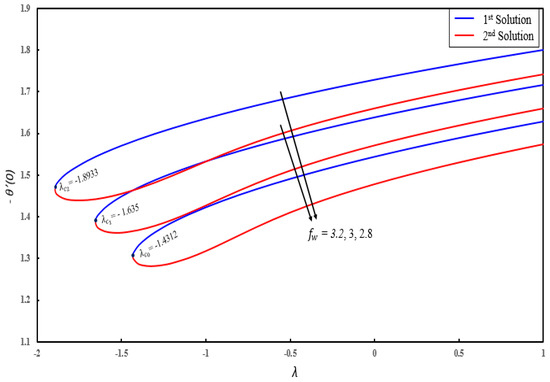 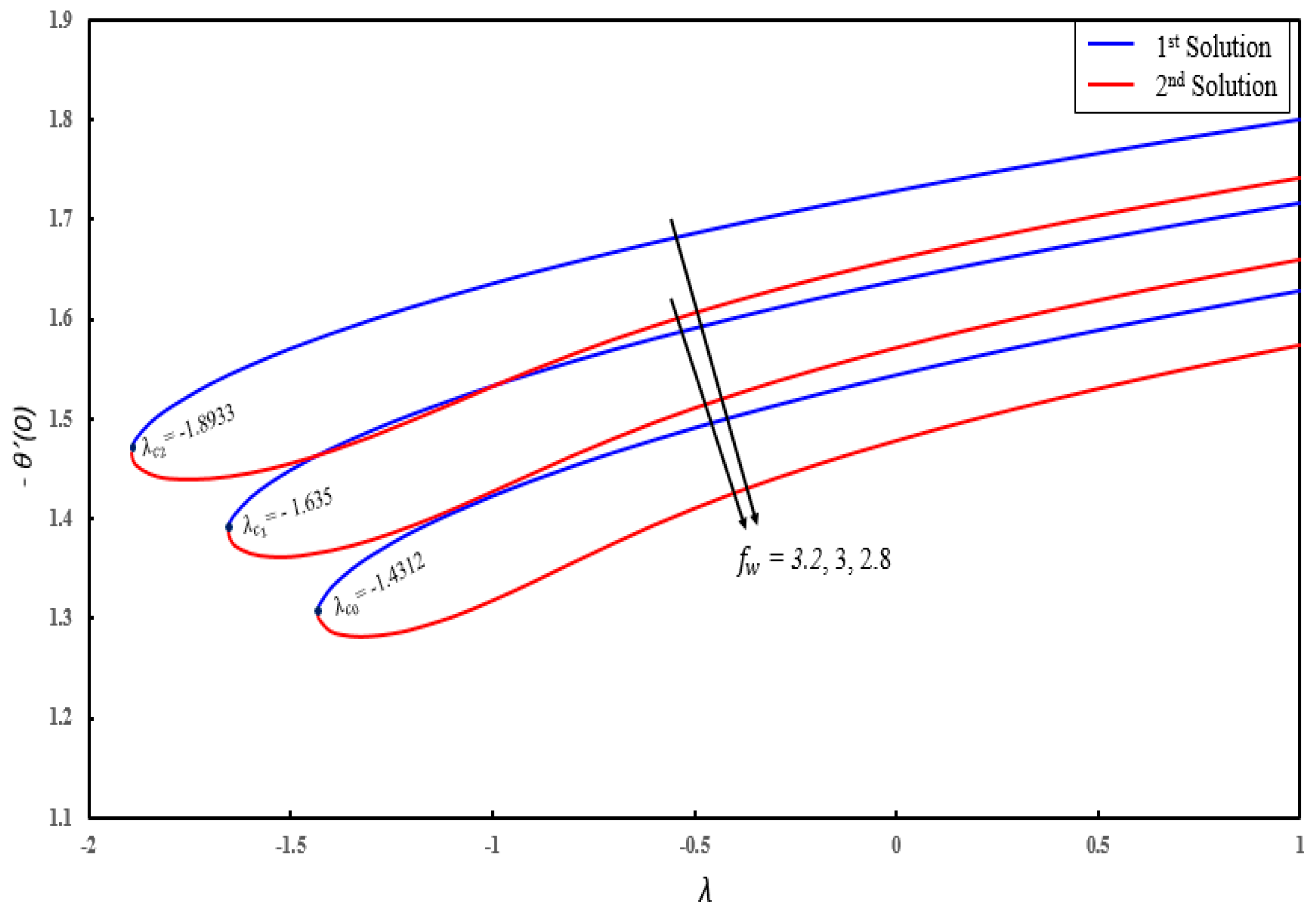 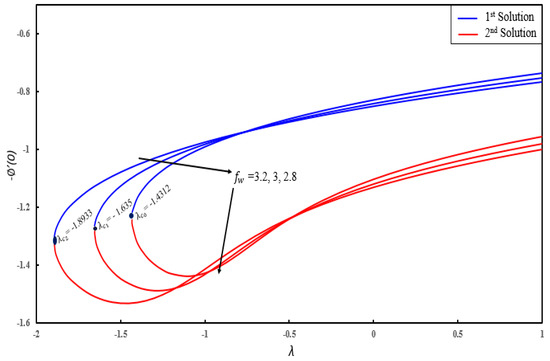 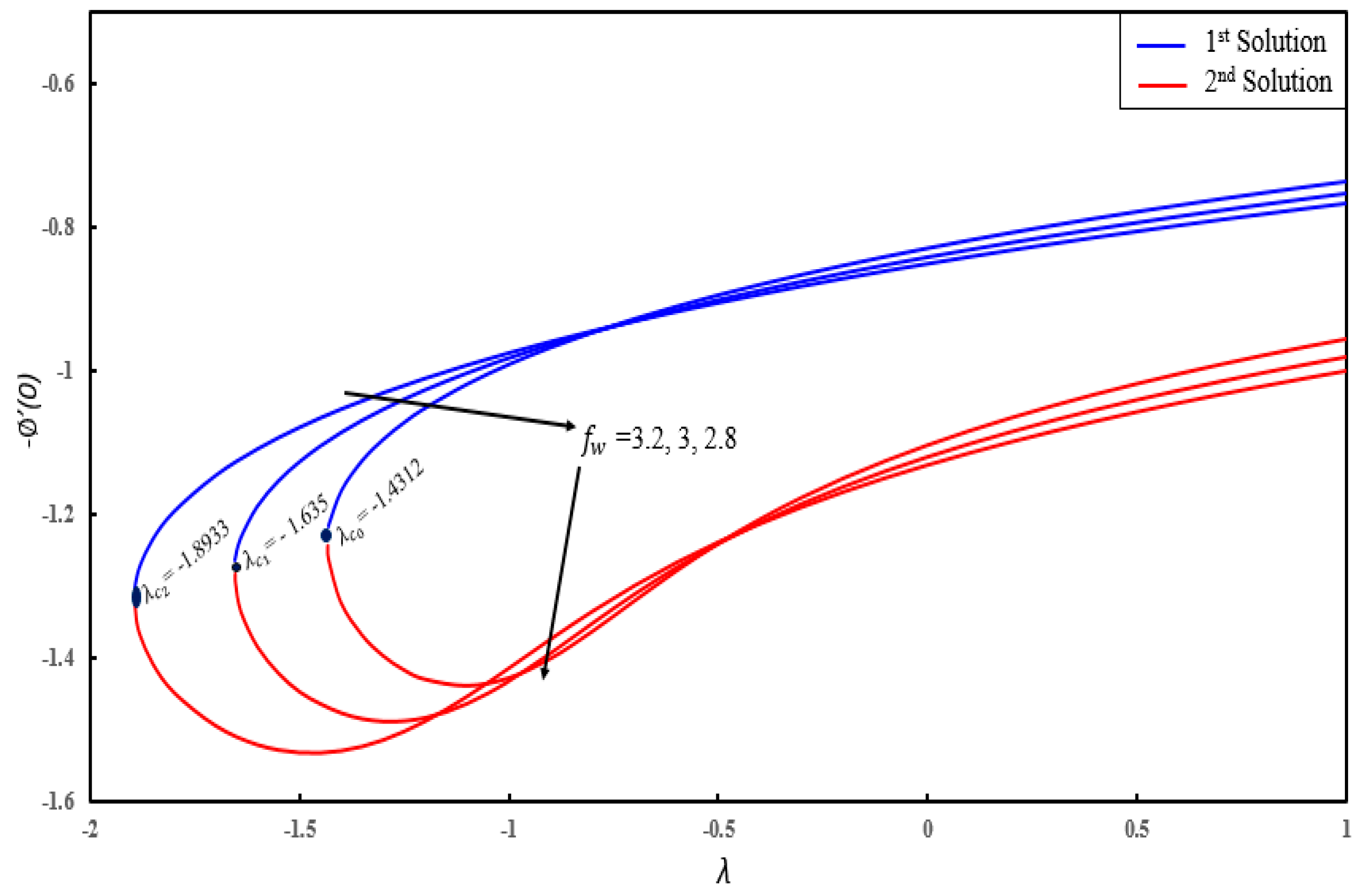 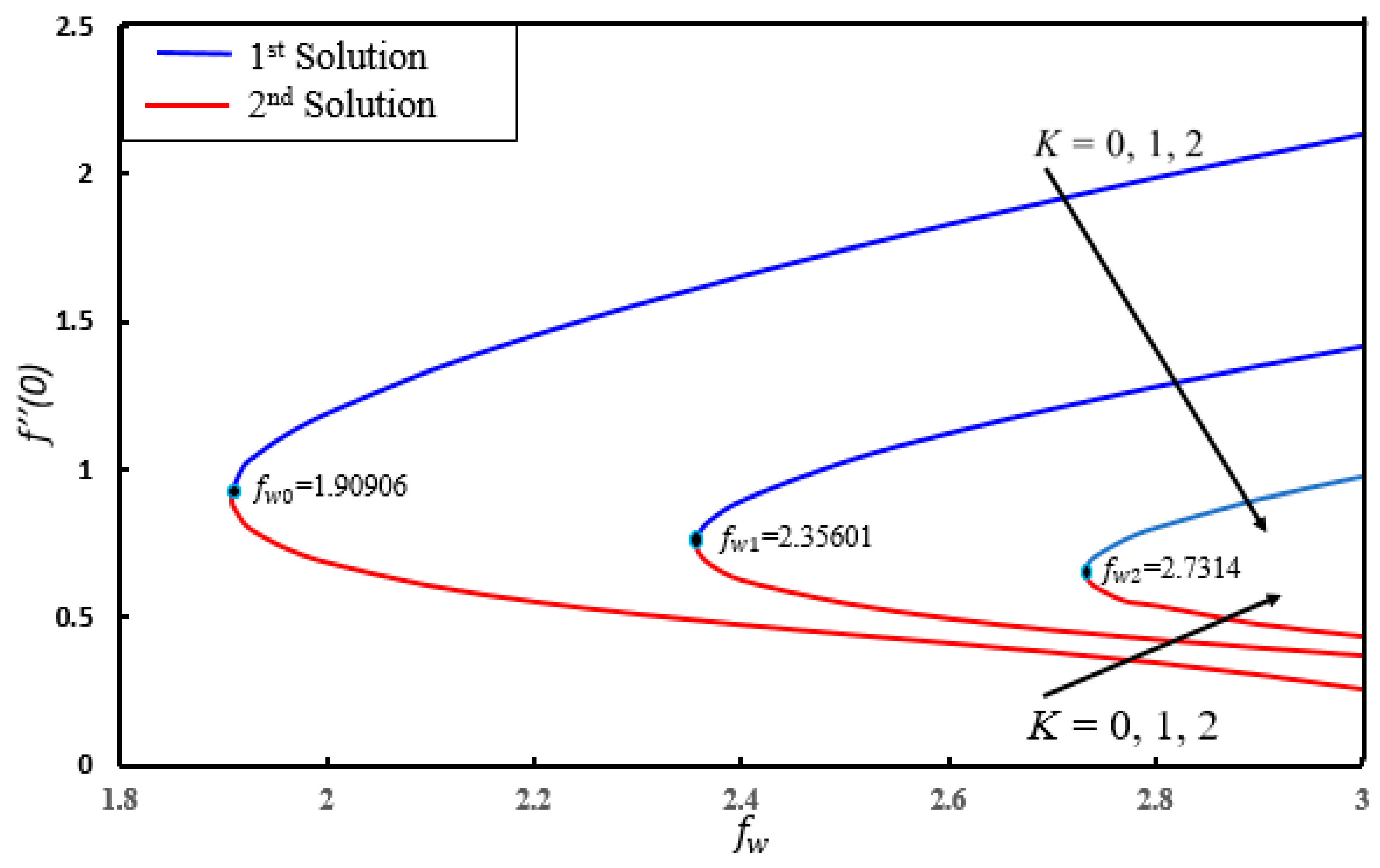 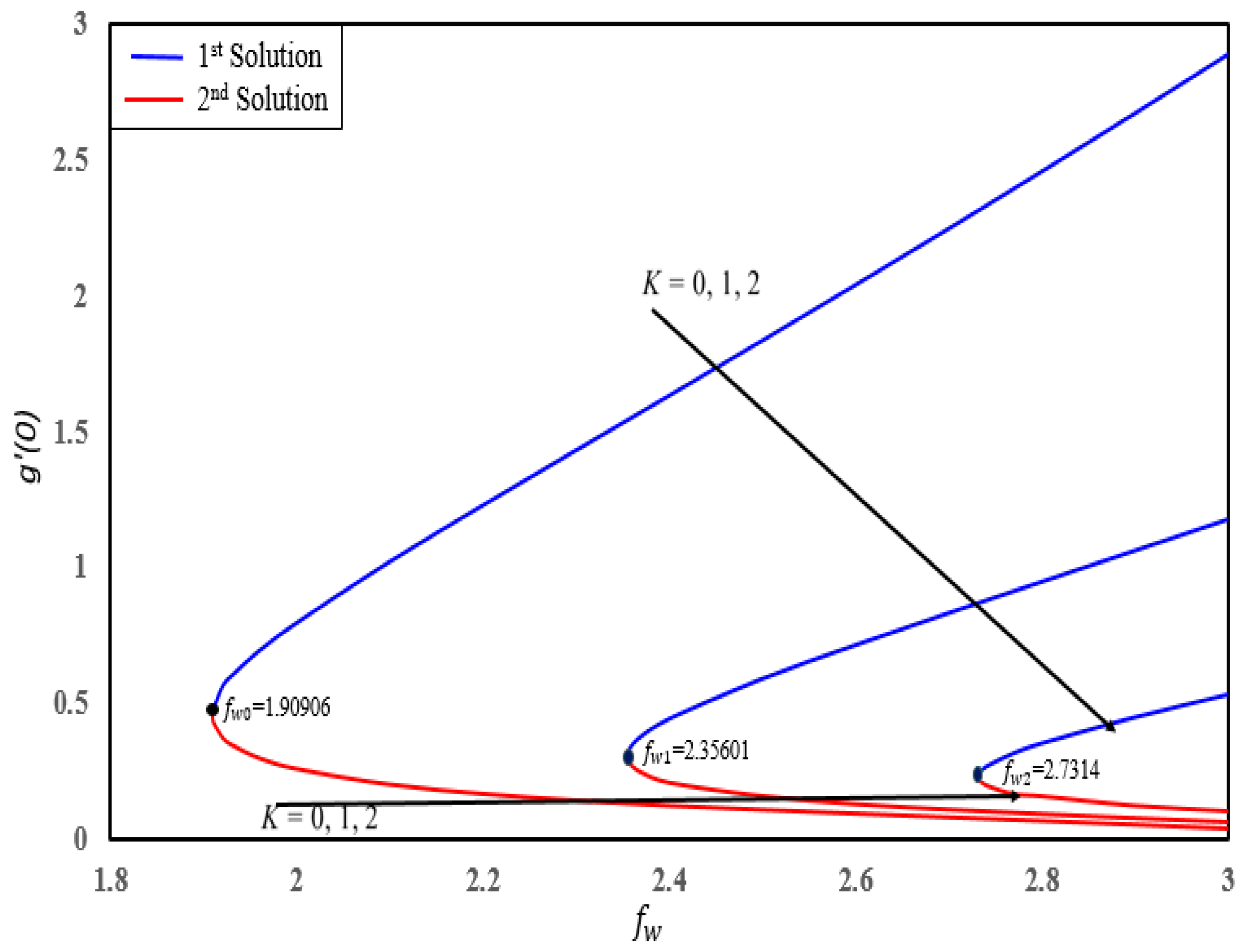 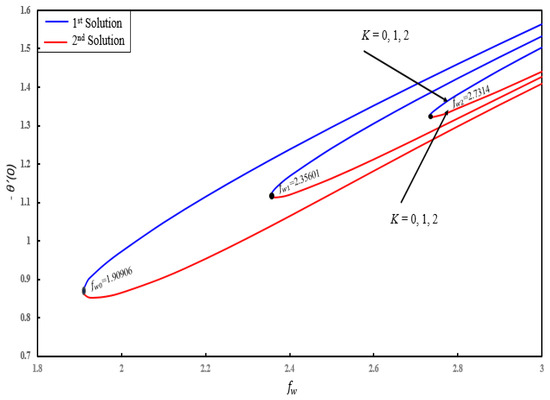 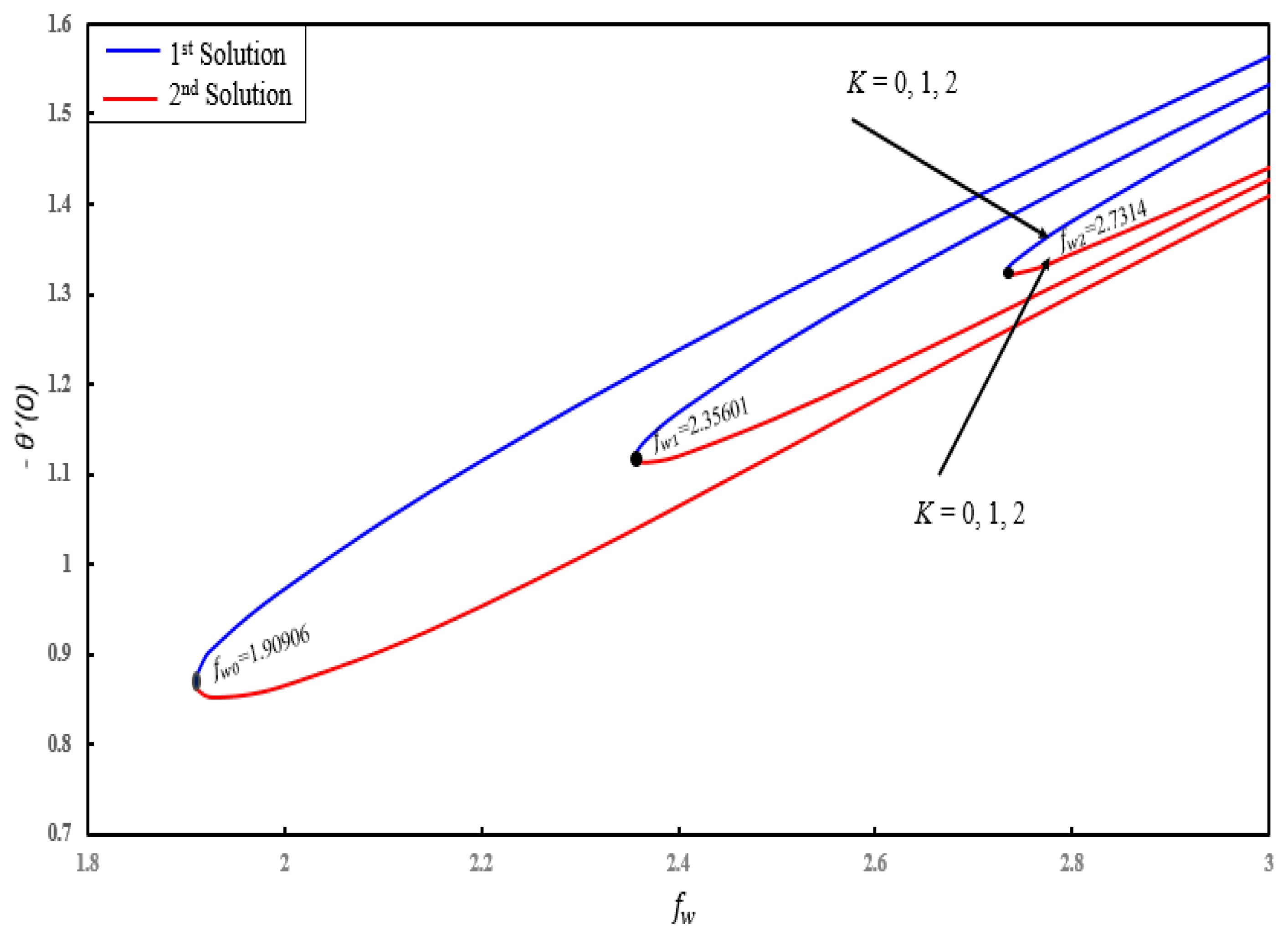 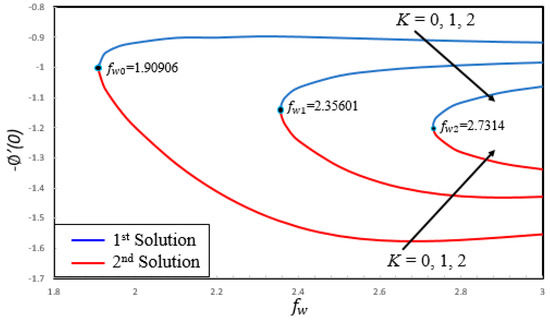 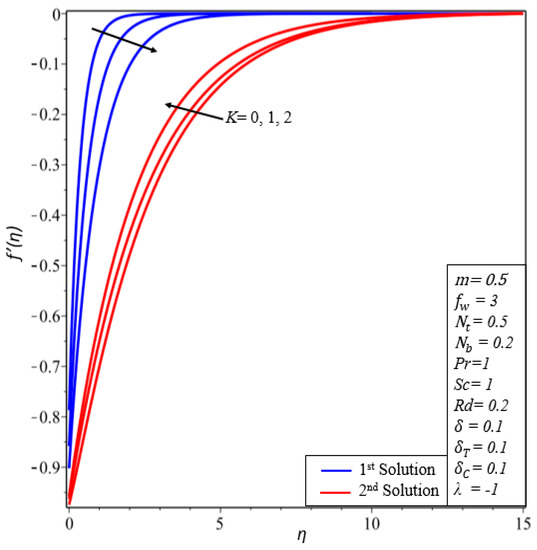 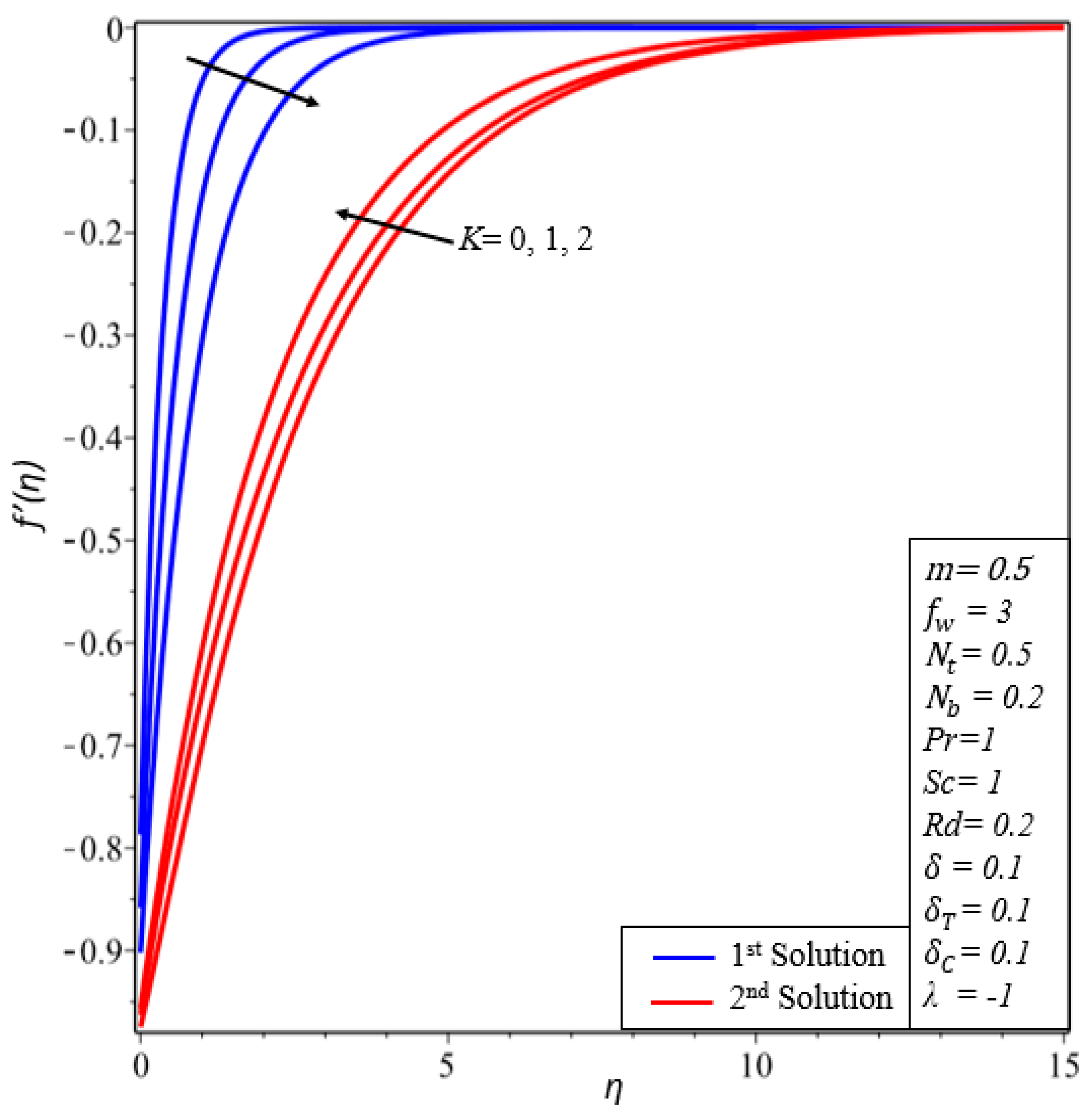 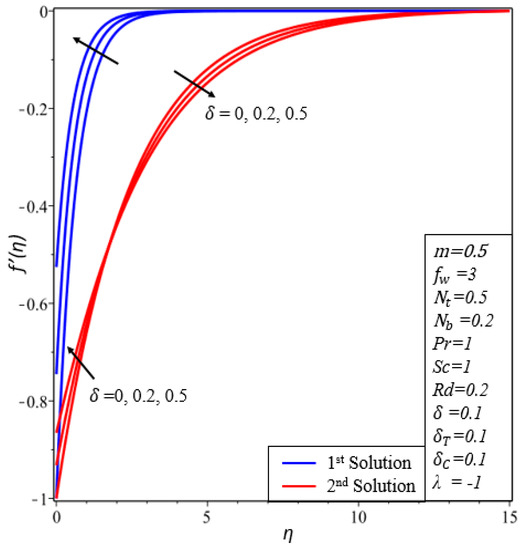 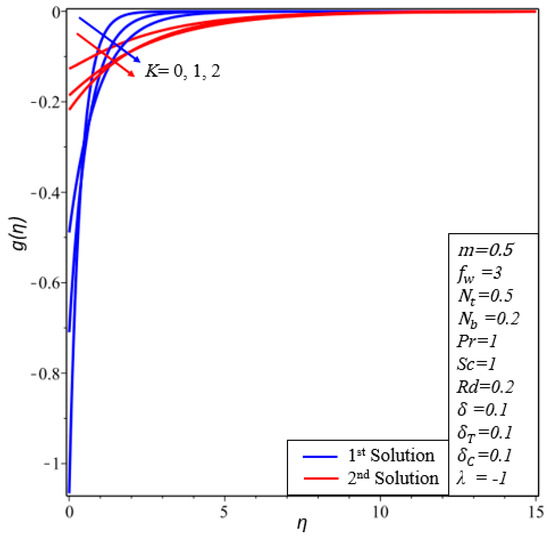 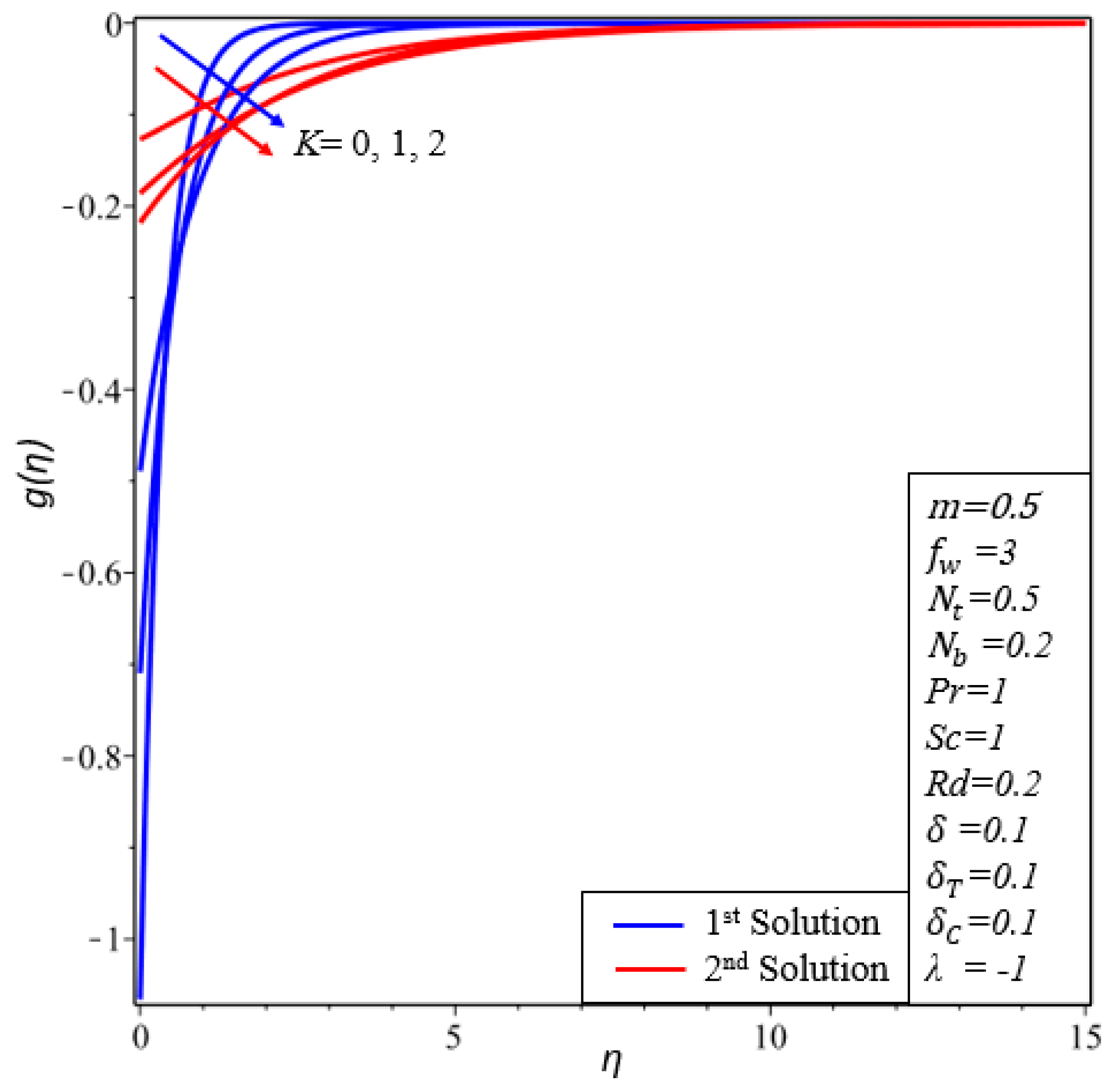 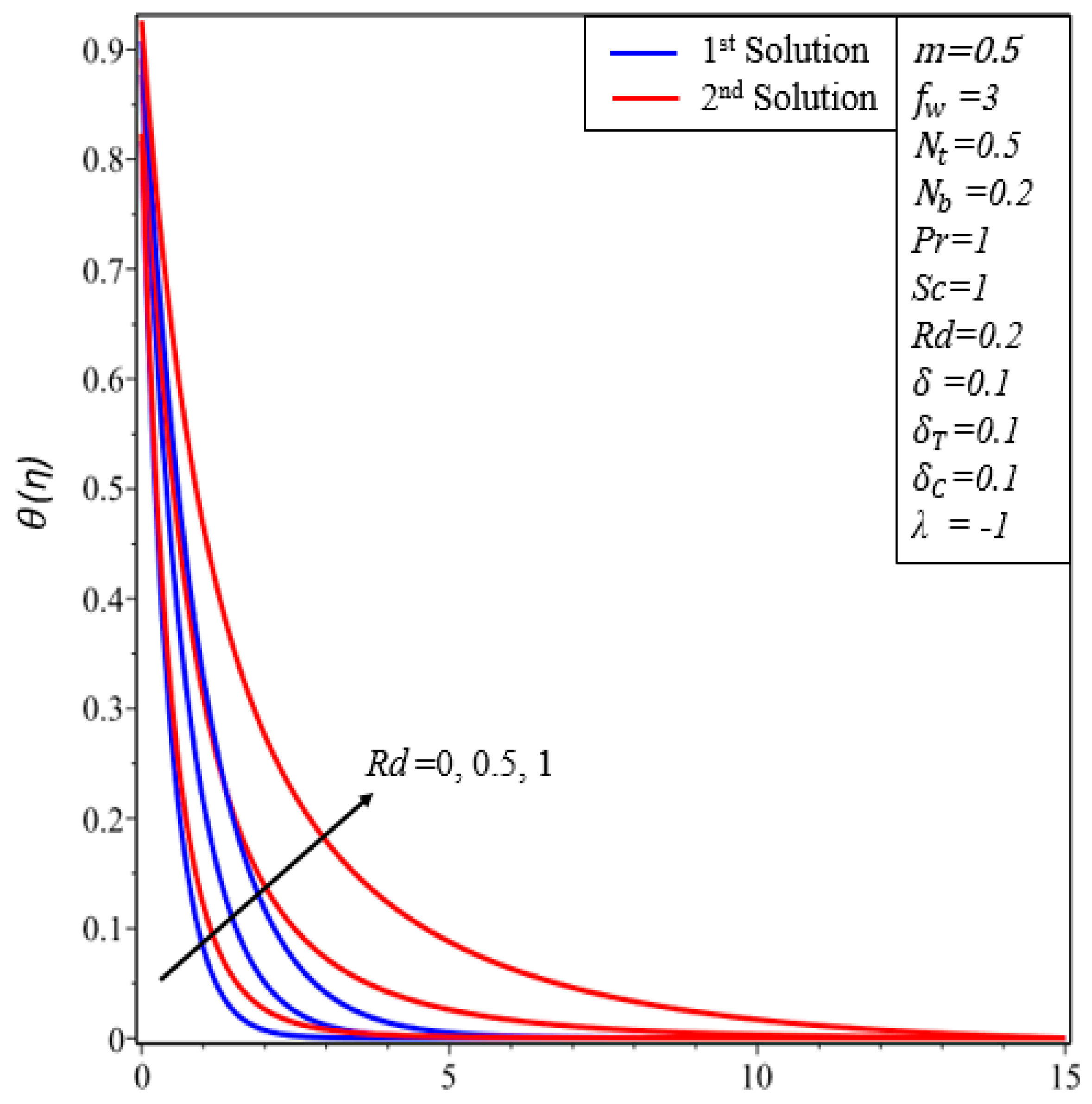 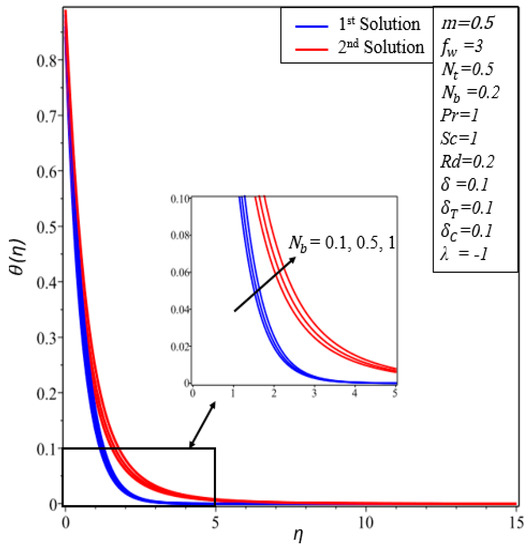 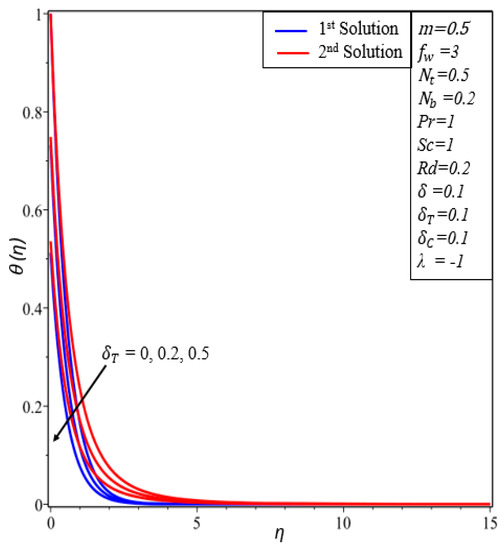 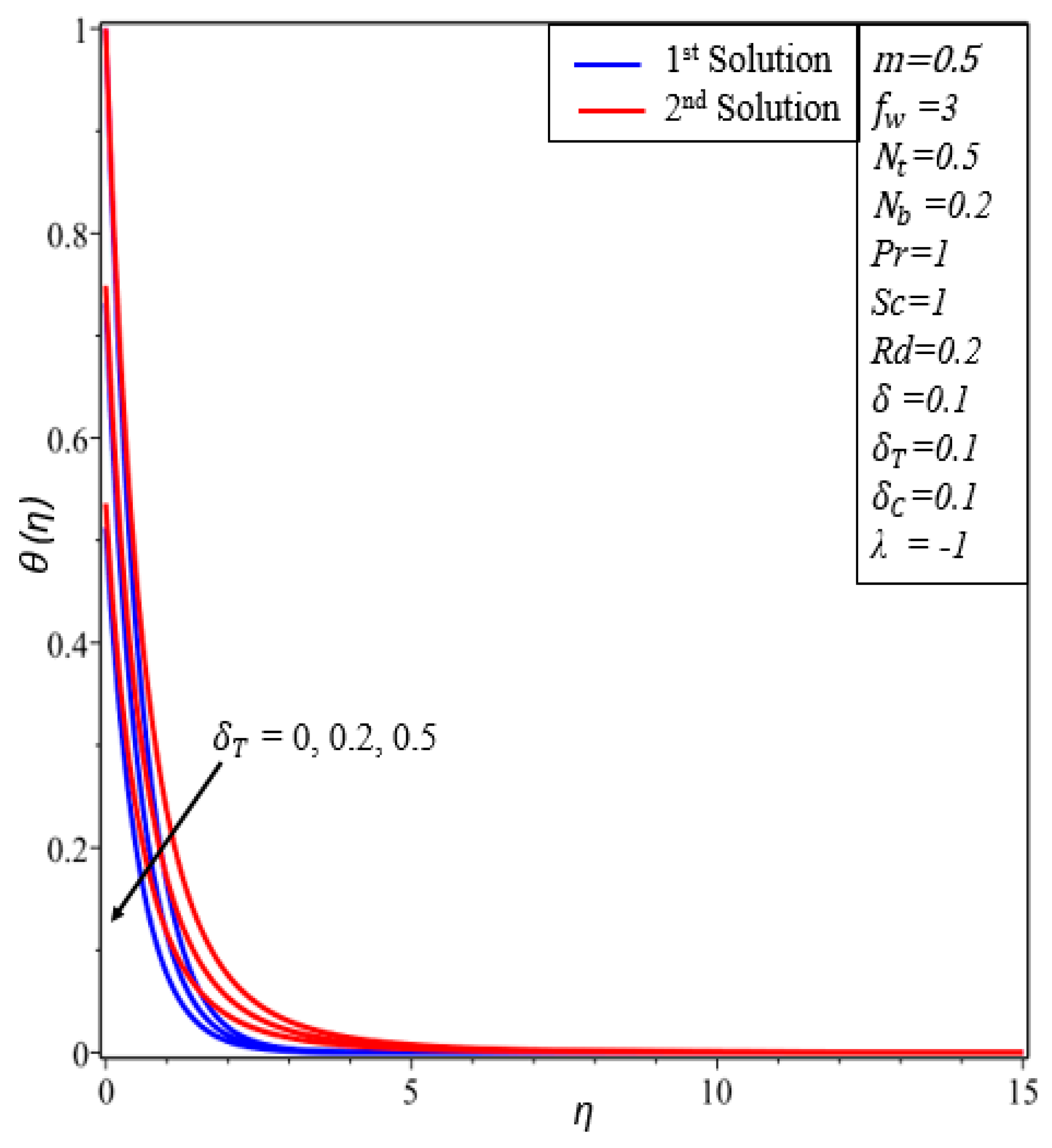 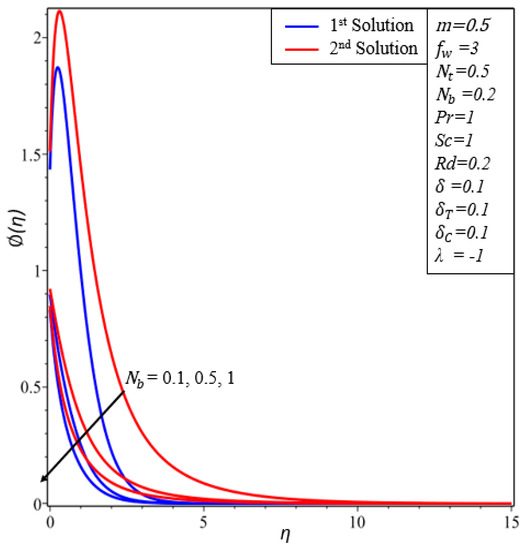 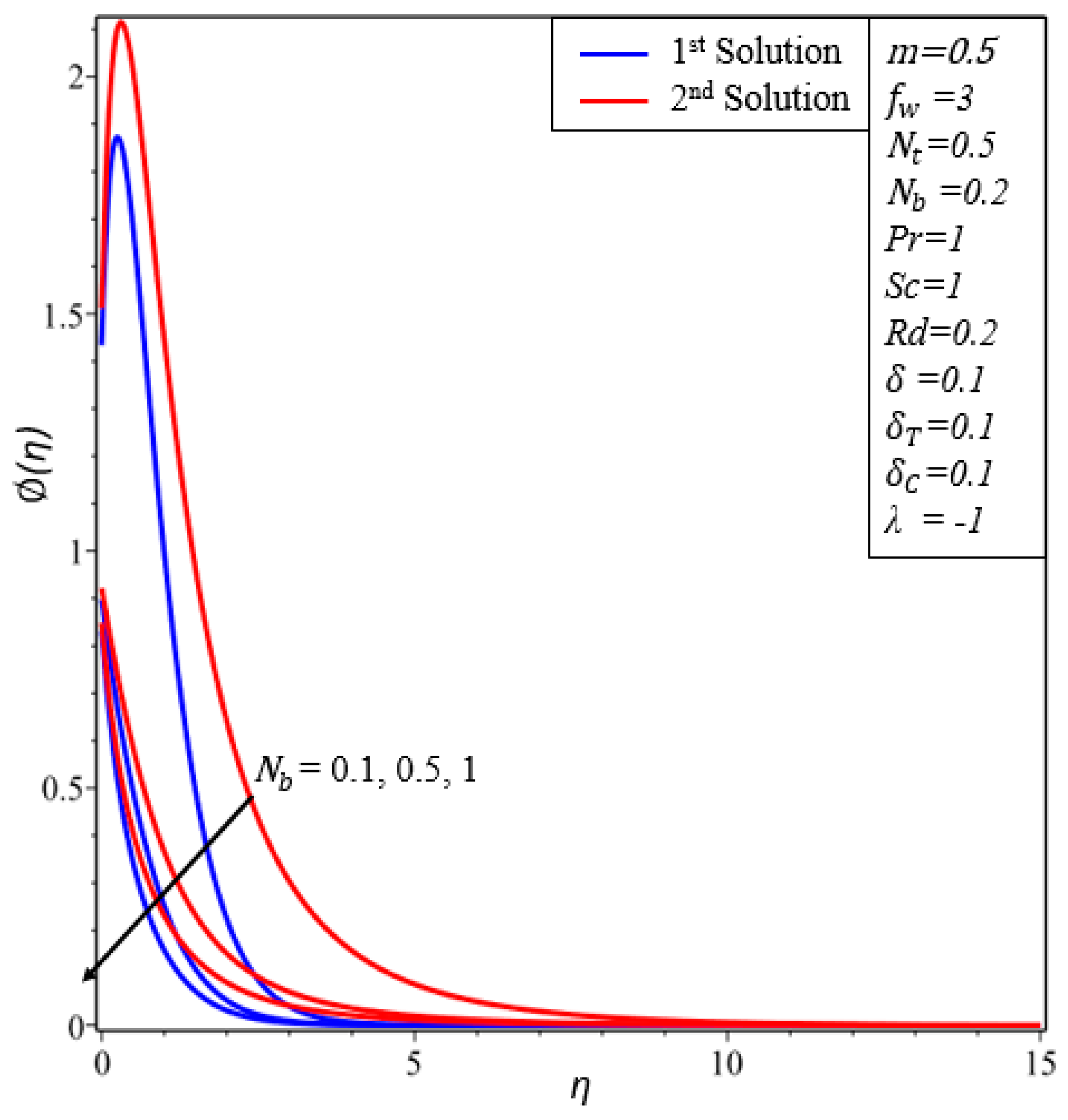 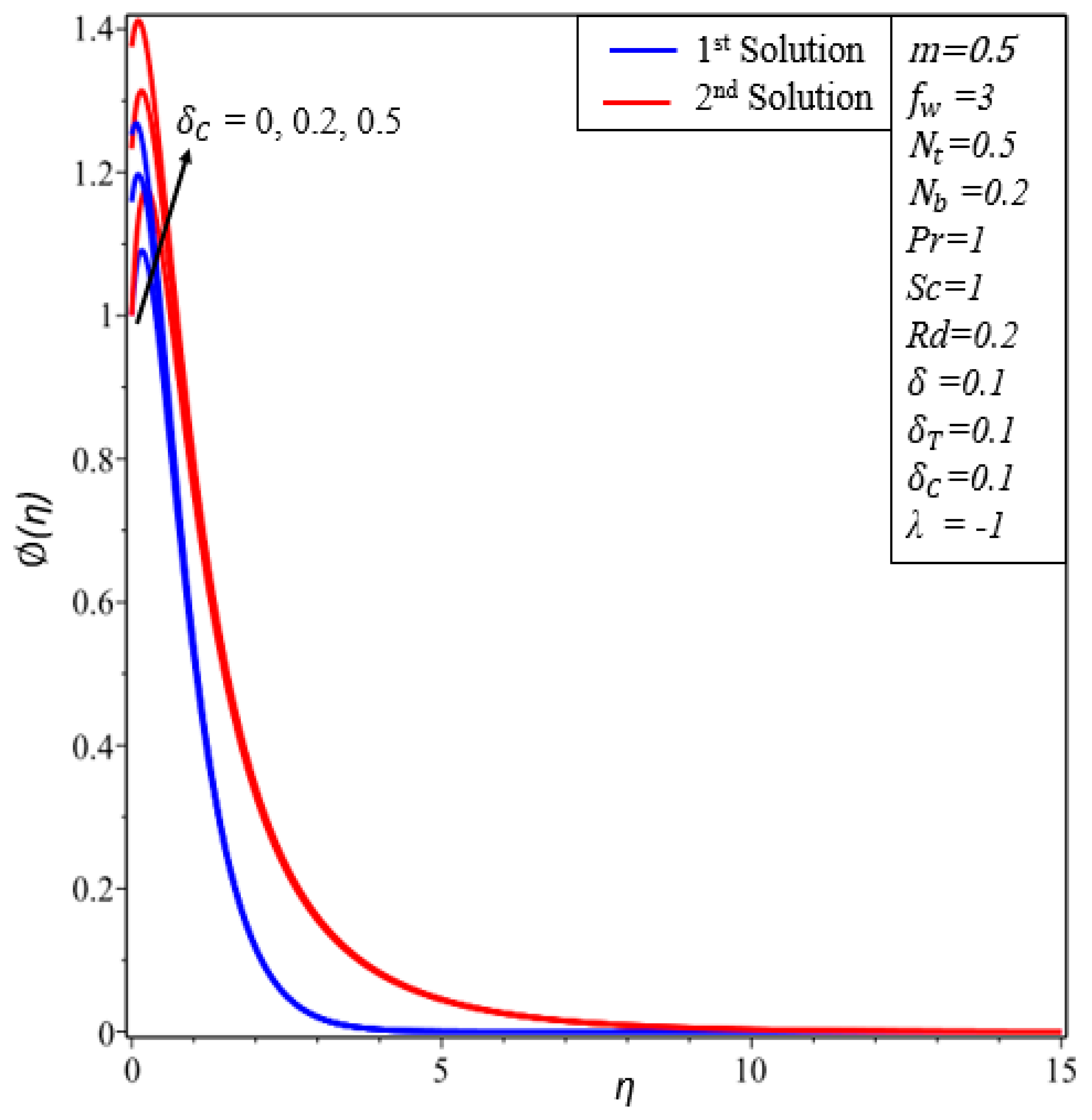 Table 2. Smallest eigenvalues for different values of and .
Table 2. Smallest eigenvalues for different values of and .
© 2019 by the authors. Licensee MDPI, Basel, Switzerland. This article is an open access article distributed under the terms and conditions of the Creative Commons Attribution (CC BY) license (http://creativecommons.org/licenses/by/4.0/).
We use cookies on our website to ensure you get the best experience. Read more about our cookies here.
Accept
We have just recently launched a new version of our website. Help us to further improve by taking part in this short 5 minute survey here. here.
Never show this again