In this work, a two-dimensional (2D) model for wood particle drying, devolatilization, and char conversion is presented and validated against experimental studies of devolatilization of a large, dry, cylindrical birch wood log. The wood log’s internal distributions of temperature, solid species densities, gas density, and gas species mass fractions, together with the internal pressure and the gas flow velocities in radial and longitudinal directions, were studied. It was found that the internal pressure peak significantly depended on the permeability of char. The velocity profiles changed as the pressure wave traveled radially inward in the same manner as the devolatilization zone. The wood log internal pressure was not only dependent on wood and char permeabilities but also depended on the devolatilization rate, which itself is a heat-controlled conversion stage. In addition to the study on wood anisotropy, which can be accounted for in detail by the presented 2D model, the authors compared the 2D results to results obtained from a corresponding 1D version of the model, where only radial heat and mass transfer properties were used. It was found that even though the predictions of the 2D model were in better agreement with experimental observations than the 1D modeling results, for these parameters, 1D models can still be used without too much loss in accuracy. Finally, the paper concludes with a clear recommendation of when higher dimensional models should be used and when they should not. View Full-Text
Keywords: devolatilization; anisotropy; large wood log; simulations devolatilization; anisotropy; large wood log; simulations
►▼ Show Figures 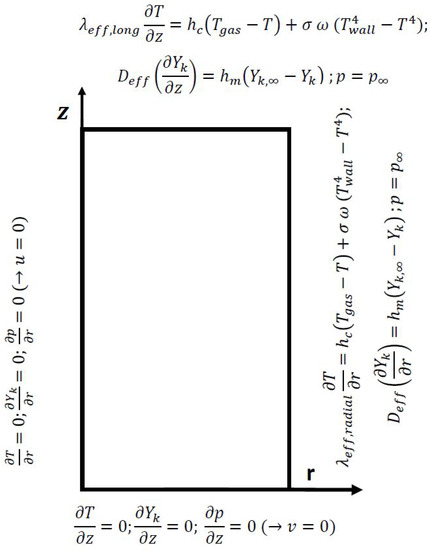 Haugen, N.E.L.; Skreiberg, Ø. A Two-Dimensional Study on the Effect of Anisotropy on the Devolatilization of a Large Wood Log. Energies 2019, 12, 4430.


Haugen NEL, Skreiberg Ø. A Two-Dimensional Study on the Effect of Anisotropy on the Devolatilization of a Large Wood Log. Energies. 2019; 12(23):4430.