This study presents a new interface for wellbore stability analysis, which visualizes and quantifies the stress condition around a wellbore at shear and tensile failure. In the first part of this study, the Mohr–Coulomb, Mogi–Coulomb, modified Lade and Drucker–Prager shear failure criteria, and a tensile failure criterion, are applied to compare the differences in the critical wellbore pressure for three basin types with Andersonian stress states. Using traditional wellbore stability window plots, the Mohr–Coulomb criterion consistently gives the narrowest safe mud weight window, while the Drucker–Prager criterion yields the widest window. In the second part of this study, a new type of plot is introduced where the safe drilling window specifies the local magnitude and trajectories of the principal deviatoric stresses for the shear and tensile wellbore failure bounds, as determined by dimensionless variables, the Frac number () and the Bi-axial Stress scalar (), in combination with failure criteria. The influence of both stress and fracture cages increases with the magnitude of the values, but reduces with depth. The extensional basin case is more prone to potential wellbore instability induced by circumferential fracture propagation, because fracture cages persists at greater depths than for the compressional and strike-slip basin cases. View Full-Text
Keywords: wellbore stability; failure criteria; stress trajectories; safe drilling window; Frac number; Biaxial-Stress scalar wellbore stability; failure criteria; stress trajectories; safe drilling window; Frac number; Biaxial-Stress scalar
►▼ Show Figures 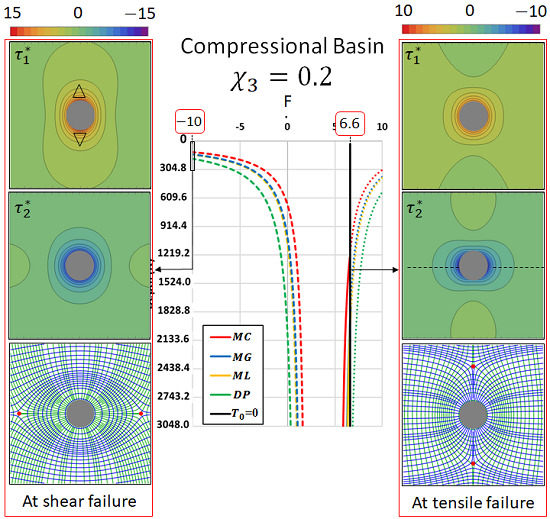