On the Kaiser Effect of Rock under Cyclic Loading and Unloading Conditions: Insights from Acoustic Emission Monitoring

Three types of rock, red sandstone, marble and granite, were used for experiments after they are seasoned naturally indoors. The density of the red sandstone, marble and granite were 2.39 g/cm3, 2.53 g/cm3, and 2.63 g/cm3, respectively. The polarizing microscope (PM) was used to examine the compositions and structures of red sandstone, marble and granite, and the scanning electron microscope (SEM) is adopted for analyzing the microstructures and compositions of the three types of rocks (Figure 1). The micro-examination shows: (1) Red sandstone, with the ultrafine-fine sand-like structure, mainly consists of the ultra-fine sand with the particle size of 0.06–0.12 mm and fine sand with the particle size of 0.12–0.25 mm. The main debris compositions include quartz and feldspar, the surface of the quartz is smooth, and some crystal surfaces are provided with undulatory extinction. The feldspar is plagioclase mainly and potash feldspar secondarily. The cement is mainly composed of evenly distributed calcite. The structure is relatively dense, and the development of pores is poor. (2) Marble exhibits granoblastic texture and massive structure. The composition is roughly 82% calcite and about 18% anhydrite. The crystalloblastic particles of the calcite are 0.15–2.0 mm. The anhydrite is in the board shape and column shape with the width of 0.01–0.8 mm and length of 0.1–3.0 mm, respectively. The calcite particles are closely inlaid with each other with dense structure. (3) Granite exhibits monzonitic texture, massive structure and comparatively dense structure. The main compositions are quartz, alkali feldspar and plagioclase. The quartz accounts for about 20% with the particle size of 0.6–3.6 mm, the alkali feldspar accounts for about 45% with the particle size of 0.8–6.0 mm, the longboard-shaped plagioclase accounts for about 32% with the width of 0.4–1.6 mm and the length of 1.4–4.2 mm and the biotite accounts for about 3% with the particle size of 0.5–1.6 mm. The standard-sized cylindrical rock samples with the diameter of 50 mm and height of 100 mm were prepared using coring machine, rock saw and grinder. The UCS of the red sandstone, marble and granite were 62.80 MPa, 93.72 MPa and 103.84 MPa, respectively.
The MTS 816 rock mechanics testing system (Figure 2c) is employed for the laboratory tests. The systems comprise loading, testing and control components. Different control modes such as force/stress control and displacement/strain control are available to satisfy the requirements of various types of tests. The rigidity of the testing machine is 2.6 × 109 N/m, the axial load is 1459 kN, and the maximum strike of the axial actuator is 100 mm. The sensitivity of the servo valve is 290 Hz. The data acquisition frequency ranges from 5 kHz to 1 MHz. The loading strain rate varies from 10−7/s to 10−2/s. The minimum sampling time is 50 μs. The DS5-A acoustic emission testing and analysis system (Figure 2e) is adopted for AE monitoring. The system continuously stores the waveform data during the test with good stability and high accuracy. The continuous data storage speed is greater than 262 MB/s. The frequency is 10 MHz, the preamplifier gain is 40 dB, and the threshold value is 30 dB. To ensure the coupling between the AE sensor and the rock sample, Vaseline is applied to the ceramic end of the AE sensor that is fixed to the rock sample using hot melt adhesive (Figure 2d). Meanwhile, the position between the end surface of the rock sample and the bearing plate of the loading system is coated with Vaseline to reduce the influence of the end friction of the bearing plate on the AE of rocks. During the whole deformation and failure of rocks, the loading system and detection system for AE are operated synchronously.
Uniaxial cyclic loading and unloading tests of red sandstone, marble and granite under different stress levels and loading rates are conducted. The loading path of the uniaxial cyclic loading and unloading is illustrated in Figure 2b. Detailed experimental scheme can be found in Table 1. Each test consists of two stages. In the first stage, the stress control mode is adopted to apply the loading stress to a prescribed value (σA) at the rate of 1.0 MPa/s. σA are 50%, 60%, 70%, 80% or 90% of the UCS (σc) the rock, respectively. Then the load is kept constant for three minutes, which eliminates the influence of the AE events caused by the friction and slippage between the microstructure surfaces inside the rock on the subsequent experimental results [22,23,28,31]. The axial stress is then unloaded to 0.5 MPa at the rate of 1.0 MPa/s. Note that the axial stress is not zero, which ensures that the bearing plate of the loading system is completely contacted with the end surface of the rock sample during the test. In the second stage, the displacement control mode is utilised to avoid the sudden failure of the rock sample under the stress control mode. The loading rates (lr) are prescribed to be 0.001 mm/s, 0.005 mm/s, 0.01 mm/s, 0.05 mm/s and 0.1 mm/s, respectively. The corresponding strain rate is approximately 10−5/s to 10−3/s, belonging to the medium and low strain rate levels [29,32,33].

Figure 3, Figure 4, Figure 5, Figure 6, Figure 7, Figure 8 and Figure 9 show the AE characteristics of the three types of rocks under uniaxial compression and uniaxial cyclic loading and unloading conditions, respectively.
The stress–time–AE curves of the three types of rocks subjected to uniaxial compression are divided into four stages, i.e., compaction stage, elastic stage, yield stage (both the stable and unstable expansion stages of cracks, respectively) and post-peak stress drop stage. Correspondingly, the deformation and failure of rock is divided into fracture closure stage, elastic stage, dilatancy stage (generation of new fractures) and macroscopic failure stage. The AE evolution is composed of quiet period, transition period, active period and attenuation period accordingly. Figure 3 shows the AE of the three types of rock during uniaxial compression features: (1) In the quiet period (OA), in correspondence with the compaction stage of the stress-strain curve, the primary microcracks, pores and joints in the rock sample close. Because the surfaces of microfissures are rough and particles in the rock sample slide against each other, a small number of low-energy AE events with appreciable fluctuations are observed. (2) The transition period (AB) corresponds to the elastic stage of the stress–strain curve. The stress applied to the rock sample in this stage is insufficient to form new cracks. Thus, the AE activity is not evident. After the compaction stage, the microfissures and joints in the rock sample are compacted and closed. However, the slippage of some closed cracks leads to the generation of a small amount of low-energy AE events. (3) The active period (BC) corresponds to the yield stage of the stress-strain curve. As the axial stress increases continuously, the microcracks in the rock sample are continually generated and expanded. The AE activity becomes active with an increasing number of AE events. When the stress peaks, the microfissures finally converge and interpenetrate to form the macroscopic fracture surface and fail the rock sample. At the point of failure, the AE activity is extremely active with the maximum number of AE events. (4) The decay period (CD) of AE corresponds to the failure stage of the stress–strain curve. The rock sample has some bearing capacity due to the friction between the fracture surfaces, which sustains continuous generation of AE. However, during the rapid stress drop, the number of AE events is gradually reduced.
The stress–time–AE relationships during the uniaxial cyclic loading and unloading test of the three types of rocks (Figure 4, Figure 5, Figure 6, Figure 7, Figure 8 and Figure 9) exhibit the following features. First, the FG section is the loading stage of the first cycle with a small number of AE events. As the stress increases continuously, the number of AE events grows. The stage GH is the load-sustain stage of the first cycle. In this stage, AE events are continuously generated due to the friction or crack slip on the surface of some microcracks. The stage HI is the unloading stage of the first cycle. In this stage, the expansion of original cracks and the formation of new cracks do not occur. Thus, only a small number of AE events are observed. The stage HJ is the loading stage of the second cycle. After the closure of the microfissures and joints in the rock sample in Stages FG and GH in the first cycle, few AE events appear in the initial loading stage due to small stress. Thus, the loading rate can effectively inhibit the generation of the friction-type AE, which favors the identification the stress point of the Kaiser effect in the subsequent reloading stage. The prescribed stress level of the first cycle (σA), however, affects more pronouncedly the occurrence of AE during the second cyclic loading stage. When σA is lower, the stress at which a large amount of AE events appears in the second loading cycle (σAE) is higher. Normally, when the stress exceeds σA of the first loading, noticeable AE events occur, and the Kaiser effect becomes obvious. When σA is greater, σAE is lower. Apparent AE events occur in the rock sample in the initial stage of the second loading. The Kaiser effect disappears whereas the Felicity effect occurs. The evolutions of the stress–time–AE characteristics of the three types of rock are generally consistent. The loading rate and the lithology affect the Kaiser effect of rock.

The experimental results indicate that the Kaiser effect of rocks disappears and the Felicity effect appears when the influencing factors such as stress level, loading path and loading rate vary [21,26,27]. The Felicity effect is also called the anti-Kaiser effect, which means that during the cyclic loading testing, when the loading stress is less than the highest stress level in the loading history, the AE events occur noticeably. The Felicity effect represents the memory ability of the rock to damage, which is usually estimated through the Felicity rate (FR).
The definition of Felicity rate (FR):
FR = σAE/σm
where σAE is the stress point of the Kaiser effect, i.e., the stress at which a large number of AE events occurs during the second cyclic loading. σm is the maximum stress in the first cyclic loading.
The FR values of the three types of rocks under different stress levels and loading rates are obtained through Equation (1) (see Table 2). The values of FR of the three types of rocks are shown in Figure 10 and Figure 11. The occurrence conditions of the Kaiser effect and the Felicity effect of the three types of rocks are discussed in the following by analyzing the effect of stress level and loading rate on the variation of FR.

4.1. Effect of Stress Level on the Kaiser Effect

We systematically conducted the uniaxial cyclic loading and unloading test on red sandstone, marble and granite samples. The stress–time–AE relationships of the three types of rocks under different stress levels and loading rates were obtained. The stress point of the Kaiser effect in the reloading stage was determined. How the stress level and loading rate affected the Kaiser effect was investigated. The main conclusions in this paper are summarized:

This research was funded by the Fundamental Research Funds for the Central Universities (No. 2019XKQYMS53). 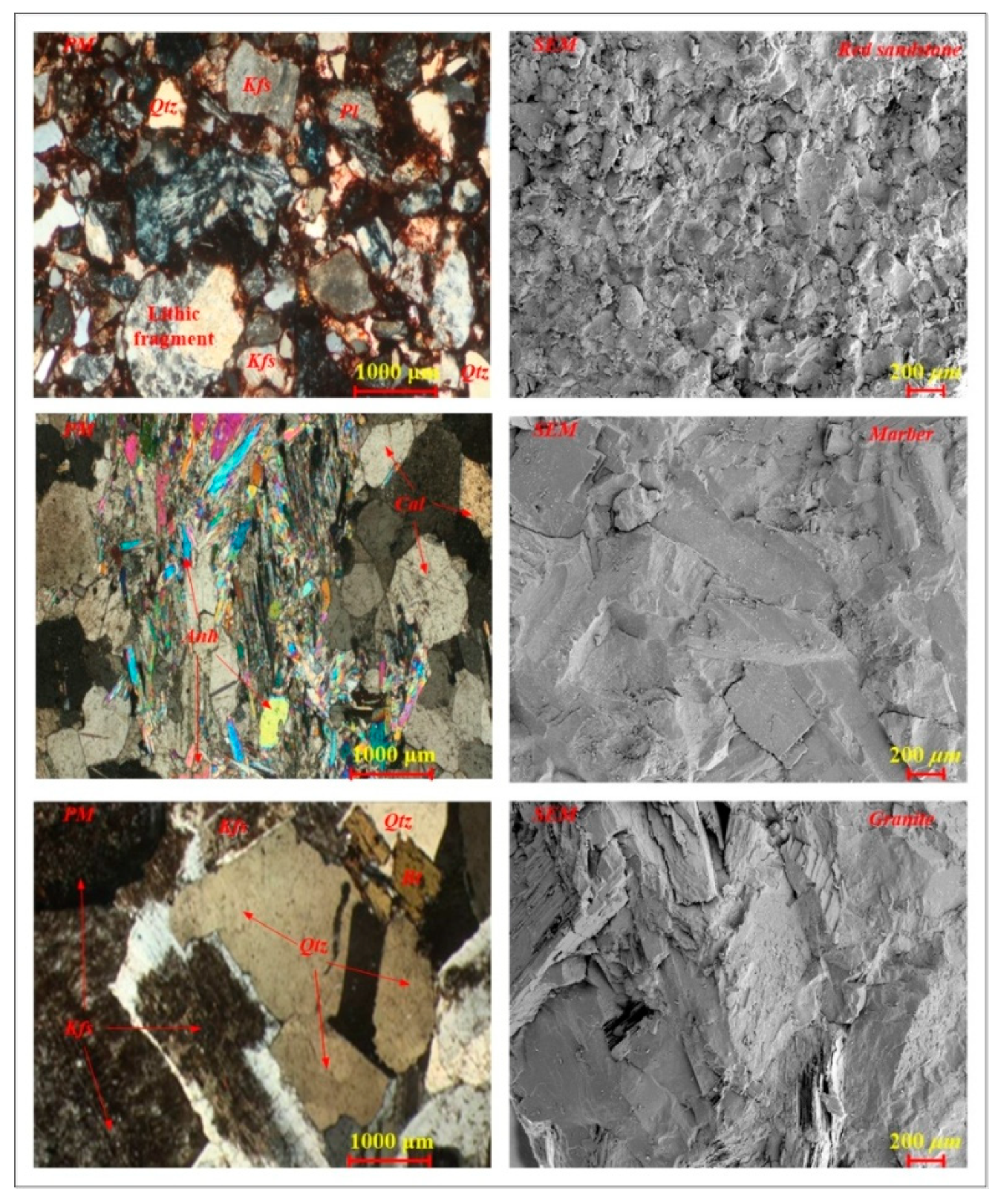 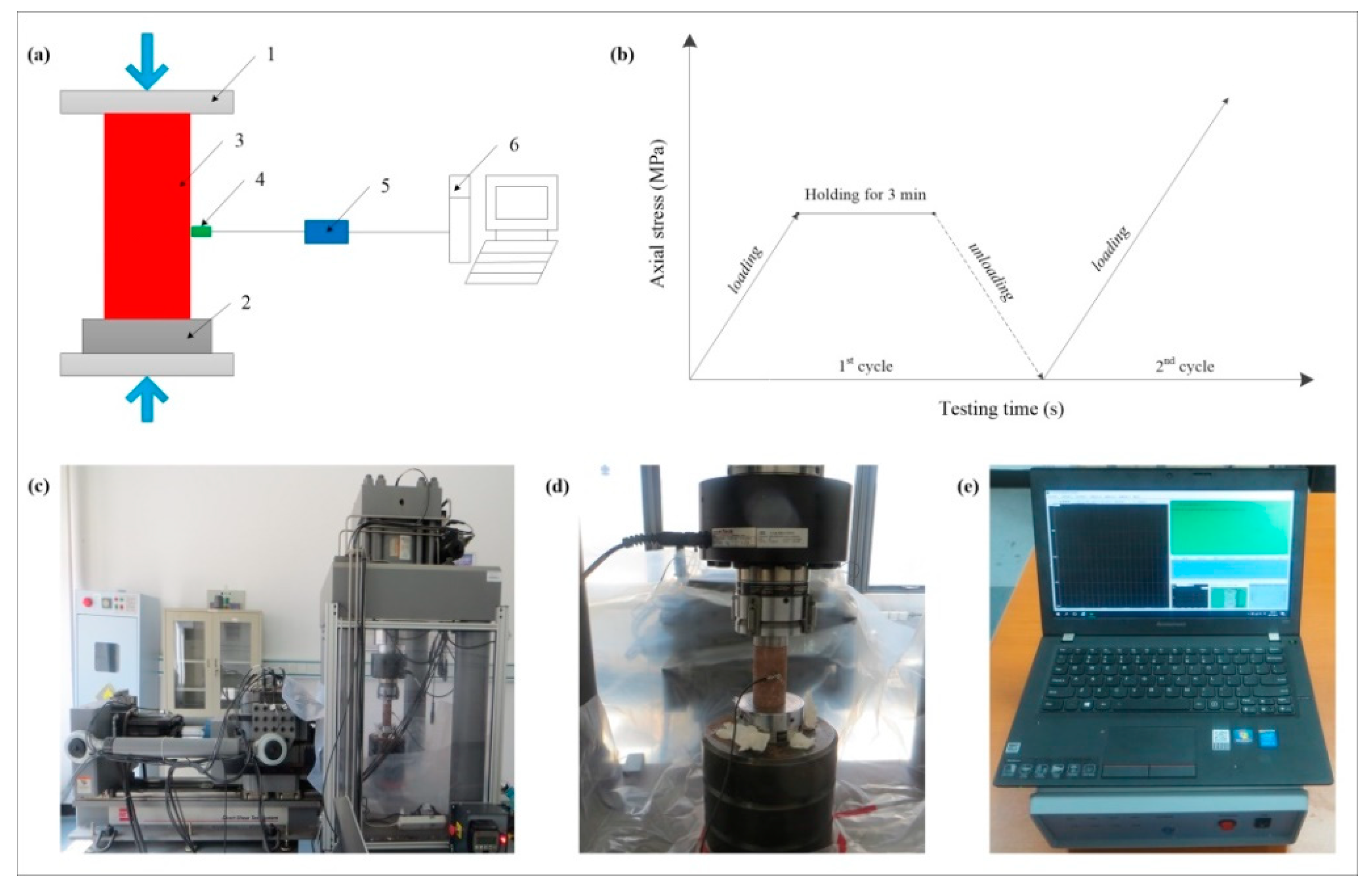 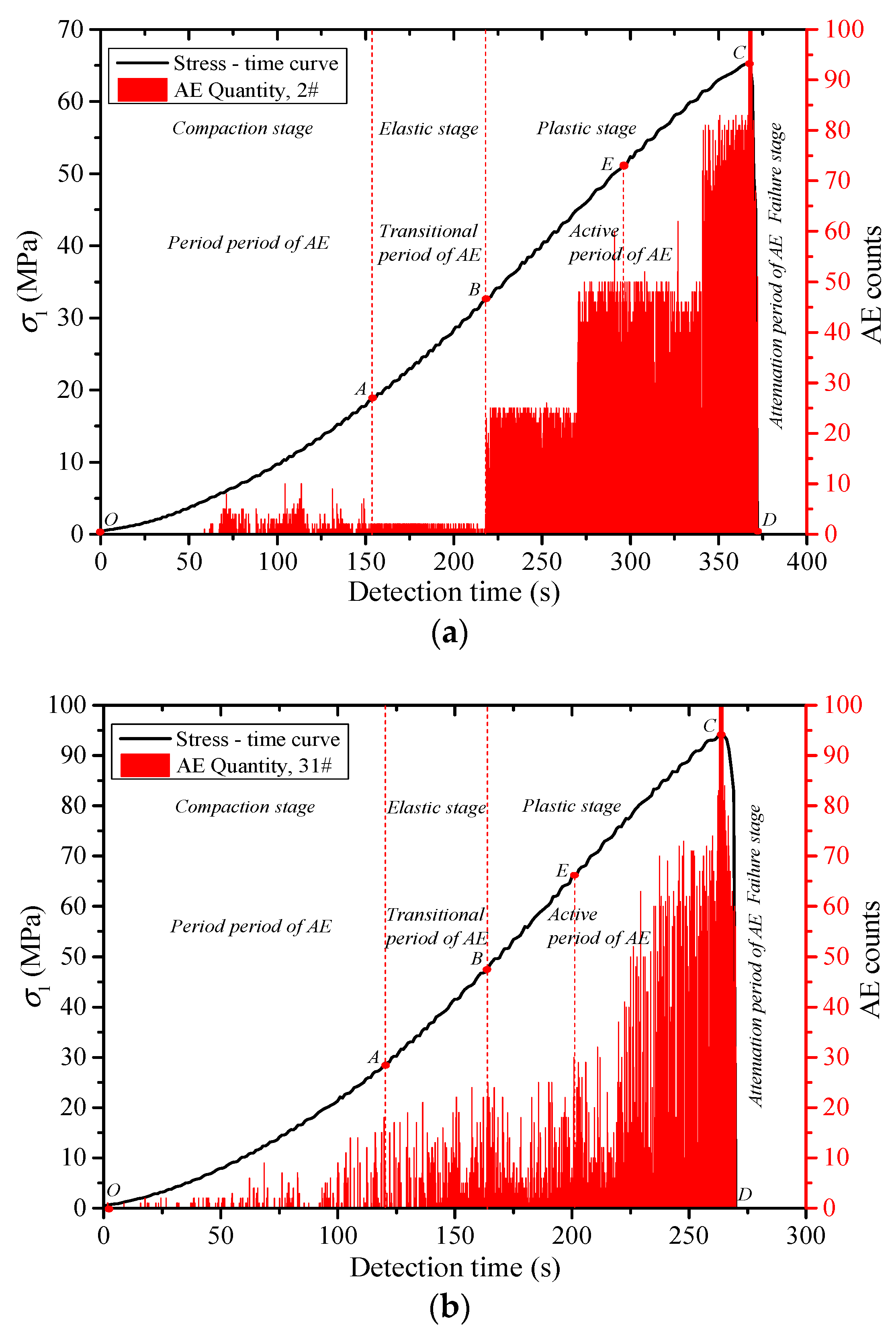 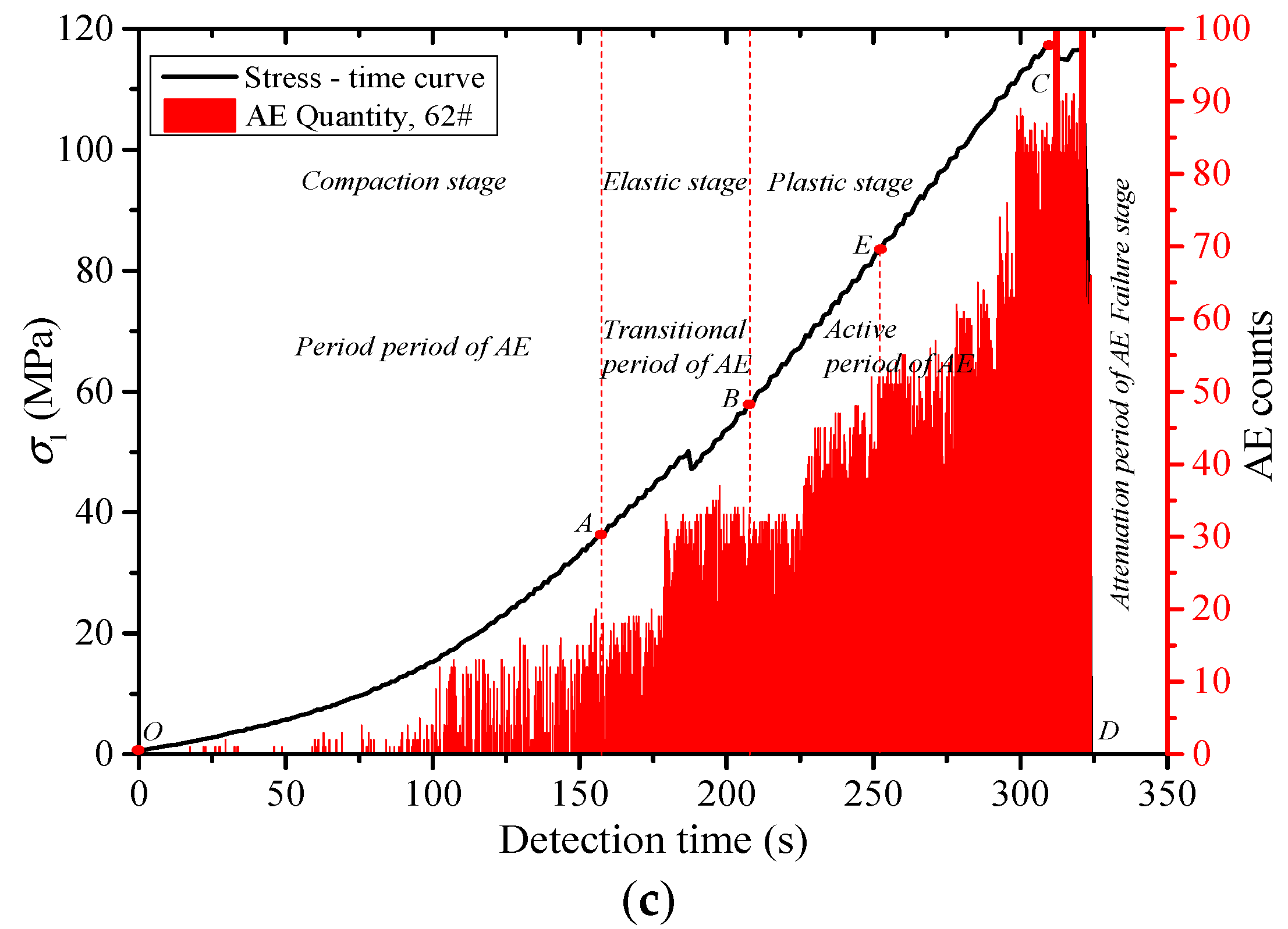 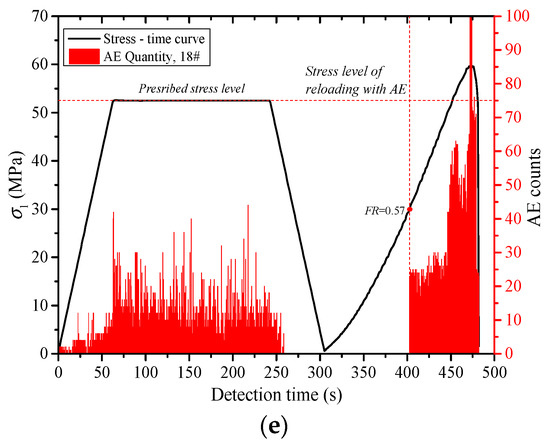 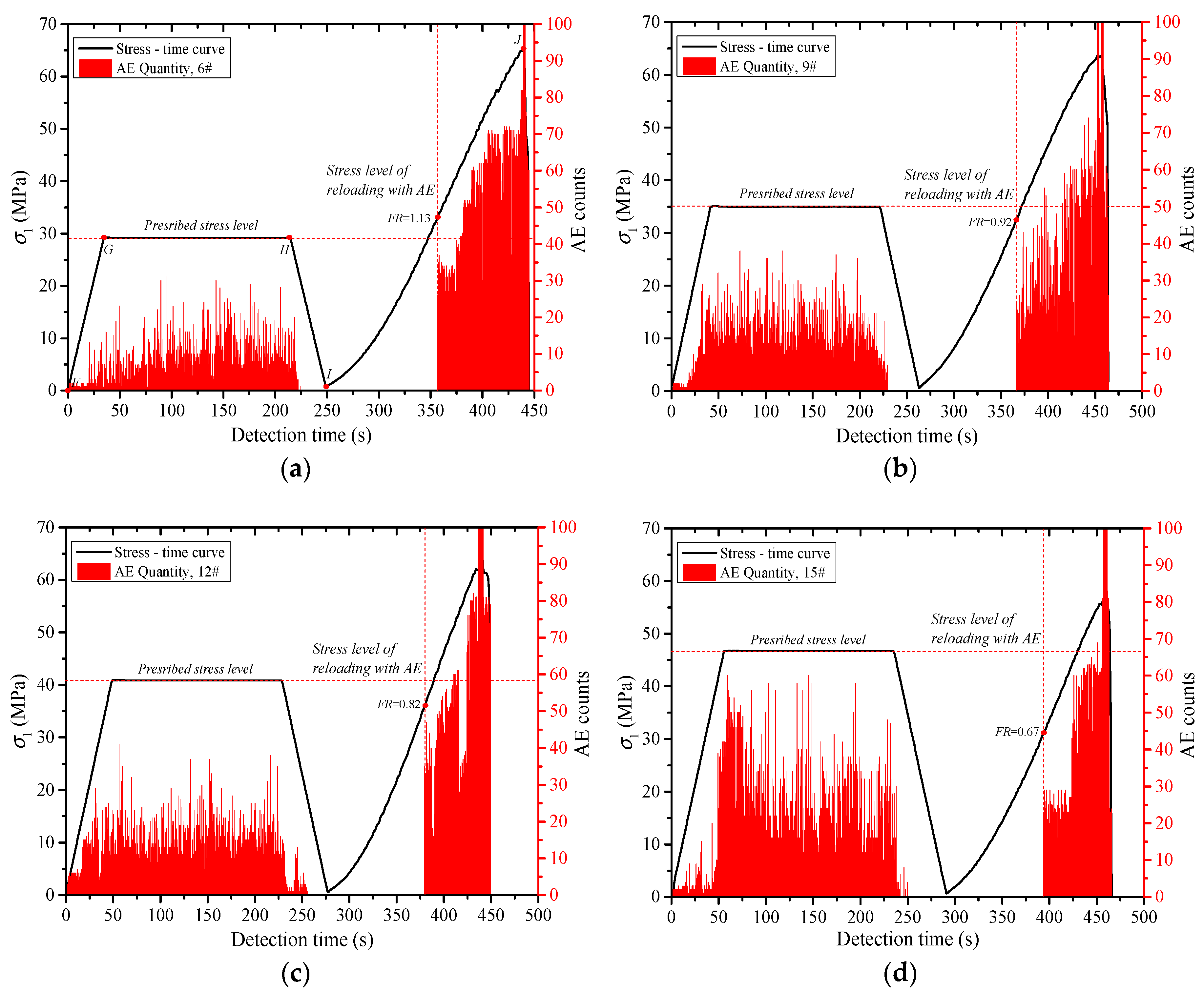 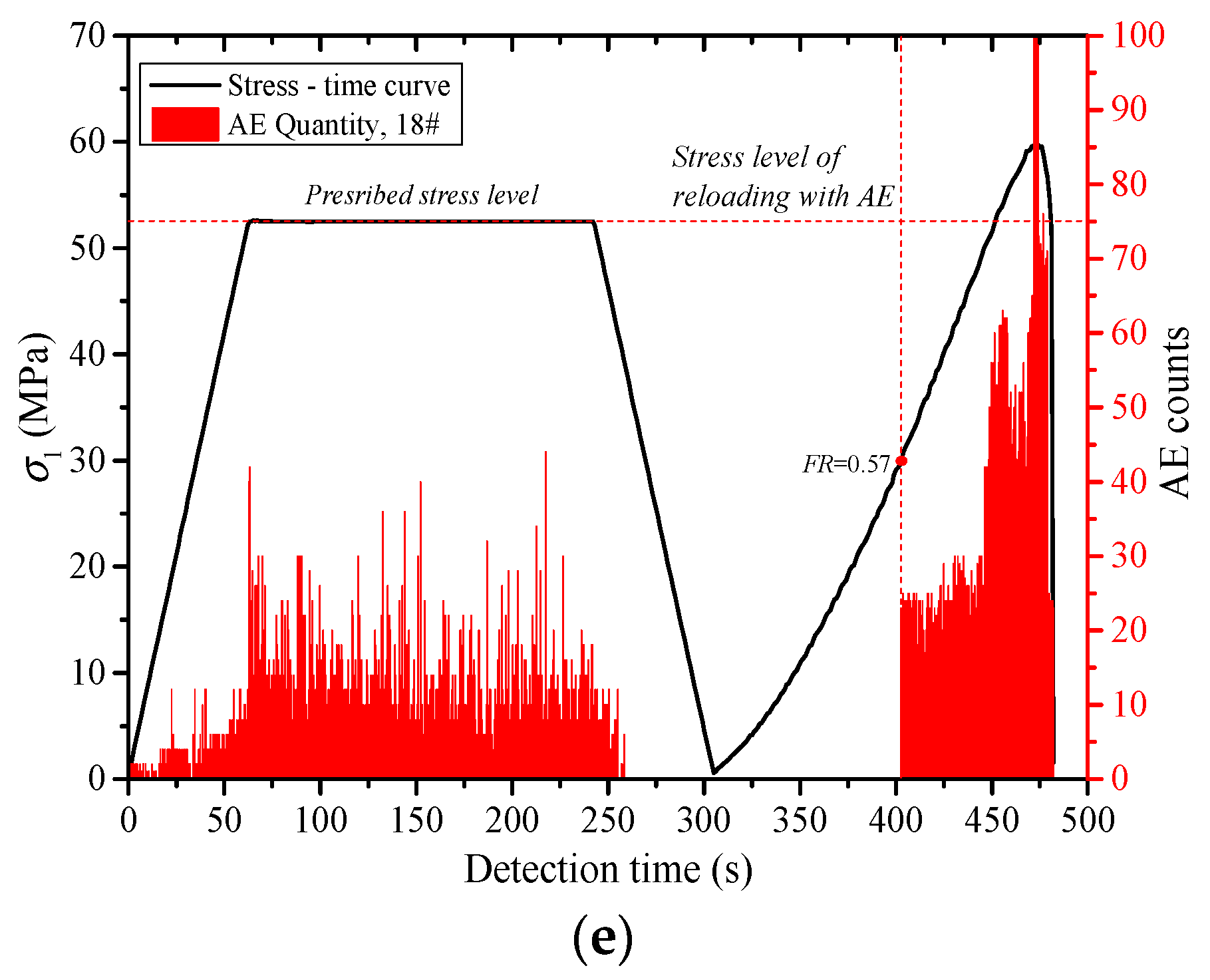 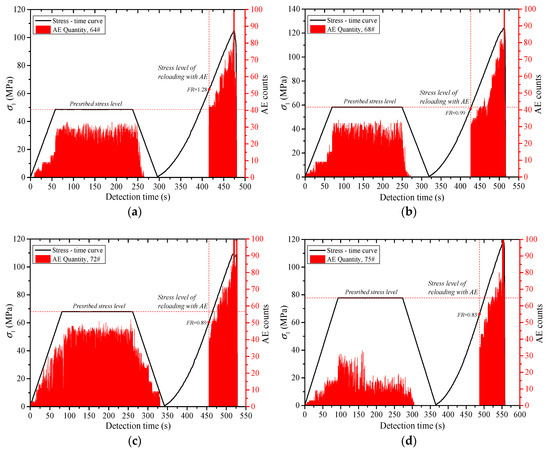 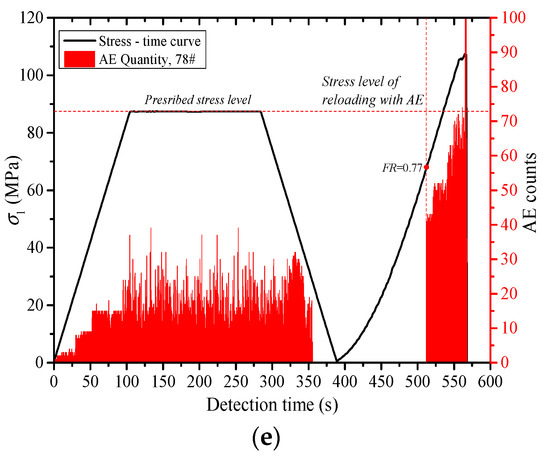 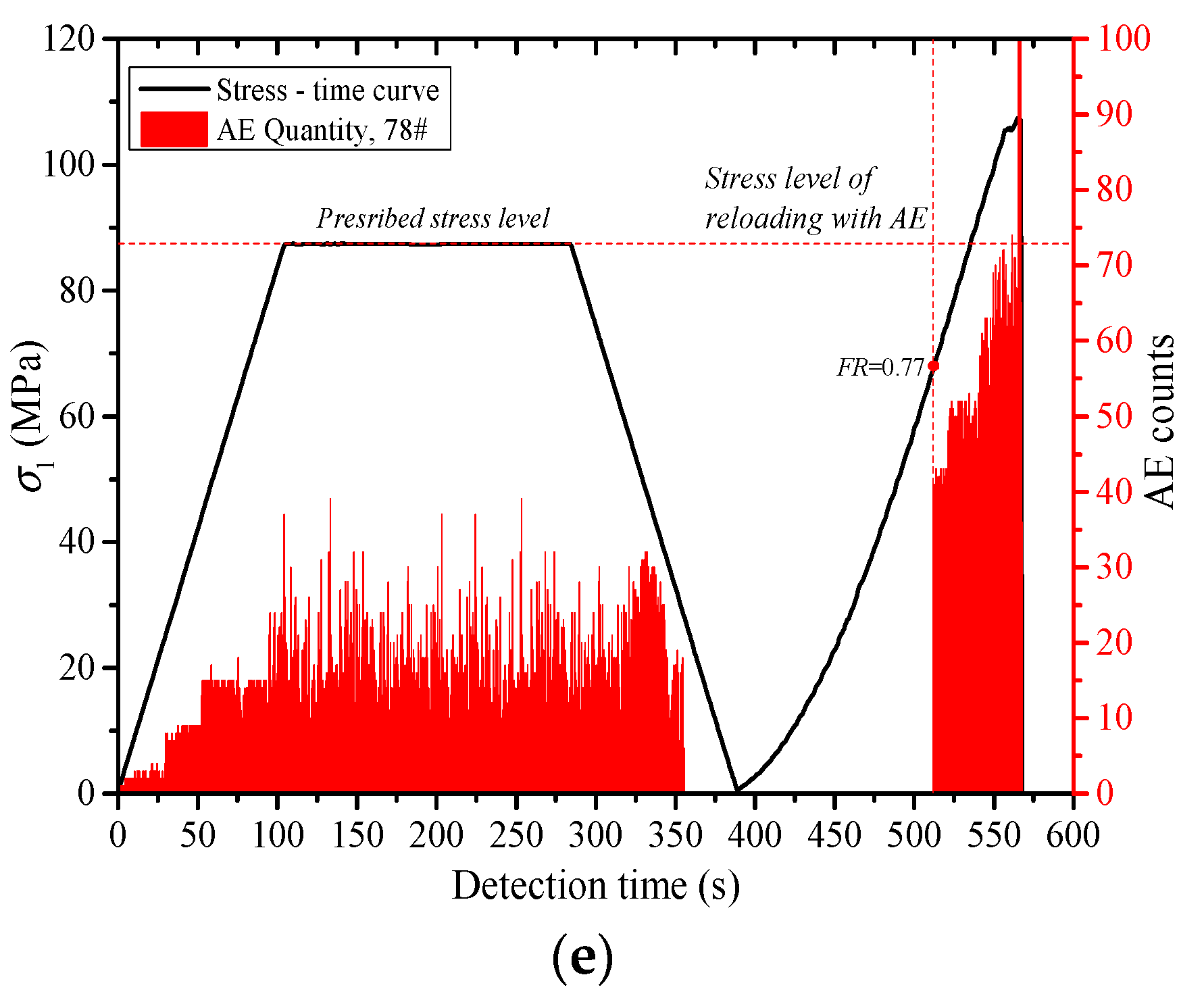 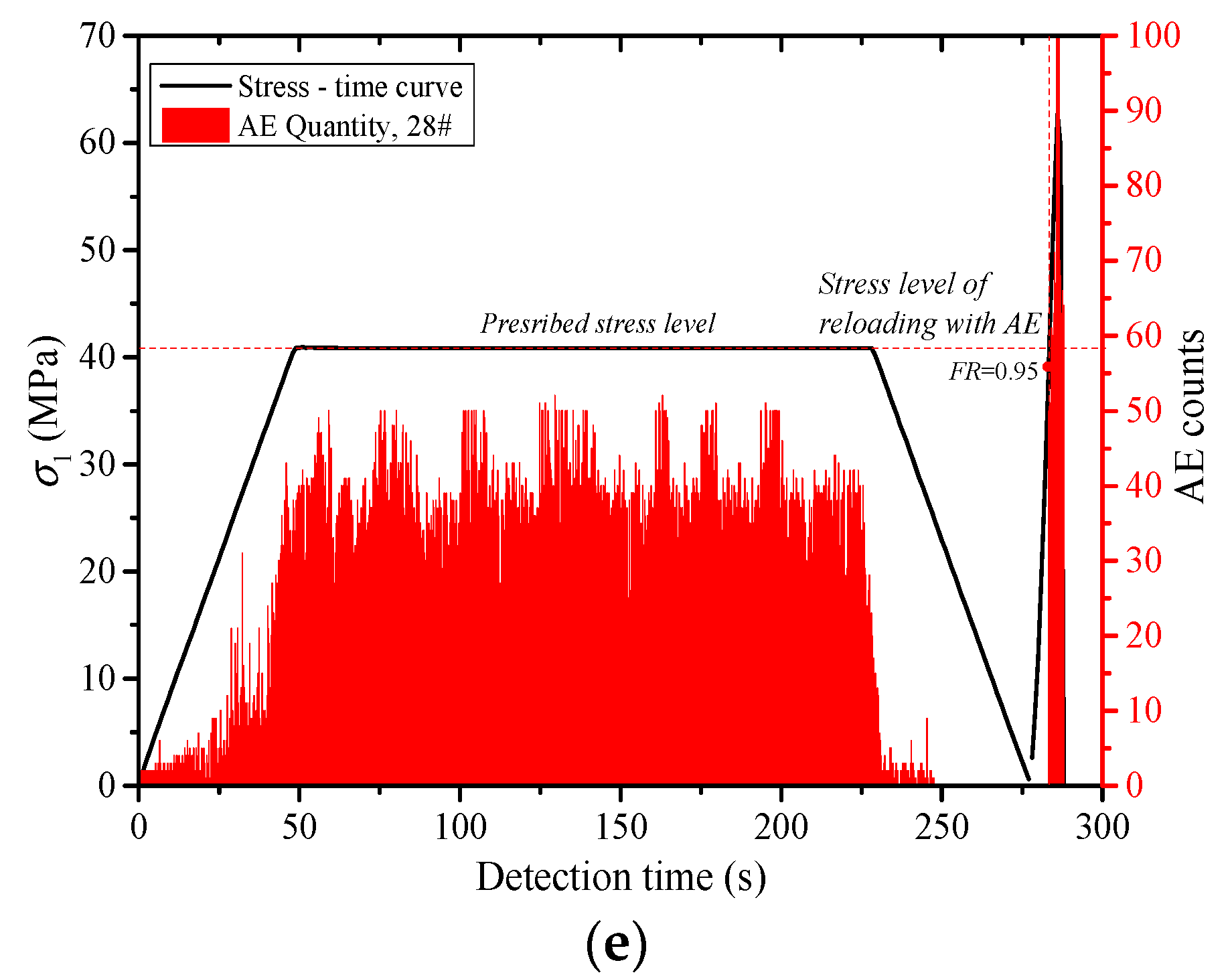 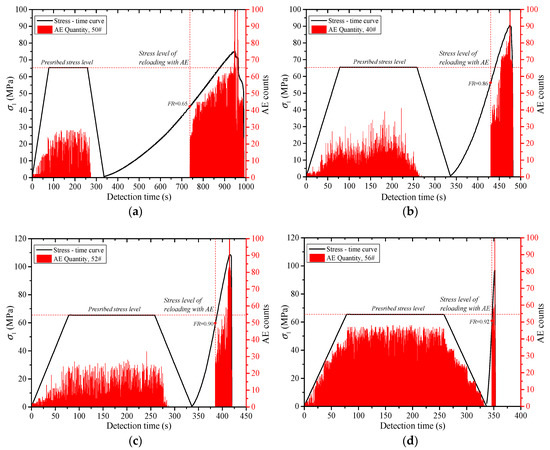 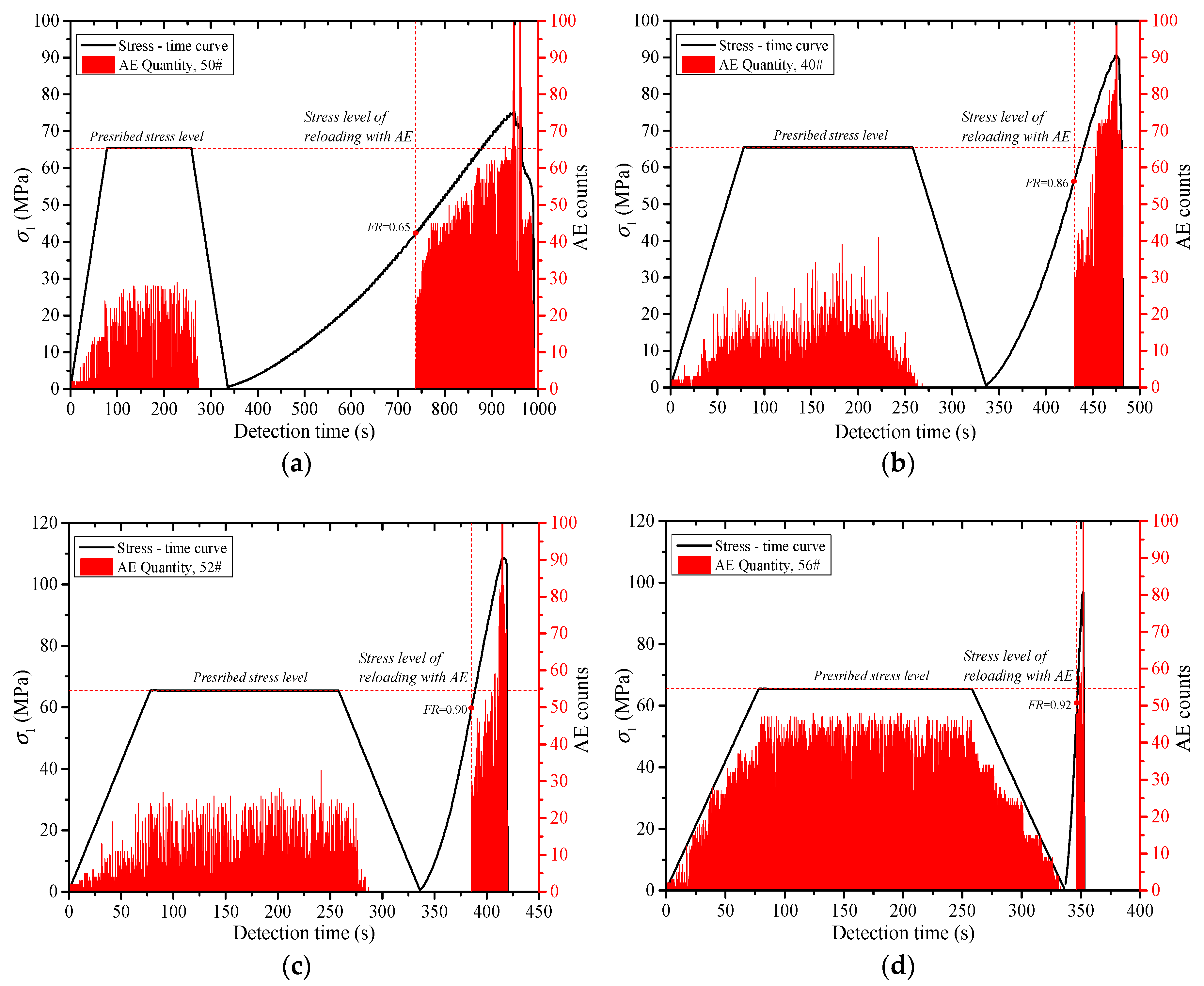