Small oil fields are expected to play an increasingly prominent role in the delivery of global crude oil production. As such, the Energy Return on Investment (EROI) parameter for three small offshore fields are investigated following a well-documented methodology, which is comprised of a “bottom-up” estimate for lifting and drilling energy and a “top-down” estimate for construction energy. EROI is the useable energy output divided by the applied energy input, and in this research, subscripts for “lifting”, “drilling”, and “construction” are used to differentiate the types of input energies accounted for in the EROI ratio. The EROILifting time series data for all three fields exhibits a decreasing trend with values that range from more than 300 during early life to less than 50 during latter years. The EROILifting parameter appears to follow an exponentially decreasing trend, rather than a linear trend, which is aligned with an exponential decline of production. EROILifting is also found to be inversely proportional to the lifting costs, as calculated in USD/barrel of crude oil. Lifting costs are found to range from 0.5 dollars per barrel to 4.5 dollars per barrel. The impact of utilizing produced gas is clearly beneficial and can lead to a reduction of lifting costs by as much as 50% when dual fuel generators are employed, and more than 90% when gas driven generators are utilized. Drilling energy is found to decrease as the field ages, due to a reduction in drilling intensity after the initial production wells are drilled. The drilling energy as a percentage of the yearly energy applied is found to range from 3% to 8%. As such, the EROILifting+Drilling value for all three fields approaches EROILifting as the field life progresses and the drilling intensity decreases. The construction energy is found to range from 25% to 63% of the total applied energy over the life of the field. View Full-Text
Keywords: oil and gas; energy accounting; EROI; energy intensity; lifting energy; drilling energy; construction energy; lifting cost oil and gas; energy accounting; EROI; energy intensity; lifting energy; drilling energy; construction energy; lifting cost
►▼ Show Figures 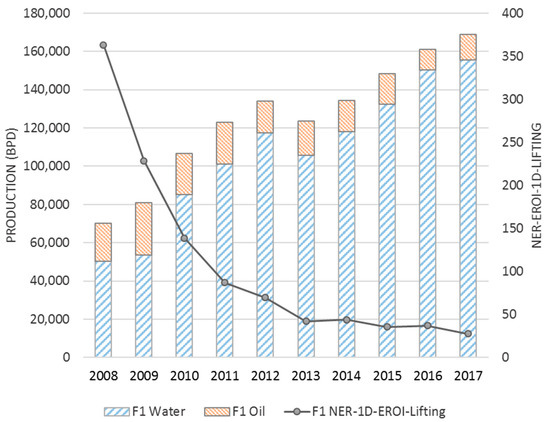