Analytical and Experimental Investigation of the Solar Chimney System

This paper presents a quantitative visualization study and a theoretical analysis of two-phase flow relevant to polymer electrolyte membrane fuel cells (PEMFCs) in which liquid water management is critical to performance. Experiments were conducted in an air-flow microchannel with a hydrophobic surface and a side pore through which water was injected to mimic the cathode of a PEMFC. Four distinct flow patterns were identified: liquid bridge (plug), slug/plug, film flow, and water droplet flow under small Weber number conditions. Liquid bridges first evolve with quasi-static properties while remaining pinned; after reaching a critical volume, bridges depart from axisymmetry, block the flow channel, and exhibit lateral oscillations. A model that accounts for capillarity at low Bond number is proposed and shown to successfully predict the morphology, critical liquid volume and evolution of the liquid bridge, including deformation and complete blockage under specific conditions. The generality of the model is also illustrated for flow conditions encountered in the manipulation of polymeric materials and formation of liquid bridges between patterned surfaces. The experiments provide a database for validation of theoretical and computational methods. View Full-Text
Keywords: PEM fuel cell; two-phase flow; liquid bridge; visualization; mathematical modeling PEM fuel cell; two-phase flow; liquid bridge; visualization; mathematical modeling
►▼ Show Figures 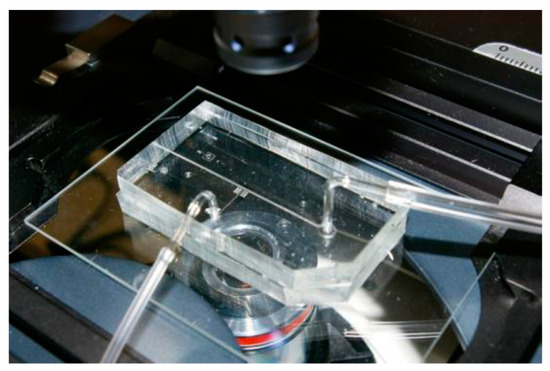