A Vine-Copula Based Voltage State Assessment with Wind Power Integration

In recent years, the growth rate of wind power installed capacity has been rapid [1]. However, the consumption of wind power has restricted its development seriously [2]. Both the randomness and volatility of wind power have a great impact on the operation of a system [3], especially with respect to the problem of voltage beyond limits. In addition, there is a complex correlation of wind speed in different regions, especially a positive correlation [4,5], which causes serious voltage fluctuation problems. Therefore, the study of voltage state assessment with large-scale wind power integration is of great significance, and we must consider the uncertainty and correlation of wind speed in different regions.
In this paper, we firstly apply the vine-copula function to the voltage state assessment method with large-scale wind power integration. Therefore, the characteristics of the vine-copula function are discussed in the introduction.
The vine-copula function is an improved algorithm of the copula function. The copula function is an effective tool for constructing a joint probability distribution of multi-dimensional random variables [6]. It is actually a function that connects the joint distribution function of variables with their respective edge distribution functions. The related theory could be traced back to 1959, when Sklar linked the multivariate edge distribution using the copula function. In the 1990s, the copula function was used in the financial field [7], and in recent years the copula function has been applied to the study of power systems such as the probabilistic optimal power flow [8], probabilistic power flow [9] and risk assessment [10].
However, the traditional copula model could only describe the nonlinearity, asymmetry and tail correlation between two random variables, and building higher-dimensional copula is generally recognised as a difficult problem. Limited by this reason, vine-copula was proposed by Kjersti Aas [11]. In [11], a pair-copula decomposition is used in the vine-copula function, which is represented a more flexible and intuitive way of extending bivariate copula to higher dimensions. Multivariate data exhibiting complex patterns of dependence in the tails could be modelled using the vine-copula function. This function allows inference on the parameters of the pair-copulae on various levels of the construction. This construction is hierarchical in nature, the various levels standing for growing conditioning sets, incorporating more variables.
The paper is organized as follows. A literature review is presented in Section 2. The output power model of a wind farm, the wind speed distribution model of a region and wind speed joint distribution model of multiple regions are presented in Section 3. In Section 4, a probabilistic load flow based on the semi-invariant method and wind speed independent transformation based on the Rosenblatt transformation are described first. Then, a voltage state assessment index is established, and a voltage state assessment procedure is proposed. Section 5 provides the case study of IEEE 24-node power system and the east Inner Mongolia power system for voltage state assessment with large-scale wind power integration, the simulation results are presented to verify the effectiveness of the proposed voltage state assessment method.

Wind energy is a clean and renewable energy. Wind speed is the main factor that determines the output of wind farms. In this paper, we suppose that the wind speed in a region obeys the same distribution, and different wind farms in a region use this wind speed as input. Nowadays, studies mostly use the Weibull distribution to describe the wind speed of a region [20]. However, the shape factor and scale factor of a Weibull distribution is hard to confirm accurately in different regions. Therefore, the best description of wind speed distribution is to use its actual data for probability statistics analysis. Non-parametric kernel density estimation makes no use of prior knowledge about data distribution, nor attaches any assumptions to the data distribution. This is a method to study the data distribution characteristics from data itself. Therefore, it is highly valued in statistical theory and more applied fields. In this paper, non-parametric kernel density estimation is applied to fit wind speed distribution using wind speed samples, and its expression is as follows: where Kh is the kernel function, N is the sequence capacity, Xi is the wind speed sample, i = 1, 2,…, N.

In this paper, voltage state assessment is based on probabilistic load flow. Two main random factors considered in probabilistic load flow calculation include load and wind turbine output. Among them, the probabilistic model of load adopts the truncated normal distribution in [23], and we suppose the loads in different nodes are independent. The vine-copula model is adopted to describe the probabilistic characteristics of wind farm output.
The probabilistic load flow can be calculated using semi-invariant and Gram-Charlier series expansion methods, which linearize the load flow equation at a reference operation point, and obtain the sensitivity matrix of state vector (such as voltage) to random perturbation vector (such as power input). The linearization method of load flow equation at the reference operation point is as follows: where V denotes the node voltage vector, V0 denotes the node voltage vector at reference operation point, denotes the node voltage change vector, S0 denotes the sensitivity matrix of voltage to power input, denotes the random perturbation vector of power input in different nodes.
Equation (9) is a linear transformation of the random variables. The distribution of could be obtained from the distribution of by convolution calculation. Assuming that the random perturbation vector of power input () in different nodes is independent (we have already suppose the load in different nodes are independent, so random perturbation vector of load is in different nodes are independent, although wind speed and wind farm output are correlated, we would transform them to independent random variable in Section 3.2), convolution could be reduced to a few semi-invariant algebra operations using the nature of the semi-invariant, and we will obtain the semi-invariants of in different orders. After that, the probability density function of the state variables could be calculated by using the Gram-Charlier series expansion. Let denote k-order semi-invariant of , then the probability density function and distribution function could be expressed as follows using Gram-Charlier series expansion, where denotes probability density function of standard normal distribution, is the n-order derivative of , A1, A2,…, An denote the coefficients of the Gram-Charlier series, which are expressed as follows (we only show the first eight orders and this could meet the engineering accuracy requirements),

The core of voltage state assessment with large-scale wind power integration is to establish wind speed joint distribution model of multiple regions using the vine-copula function, and generate independent samples which satisfy the correlated conditions. Then, the semi-invariants of node voltage are obtained on the basis of the linear power flow equation and homogeneity/additivity of semi-invariants, Finally, the probability density function and distribution function of node voltage is calculated by the Gram-Charlier series expansion method. The calculation steps are as follows:
(1) Calculate the distribution function of wind speed of each region using non-parametric kernel density estimation according to historical measurement data of wind speed.
(2) Select the appropriate copula function according to Section 3.3 according to the relationship between wind speeds in different regions, and establish their wind speed joint distribution model using vine copula.
(3) A sampling technique (such as Monte Carlo sampling, random sampling) is used to generate correlation wind speed samples according to the vine copula function.
(4) Convert the correlated wind speed samples to independent wind speed samples using the Rosenblatt transform.
(5) Calculate node voltage using probabilistic load flow based on semi-invariant method.

In this section, the case study of IEEE 24 power system and the east Inner Mongolia power system for voltage state assessment with large-scale wind power integration are provided. The proposed method is achieved by programing in Matrix Laboratory (MATLAB, 2015b, The MathWorks, Inc., Natick, MA, USA).

5.1.2. Effectiveness Verification of the Proposed Method

This paper uses C-vine to decompose joint distribution, and region A is regarded as the root node. The maximum likelihood estimation method is used in non-parametric kernel density estimation based probability density function of the two regions to obtain the correlation coefficient. The correlation coefficient of different copulas is shown in Table 5. On this basis, the probability density function of different copula types are shown in Figure 8.
In order to select the optimal copula function, this paper compares the Euclidean distance of empirical copula function and the evaluated copula function (including normal copula, t copula, gumbel copula, clayton copula and frank copula). The calculation results are shown in Table 6. From this table, we can see which Euclidean distance of the empirical copula function and gumbel copula in two different regions is smallest, so we select the gumbel copula as the optimal copula function.

(1)
This paper selected the vine-copula function to describe joint probability density of wind speeds with correlation and randomness, and the result is basically the same as that of an actual joint probability density function, and the error is under 1%, which could illustrate vine-copula’s effectiveness to construct a joint probability density of multi-dimensional random variables.
(2)
The node voltage calculation method using probabilistic load flow based on the semi-invariant method and the Monte Carlo method are basically consistent, where the expectation average error is under 0.2% and the standard deviation average error is under 1%, and this could illustrate that the proposed method is effective in the statistical characteristics of the output variables.
(3)
This paper firstly selected the vine-copula function and probabilistic load flow to assess the voltage state, and the precision of the voltage distribution function is very high compared with the traditional and improved three point estimate methods, which further proves that the proposed method has higher precision.

X.C. put forward the research direction. J.H. completed the principle analysis and the method design, performed the simulation, and drafted the article. T.Z., P.Z., S.M. organized the research activities, provided theory guidance, and completed the revision of the article. S.D. analyzed the simulation results. All six were involved in revising the paper. 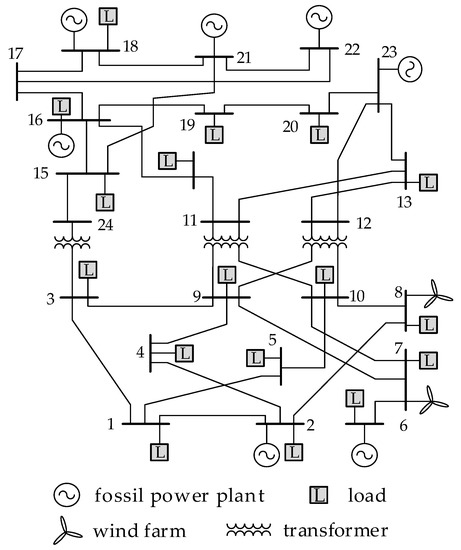 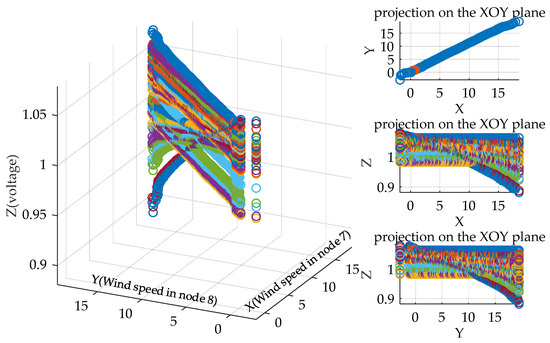 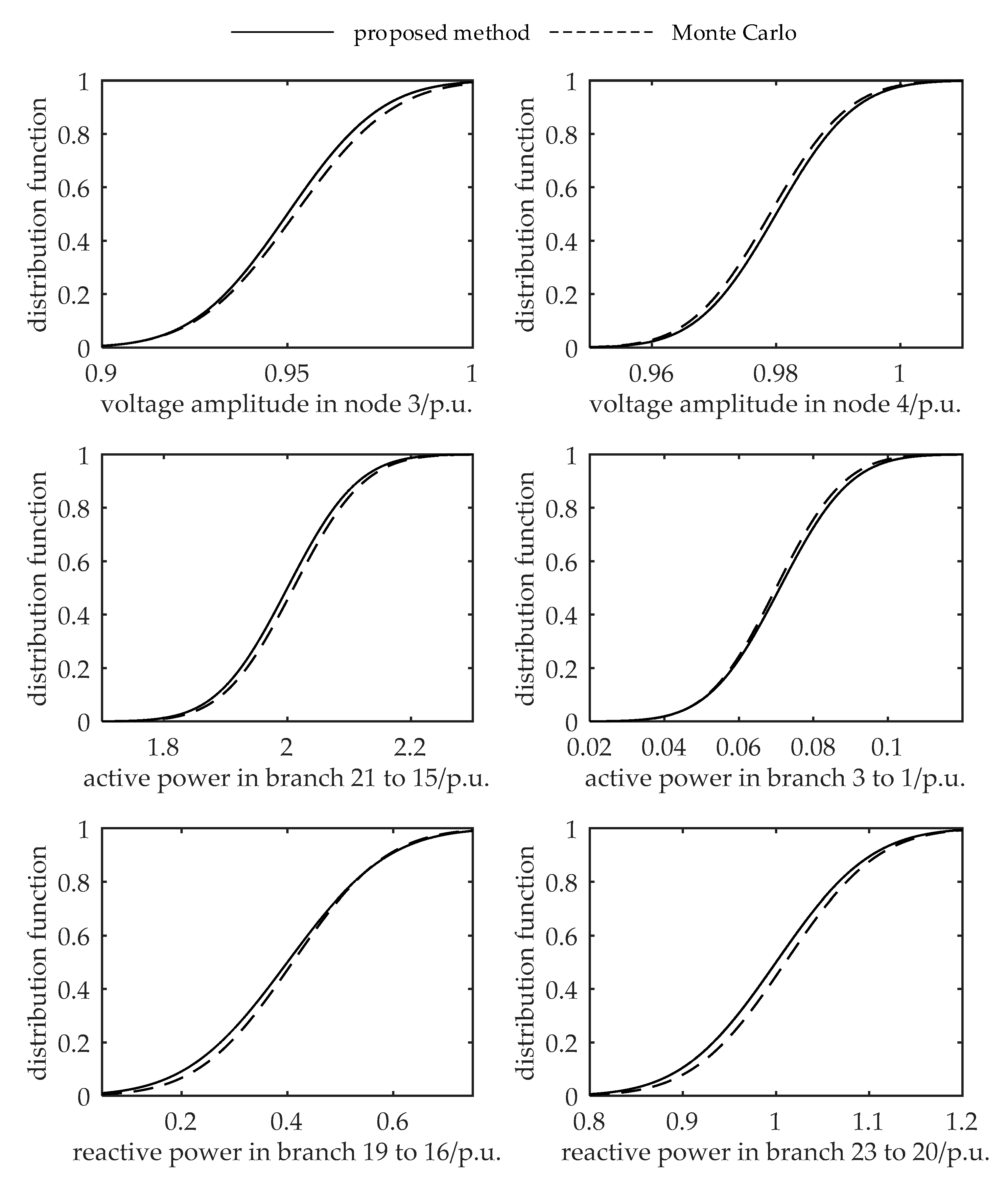 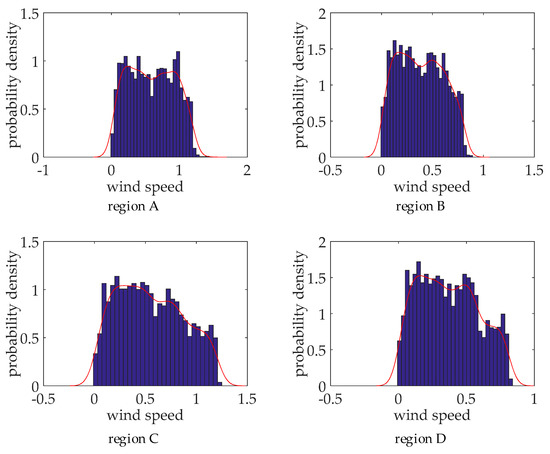 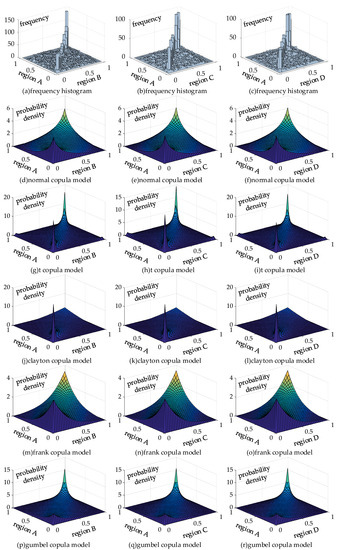 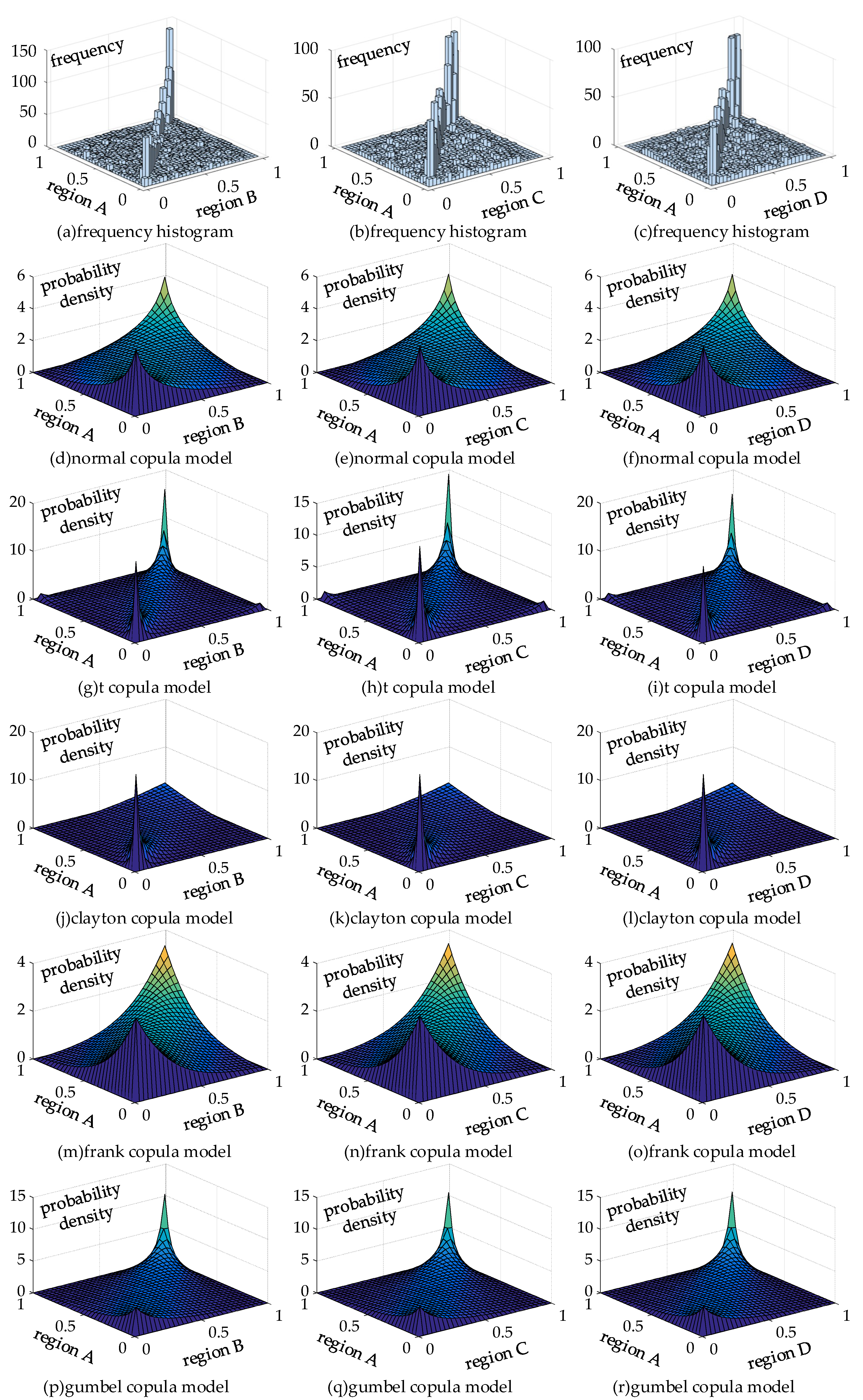 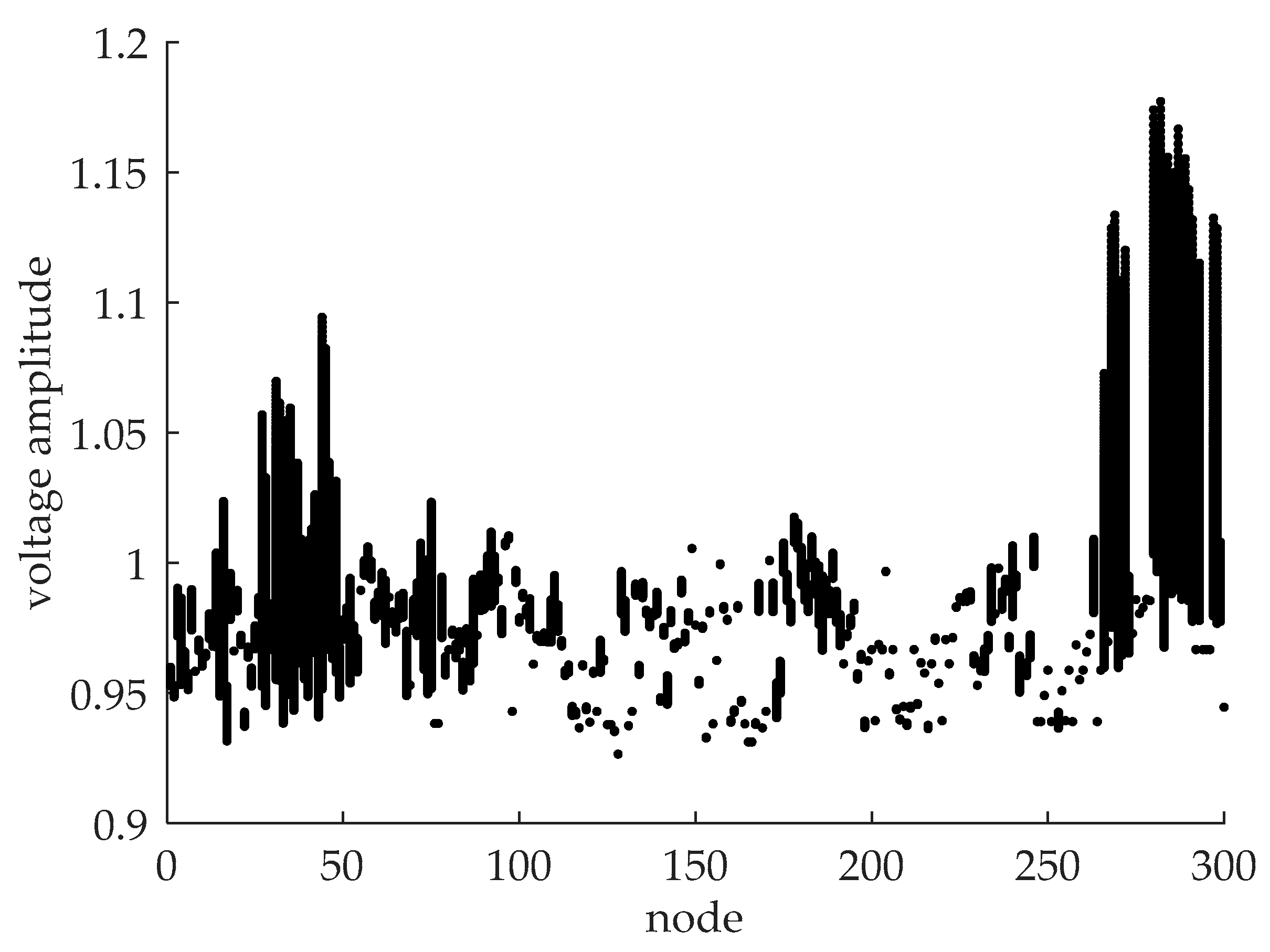 Table 10. Node voltage exponential entropy results.
Table 10. Node voltage exponential entropy results.
© 2019 by the authors. Licensee MDPI, Basel, Switzerland. This article is an open access article distributed under the terms and conditions of the Creative Commons Attribution (CC BY) license (http://creativecommons.org/licenses/by/4.0/).
We use cookies on our website to ensure you get the best experience. Read more about our cookies here.
Accept
We have just recently launched a new version of our website. Help us to further improve by taking part in this short 5 minute survey here. here.
Never show this again