Identifying the Drivers of Wind Capacity Additions: The Case of Spain. A Multiequational Approach

An abundant volume of literature has been devoted to the analysis of the drivers of renewable electricity capacity additions in general and wind energy in particular. Nevertheless, whereas the direct influence of several explanatory variables has been considered, indirect effects, which refer to impacts of explanatory variables on another explanatory variable which, in turn, influence capacity additions, have been neglected. However, those effects need to be taken into account in order to properly grasp the full influence of the explanatory variables in general, and the policy variable in particular, on capacity additions (whether in wind energy generation or other energy systems). The aim of this paper is to identify the drivers of wind energy capacity additions. Based on data over the 1998–2015 period for Spain, a country with a substantial deployed wind capacity, we estimate a three-stage least squares multiecuational econometric model, which allows the analysis of direct and indirect effects as mediated by their influence on intermediate variables. Our results show that, as expected, wind capacity additions are positively and significantly driven by renewable energy support and negatively driven by the material costs of wind energy. Other variables are related to capacity additions in an indirect manner, i.e., through their influence on intermediate variables, i.e., electricity demand and electricity prices. This includes the positive impact of GDP, wind share, capacity load and price of oil. Others have a negative impact (tax share in the electricity price and electricity transport costs). Finally, no statistically significant relationship can be observed for the risk premium, interest rates and the price of gas. Our findings suggest that the success of renewable energy policy instruments might be contingent upon the level of other variables and, particularly, electricity consumption. View Full-Text
Keywords: installed capacity; drivers; Spain; multi-equational model; wind on-shore installed capacity; drivers; Spain; multi-equational model; wind on-shore
►▼ Show Figures 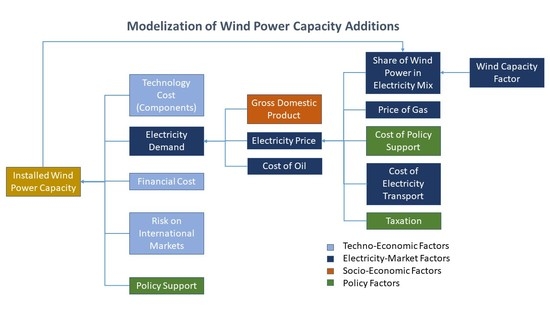