The Effect of a Wave Energy Farm Protecting an Aquaculture Installation

:
This paper assesses the impact of a farm of wave energy converters on a nearby offshore aquaculture installation and on the nearshore dynamics. The coastal area targeted is Aguçadoura, located in the north of Portugal, where the world’s first wave farm operated in 2008. The study is focused mainly on the evaluation of the sheltering effect provided by the wave farm to the aquaculture cages. Furthermore, the possible impact on the coastal wave climate of such an energy park is also evaluated. These objectives are accomplished by performing simulations, corresponding to the wave conditions, which are more often encountered in that coastal environment. The SWAN model (Simulating WAves Nearshore) was adopted for this. Various transmission scenarios are considered to account for the impact of different types of wave converter farms on the downwave conditions. The results show that such a wave energy park might have a clear positive impact on the wave conditions fish farm installed downwave and it might also have a beneficial influence on shoreline dynamics from the perspective of coastal protection.
Keywords:
wave energy farm; aquaculture; SWAN; sheltering effect; nearshore protection

2. Modelling the Wave Propagation in the Target Area

3. Analysis of Four Case Studies Considered for the Wave Propagation

4. Analysis of the Results and Discussion

As the results presented in Figure 4 and Figure 5 clearly indicate, the fish farm has a small local impact on wave propagation. Moreover, this is completely attenuated at shoreline level, for all the situations considered. Nevertheless, it must be highlighted that SWAN model simulations have been also carried out without including the influence of the fish farm, but the results were not represented in a separate figure due to the similar results at the coastline level when the fish farm is considered, whose effect on the wave field is only local. The next discussions will be focused first on the local impact, especially on the sheltering effect of the wave energy farm to the fish farm located downwave, and second the expected impact on the wave conditions at the shoreline level.

4.1. Influence of the WECs on the Fish Farm

4.2. Influence of the WECs on the Coast

The target area considered in the present study is the coastal environment of Aguçadoura, situated in the northern part of the Portuguese coastal environment. This is a very representative location from the point of view of the ocean energy extraction, in such a way that the world’s first wave farm was tested here in 2008. The possibility to install a fish farm downwave of the energy farm with the purpose of being sheltered from the wave conditions was analyzed. This is a good strategy to consider, while the wave farm producing electricity is simultaneously protecting the fish farm, which in turn increases the viability of aquaculture offshore and decreases the possibility of the structures being damaged.
From this perspective, the local and coastal impact on the wave conditions of the ocean farm was assessed, considering various transmission scenarios, and performing simulations with a wave modelling system, based on the SWAN third-generation spectral phase averaged model. The results showed that the wave farm provides a sheltering effect to the fish farm, increasing in this way its safety. There is an improvement related to the classification of the degree of equipment exposure, e.g., for CS2 in the situation of average wave condition (A) it passed from class 4 (high exposure) to class 3 (medium exposure).
Besides this, the results coming from this work also indicate that a relative decrease in terms of significant wave height is expected at shoreline level, depending on the characteristics of the wave farm, and this might represent a viable solution for coastal protection.

All authors contributed to the writing. D.S. and E.R. performed the calculations.

This work was performed within the Strategic Research Plan of the Centre for Marine Technology and Ocean Engineering (CENTEC), which is financed by Portuguese Foundation for Science and Technology (Fundação para a Ciência e Tecnologia-FCT) under contract UID/Multi/00134/2013-LISBOA-01-0145-FEDER-007629. 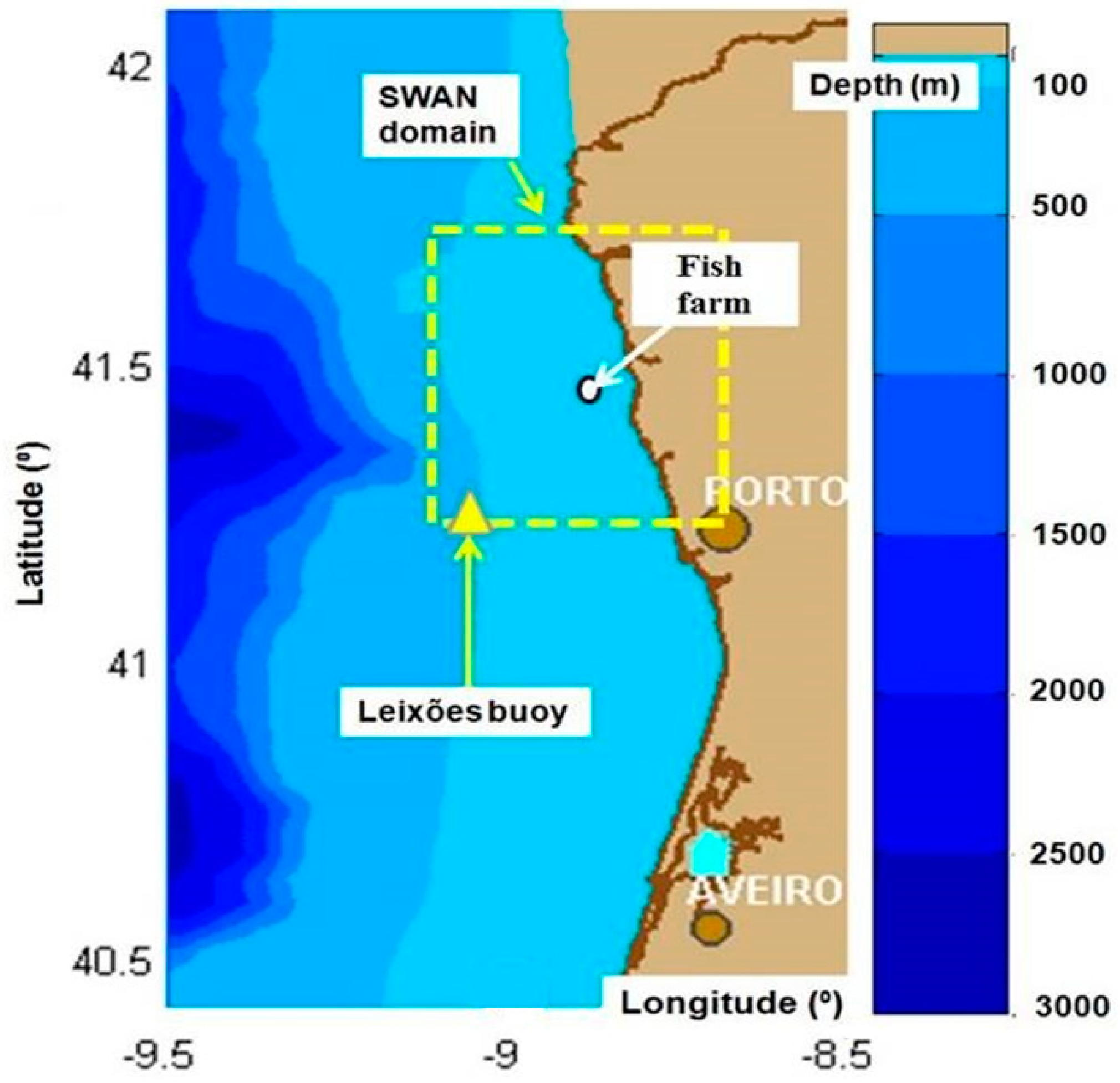