Energy Revolution for Our Common Future: An Evaluation of the Emerging International Renewable Energy Law

Fatty acid esterification with alcohols is a crucial step in biodiesel synthesis. Biodiesel consists of long-chain alkyl esters that derive from the transesterification or hydro-esterification of the triglycerides that are contained in vegetable oils. In the first route, the esterification of the free fatty acids is an important pretreatment of the feed; in the second, it is the main reaction of the industrial process. Knowledge of appropriate kinetic models for the catalytic esterification of fatty acids with alcohols is critical in the design of biodiesel synthesis processes. In this work, the kinetic behavior of the reversible esterification of lauric, myristic, palmitic and stearic acid, which are the most common saturated fatty acids that are contained in triglyceride feedstocks for biodiesel, with methanol at different temperatures (70–150 °C) and molar ratios of the reactants (1:1–1:2–1:5) was investigated in a batch laboratory basket reactor both in the presence and absence of Amberlyst-15 as the catalyst. Results obtained with Amberlyst-15 were fitted through a ready-to-use pseudo-homogeneous reversible model suitable for process design. The kinetic model was compared with that obtained in a previous work with niobium oxide as the catalyst. With respect to the results that were obtained with niobium oxide, the influence of the chain length of the acid on the kinetic behavior was strongly reduced in the presence of Amberlyst-15. This phenomenon was ascribed to a different catalytic mechanism. View Full-Text
Keywords: sulfonated cation-exchange resins; acid heterogeneous catalyst; free-fatty-acid (FFA) esterification; biodiesel production; pseudo-homogeneous reversible kinetics sulfonated cation-exchange resins; acid heterogeneous catalyst; free-fatty-acid (FFA) esterification; biodiesel production; pseudo-homogeneous reversible kinetics
►▼ Show Figures 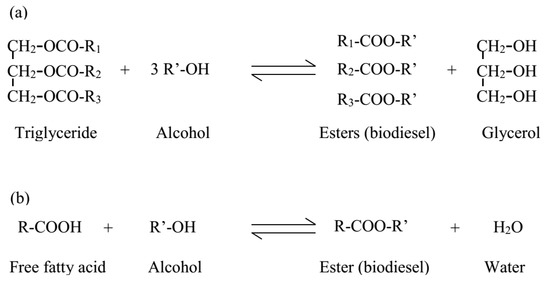 Banchero, M.; Gozzelino, G. A Simple Pseudo-Homogeneous Reversible Kinetic Model for the Esterification of Different Fatty Acids with Methanol in the Presence of Amberlyst-15. Energies 2018, 11, 1843.


Banchero M, Gozzelino G. A Simple Pseudo-Homogeneous Reversible Kinetic Model for the Esterification of Different Fatty Acids with Methanol in the Presence of Amberlyst-15. Energies. 2018; 11(7):1843.


Banchero, Mauro; Gozzelino, Giuseppe. 2018. "A Simple Pseudo-Homogeneous Reversible Kinetic Model for the Esterification of Different Fatty Acids with Methanol in the Presence of Amberlyst-15." Energies 11, no. 7: 1843.