The year 2014 marked hydrogen fuel cell electric vehicles (FCEVs) first becoming commercially available in California, where significant investments are being made to promote the adoption of alternative transportation fuels. A refueling infrastructure network that guarantees adequate coverage and expands in line with vehicle sales is required for FCEVs to be successfully adopted by private customers. In this paper, we provide an overview of modelling methodologies used to project hydrogen refueling infrastructure requirements to support FCEV adoption, and we describe, in detail, the National Renewable Energy Laboratory’s scenario evaluation and regionalization analysis (SERA) model. As an example, we use SERA to explore two alternative scenarios of FCEV adoption: one in which FCEV deployment is limited to California and several major cities in the United States; and one in which FCEVs reach widespread adoption, becoming a major option as passenger vehicles across the entire country. Such scenarios can provide guidance and insights for efforts required to deploy the infrastructure supporting transition toward different levels of hydrogen use as a transportation fuel for passenger vehicles in the United States. View Full-Text
Keywords: alternative fuels; hydrogen; fuel cell electric vehicles; refueling infrastructure alternative fuels; hydrogen; fuel cell electric vehicles; refueling infrastructure
►▼ Show Figures 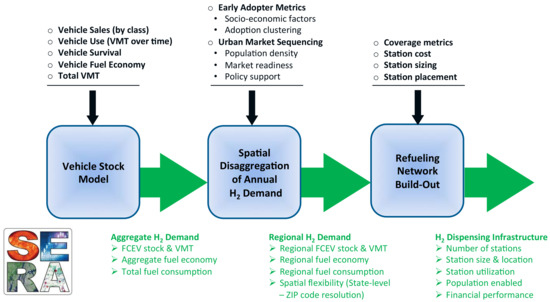