This paper presents the concept of the impact of harmonic distortion on a digital protection relay. The aim is to verify and determine the reasons of a mal-trip or failure to trip the protection relays; the suggested solution of the harmonic distortion is explained by a mathematical model in the Matlab Simulink programming environment. The digital relays have been tested under harmonic distortions in order to verify the function of the relays algorithm under abnormal conditions. The comparison between the protection relay algorithm under abnormal conditions and a mathematical model in the Matlab Simulink programming environment based on injected harmonics of high values is provided. The test is separated into different levels; the first level is based on the harmonic effect of an individual harmonic and mixed harmonics. The test includes the effect of the harmonics in the location of the fault point into distance protection zones. This paper is a new proposal in the signal processing of power quality disturbances using Matlab Simulink and the power quality impact on the measurements of the power system quantities; the test simulates the function of protection in power systems in terms of calculating the current and voltage values of short circuits and their faults. The paper includes several tests: frequency variations and decomposition of voltage waveforms with Fourier transforms (model) and commercial relay, the effect of the power factor on the location of fault points, the relation between the tripping time and the total harmonic distortion (THD) levels in a commercial relay, and a comparison of the THD capture between the commercial relay and the model. View Full-Text
Keywords: protection relay; Simulink; Matlab; Omicron CMC 256plus; power quality; enerlyzer; comtrade; distance protection protection relay; Simulink; Matlab; Omicron CMC 256plus; power quality; enerlyzer; comtrade; distance protection
►▼ Show Figures 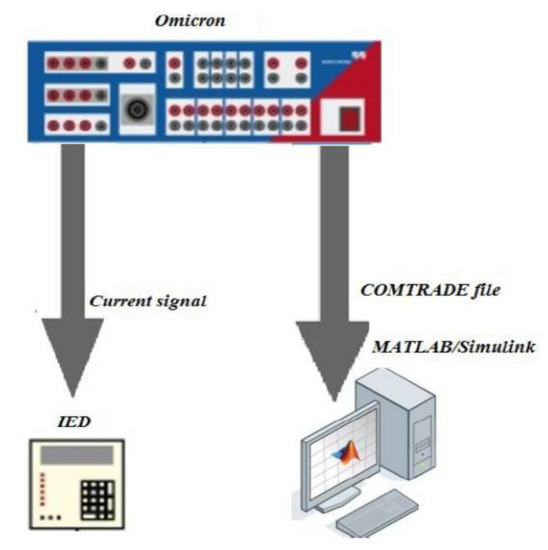