The configuration of conventional high-speed Permanent Magnet Synchronous Motors (PMSMs) is usually long and thin, with overlong axial end winding lengths, which is not suitable for those applications that place severe restrictions on the axial length, such as pulsed alternators. This paper first studied the key design aspects of a flat-structure high-speed PMSM. The toroidal-windings, low-conductivity material of the retaining sleeve, large airgap and segmentation of magnets were studied to reduce the axial length of the motor. The division of the stator and the employment of a non-magnetic outer stator were used to improve overall performance. Then the losses of the prototype were calculated and the factors having an influence on the losses were also investigated, after which, their effects on the total loss were evaluated. The total loss could be effectively reduced by the decrease of strand number of conductors and the division of stator, while only being slightly reduced by epoxy resin pole fillers. Metal-stack pole fillers have the same effect on the reduction of rotor loss as epoxy resin, while maintaining the good thermal-conductivity of metal. In addition, the influence of the carrier frequency of the inverter on the losses was analyzed, and it was found that high carrier frequency was helpful to reduce rotor losses. Finally, a small-scale prototype was manufactured and the experimental results were provided. View Full-Text
Keywords: high-speed PMSM; toroidal winding; copper loss; iron loss; rotor loss; carrier frequency high-speed PMSM; toroidal winding; copper loss; iron loss; rotor loss; carrier frequency
►▼ Show Figures 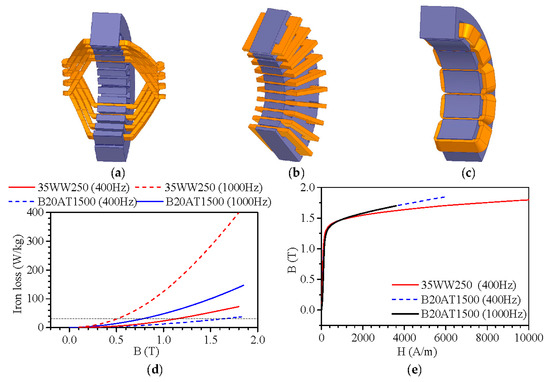