Bedded pack manure has long been considered an unsuitable feedstock for conventional anaerobic digestion systems due to its high solids content. However, solid-state anaerobic digestion (SS-AD) provides an opportunity to generate methane from such high-solids feedstocks. This study was conducted to determine the influence of moisture content on the digestion of bedded pack dairy manure using SS-AD. Mixtures of sawdust bedding and dairy manure were prepared with moisture contents (MCs) of 70, 76, and 83% and digested at 37 °C for 85 days. The performance of digesters containing manure at 83% MC was 1.3 to 1.4-fold higher than that of digesters containing 70% MC manure in terms of volatile solids (VS) reduction and biogas production. VS reduction rates were 55 to 75% and cumulative methane yield ranged from 64 to 90 NmL (gVS)−1. These values are lower than those from SS-AD of fresh manure and this is likely due to the partial decomposition of biodegradable materials during the two to three-month period before the manure was removed from the barn. However, in terms of efficient management of farm odors and providing a renewable energy source for heating, SS-AD of bedded pack manure offers a potential alternative to the conventional composting systems currently in use. View Full-Text
Keywords: dairy manure; solid-state anaerobic digestion; moisture content; biogas; methane dairy manure; solid-state anaerobic digestion; moisture content; biogas; methane
►▼ Show Figures 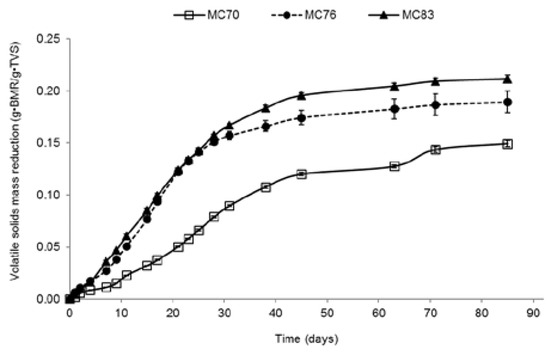