Assessment and Public Reporting of Geothermal Resources in Germany: Review and Outlook

The theory of Thermal Response Testing (TRT) is a well-known part of the sizing process of the geothermal exchange system. Multiple parameters influence the accuracy of effective ground thermal conductivity measurement; like testing time, variable power, climate interferences, groundwater effect, etc. To improve the accuracy of the TRT, we introduced a procedure to additionally analyze falloff temperature decline after the power test. The method is based on a premise of analogy between TRT and petroleum well testing, since the origin of both procedures lies in the diffusivity equation with solutions for heat conduction or pressure analysis during radial flow. Applying pressure build-up test interpretation techniques to borehole heat exchanger testing, greater accuracy could be achieved since ground conductivity could be obtained from this period. Analysis was conducted on a coaxial exchanger with five different power steps, and with both direct and reverse flow regimes. Each test was set with 96 h of classical TRT, followed by 96 h of temperature decline, making for almost 2000 h of cumulative borehole testing. Results showed that the ground conductivity value could vary by as much as 25%, depending on test time, seasonal period and power fluctuations, while the thermal conductivity obtained from the falloff period provided more stable values, with only a 10% value variation. View Full-Text
Keywords: shallow geothermal resource; borehole heat exchanger; thermal response test; TRT shallow geothermal resource; borehole heat exchanger; thermal response test; TRT
►▼ Show Figures 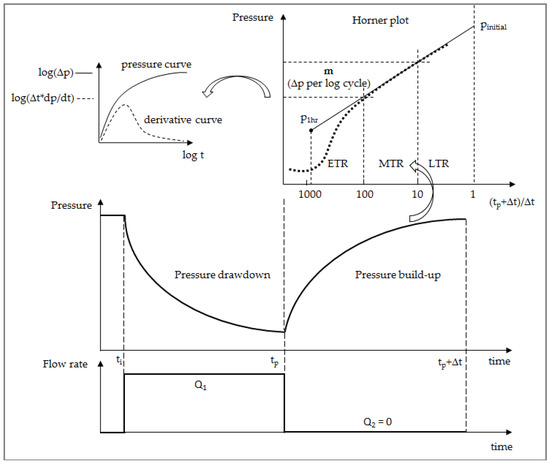