Effect of the Implementation of Carbon Capture Systems on the Environmental, Energy and Economic Performance of the Brazilian Electricity Matrix
Previous Article in Journal

Energy policies established in 2005 have made Portugal one of the top renewable power producers in Europe, in relative terms. Indeed, the country energy dependence decreased since 2005, although remaining above EU-19 and EU-28 countries in 2015 (77.4% vs. 62.4% vs. 54.0%, respectively). Data collected from governmental, statistical, and companies’ reports and research articles shows that renewables and natural gas assumed a growing importance in the Portuguese energy mix along time, while oil followed an opposite trend. Recently, the country remarkably achieved a full 70-h period in which the mainland power consumed relied exclusively on renewable electricity and has several moments where power production exceeds demand. Currently, the main option for storing those surpluses relies on pumped hydro storage plants or exportation, while other storage alternatives, like Power-to-Gas (PtG), are not under deep debate, eventually due to a lack of information and awareness. Hence, this work aims to provide an overview of the Portuguese energy sector in the 2005–2015 decade, highlighting the country’s effort towards renewable energy deployment that, together with geographic advantages, upholds PtG as a promising alternative for storing the country’s renewable electricity surpluses. View Full-Text
Keywords: CO2 capture and utilization; energy dependence; power-to-methane; synthetic natural gas; renewable power; fossil fuels CO2 capture and utilization; energy dependence; power-to-methane; synthetic natural gas; renewable power; fossil fuels
►▼ Show Figures 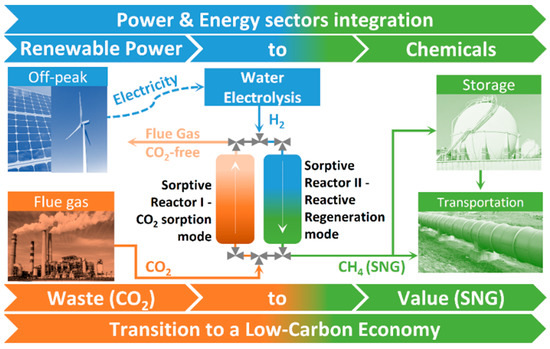 Miguel, C.V.; Mendes, A.; Madeira, L.M. An Overview of the Portuguese Energy Sector and Perspectives for Power-to-Gas Implementation. Energies 2018, 11, 3259.


Miguel CV, Mendes A, Madeira LM. An Overview of the Portuguese Energy Sector and Perspectives for Power-to-Gas Implementation. Energies. 2018; 11(12):3259.