The main goal of short-term planning of hydro-thermal system is determining the optimal power generation of the hydro and thermal plants so as to minimize the total operation cost of the thermal units since the cost of hydro production is insignificant. It should be mentioned that various constraints on the hydraulic and thermal power system network should be considered in the solution of the problem. The objective function to be minimized can be represented as follows [26]: where C(P) is the total fuel cost. NS is indicator used for the number of thermal plants. Moreover, is power generated by the ith thermal plant at time t. , , and are the cost coefficients of ith thermal plant. Considering multiple steams valves in conventional thermal power plants, it is essential to model the effect of valve-points on fuel cost. Valve-points effect can be modeled by a sinusoidal term, which will be added to the quadratic cost function [27]. is minimum power generation of thermal unit i. Moreover, and are valve-point coefficients of cost function of thermal unit i.

The total power generated by hydro and thermal plants should be equal to the sum of total load demand and transmission line losses. where Nh is the number of hydro units. is the generation of hydro units in megawatts (MW). Moreover, and are load demand and total transmission loss in MW, respectively. can be calculated using the Kron’s loss formula known as B-matrix coefficients [28]. Equation (3) calculates power transmission loss utilizing Kron’s loss formula, which is defined as B-matrix coefficients method in this paper as follows:
The coefficients are Kron’s loss formulation used to calculate power transmission of the hydrothermal system. The power loss of the system taking into account hydro plants and thermal units can be calculated by using such formulation. B-matrix coefficients for calculating the power loss are shown by Bij, Bio, and B00. In such formulation, Bmn is element of matrix B with dimension of . In addition, B0n is vector of the same length as P, and B00 is considered as a constant.
The hydro power generation, , is a function of water discharge and storage volume, which can be calculated as follows: where is the storage volume of reservoir in m3, and , , , , , and represent hydro power generation coefficients. Moreover, is the water discharge amount in m3.

The generator capacity constraints are expressed as: where and are the respective lower and upper bounds of power generation of thermal units. In addition, the minimum and maximum amounts of power production of hydro units are indicated by and , respectively.

The reservoir storage of hydro unit is related to previous inflow and spillage, and storage of reservoir discharge from upstream reservoirs, which can be formulated as: where is the inflow rate of the reservoir, is set of instant upstream hydro plants of the jth reservoir. Additionally, τ is time delay of immediate downstream plants.

GAMS is defined as a practical tool to handle general optimization problems, which consists of a proprietary language compiler and a variety of integrated high-performance solvers. GAMS is specifically designed for large and complex problems, which allows creating and maintaining models for a variety of applications. GAMS is able to formulate models in many different types of problem classes, such as linear programming (LP), nonlinear programming (NLP), mixed-integer linear programming (MILP), mixed-integer nonlinear programming (MINLP) and dynamic nonlinear programming (DNLP). Nonlinear models created in GAMS area should be solved by using an NLP algorithm. This paper offers a novel approach based on the NLP method to obtain optimal planning of hydrothermal systems. Accordingly, the STHTS is modeled as a NLP in this study, and is solved by implementing OptQuest/NLP (OQNLP) solver. The STHTS problem is formulated as a nonlinear problem, which can be solved by GAMS software [29] using OQNLP solver [30]. OQNLP is a multi-start heuristic technique, which calls an NLP solver from different starting points. All feasible solutions obtained by such solvers are kept, and the best solution is reported as the final optimal solution. Such a method is capable of finding global optimal solutions of smooth constrained NLPs. A scatter search implementation called OptQuest is employed by OQNLP to compute starting points [31]. OQNLP is able to obtain global optimal solutions of smooth NLPs and MINLPs. A simplified pseudo-code is provided in Figure 1 for introducing the application of OQNLP to find the optimal solution of the optimization problems, which is divided into two levels. The first level generates candidate starting points and selects the best starting point among all of the points. Then, in the second level, new points are generated and evaluated in order to obtain the best solution in terms of generation cost.

In this paper, the performance of the proposed solution is evaluated in several test systems. A Pentium IV PC with 2.8 GHz CPU and 4 GB RAM PC is used to solve the problem in GAMS. The scheduling horizon is chosen as 24 h of a day.

First test system consists of four hydro plants and an equivalent thermal plant. The hydraulic communication among hydro units of this system is demonstrated in Figure 2. Transmission losses are not considered in this test system. Cost coefficients of thermal plants are ai = 0.002, bi = 19.2, and ci = 5000. The lower and upper operation limits of this thermal plant are 500 and 2500 MW, respectively. Data of thermal unit and hydro plants are adopted from [25]. Two different cases including convex and non-convex cost function are studied for this test system.

The valve-point effects and transmission losses are considered in this case, which make the problem more complex. The optimal result obtained by OQNLP is reported in Table 7. The hourly discharge of four hydro plants and the power generation of the hydro units are prepared in this table. In addition, power generation of three thermal plants are reported in Table 7. The power transmission loss of the hydrothermal system by applying Equation (13) during 24-h scheduling time interval is also reported in this table. In this case, considering Table 7, total generation of four hydro units and three thermal plants meets total load demand and power transmission loss of the system.
Comparisons of simulation results for this case study are accomplished in Table 8. It can be observed that the obtained result using the proposed method outperform the results of QEA [25], ABC [43], DE [32], SPPSO [50], RQEA [25], DNLPSO [15], PSO [51], CSA [44], TLBO [33], SA-MOCDE [37], GSA [52], QOTLBO [33], MOCA-PSO [53], SHPSO-TAC [51], IDE [40], RCGA-AFSA [34], QABDEVT [16], ACDE [54]. Taking into account transmission losses and valve-point effects, the best reported solution is related to ACDE [54], which obtained total cost of $41,593.48. However, the proposed method provided the optimal solution with the total operational cost of $41,350.5574 which is better than other methods.

In this study, dynamic non-linear programming is introduced to obtain optimal scheduling of a hydrothermal system. The valve-point loading impact of conventional thermal units and system power transmission loss are considered in finding the optimal solution of the short-term hydro-thermal scheduling problem by studying two test systems. Optimal solutions are reported and analyzed, and are compared with those provided in recent papers. Results showed the capability of the proposed method to obtain better solutions in terms of total operational cost in comparison with other heuristic algorithms. Test system 1 includes four cascaded hydro units and one equivalent thermal plant, in which daily savings are $29,926.035 and $13,468.026 in comparison with previously reported solutions for both cases 1 and 2, respectively. In addition, for test system 2, which contains four cascaded hydro units and three thermal plants, daily savings are $172.682 and $242.9226 in comparison with reported solutions in previous studies for both cases 1 and 2, respectively. The optimal solutions show that the proposed method is an effective and high-performance technique to solve short-term hydro-thermal scheduling problem considering transmission losses and valve-point loading effects. The future research trends in the area of short-term hydro-thermal scheduling can be concentrated on consideration of limitations of AC network constraints. In addition, the unit commitment problem of hydrothermal systems, considering the start-up cost, minimum uptime, and minimum downtime of the generation units can be considered as another research topic in this area. Moreover, the unavailability of the generation units and consideration of renewable energy sources such as wind power are other exciting subjects to be investigated. Also, middle and long-term scheduling of hydro-thermal system, considering the installation and maintenance cost of hydro and thermal plants, may be introduced as interesting subject in the area of hydro-thermal systems.

All authors have contributed equally work. 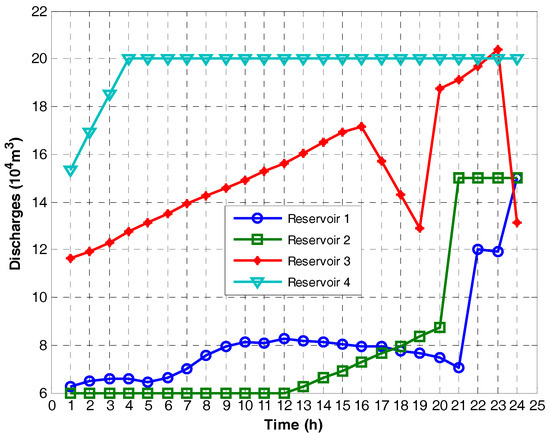 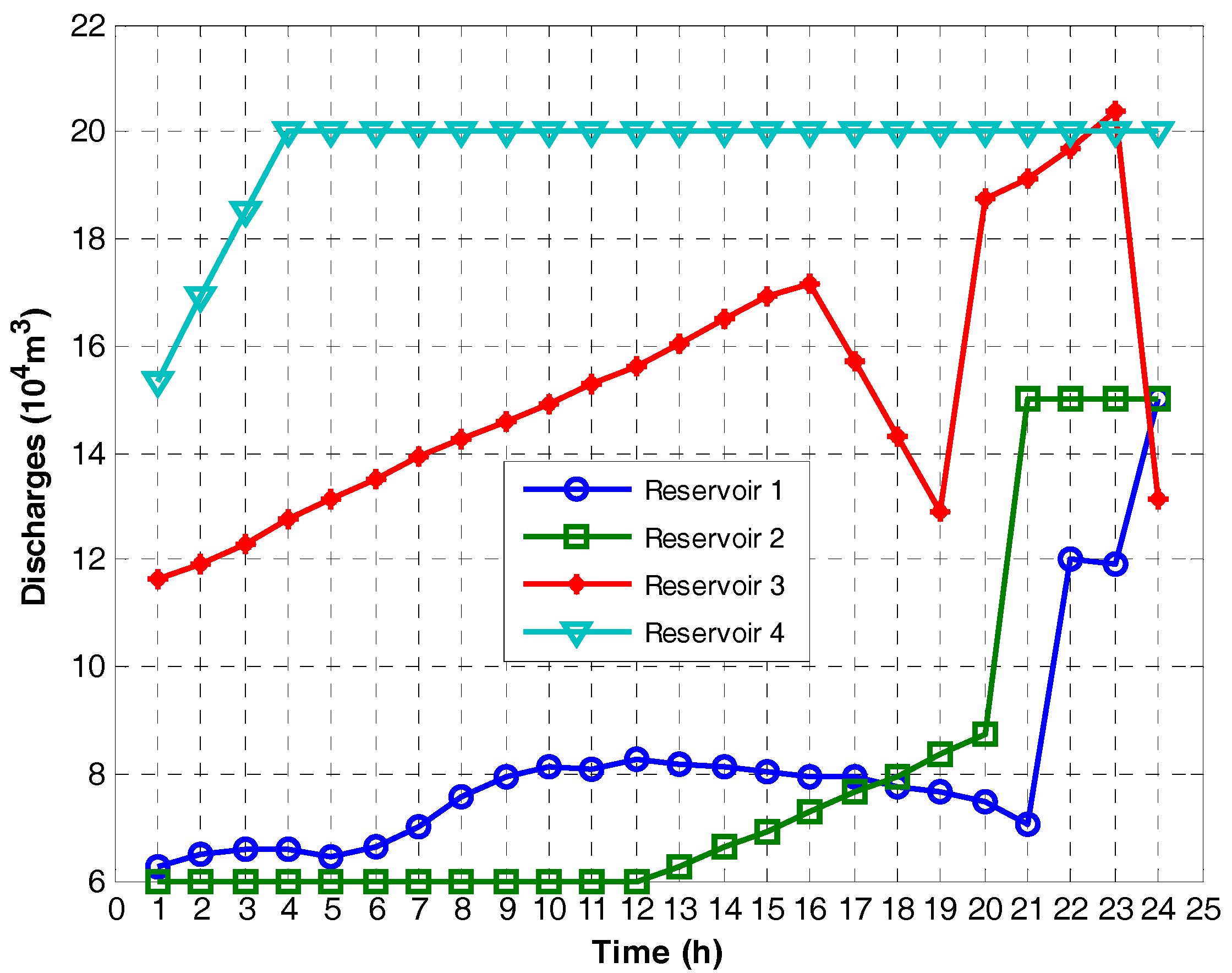 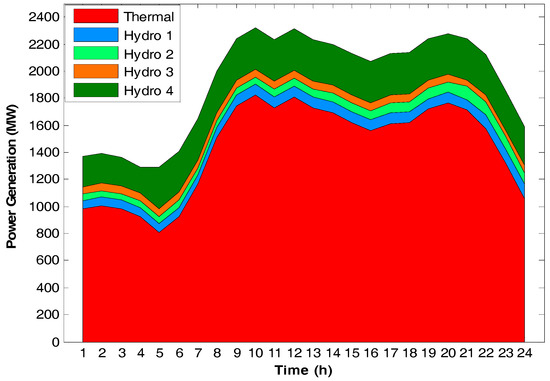 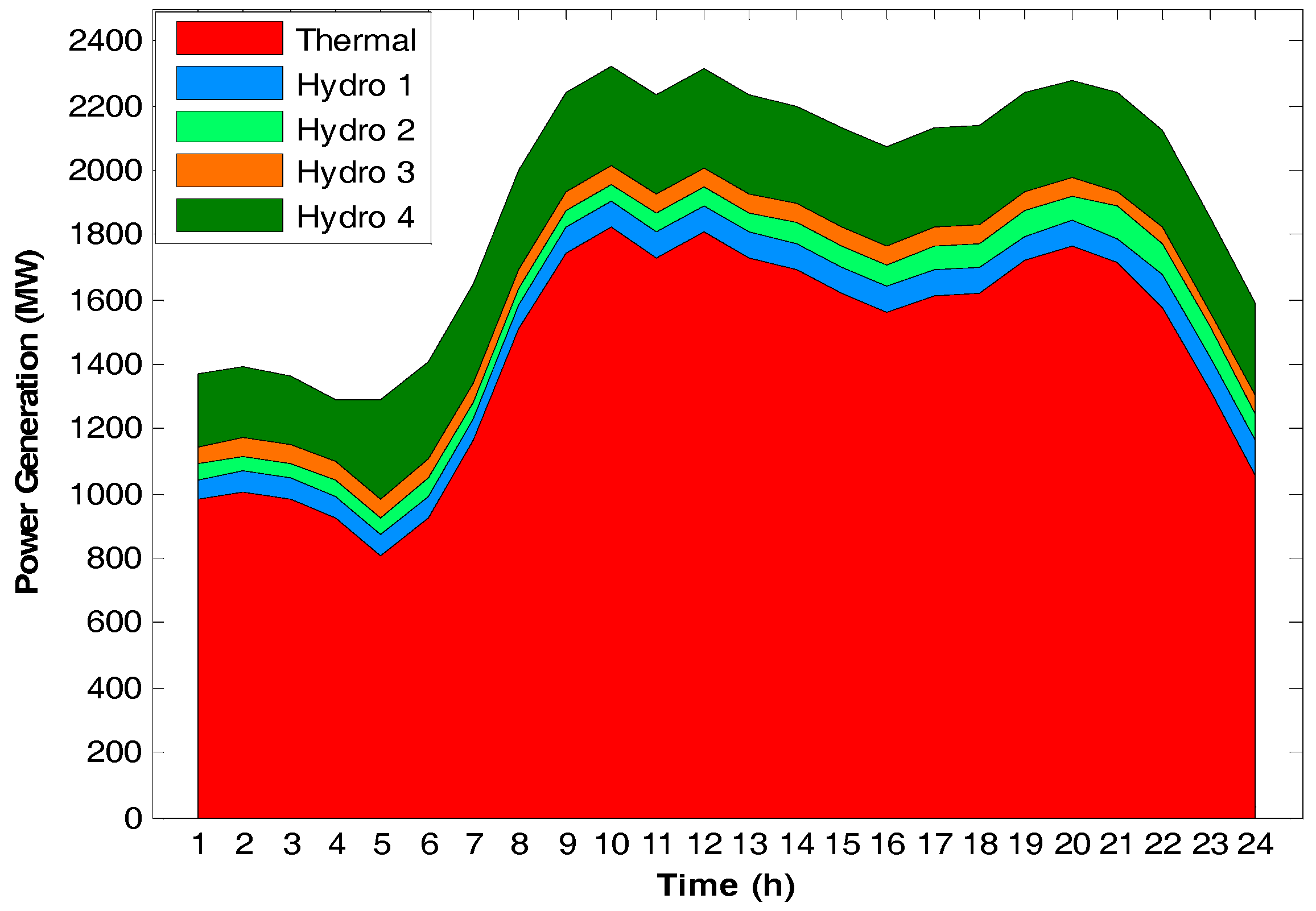