It is known that insulating paper is a porous material and oil-impregnated paper is a kind of composite, therefore the breakdown of oil-impregnated paper is very complicated and influenced by many factors. Hence a proper breakdown system is required. Figure 1 shows breakdown systems for oil-impregnated paper insulation under DC voltage but different temperatures, where 1 denotes wall bushing, 2 denotes thermometer, 3 denotes vessel, 4 denotes calorstat, 5 denotes sample, 6 denotes oil and 7 denotes electrodes. To avoid the influence of moisture, the sealed calorstat was filled with dry nitrogen.
The capacity of the AC source is 40 kVA and the highest output is 200 kV. Through a half-wave rectifier, DC voltage is generated from the AC source. The AC voltage was increased quickly from zero, and so was the DC voltage. The DC voltage ramp speed was 1.87 kV/s. A parallel resistive divider (10,000:1) was connected to the sample, and an oscilloscope was joined to the low voltage side of it to record the waveform of the applied voltage. The breakdown voltage can be obtained from the waveform just before breakdown.
The electrodes were made up of two identical stainless-steel cylinders, which were 25 mm in diameter and 25 mm high. They met the demand of standard IEC 60243-1: 1998.
Kraft paper samples were 170 μm in thickness and 100 mm in diameter. Karamay HV transformer oil was used. Its viscosity is of 9.6 × 10−6 m2/s, which ranks tenth and its acid value is 0.012 mg KOH/g. The amount of oil dissolved as alkane gases was 1.24 μL/L. Both paper and oil were strictly processed before the breakdown experiments. Details regarding how samples were processed could be found in [15]. At least 15 samples were used for the breakdown voltage measurement at each temperature.

TG of insulating paper was analyzed by a DSC Q2000 Thermal Gravimetric Analyzer (TA Instruments, New Castle, DE, USA). Precision balance was achieved with a sample pan located inside a furnace with a programmable control temperature. The TG analyzer continuously measured mass while the temperature of the sample changed over time. The rate of temperature increase was 5 °C per minute. The data from a thermal reaction was compiled into a plot of percentage of initial mass versus temperature.
The conductivity was measured with a Keithley 6517A electrometer (Keithley Instruments, Inc., Cleveland, OH, USA) through a cell containing three electrodes. The capability of Keithley 6517A is from 10 aA to 21 mA. Its sensitivity and accuracy meet the requirement for low current measurement as well, and the deviation is always less than ±1%. The current density to be measured was so small that low noise cables were used. Furthermore, strict shielding and guarding techniques were also adopted.

It was easy to obtain a combined simulation model by combining the thermal breakdown and bipolar charge transport models. Though constant mobility is often used in space charge transport, it cannot reflect the influence of temperature and electric fields. Thus, we consider temperature- and electric field-dependent mobility, as follows [18,21]: where ν0 is phonon frequency, and it is 4.2 × 1014 Hz here. To accurately determine mobility, we measured the temperature-dependent conductivity of oil-impregnated paper with a 1-kV/mm electric field applied, as shown in Table 3. The temperature-dependent conductivity of oil-impregnated paper under low electric fields can be expressed as: where σ0 is a constant.
References [23,24] have pointed out that the activation energy of oil-impregnated paper is 0.8~0.9 eV. By data fitting, we obtained that ua = 0.84 eV, which was consistent with the literature. The calculated breakdown voltages are illustrated in Figure 7 (denoted by the temperature criterion). It could be seen that the calculated results were larger than the experimental results except that at 90 °C. This was because carrier injections from electrodes and carrier mobility were slow under lower temperatures. As a result, the current density was small, and consequently the heat generation was slow. Therefore, the calculated breakdown voltages were higher.
The breakdown process of oil-impregnated paper was very complex, involving thermal, electrical and mechanical factors [18,25]. According to Figure 2 and Figure 4, breakdown voltages at −20 °C and 0 °C were hardly influenced by temperature. It could be seen as electrical breakdown and the breakdown field Eb was about 230 kV/mm. Eb could be treated as an intrinsic feature of oil-impregnated paper; namely, once a local electric field within the sample reached Eb, breakdown happened. With the combination of the temperature criterion and electric field criterion, we obtained a combined electro-thermal criterion. The simulated breakdown voltages are presented in Figure 7 (denoted by electro-thermal criterion). The calculated breakdown voltages were very close to experimental results except the one at 60 °C.
Details of the simulation revealed that the temperature criterion took effect at 60 °C and 90 °C, while the electric field criterion took effect at 0 °C and 30 °C. This was because of the influence of temperature on the carrier injection and carrier mobility. According to Schottky’s injection law and Equation (7), under low temperatures, not only was the carrier injection rate slow, but also carrier mobility was slow, which made it easy to capture by traps [22,26]. The internal electric field was consequently distorted and reached the critical value. Under high temperatures, the carrier injection rate and mobility were both fast, so there were much more free carriers within the sample [22,26]. Then, the current density became large, and so was the heat generation. As a result, the temperature rose rapidly and reached the critical value. However, if the ambient temperature was 60 °C, then the carrier injection and mobility were neither high nor low, as were the electric field distortion and temperature increment. Therefore, the electric field distortion was slower than those at 0 °C and 30 °C, and the temperature increment was slower than that at 90 °C, as shown in Figure 10. A higher external voltage was needed so that the local electric field and temperature could reach the critical values. This is why the simulated result was higher than that of experimental result at 60 °C.
Negative differential mobility is a common phenomenon in semiconductors, such as the Gunn Effect. As regards dielectrics, Lewis predicted this phenomenon in hole transport modeling in polyethylene [27]; George observed it in the research of space charge packets in polyethylene, but neither researcher could explain it [28]. This phenomenon in oil-impregnated paper has not been reported so far; therefore, we suppose that it exists in oil-impregnated paper, but further research is required. For simplicity, it could be assumed to be controlled by activation energy, ua, if the electric field was higher than a critical value Eμ, ua = 1.1 eV; otherwise, ua = 0.84 eV. With this assumption and Eμ = 200 kV/mm, the simulated electro-thermal breakdown voltages are illustrated in Figure 8. These decreased with the increase of temperature and they were close to the experimental results.
Once temperature is over 113 °C, the secondary structure of cellulose changes, which leads to a rapid increment of conductivity [29]. So, it was no surprise that the breakdown voltage at 120 °C decreased much more.

This study is supported by National Key R&D Program of China (2017YFB0902704), the Fundamental Research Funds for the Central Universities 2017MS009, State Key Laboratory of Power Grid Environmental Protection, and State Key Laboratory of Advanced Power Transmission Technology (GEIRI-SKL-2017-009). We are grateful for their support. 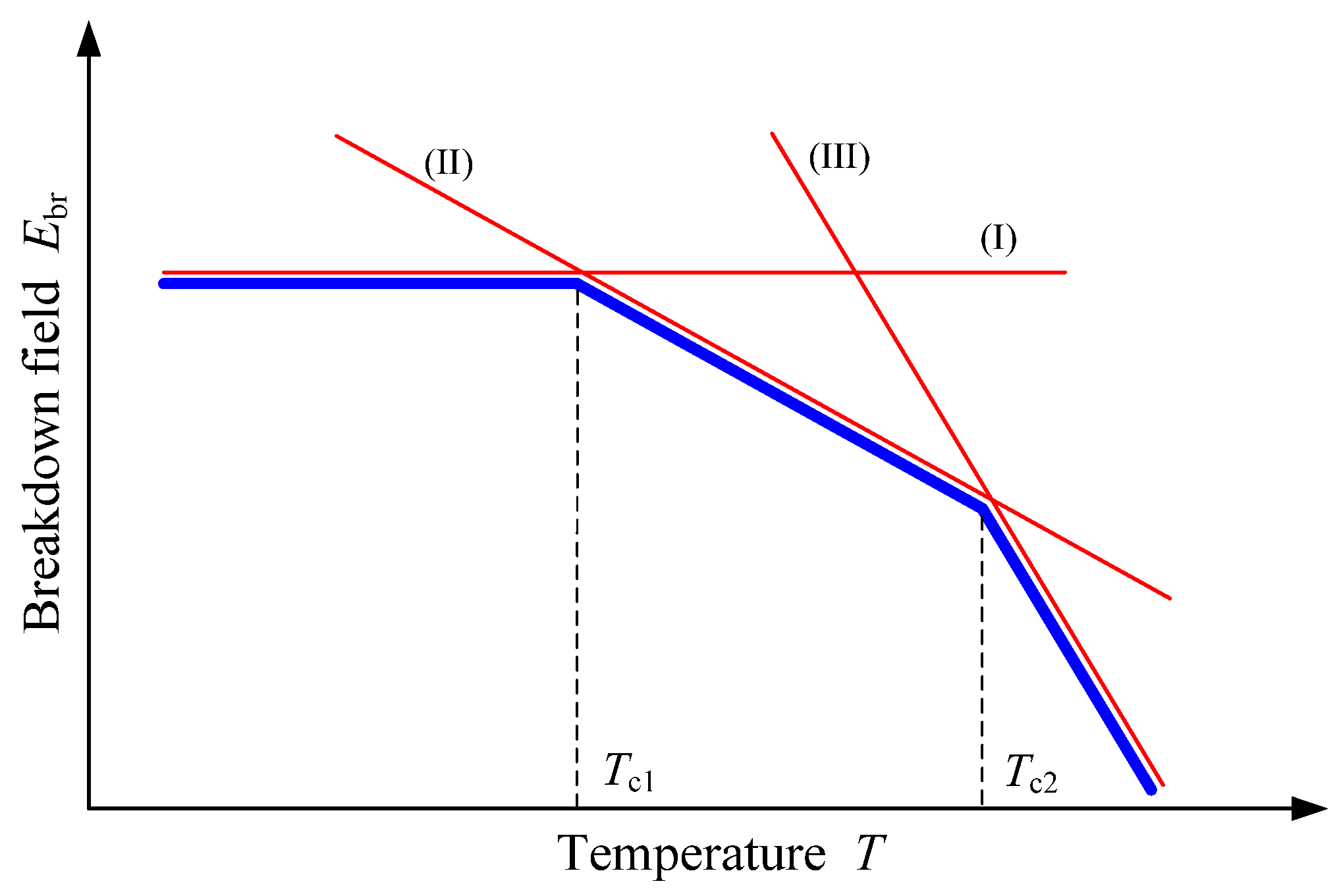 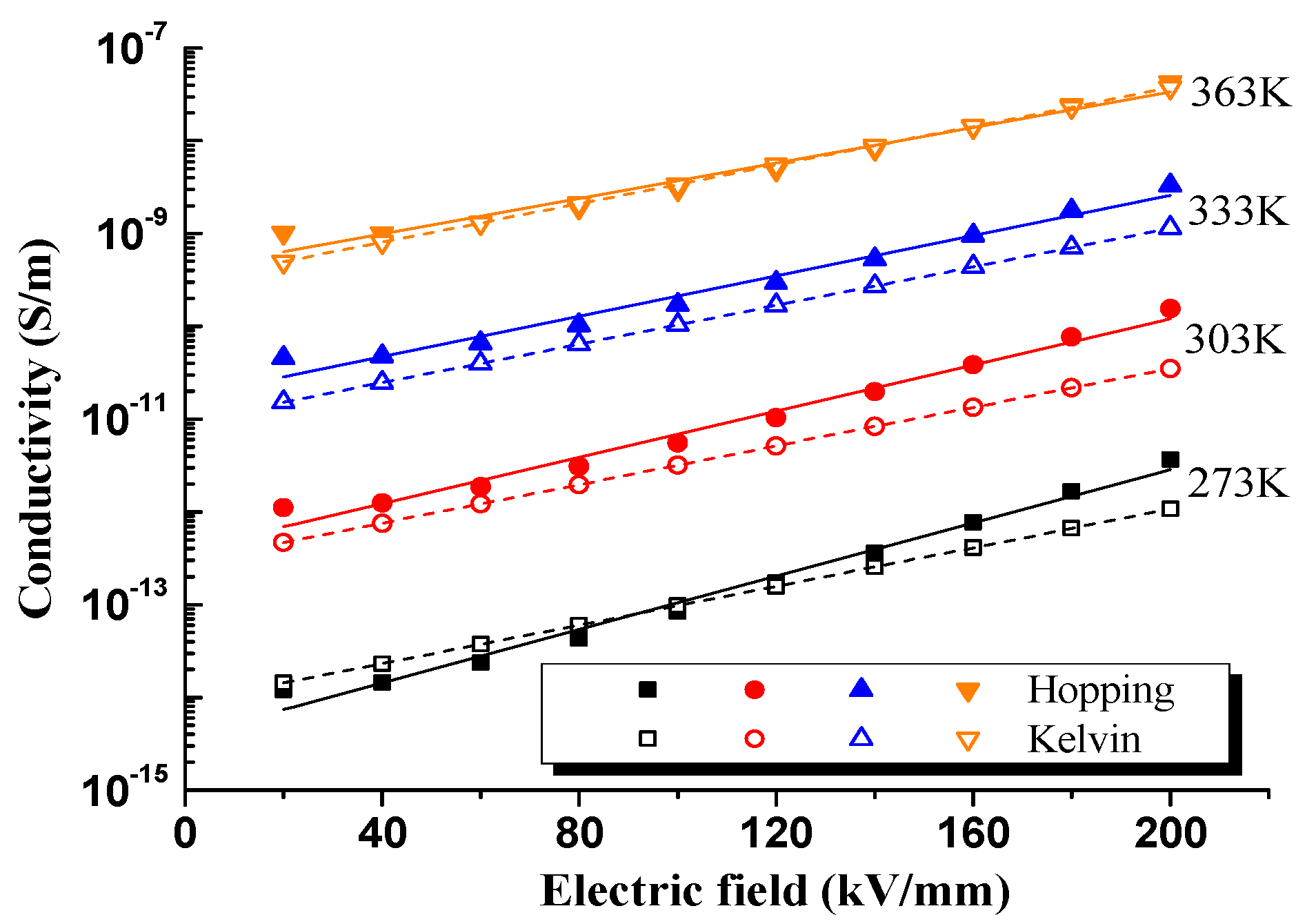