The scenarios generated by energy systems models provide a picture of the range of possible pathways to a low-carbon future. However, in order to be truly useful, these scenarios should not only be possible but also plausible. In this paper, we have used lessons from historical energy transitions to create a set of diagnostic tests to assess the feasibility of an example 2 °C scenario (generated using the least cost optimization model, TIAM-Grantham). The key assessment criteria included the rate of deployment of low carbon technologies and the rate of transition between primary energy resources. The rates of deployment of key low-carbon technologies were found to exceed the maximum historically observed rate of deployment of 20% per annum. When constraints were added to limit the scenario to within historically observed rates of change, the model no longer solved for 2 °C. Under these constraints, the lowest median 2100 temperature change for which a solution was found was about 2.1 °C and at more than double the cumulative cost of the unconstrained scenario. The analysis in this paper highlights the considerable challenge of meeting 2 °C, requiring rates of energy supply technology deployment and rates of declines in fossil fuels which are unprecedented. View Full-Text
Keywords: energy transition; energy systems modelling; low-carbon; decarbonisation energy transition; energy systems modelling; low-carbon; decarbonisation
►▼ Show Figures 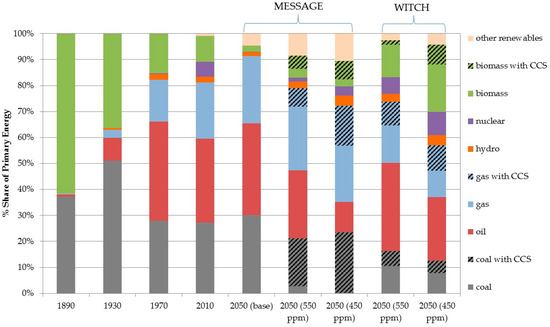