The Impact of Working Capital Management on Firm Profitability: Empirical Evidence from the Polish Listed Firms
Next Article in Special Issue

Application of the 4Es in Online Crowdfunding Platforms: A Comparative Perspective of Germany and China
Previous Article in Journal

A Gap in Brain Gain for Emerging Countries: Evidence of International Immigration on Non-Resident Patents
Previous Article in Special Issue

Predictions of Crowdfunding Campaign Success: The Influence of First Impressions on Accuracy and Positivity

Civic Crowdfunding in Local Governments: Variables for Success in the Netherlands?

To manage pressing societal challenges, local governments increasingly tap into the knowledge of citizens. Citizens do not have a voice that can be heard only during elections, but they also have knowledge and capacities that can be used to generate input more often (Roberts 2004; Siebers and Torfing 2018; Mueller et al. 2018). As a result, local governments offer various platforms to engage citizens, for example meetings, dialogue sessions, or citizen panels (Rowe and Frewer 2000).
More specifically it is visible that by the increase in technology, the platforms through which local governments interact with their citizens have changed (Quaintance 2017; Cho et al. 2020; Johnson et al. 2020). Via internet, email or WhatsApp citizens can more easily than before address concerns about municipal matters, or initiatives that they aim to start (Johnson et al. 2020). As a result, relatively simple tasks such as applying for a new passport or even complex interactions such as filing tax returns have become easier. Office opening hours are no longer a decisive factor for when or how citizens interact with the municipality, but citizens themselves determine their moment of interaction. At the same time, the increased use of technology allows for (government) information to be more accessible. This leads to experiments of municipalities with more IT-enabled forms of citizen engagement (Gandhinagar 2015; Hsu et al. 2020). An example of such form is civic crowdfunding.
Civic crowdfunding is a recent technological development. It can be defined as “a sub-type of crowdfunding through which citizens fund projects that provide community service” (Davies 2014, 2015; Stiver et al. 2014, p. 1; Hummel 2016). Often, governments take a role in these crowdfunding projects. They can have a role in a campaign themselves, for example by facilitating the platform, developing communication strategies for projects, or acting as co-financier. Although the role of the local government is not necessary, various authors assume a role for local authorities within these initiatives (e.g., Charbit and Desmoulins 2017). Even if municipalities do not have a role in the organization of a campaign, they often have to be involved because of the investments that are made often relate to the public space (e.g., parks and playgrounds).
Civic crowdfunding is seen as a platform that can change the interaction between governments and citizens as it offers communities an alternative means of financing social projects that are normally funded by the government. Advocates suggest that civic crowdfunding strengthens the empowerment of citizens in neighborhoods by enabling them to initiate worthwhile projects within that neighborhood (Brent and Lorah 2019). The growth of civic crowdfunding, therefore, provides opportunities for local governments to facilitate, stimulate, and finance initiatives from citizens. Consequently, it is seen as a new form of citizen engagement in which citizens participate in planning and designing projects (Mueller et al. 2018). Slightly more knowledge of the process of civic crowdfunding campaigns is now available (Brent and Lorah 2019; Cho et al. 2020; Kusumarani and Zo 2019). Despite this, there is still little empirical evidence about factors that contribute to the establishment of civic crowdfunding campaigns (Stiver et al. 2014; Morell et al. 2020) particularly when it comes to acquiring money for such campaigns. It is suggested that civic crowdfunding depends to a great extent on money and attracting funders.
Based on such factors, this paper explores campaign characteristics and local demographic characteristics that support the financing of civic crowdfunding campaigns by examining 269 projects in Dutch municipalities. Therefore, we do not focus on the process and execution of civic crowdfunding projects but aim to shed light on the factors that influence whether enough money was brought in to execute the project properly. The use of match-funding, the target amount of money, and the theme of the project to get attention are among other project issues. In addition, local demographic characteristics of the neighborhood of the projects are included in our analyses. Our empirical results enable us to further specify the role of local governments in this new instrument. By doing this, among other things, we further extend the work of Praharaj et al. (2017), Brent and Lorah (2019), and Cho et al. (2020), which focus mainly on demographic characteristics of the project neighborhoods. We also elaborate on the results of Charbit and Desmoulins (2017), Doan and Toledano (2017), Colasanti et al. (2018), and Kusumarani and Zo (2019), who studied the influence of some campaign characteristics on the success of the funding. Moreover, the empirical analyses are based on data in the European Union, a region where governments tend to be more active in community development then in the US.
This article begins by describing the growing interest in civic crowdfunding and its advantages. This is followed by discussing previous research on civic crowdfunding. After that, an empirical analysis of civic crowdfunding campaigns is made by examining characteristics that contribute to the successful funding of such campaigns. The paper concludes with discussing the main findings and implications for local governments.

2. The Attention for Civic Crowdfunding

Civic crowdfunding is a recent development in which individuals raise money using technology (Bastian 2015; Kusumarani and Zo 2019). A crowdfunding platform offers technical facilities for people who want to initiate a certain project (for example, a playground in their neighborhood). In doing so, civic crowdfunding1 refers to financing projects that are dedicated to a ‘civic’ cause that are initiatives originating in the community and supported by individuals or organizations in society (Wenzlaff 2020a, p. 441). The term ‘civic’ in this case refers to actions within municipalities as well as actions by citizens who pursue a common goal (Wenzlaff 2020b). Civic crowdfunding facilitates making the project visible, transparent, and easy for users to launch and promote a project. Often, the appearance on a platform is combined with an online campaign, using among other things social media, and offline elements such as flyers, events, and newsletters. It is considered important that a target amount of money needs to be raised and there is an end date; however, there is no insight as to whether this has an impact on the success of a campaign.
Since the start of civic crowdfunding in the United States about 15 years ago, there has been a huge increase in these platforms (Massolution 2015). Next to civic crowdfunding, in which individuals donate money to social projects, other forms of crowdfunding exist. Three forms are distinguished. First is loan-based crowdfunding. This is the mostly popular form and measures crowdfunding in invested capital. In this form the individual investors lend money to an organization via a digital platform in return for interest. A second form is equity-based crowdfunding. This form is similar to loan-based crowdfunding; however, investors receive equity in return. The third form is reward-based crowdfunding. In this form, individuals invest in a certain service or product and—when the product is available—they receive this product. For example, individuals invest in an idea for a movie and when enough money is raised all the investors can go to the cinema to see the result. In practice, combinations of these forms of crowdfunding also exist (Massolution 2015; Miglo 2020). Thus, crowdfunding provides the possibility to implement new ideas or projects and offers a process by which money can be raised online from an individual or a group of individuals in various ways (Ahlers et al. 2015; Miglo 2020). Crowdfunding is therefore used in addition to traditional resources such as investments, venture capital and banking (Miglo 2020; Ullah and Zhou 2020, p. 1).
In the Netherlands too, the interest in crowdfunding has grown. In 2019 alone 424 million Euros were raised via crowdfunding in general, with on average about 32 thousand Euros per project (Crowdfundingcijfers[crowdfunding statistics] 2020). In 2017, 170 million Euros was raised. This amount was triple that raised in 2014 (Douw and Koren 2017). For civic crowdfunding, a similar increase is visible. Civic crowdfunding raised 16.2 million Euros with 8205 projects in 2019. The average amount for civic crowdfunding projects is 2000 Euros, which indicates that there is a serious divide between crowdfunding with a commercial purpose and crowdfunding in which the social objectives are the focus.
Unlike crowdfunding in which the objective is to collect money, by using online social networks focused on commercial objectives (Mollick 2014; Ahlers et al. 2015), the result of civic crowdfunding is the public good, public interest (Davies 2014, 2015; Cheung and Rogers 2020), such as a park or an educational program for the community. Civic crowdfunding comes with several advantages. It fosters the engagement of citizens in a variety of ways. Citizens can participate on a small scale (Kusumarani and Zo 2019) by donating a small amount of money. Furthermore, civic crowdfunding increases the possibility of involvement by offering help to a certain project and rewards the collective by setting up project that foster the community (Gaventa 2002; Fischer 2000; Irvin and Stansbury 2004; Nabatchi and Leighninger 2015). Additionally, civic crowdfunding allows citizens to have a more active role in public decision-making and leads to developing initiatives in their own community. Moreover, it reduces challenges related to the process of citizen engagement. For example, it helps in the selection of certain projects as citizens can decide themselves which projects deserve priority (Charbit and Desmoulins 2017).

We begin by presenting basic information on our dependent variable, i.e., the success ratio which is defined as the ratio of the realized earnings and the target earnings. Figure 1 shows the success ratios of the 269 projects in our data sources. A project is successful when the success ratio is above 80%. The figure shows that about 22% of the civic crowdfunding projects did not met this requirement and failed. About 78% of the campaigns did meet the 80% requirement and can be defined as successful.
In addition, we examined the average success ratios per project theme. Figure 2 shows that the themes Animals (success ratio 114.6%; 17 projects) and Public Meetings (success ratio 109.1%; 38 projects) are the most popular and receive the most funding. These themes are therefore most successful. The theme Food is less successful (success ratio 75.0%; 4 projects). Due to the small number of Food projects, it cannot be concluded that Food funding campaigns are less popular than the other projects and are therefore less successful.
To examine the influence of the civic crowdfunding theme, we can use ten different dummy variables each indicating a theme in the mixed regression model. However, to reduce the number of independent variables in our mixed regression models we replaced the ten different dummy variables by only one dummy variable that indicates whether the theme of the project is popular or less popular. The new dummy variable will have a value of 1 for the five project themes with the greatest average success ratios. These themes are Animals, Public Meetings, Green & Nature, Sports & Games, and Care & Welfare (174 projects; average success ratio 100.6%). The dummy variable will have a value of 0 for the other five project themes. In this case, Social Entrepreneurship, Education & Youth, Art & Culture, Sustainability, and Foods (95 projects; average success ratio 83.8%).
We use the following campaign characteristics as independent variables in the first mixed regression model: (1) the dummy variable indicating whether the theme of the project is popular or less popular; (2) target amount of money (expressed in terms of thousand Euros); (3) all-or-nothing principle (yes = 1; no = 0); and (4) match-funding (yes = 1; no = 0).

6.1. The Influence of Campaign Characteristics

6.2. The Influence of Local Demographic Characteristics

The data are available upon request. 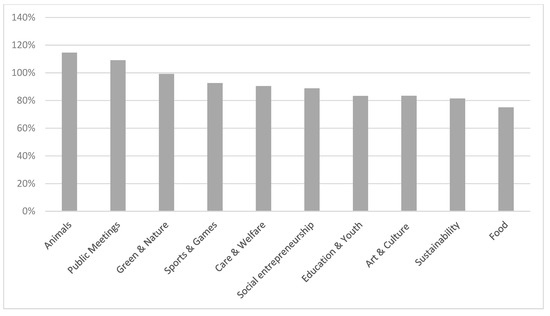