Life after Debt: The Effects of Overleveraging on Conventional and Islamic Banks
Previous Article in Special Issue

What Role Does the Housing Market Play for the Macroeconomic Transmission Mechanism?

Technology Acceptance in e-Governance: A Case of a Finance Organization

Presently, one of the most critical challenges for e-government and e-banking is the accurate and correct realization of factors that have a significant impact on customer behavior. Without appropriate knowledge of these factors, it would be impossible to predict the level of welcoming toward new services, acquire a competitive advantage, and coordinate marketing programs with the needs of customers. On the other hand, in today’s competitive world, banks are obliged to implement new services to retain current customers and attract new ones. This research has been conducted with the goal of identifying influential factors that have an impact on the development of user intentions. The theoretical research model has been designed based on the technology acceptance model (TAM), as well as technology adoption theory, technology dissemination theory, and planned behavior theory. This study adopted an empirical approach to investigate key acceptance factors in a case organization. The statistical population of this research consists of customers and employees in different branches of a financial institution called Mehr bank in Iran. The data was collected by means of questionnaires that were completed by 200 customers and employees who work at Mehr bank or have business relationships with it. Data analysis in descriptive and inferential statistics domains had been done in SPSS and AMOS software, respectively. This paper presents first-hand data analysis of a case study on technology adoption in banking systems in Iran. In addition, structural equations have been used for inferential analysis. The findings of this study confirm the direct impact of “perceived usefulness” and “perceived ease of use” towards user attitudes. In addition, results show that “attitude” and “perceived usefulness” have a direct impact on the development of usage intention in customers. However, the results do not confirm the role of subjective norms on the development of user intent. This study is limited to a selected organization, and the proposed model should be examined by applying it in different contexts. View Full-Text
Keywords: Internet banking; e-government; finance; and banking technology; technology adoption; theory of planned behavior; customer attitude Internet banking; e-government; finance; and banking technology; technology adoption; theory of planned behavior; customer attitude
►▼ Show Figures 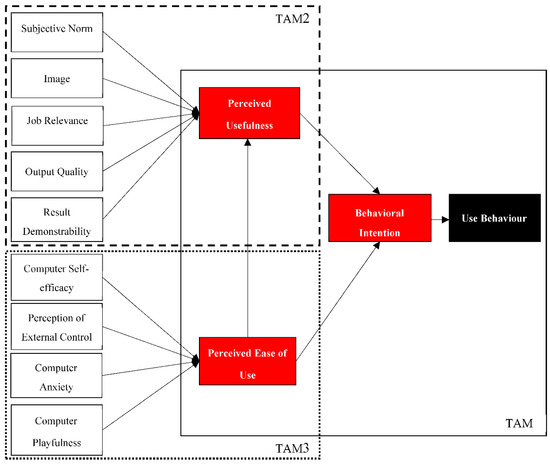