Marketability Discount in Various Economic Environments. Comparison of Developed and Emerging Markets on the Example of the USA and Poland
Previous Article in Journal

Regulatory Restrictions on US Bank Funding Sources: A Review of the Treatment of Brokered Deposits
Previous Article in Special Issue

Reply to “Remarks on Bank Competition and Convergence Dynamics”

In this paper, we suggest improved estimation strategies based on preliminarily test and shrinkage principles in a seemingly unrelated regression model when explanatory variables are affected by multicollinearity. To that end, we split the vector regression coefficient of each equation into two parts: one includes the coefficient vector for the main effects, and the other is a vector for nuisance effects, which could be close to zero. Therefore, two competing models per equation of the system regression model are obtained: one includes all the regression of coefficients (full model); the other (sub model) includes only the coefficients of the main effects based on the auxiliary information. The preliminarily test estimation improves the estimation procedure if there is evidence that the vector of nuisance parameters does not provide a useful contribution to the model. The shrinkage estimation method shrinks the full model estimator in the direction of the sub-model estimator. We conduct a Monte Carlo simulation study in order to examine the relative performance of the suggested estimation strategies. More importantly, we apply our methodology based on the preliminarily test and the shrinkage estimations to analyse economic data by investigating the relationship between foreign direct investment and several economic variables in the “Fragile Five” countries between 1983 and 2018. View Full-Text
Keywords: shrinkage estimator; seemingly unrelated regression model; multicollinearity; ridge regression shrinkage estimator; seemingly unrelated regression model; multicollinearity; ridge regression
►▼ Show Figures 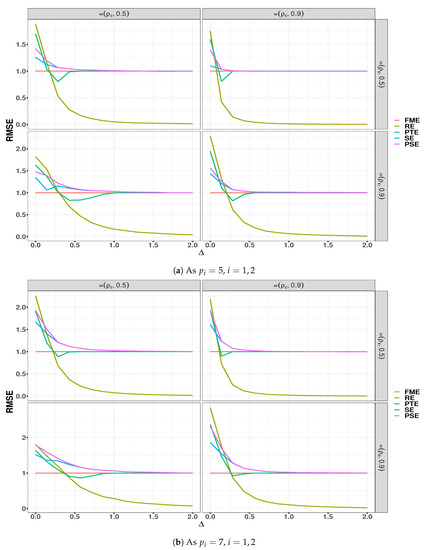