Management of Pyrexia Associated with the Combination of Dabrafenib and Trametinib: Canadian Consensus Statements
Previous Article in Journal

Despite improvements in surgical and medical treatments, pancreatic ductal adenocarcinoma (PDAC) still represents one of the deadliest malignancies. With a five-year overall survival (OS) still under 10% and an increasing incidence over the last decade, PDAC is projected to be the second leading cause of cancer-related death by 2030 [1].
Late diagnosis and rapid progression of the disease together with resistance to chemotherapy and radiotherapy contribute to PDAC dismal prognosis. Moreover, PDAC is characterized by a dense fibrotic stroma, which represents a physical barrier for therapies and also has an established role in promoting cancer progression. Gemcitabine has been the mainstay of treatment of both resected and metastatic PDAC for many years while more recently, the combination regimens of either 5-fluorouracil (5-FU)/leucovorin with irinotecan and oxaliplatin (scheme FOLFIRINOX), or gemcitabine and nanoparticle albumin-bound paclitaxel (nab-paclitaxel) have become the standard of care in different settings on the basis of phase III clinical trials showing superior outcomes with either of the combinations over gemcitabine alone [2,3,4]. This scenario highlights the need for identification of biomarkers associated with disease prognosis with utility to select patients for different treatments.
Caveolin-1 (Cav-1) is the principal structural component of caveolae (flask-shaped invaginations of plasma membrane) and plays a key role in cellular endocytosis, lipid homeostasis, and signal transduction, serving both to compartmentalize and regulate cellular signaling [5]. Caveolae and caveolins had a crucial role in various human pathobiological conditions, in particular cardiovascular and neoplastic disease, as reported by Zhang et al. in Caveolin-deficient mouse models [6]. Cav-1 is upregulated in different cancers, including PDAC, lung cancer, and breast cancer, and several studies have demonstrated an association between Cav-1 expression and invasion, distant metastasis, and poor prognosis [7,8,9].
Furthermore, Cav-1 expression has been correlated with resistance to radiotherapy and chemotherapy in PDAC cells [10,11]. In particular, tumor Cav-1 knock-down significantly reduced beta1 integrin expression and Akt phosphorylation, induced Caspase 3- and Caspase 8-dependent apoptosis, and enhanced the radiosensitivity of 3D human pancreatic cell cultures [12].
Interestingly, recent studies have shown that Cav-1 may play a dual role in PDAC biology depending on the site of expression of the protein, tumor type, and stage of the disease. In particular, while its expression in cancer cells has been associated with an aggressive phenotype and poor prognosis, the loss of Cav-1 in the tumor stroma has been associated with chemoresistance and increased tumor growth [13].
Pre-clinical studies have shown that Cav-1 is critical for the uptake of albumin as well as nab-paclitaxel in PDAC cells, causing a subsequent apoptotic response in tumor cells in vitro. Moreover, Cav-1 expression correlates positively with sensitivity to this drug, representing a promising predictive biomarker for nab-paclitaxel [14].
In this study, we investigated the prognostic impact of Cav-1 expression in a cohort of locally advanced or metastatic PDAC patients treated with different first-line chemotherapy regimens, including gemcitabine plus nab-paclitaxel, FOLFIRINOX scheme, and gemcitabine monotherapy. We also assessed the predictive value of Cav-1 in patients treated with gemcitabine and nab-paclitaxel.

A total of thirty-nine locally advanced or metastatic PDAC patients treated with first-line chemotherapy at the Oncology Departments of AOU Ospedali Riuniti “Umberto I–G.M. Lancisi–G. Salesi” (Ancona, Italy) and Ospedale “Augusto Murri” (Fermo, Italy) between April 2013 and January 2021 were included in this analysis. For each patient enrolled, we collected data concerning age, gender, ECOG PS (Performance Status) at the beginning of treatment, grading, TNM stage (8th edition), site of metastasis, and response to treatment (assessed by RECIST 1.1).
Data were retrospectively collected from medical chart reviews and electronic records. Patients consented to treatment and procedures. The study was conducted according to the guidelines of the Declaration of Helsinki and approved by the Institutional Ethics Committee of Azienda Ospedaliero Universitaria Ospedali Riuniti Umberto I-G.M. Lancisi-G. Salesi di Ancona (protocol code 214341).

Immunostainings were performed on conventional 5-μm-thick paraffin tissue sections on positively charged slides. After heat drying, to dewax and better unmask antigenic sites, an antigen retrieval solution was applied, incubating sections for 20 min in a Dako PT-Link autostainer (DakoCytomation, Glostrup, Denmark) with a Dako Target Retrieval solution (DakoCytomation), pH 9.0, at 750 KW for 20 min before antibody staining. Endogenous peroxidase activity was quenched, incubating the sections in 3% (v/v) hydrogen peroxide for 7 min at room temperature. Tissue sections were then incubated in a Dako Autostainer Link 48 with the Caveolin-1 rabbit polyclonal antibody (cat. N. 16447-1-AP, dil. 1:200, Proteintech, Rosemont, IL, USA). The antigen–antibody complex was subsequently visualized using the Envision⁄HRP Detection System kit peroxidase⁄DAB (DakoCytomation). Sections were counterstained with Mayer’s Hematoxylin (Bio-Optica SPA, Milano, Italy) and coverslipped with Paramount. Negative control slides omitting the primary antibody were included in the assay. We used tissue sections from a human lung cancer tissue as positive control. Capillary endothelial cells were used as internal positive controls in all tissue specimens examined. All evaluations were independently performed by two investigators who were blinded to the patient group. Immunostained cells for Cav-1 were enumerated in 10 representative and consecutive microscopic high-power fields (40X-HPF). Images were captured with a digital camera connected to a light mycroscope and a computer. We evaluated positivity immunoreactivity of Cav-1 in neoplastic and stromal cells. Fine needle aspiration biopsies (FNAB) samples were considered adequate for Cav-1 immunohistochemical analysis if contained a minimum of 100 viable tumor cells. Positivity immunostaining of Cav-1 is defined if the cells showed granular staining at the cell membrane and in the cytoplasm. The percentage of positive neoplastic cells was assessed, and the intensity of the immunostaining was scored as negative (0) (Figure 1a), weakly (1+), moderately (2+) (Figure 1b), or strongly (3+) (Figure 1c). Inconsistencies were discussed until an agreement was reached.

Our study evidenced a negative prognostic role of Cav-1 in patients with metastatic/locally advanced unresectable PDAC, according to the literature. Moreover Cav-1 seems not to have any predictive value concerning response rates to different types of first line treatment. Therefore, further prospective research focused on the use of Cav-1 specific inhibitors should be conducted in order to increase the available therapeutic strategies and improve survival for advanced PDAC patients.

The study was conducted according to the guidelines of the Declaration of Helsinki, and approved by the Institutional Ethics Committee of Azienda Ospedaliero Universitaria Ospedali Riuniti Umberto I-G.M. Lancisi-G. Salesi di Ancona (protocol code 214341 approved on 23 July 2014).

Informed consent was waived due to the retrospective nature of the study.

The authors would like to thank Alessandra Filosa working at Pathology Department. of Ospedale “A. Murri” in Fermo who prepared tissue samples of patients treated in Fermo Hospital.

Rossana Berardi has served as a consultant/advisory board member for AstraZeneca, Boehringer Ingelheim, Novartis, MSD, Otsuka Pharmaceutical, Eli Lilly, and Roche. The other authors declare no conflict of interest. 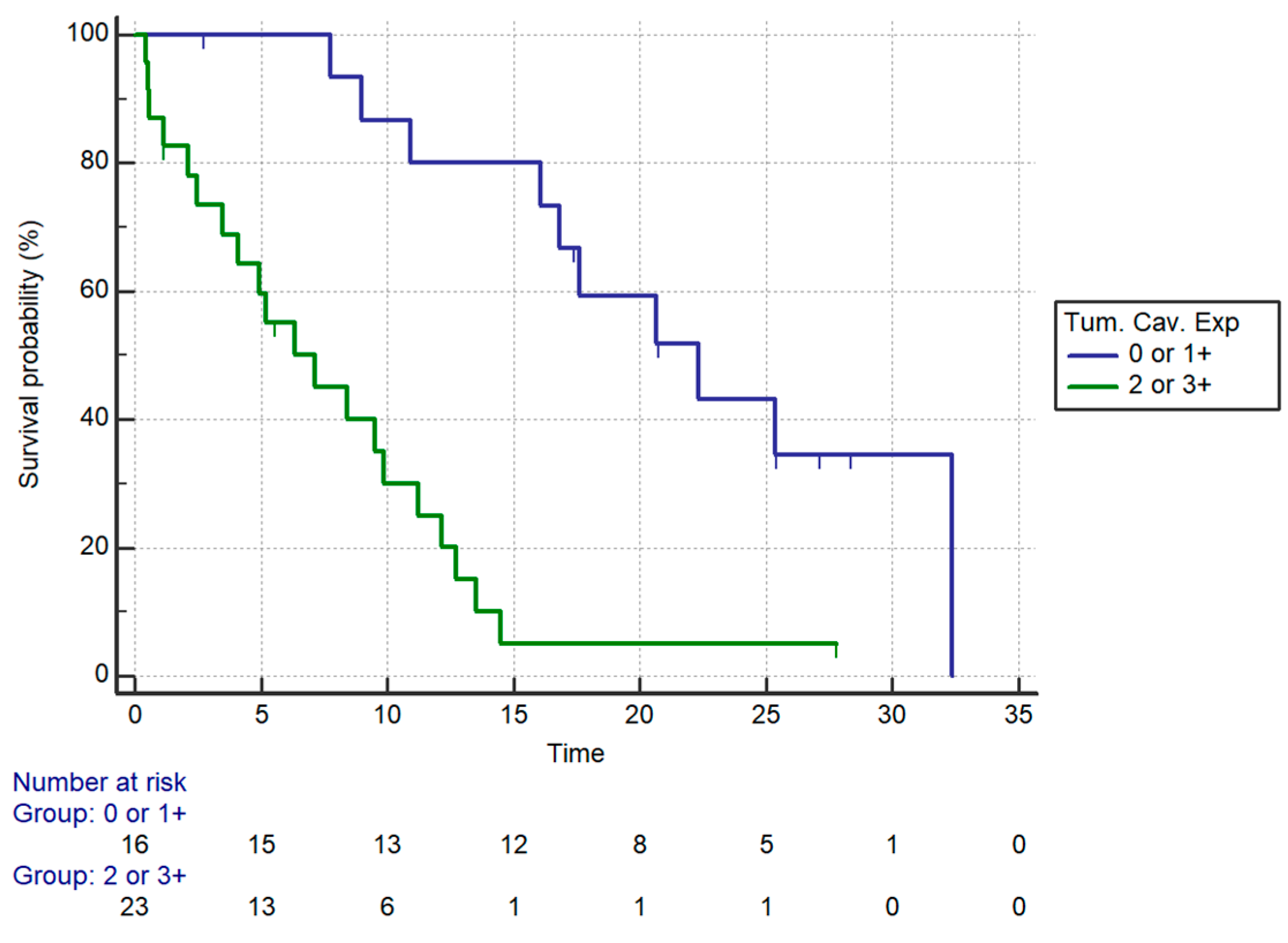