Virtual Care in Patients with Cancer: A Systematic Review
Previous Article in Journal

We report long-term results (median follow-up 12 years) of hypofractionated accelerated radiotherapy (HypoAR) in patients treated with breast-conserving surgery. In total, 367 women were treated with HypoAR. Axillary and supraclavicular area (ASA) were treated in patients with involved nodes. In total, 290 patients (scheme A) received 3.5 Gy/day ×10 fractions (breast/ASA) followed by two 4 Gy fractions with electrons to the affected breast quadrant within 16 days. In total, 77 patients (Scheme B) received 2.7 Gy/day for 16 consecutive fractions (breast/ASA) within 22 days, while concurrently, the affected breast quadrant received an electron booster dose of 0.8 Gy for the first 13 fractions. Amifostine was offered to 252/367 patients. Early radiation toxicity was minimal. Regarding late toxicities, symptomatic breast edema was noted in 2.2%, asymptomatic breast fibrosis in 1.9%, and arm lymphedema in 3.7% of patients. Amifostine reduced early radiation dermatitis (p = 0.001). In total, 2.2% of patients developed contralateral breast and 1.6% other carcinomas. Locoregional recurrence (LR) occurred in 3.1% of patients (0% for in situ carcinomas). Positive margins after surgery, extracapsular node invasion, and HER2-enriched/triple-negative tumors were linked with significantly worse LR-free survival. The involvement of more than three nodes and luminal type other than A were independent prognostic variables of metastasis and death events. HypoAR delivering a biological dose of 50–52 Gy to the breast/ASA is a safe and effective therapy for patients treated with conservative surgery. The risk of carcinogenesis is low. Positive surgical margins, extracapsular node invasion, and HER2-enriched/triple-negative phenotypes appear as a cluster of features linked with a higher risk for locoregional relapse.
Keywords: breast cancer; conservative surgery; radiotherapy; hypofractionation; acceleration breast cancer; conservative surgery; radiotherapy; hypofractionation; acceleration

Conservation of the breast with partial mastectomy techniques followed by postoperative radiotherapy has been an established organ-preserving therapy during the last three decades [1]. Radiotherapy minimizes the risk of locoregional recurrence and decreases death rates in high-risk patients [2]. Conventional radiotherapy (CRT) delivering 50 Gy to the breast and/or axilla and a 16 Gy boost to the tumor bed demand a 7-week schedule that is inconvenient to patients and also results in the overloading of waiting lists in many cancer centers. Due to this inconvenience, patients may decline radiotherapy, especially when residing away from radiotherapy centers [3].
Condensing the radiotherapy schedule using hypofractionation has long been considered prohibited, after the ‘lessons from complications’ paper published by Fletcher GH in 1991, one of the founders of modern radiotherapy [4]. Developments in clinical radiobiology, however, strongly questioned the barriers set (omission of a sentence). An early study by Baillet et al., published in 1990, comparing CRT to a 4-fraction radiotherapy scheme, strongly supported the feasibility of HypoAR in breast cancer [5]. Our ‘mind constructs’ regarding fractionation started to drastically shift after the analysis of large clinical data of prostate cancer, suggesting that tumors may have low α/β-ratio values [6]. In 2005, Yarnold et al., analyzing the long-term results of a randomized trial on 1410 breast cancer patients, estimated that the α/β-ratio of breast cancer is similar to the normal breast tissues, with a median value of 3.6 Gy [7]. This was subsequently confirmed in a radiobiological analysis of the START A randomized trial, providing a median α/β-ratio of 4.6 Gy for breast cancer tissue [8]. Today, the Canadian trial delivering 42,5 Gy in 16 fractions has been worldwide established as an RT schedule for routine use in breast cancer patients treated with conservative surgery [9].
Our early experience, published in 2002, treating breast cancer patients with a 3.5 Gy per fraction for 10 consecutive fractions followed by booster radiotherapy dose provided encouraging results [10]. Indeed, interim reports of subsequent studies with the same schedule applied after partial mastectomy [11] or modified radical mastectomy [12] confirmed the excellent tolerance and efficacy of the regimen. Here, we report long-term results (10–17 years of follow-up) from our one-center trial with HypoAR in patients treated with breast-conserving surgery. Analysis of risk factors for local and distant relapse, as well as for secondary tumors, is also provided.

From January 2003 to December 2010, 367 women with breast cancer treated with breast-conservative surgery were recruited in a prospective trial of hypofractionated and accelerated radiotherapy (HypoAR), focusing on tolerance and efficacy. The study was approved by the Ethics and Research Committee of the University Hospital of Alexandoupolis (SD24, date 6 January 2004). Preliminary results of the trial were published in 2009 [11]. The current study analyzes mature results after 10 to 17 years of follow-up (median 12 years). A follow-up exceeding 10 years was available for 330/367 patients. For 10/367 patients, the follow-up ranged from 2–5 years, while for 27/367 patients, this was shorter than 2 years. In these latter two groups of patients, all patients had no evidence of local or distant disease at the time of the last examination.
All patients had a performance status of 0 (WHO scale). Patients previously treated with radiotherapy in the chest area, pregnant women, patients with concurrent hematological or other malignancies, and patients with significant heart, lung, liver, renal, and psychiatric disease were excluded. All patients gave written informed consent. Table 1 shows the patient, disease, and medical treatment characteristics. Partial mastectomy and axillary node dissection (limited or extensive) were performed in 336/367 patients, while in 31/367 women, axillary dissection was not performed under a clinical/radiological N0,1 stage. Neo-adjuvant chemotherapy was performed in only 12/367 patients.

The GraphPad Prism 7.00 version package (San Diego, CA, USA) was used to perform statistical analysis and graph presentation. The SPSS program was used to perform multivariate analysis. The Fisher’s exact test was used to compare categorical variables and the unpaired two-tailed t-test for group analysis of continuous variables. Survival curves were plotted using the Kaplan–Meier method, and the log-rank test was used to determine statistical differences between life tables. A Cox proportional hazard model, including variables significant at univariate analysis, was used for multivariate analysis of locoregional relapse, metastasis, and death events. A p-value of < 0.05 was considered for significance.

Consistent with the preliminary reports [11], early toxicity was minimal (Table 3). Brisk erythema with/or without patchy moist skin desquamation was noted in 46/367 (12.5%), while moderate breast edema in 10/367 (2.7%) patients. Mild discomfort of the irradiated area was reported by 34 (9.2%) and moderate pain that did not require analgesics in 10 (2.7%) patients. There was no case of clinical or radiographically detected acute pneumonitis. The administration of amifostine was significantly related to a reduced toxicity score of radiation dermatitis (p = 0.001) and breast edema (p = 0.03) but had no effect on the score of pain. Early toxicities were similar between patients receiving the schedule A and B. There was a trend for schedule B to produce higher rates of acute dermatitis (p = 0.06).
Late toxicities were also low (Table 4). Of interest, all toxicities were recorded within the first 24 months of follow-up, and there were no new or deteriorating toxicities after that. Symptomatic tolerable breast edema was noted in 8/367 (2.2%), while definite asymptomatic fibrosis of the breast in 7 (1.9%) patients. Skin telangiectasias were noted only within the tumor bed in 77 (21%) patients (dense in 3.2%). Evident deterioration of post-surgical arm lymphedema was recorded in 14 (3.7%) patients. Chest CT scan confirmed limited signs of in-field lung fibrosis in 37 (10.1%) patients, and there was no case of symptomatic lung disease. The administration of amifostine had a marginal effect on the appearance of fibrosis (p = 0.09) and of breast edema (p = 0.06). There was no difference between schedule A and B.

3.3. Control of In Situ Carcinoma

Locoregional recurrence (LR) occurred in 11/355 (3.1%) patients (in situ cancers excluded from analysis), as shown in Figure 1a. Excluding the 27 patients lost to follow-up at an interval of fewer than two years, the locoregional recurrence rate was 3.3%. Excluding patients with positive surgical margins, this was 2.6% (9/341).
The Kaplan–Meier locoregional recurrence-free survival (LRFS) curves and relevant univariate analysis are shown in Figure 1 and Table 5. Positive margins after surgery were linked with significantly worse LRFS (p = 0.02; Figure 1c). Locoregional recurrence increased to 14.2% (2/14) in these patients. Extracapsular node invasion was also significantly linked with worse LRFS (p = 0.01; Figure 1b), with 13.3% (2/15) recurrence rates. Although the omission of lymphadenectomy had a slightly higher LR rate (7.9%), this was not statistically significant (p = 0.26). Moreover, extensive lymphadenectomy (>16 dissected nodes) did not have any effect on LRFS (p = 0.97).
The group of patients with HER2-enriched or triple-negative tumors also had a higher risk of locoregional recurrence (p = 0.009; Figure 1d). The LR rate was 7.7% (5/65). T-stage, lymphovascular space invasion, and multifocality were not linked with increased risk of LR. Comparing the lobular to the NOS or other histology subtypes, there was no significant difference.
The type of HypoAR regimen and the administration of amifostine had no effect on LRFS.
In a multivariate analysis model including all parameters that were significant at univariate analysis, positive margins, extracapsular nodal invasion, and HER-enrichment/triple-negative disease were independent prognostic variables of LR (Table 5).

It is concluded that HypoAR is a safe and effective therapy for patients treated with conservative surgery. A time-corrected EQD2 of 48–50 Gy proved optimal for both breast and axilla/supraclavicular (omission of sentence). The risk of carcinogenesis is at least as low as the one expected from conventional radiotherapy. Positive surgical margins, extracapsular node invasion, and HER2-enriched/triple-negative phenotype appear as a cluster of characteristics implying a high risk for locoregional relapse. Although the use of booster radiation to the affected breast quadrant is not a standard practice in many institutions, the current study provides evidence that this can be safely applied in subgroups of patients with high risk, but its therapeutic value needs evaluation in randomized trials.

The study has been approved by the local Ethics and Research Committee (SD24/6-1-2004).

All data are available in the files of the Department of Radiotherapy and Oncology, Democritus University of Thrace. The data presented in this study are available on request from the corresponding author. The data are not publicly available due to ethical reasons.

The λ-value reflecting the radiation dose lost (for treatment protraction) or gained (for treatment acceleration) daily is of critical importance to estimate the equivalence of accelerated to conventional schemes, in terms of antitumor efficacy and normal tissue toxicity.
Although such a value has not been directly reported for normal breast tissues, the λ-value can be postulated by applying simple radiobiological analysis (using the time-corrected EQD2 formula shown in the methods) on relevant results obtained from clinical trials, as follows: 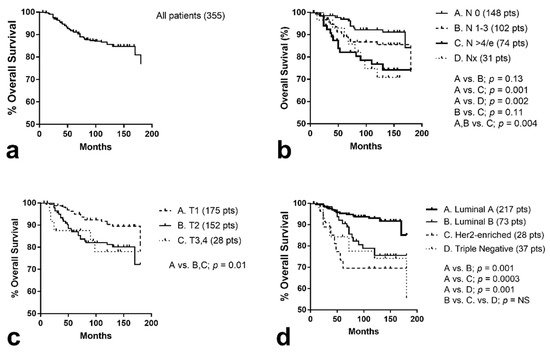 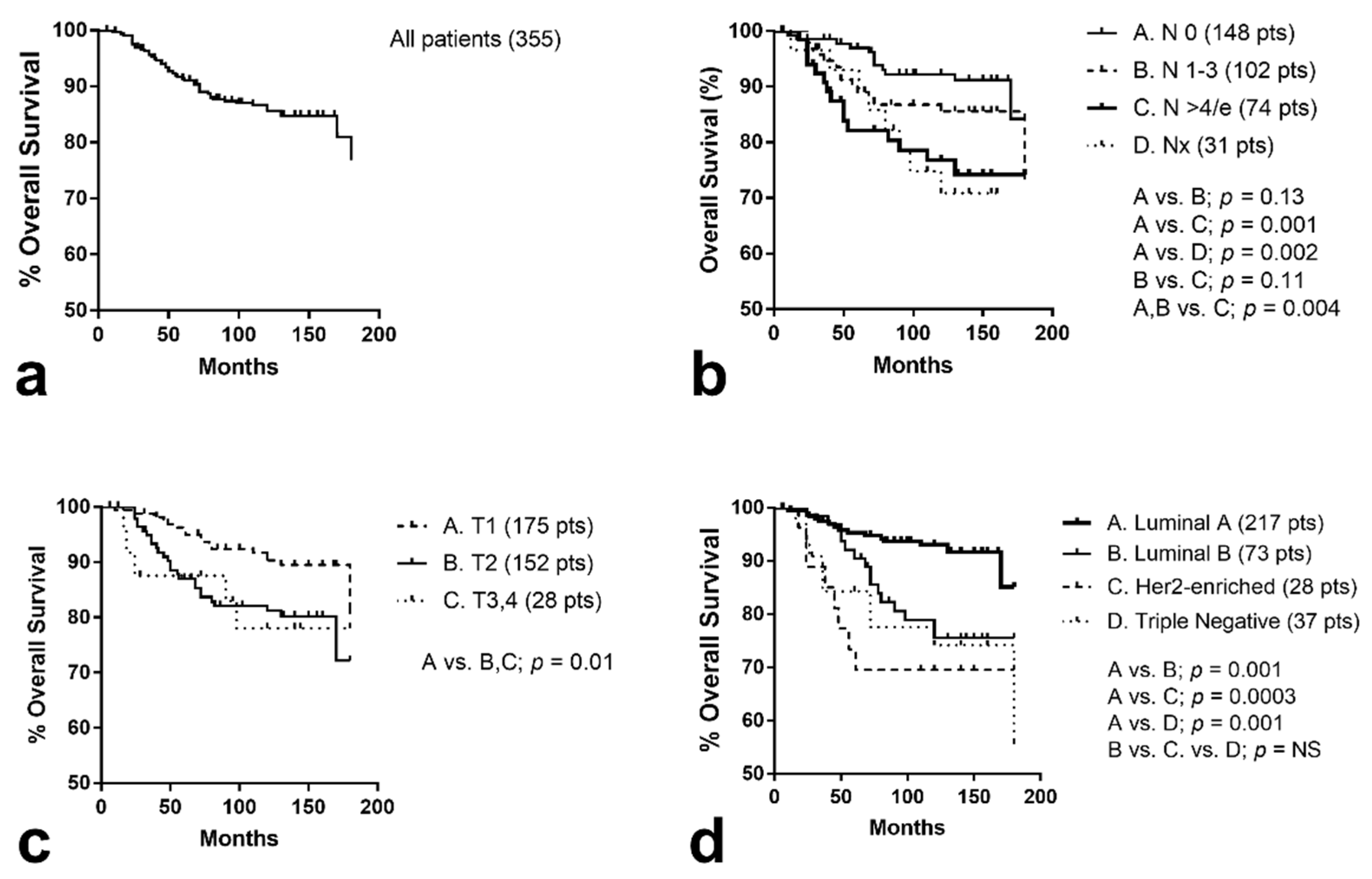