Virtual Care in Patients with Cancer: A Systematic Review
Previous Article in Journal

We report long-term results (median follow-up 12 years) of hypofractionated accelerated radiotherapy (HypoAR) in patients treated with breast-conserving surgery. In total, 367 women were treated with HypoAR. Axillary and supraclavicular area (ASA) were treated in patients with involved nodes. In total, 290 patients (scheme A) received 3.5 Gy/day ×10 fractions (breast/ASA) followed by two 4 Gy fractions with electrons to the affected breast quadrant within 16 days. In total, 77 patients (Scheme B) received 2.7 Gy/day for 16 consecutive fractions (breast/ASA) within 22 days, while concurrently, the affected breast quadrant received an electron booster dose of 0.8 Gy for the first 13 fractions. Amifostine was offered to 252/367 patients. Early radiation toxicity was minimal. Regarding late toxicities, symptomatic breast edema was noted in 2.2%, asymptomatic breast fibrosis in 1.9%, and arm lymphedema in 3.7% of patients. Amifostine reduced early radiation dermatitis (p = 0.001). In total, 2.2% of patients developed contralateral breast and 1.6% other carcinomas. Locoregional recurrence (LR) occurred in 3.1% of patients (0% for in situ carcinomas). Positive margins after surgery, extracapsular node invasion, and HER2-enriched/triple-negative tumors were linked with significantly worse LR-free survival. The involvement of more than three nodes and luminal type other than A were independent prognostic variables of metastasis and death events. HypoAR delivering a biological dose of 50–52 Gy to the breast/ASA is a safe and effective therapy for patients treated with conservative surgery. The risk of carcinogenesis is low. Positive surgical margins, extracapsular node invasion, and HER2-enriched/triple-negative phenotypes appear as a cluster of features linked with a higher risk for locoregional relapse. View Full-Text
Keywords: breast cancer; conservative surgery; radiotherapy; hypofractionation; acceleration breast cancer; conservative surgery; radiotherapy; hypofractionation; acceleration
►▼ Show Figures 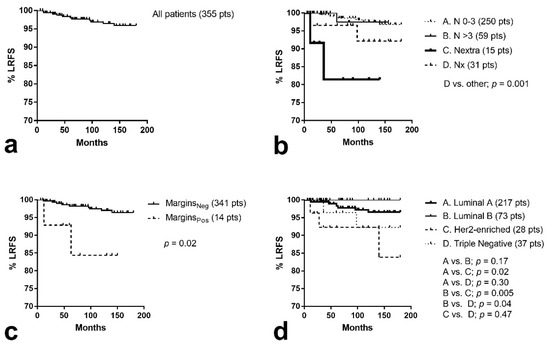