Patients with advanced pancreatic cancer (APC) experience many disease-related symptoms. ESAS-r measures the severity of 9 symptom domains and has been validated for use in the ambulatory oncology setting. We aimed to describe symptom burden at baseline for patients with APC treated with modern chemotherapy (CT), and to determine whether symptom burden at baseline is prognostic. Patients diagnosed with APC between 2012–2016, treated with ≥1 cycle of CT, who completed ≥1 ESAS-r were identified. Descriptive statistics were used to report symptom burden and common moderate-to-severe symptoms. A joint model was used to describe the trajectory of ESAS-r during follow-up while controlling for death. Multivariable Cox regression was used to identify independent predictors of death. Of 123 patients identified, the median age was 65 and 61% had metastatic disease. The median baseline ESAS-r total symptom distress score (TSDS) was 24. A total of 86% of patients had at least one symptom score of ≥4 at baseline, with the most common being: fatigue, nausea, anxiety, and shortness of breath. Median overall survival was 10.2 months. Baseline TSDS was not predictive for worse survival in the era of modern CT. Patients with APC have a high burden of cancer-associated symptoms and a high prevalence of moderate-to-severe symptoms. Early intervention has the potential to improve quality of life in this group of patients and should be investigated.
Keywords: symptom burden; pancreatic cancer; patient-reported outcomes; ESAS; prognosis symptom burden; pancreatic cancer; patient-reported outcomes; ESAS; prognosis

Pancreatic cancer is the third leading cause of cancer death in Canada [1]. Most cases are diagnosed when disease is advanced and incurable [2]. Patients with advanced pancreatic cancer (APC) experience many disease-related symptoms, including pain, anorexia, weight loss, fatigue, nausea, diarrhea, depression, and anxiety [3,4,5,6]. Symptom burden increases closer to death [7,8].
The revised Edmonton Symptom Assessment System (ESAS-r) [9] is a patient-reported outcome (PRO) tool which assesses the intensity of nine symptoms, including pain, tiredness, drowsiness, nausea, appetite, dyspnea, anxiety, depression, and overall wellbeing. Each symptom is given a score on a scale of 0–10, with 0 defining the absence of a symptom and 10 defining the worst possible severity. A rating scale of 1–3 represents mild severity, 4–6 moderate severity, and 7–10 high severity [10,11]. The total symptom distress score (TSDS) is the sum of the 9 individual symptom scores with 90 being the highest possible total [12]. ESAS-r has been shown to be a reliable and valid tool in patients with advanced cancer in an outpatient oncology setting [9,13,14,15,16]. Since 2011–2012, ESAS-r has been completed by patients at each ambulatory visit at our provincial cancer center. Patients complete a paper copy, which clinical staff subsequently input into the electronic medical record.
Over the last decade, combination chemotherapy regimens such as 5-fluorouracil, irinotecan and oxaliplatin (FOLFIRINOX) and nab-paclitaxel and gemcitabine (NG) have become the standard of care for APC, as they have been shown to improve survival, without a deterioration on quality of life (QOL), compared to single-agent gemcitabine [17,18,19]. The symptom burden soon after diagnosis in patients with APC who receive chemotherapy (CT) is not clearly defined. It is unknown whether higher baseline symptom burden is a poor prognostic factor for overall survival (OS) in patients with APC receiving modern CT. The aims of this study were:

1
To describe the symptom burden of patients with APC at baseline, using the ESAS-r.
2
To examine whether baseline ESAS-r is a prognostic marker for OS.

Patients ≥ 18 years of age and diagnosed with locally advanced unresectable or metastatic pancreatic cancer between 2012 to 2016 and treated with at least one cycle of CT in Manitoba were identified using the Manitoba Cancer Registry. Patients were included if at least one ESAS-r entry was present in the electronic medical record. All ESAS-r scores completed from baseline to death were extracted from the electronic medical record. The baseline ESAS-r measurement was completed within the 30 days preceding the start of CT. ESAS-r assessments with missing data were excluded.
Baseline patient and treatment characteristics, including age, sex, date of diagnosis, clinical stage, Eastern Cooperative Oncology Group (ECOG) performance status, CT regimen received, date of progression, and date of death were extracted via the Manitoba Cancer Registry and retrospective chart review.
The TSDS was calculated by adding up the sum of the scores for each of the 9 symptom domains. Box-percentile plots were used to demonstrate distributions. Symptoms were also categorized into a physical subset score (sum of pain, tiredness, drowsiness, nausea, lack of appetite and shortness of breath) and a psychological subset score (sum of depression and anxiety) for descriptive purposes. The correlations between TSDS and the physical and psychological subsets were assessed using Spearman correlation.
Descriptive statistics were used to report baseline characteristics, symptoms at baseline, and the TSDS. TSDS according to primary tumor location and according to younger (<65) and older (≥65) age was explored. A joint model was used to describe the trajectory of ESAS-r during follow-up while controlling for death [20]. This is a model that joins a mixed model (predicting ESAS-r) and a survival model (predicting death). Splines were used to account for non-linear relationships and an interaction term between baseline TSDS and follow-up time was also included. To evaluate the impact of the time-varying status of TSDS during follow-up on death, a joint model was again used, which creates an endogenous variable through the mixed model to be applied in the survival model. R version 4.0.3 [21] was used to perform analyses using the R packages of JM [22] and rms [23]. OS was estimated using the Kaplan-Meier method. Multivariable Cox regression was used to identify independent predictors of death, including baseline TSDS.

A total of 123 patients diagnosed with APC from 2012–2016 who received at least one cycle of CT and completed at least one ESAS-r assessment were identified. Baseline characteristics can be seen in Table 1. The median age was 65 years (range 42 to 88), 52.8% were male, and 61% had metastatic disease. Most patients (82.1%) had an ECOG performance status of 0–1. The most common CT regimen received was 5-Fluorouracil, Irinotecan and Oxaliplatin (FOLFIRINOX) (69.1%), followed by nab-Paclitaxel plus Gemcitabine (NG) (22%). Only 11 (8.9%) patients received single-agent gemcitabine. Among the 123 patients, there were 1608 unique ESAS-r assessments. A total of 107 (87.0%) of patients completed ≥2 assessments, while 22.8% of patients had >21 completed assessments. In the cohort, 9.2% had at least 1 ESAS-r assessment with missing data, which were removed from analysis.

At baseline, the median TSDS of the whole cohort was 24. ESAS-r TSDS in the 10th percentile and 90th percentile was 6.2 and 53, respectively. The median symptom scores at baseline for pain, tiredness, drowsiness, nausea, lack of appetite, shortness of breath, depression, anxiety, and wellbeing were 1, 4, 1, 2, 1, 3, 1, 2 and 2 respectively (Figure 1).
Younger patients (under 65 years old) had a median TSDS of 29, whereas older patients (65 years and older) had a median TSDS of 21. At baseline, the median TSDS according to tumor location was 21.5 for a primary in the head/neck of the pancreas, 28 for the body of the pancreas, and 24.5 for the tail of the pancreas.
At baseline, 106 (86.2%) patients reported at least one moderate-to-severe symptom (score ≥ 4). Ninety-five (77.2%) had at least one physical symptom scored at ≥4, while sixty-five (52.9%) had at least one psychological symptom scored at ≥4 at baseline. The most common symptoms with a reported score of ≥4 at baseline were tiredness (56.9%), anxiety (50.4%), shortness of breath (48.8%) and nausea (9.8%) (Table 2).
Spearman correlations demonstrated high associations between baseline TSDS and physical symptom scores (rho = 0.94; p < 0.001) and psychological symptom scores (rho = 0.83; p < 0.001). Point-biserial correlations between TSDS and the subsets indicated moderate correlation. However, the results from multivariable models indicated little change when the subsets were included/excluded.

ESAS-r over time (0 to 18 months) is represented in Figure 2. Using a joint model (to predict TSDS values during follow-up while adjusting for death during follow-up), baseline TSDS was related to TSDS during follow-up. As seen graphically in Figure 2A, TSDS decreases for the first few months after initiating CT, but after 6 months, TSDS starts to increase. TSDS at 15 to 18 months is similar to TSDS at baseline. When disease progression was included as a time-varying predictor, it was not related to worsening TSDS (p = 0.750). When tumor location was included as a predictor of ESAS-r over time, patients with tumors in the head/neck and tail had higher ESAS-r scores than patients with tumors in the body of the pancreas (p = 0.032).
This was found among younger patients, but not among older patients. When analyzed according to age, younger patients experienced a drop in ESAS-r during follow-up (Figure 2B), whereas older patients did not experience this same drop (Figure 2C).

The study was approved by the Institutional Review Board of UNIVERSITY OF MANITOBA (HS20710, H2017:126).

C.A.K. has a research grant from Celgene Inc. The other authors declare no conflict of interest. 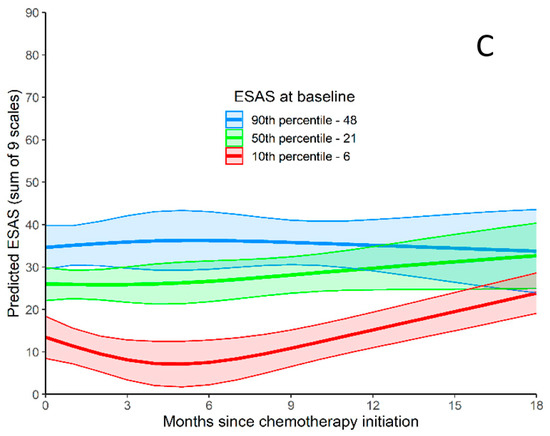 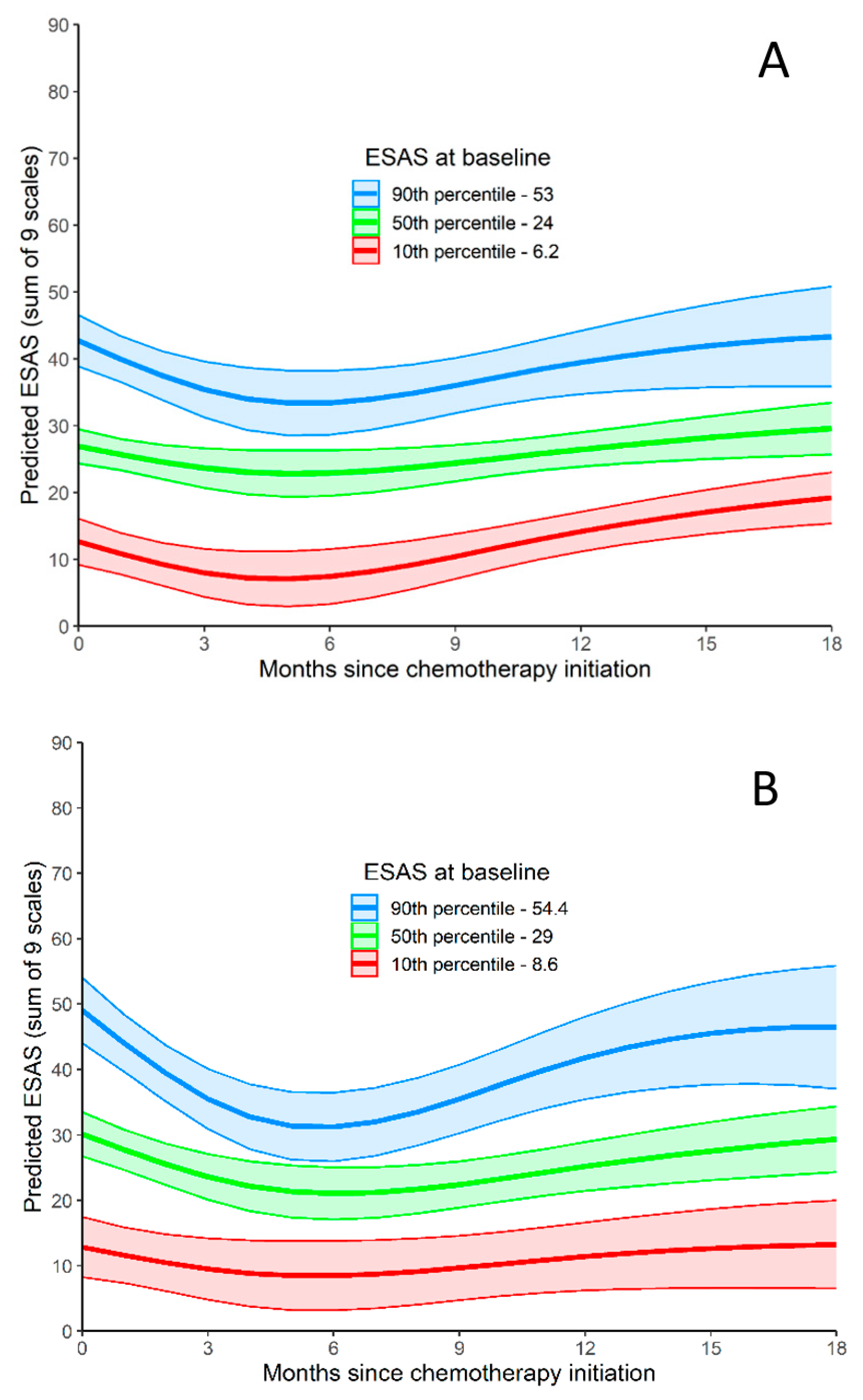