Satisfaction among Cancer Patients Undergoing Radiotherapy during the COVID-19 Pandemic: An Institutional Experience

Canada has a long tradition of leading practice-changing clinical trials in oncology. Here, we describe methodology, results, and interpretation of oncology RCTs with Canadian involvement compared to RCTs from other high-income countries (HICs). A literature search identified all RCTs evaluating anti-cancer therapies published 2014–2017. RCTs were classified based on the country affiliation of first authors. The study cohort included 636 HIC-led RCTs; 155 (24%) had Canadian authors. Three-quarters (112/155, 72%) of Canadian RCTs were conducted in the palliative setting, compared to two thirds (299/481, 62%) of RCTs from other HICs (p = 0.022). Canadian RCTs were more likely than those from other HICs to be supported by industry (85% vs. 69%, p < 0.001). The proportion of positive Canadian trials that met the ESMO-MCBS threshold for substantial clinical benefit was comparable to RCTs without Canadian authors (29% vs. 32%, p = 0.137). Thirteen percent (20/155) of all Canadian trials were affiliated with the Canadian Cancer Trials Group (CCTG). Canada plays a meaningful role in the global cancer research ecosystem but is overly reliant on industry support. The very low proportion of trials that identify a new treatment with substantial clinical benefit is worrisome. A renewed investment in cancer clinical trials is needed in Canada.
Keywords: cancer; clinical trials; research funding; Canada; high-income countries cancer; clinical trials; research funding; Canada; high-income countries

Randomized controlled trials (RCTs) are the gold standard for evaluating the efficacy of new cancer therapies [1]. Since widespread adoption of the RCT in the 1970s, cancer clinical trials have evolved considerably. Work by our group and others have shown that RCTs have evolved over time to become larger, more likely to be industry-funded, with more multicenter and international involvement [2,3,4]. There has also been a marked shift to the use of surrogate primary endpoints [5].
While the majority of North American research output is driven by the United States (US), Canada’s cancer research spending is comparable to that of other high-income countries across Europe and Asia [6,7]. Like other parts of the world, most clinical research funding in Canada now comes from industry sources as it has become increasingly difficult for independent Canadian investigators to support the increasing costs of clinical trial infrastructure [8]. Several groups have demonstrated that the volume of research output is associated with allocation of research funds rather than burden of disease [9,10,11,12,13].
Prior studies have described global research spending by country (including that of Canada) [6,7]. Other studies have examined the allocation of cancer research funds within Canada across disease sites [9,10,11,12]. However, there is a lack of data that describes RCT output from Canada compared to other high-income countries (HICs). In this study, we describe cancer RCTs conducted in HICs during 2014–2017 and compare those with Canadian authors to those without any Canadian involvement. The objective was to compare and contrast methodology, results, and their interpretation of Canadian RCTs compared to other HICs. Results from this analysis can offer insights into how to increase the impact of clinical cancer research in Canada.

This retrospective cohort study was designed to identify cancer RCTs published globally between 2014 and 2017. The present report is a secondary analysis to understand Canada’s contribution to the global research ecosystem using other HICs as a comparator. The primary report of the global population including the electronic search strategy has been reported elsewhere [14]. A structured literature search was designed using PUBMED to identify phase III RCTs evaluating cancer-targeted therapies published during 2014–2017. Studies were included if they were: a phase III study, involved any type of cancer, and tested a cancer-directed therapy (systemic, radiation, or surgery). The final study population was restricted to RCTs led by HIC defined by the institutional affiliation of the first author.

All eligible studies were reviewed using a standardized data abstraction form to capture information regarding authorship, study design, and results. Data abstraction was performed independently by two authors (J.C.W. and S.S.). The senior author (C.M.B.) periodically performed random duplicate abstraction to ensure data abstraction was of high quality. At completion of data collection, 30 studies were randomly chosen for review; only 11/1020 variables (1%) were found to be discordant with the original assessment. Another author (J.D.P.) with extensive experience using the European Society of Medical Oncology-Magnitude of Clinical Benefit Results Scale (ESMO-MCBS) derived grades for all superiority studies of systemic therapy that met their primary endpoint. Studies were classified into country of origin based on the institutional affiliation of the first author.

Descriptive results were generated for the full study cohort. Comparisons were made between studies that had any Canadian co-authors and those that were led by other HICs without any Canadian involvement. Journal impact factor (IF) was assigned using the impact factor from 2016 (regardless of year of publication), as reported by the Journal Citation Reports Impact Factor [15]. We compared the effect size (as measured through hazard ratio) of “positive” superiority RCTs between groups. Version 1.1 of the ESMO-MCBS was used to derive a grade based on the positive endpoint for systemic therapy [16]. Grades of A and B (curative setting) and 5 and 4 (palliative setting) were considered to be “substantial” benefit.
Statistical analysis was conducted using IBM SPSS version 26.0 for Windows (Armonk, New York, NY, USA, 2019). Outcomes were compared using the Pearson Chi Square or Fisher’s Exact test, and independent samples t-tests or the Mann–Whitney U as appropriate. p values less than 0.05 were considered significant; no adjustments for multiple comparisons were made.

3.1. Results of the Search Strategy

The search strategy identified 2275 publications. As shown in Supplementary Figure S1, 1639 studies were not eligible for the present analysis. The final study cohort included 636 HIC-led RCTs of which 155 (24%) had Canadian authors; 31 RCTs were led by Canadian investigators (12 Canadian first author, 13 Canadian last author, and 6 had both).

In summary, Canada plays a meaningful role in the global RCT ecosystem. Canadian RCTs are heavily dependent on funding from the pharmaceutical industry and primarily test new systemic therapies in the palliative context. Only one third of positive Canadian trials (and 13% of all trials) identify a new treatment that is associated with substantial clinical benefit; urgent efforts to improve on this are warranted. It is notable that only 14% of Canadian trials are conducted without industry funding. These data highlight the need for more investment in cancer clinical trials from the government and philanthropic sectors to ensure that Canadian RCTs address diseases and questions that are most likely to improve outcomes for patients in Canada and beyond.

The following are available online at https://www.mdpi.com/article/10.3390/curroncol28020143/s1, Figure S1: Results of search strategy for all oncology randomized controlled trials conducted during 2014–2017.

There is no publicly archived dataset available. The authors utilized publicly available information from published RCTs to create a database for this study.

Booth is supported as the Canada Research Chair in Population Cancer Care. 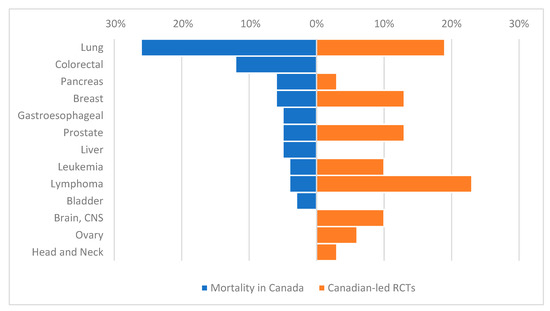