Articles
Effects of Heavy Metal Contamination upon Soil Microbes: Lead-induced Changes in General and Denitrifying Microbial Communities as Evidenced by Molecular Markers
by

:
Lead (Pb) is a common environmental contaminant found in soils. Unlike other metals, Pb has no biological role, and is potentially toxic to microorganisms. Effects of low (1 ppm) and high (500–2000) levels of lead (Pb) upon the soil microbial community was investigated by the PCR/DGGE analysis of the 16S and nirK gene markers, indicative of general microbial community and denitrifying community, respectively. Community analysis by use of those markers had shown that Pb has detectable effects upon the community diversity even at the lowest concentration tested. Analysis of sample diversity and similarity between the samples suggested that there are several thresholds crossed as metal concentration increase, each causing a substantial change in microbial diversity. Preliminary data obtained in this study suggest that the denitrifying microbial community adapts to elevated levels of Pb by selecting for metal-resistant forms of nitrite reductases.
Keywords:
Lead; 16S; soil; DGGE; microbial diversity

Soil samples for low-level experiments have been collected well in advance and stored in the lab for approx. 24 months. The soil has not been extensively characterized; however, visually it resembled Mississippi silty clay used in the other set of experiments. Pb was added as aqueous solution of Pb nitrate in 10 mL of water; amount of Pb was calculated to supply 1 ppm of Pb metal to the soil sample before water addition. The control sample received 10 mL of distilled water with no Pb. Samples were sealed and incubated at ambient temperature (18–24°C) for 18 months.
High-Pb experiments were conducted in a mixture of pulverized Delta topsoil (Yazoo silty clay) and peat humus (2:1 volumetric proportions). Predetermined amounts of soils were artificially contaminated with appropriate amounts of lead nitrate to yield the desired concentrations (0, 500, 1,000 and 2,000 mg Pb/kg dry soil) and incubated in the greenhouse.
At the end of the experiments, soil subsamples of ca. 0.5 gram were collected and DNA recovered using bead beating followed by modified phenol-chloroform procedure [20]. Crude DNA extracts were purified using GeneClean kit from Stratagene (La Jolla, CA) according to manufacturer’s instructions.
Two markers were selected for amplification in this study. Short (∼200 bp) 16S rRNA gene fragment was recovered with a P2-P3 primer set [35]. A ca. 200 bp fragment of nirK, a marker for NirK copper-containing nitrous oxide reductase was amplified by use of nirK1fnirK3r primer pair [5]. Forward primer nirK1f was modified by attaching a GC-tail at the 5′ end in the manner similar to the P2 primer above. Standard PCR mixture [43] was used to amplify the fragments, with 5 minutes intial melting time at 95°C, followed by 35 cycles of 30 seconds melt at 95°C, 30 seconds annealing at 45°C and 60 seconds extension at 72°C. Cycling was followed by 5 minutes of final extension at 72°C. Resulting fragments were checked for proper and uniform size by 1.2% agarose gel electrophoresis in 0.5x TAE buffer against 100 bp DNA ladder (New England Biolabs, Ipswich, MA).
Vertical gradient DGGE gel was cast using a Northstar gradient maker coupled to a peristaltic pump. Gel concentration was set at 60% denaturant at the bottom and 20% at the top. Details on casting a similar gel are provided elsewhere [35], except that 0.5x TAE was used both in the gel and in the electrophoresis tank. Freshly cast gel was allowed to polymerize for ca. 1 hour and the sides of the gel cassette were sealed with silicone sealant to avoid lateral lane drift. Gel was equilibrated in the buffer tank at the run temperature (70°C) for 2 hours. About 15 μL of amplified sample was loaded on the gel and voltage applied to the tank at 60V for 18 hours. Following the run, the gel was extracted from the cassette, rinsed and stained with ethidium bromide solution (1 μg/mL) for one hour, destained in distilled water for 90 minutes and photographed with UV transillumination. Diversity of the microbial community was analyzed from the recorded gel images.
Diversity analysis was conducted by recording density profile data of a DGGE gel lane using Scion Image for Windows. Density profile was converted into a string of values and a plot generated in Open Office for Linux. Peaks recorded in the plotted profile were matched to the gel image and peak position and height measured using built-in measurement tool in GIMP for Linux. Aggregate and individual peak heights were used to compute Simpson’s diversity index [45]. Jaccard similarity index [24] was computed on the basis of presence/absence of matched peaks in the samples.

Analysis of the microbial community diversity by use of the 16S marker had shown that the soils used in the experiments had different microbial community makeup even in the absence of added metal (Figs. 1 and 4). Even though this observation would confound comparative analysis of high vs. low metal levels, we presume that the general trends observed in the metal-affected samples hold under those conditions.
Exposure to low levels of lead resulted in a shift in the community makeup. Decrease in 16S diversity was observed based on Simpson’s index (Fig. 5B), although community change was small. Exposure of the soil samples to radically higher concentrations of lead resulted in a community shift, steadily reducing 16S diversity as Pb content increased from 0 to 2000 ppm (Fig. 5A, B).
Assessment of similarity between the high-lead samples had shown that the most dissimilar samples were the 0–2000 ppm pair. Sample pairs 0–500 and 0–1000 exhibited the next lowest level of similarity, followed by 500–2000 and 1000–2000 pairs. The most similar samples were the 500–1000 pair (Table 1).
Analysis of the denitrifying populations by use of the nirK marker had shown a moderate decrease in diversity of those organisms (Fig. 5C, D). Based on Jaccard similarity index of control-treatment pair, control and treatment nirK populations were more dissimilar than 16S. Higher (500–2000 ppm) levels of lead resulted in decrease of nirK diversity, with a modest rebound at 2000 ppm. Jaccard similarity index was the highest in case of the 500–1000 ppm sample pair (Table 2).

Heavy metals have been known to disrupt ecosystem structure and functioning for a long time. In the multicellular organisms, heavy metal target specific organs and pathways [18,19], resulting in disruption of definitive metabolic functions. By the same token, one can expect that some pathways in microbes would be more sensitive to metal than others, resulting in selective inhibition as metal concentration increases [17, 18]. Selective inhibition of specific pathways would result in decline of both numbers and diversity of organisms relying on those pathways, and one could expect such shift to occur at lower metal concentrations than needed to effect community changes evidenced by the 16S profile. Such shift in a community composition could lead to profound changes in the biogeochemical processes in the environment [26].
All metal levels produced at least some change in the community. Invariably, such change resulted in decrease of genetic diversity of the community compared to the control, regardless of the level of metal used and marker observed. Almost in every case, higher metal levels lead to lower community diversity, with one notable exception discussed below.
One of the more important observations of this study is the substantial change produced in both 16S and nirK community profiles by Pb addition at 1 ppm. Whereas change was detected by use of both those markers, change in the nirK pool was substantially more profound, as evidenced by the fact that post-exposure nirK profile differed (according to Jaccard index) from its pre-exposure counterpart to a greater extent than the 16S.This observation suggests that denitrification pathway may be the one uniquely sensitive to metal exposure. If true, disruption of denitrification could potentially enhance nitrogen retention by the soil, leading to a host of related phenomena, from increased nonpoint nutrient pollution in the nearby water bodies to enhanced plant growth and easier remediation of the metal-contaminated soils.
Exposure of soils to higher levels of Pb (500–2000 ppm) resulted in substantial community shifts. Consistently declining community diversity at higher metal levels was evidenced by both 16S and nirK marker profiles. Such a decline could be taken as the evidence of microbial population activities being substantially disrupted by the metal presence. On the other hand, modest rebound of nirK diversity at 2000 ppm Pb can not be adequately explained within this framework.
The highest degree of difference (or lowest degree of similarity) was observed between control samples and those that had lower levels of metal added. This suggests that above a certain threshold, addition of more metal has only a limited effect, a notion supported by the fact that 500 and 1000 ppm samples were the most similar ones. It appears that the further increase in metal content to 2000 ppm triggers another change in community diversity, suggesting that another threshold value was passed. The threshold-like effects of heavy metals could be explained by potential presence of several groups of organisms capable of the same type of metabolism, yet having various metal tolerances. More metal-tolerant bacteria would be outcompeted in the absence of metal, whereas presence of metal would shift the community towards more metal-tolerant guilds.
In the preliminary manner, this study demonstrates that both low (1 ppm) and high (500–2000 ppm) levels of heavy metals in soul could dramatically shift the makeup of a microbial community, almost certainly decreasing community diversity. Some classes of organisms (such as denitrification-capable bacteria) appear to be affected to a greater extent than generalized microbial community; such selective inhibition could have profound effects on community function and structure, as well as on biogeochemical phenomena in situ. It also appears that the heavy metals affect microbial communities in a threshold-like manner, suggesting the presence of sub-communities with different levels of metal tolerance.
Our data show that heavy metals have profound effect upon the general and denitrifying microbial community, as observed by others [16, 17, 26] and as our original hypothesis suggested. In turn, denitrifying community appeared to adjust to elevated metals by selecting for putatively metal-resistant enzyme forms. Further studies, including sequencing of the recovered DNA fragments are needed to identify the changes conferring metal resistance to denitrification-related enzymes. 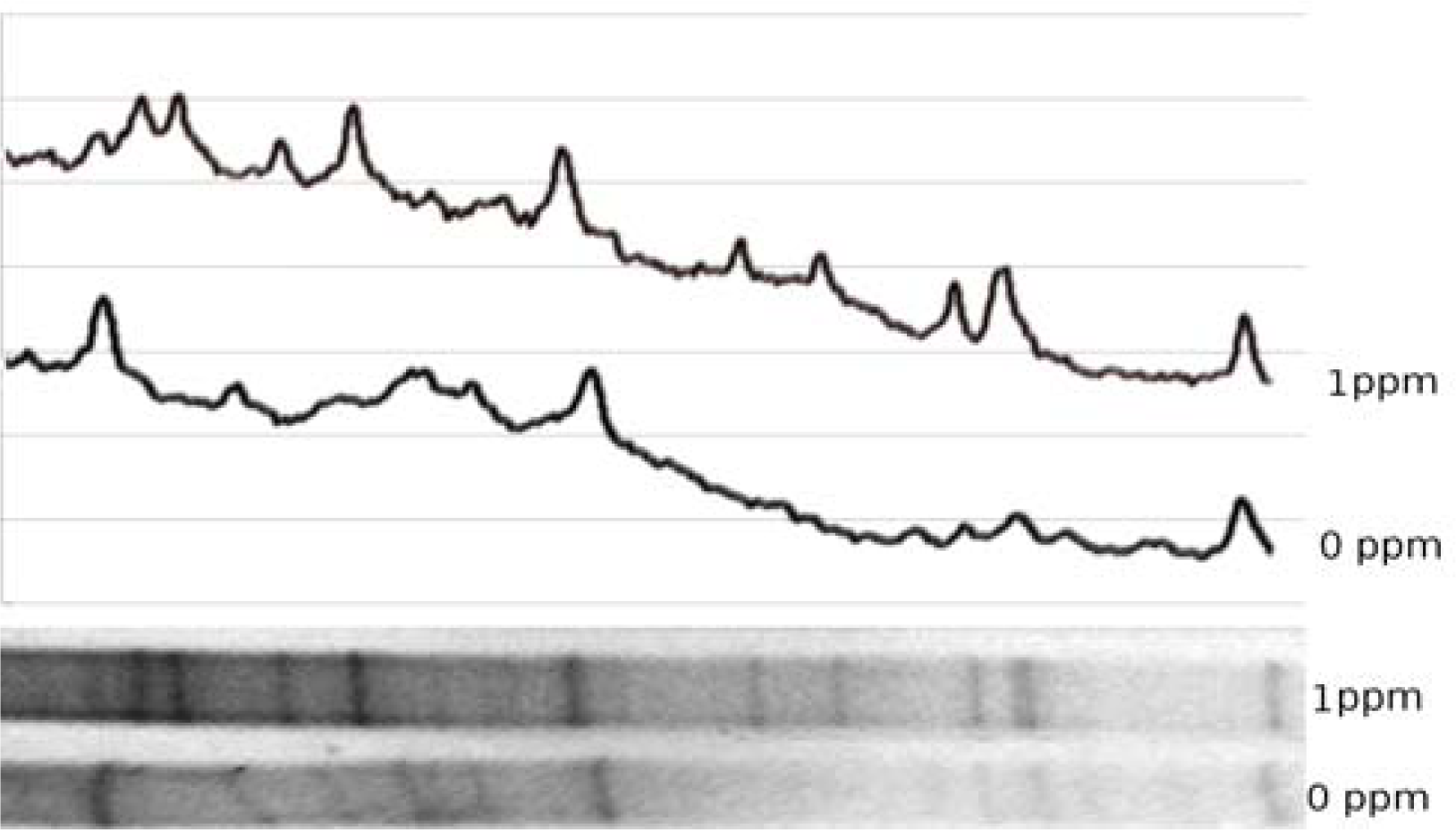 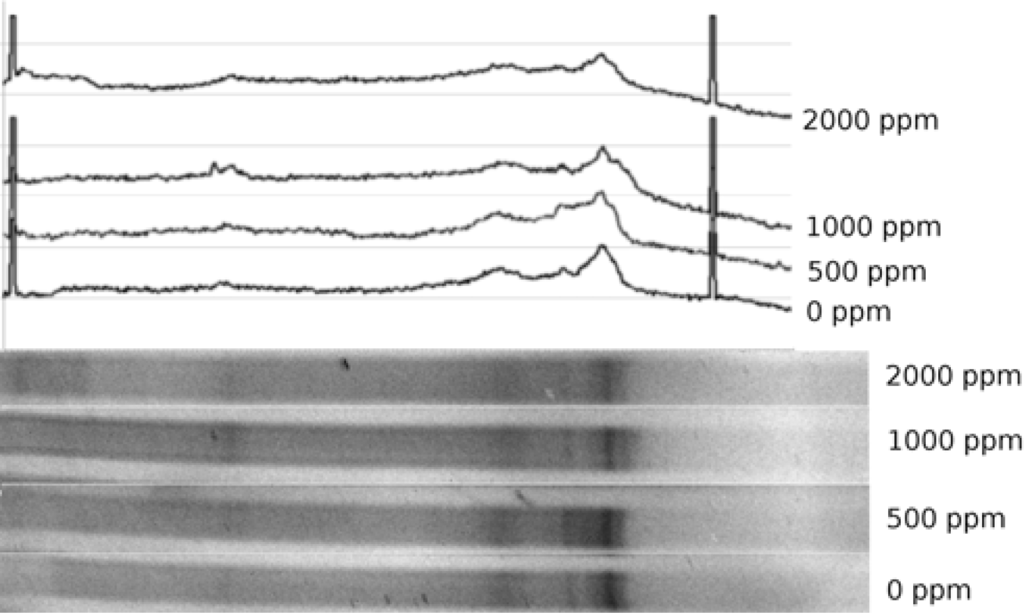 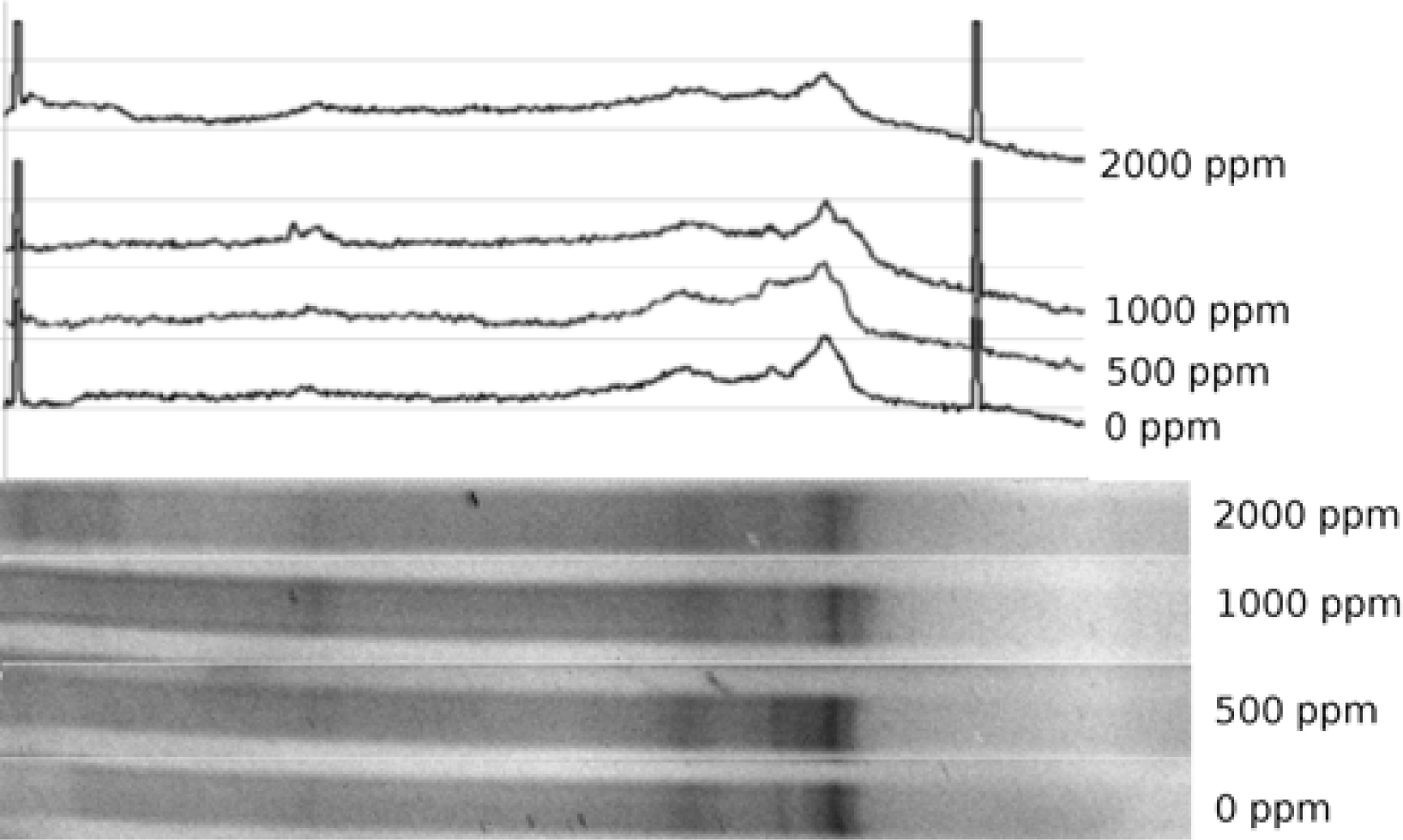 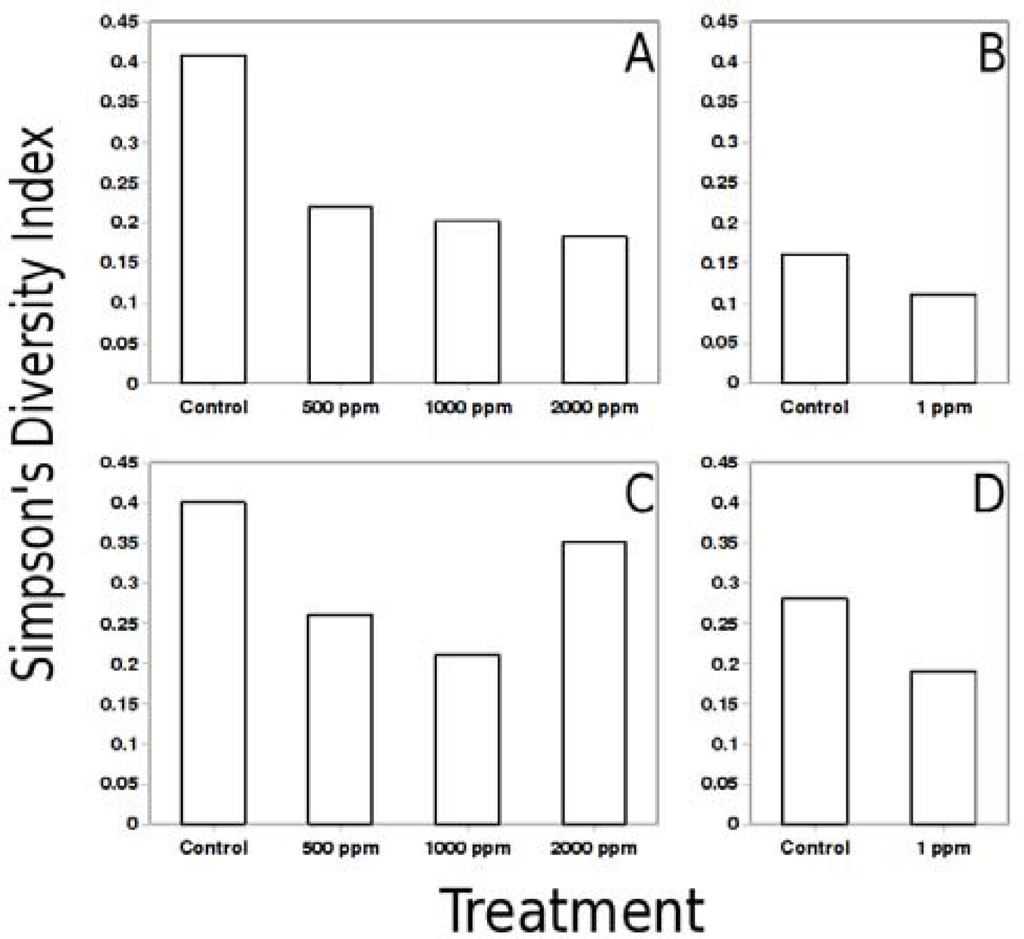 This research was made possible through support provided by NASA through The University of Mississippi (Subcontract No. 08-08-012 to Jackson State University to M. F. B.) under the terms of Agreement No. NNG05GJ72H. The opinions expressed herein are those of the authors and do not necessarily reflect the views of NASA or The University of Mississippi. Summer salary support was provided to D.S. via the JSU Center of the University Scholars grant. Data processing (with exception of gel profile generation) was accomplished by use of free open source software; authors are indebted to Ubuntu, Open Office and GIMP development communities.