An Examination of US COVID-19 Vaccine Distribution in New Jersey, Pennsylvania, and New York
Previous Article in Journal

:
Philippine research productivity in neurology has not been fully characterized. We investigated the research output of adult and child neurologists in the Philippines and correlated this to the Philippine socioeconomic and healthcare indices among different regions. We used electronic databases to retrieve studies published by Filipino neurologists using the 2022 Philippine Neurological Association website as reference. We included all studies published until December 2021. Official government region-specific socioeconomic indices were used. Correlational analysis was completed on bibliometric indices and collected data. We retrieved 746 articles from 274 of 526 Filipino neurologists which were published in 245 publications over 45 years with 12,409 citations. The National Capital Region (NCR) had the most publications (n = 662, 88.7%) and citations (n = 10,377, 83.6%). Research productivity was positively correlated with population, gross domestic product (GDP), health expenditure, number of healthcare establishments, neurologists, and research personnel. The Philippine research landscape is dominated by articles of neurologists belonging to institutions in the NCR, which has the greatest number of neurologists, training institutions, and highest GDP. There is a need to address the disparity seen in other regions to bridge gaps in healthcare, health human resources, and health information through research.
Keywords:
bibliometrics; Philippine neurology; Philippines; research productivity; neurology

The Philippines is an archipelago comprised of 17 administrative regions in 3 major islands (Luzon, Visayas, Mindanao) consisting of various topographies, which gives rise to several geographically isolated and disadvantaged areas. Governance fragmented into local government units has caused stark socioeconomic disparity and health inequity in that the public sector providing for the underserved is under-resourced whereas the private sector catering to the wealthy is over-resourced [1].
In Southeast Asia, the Philippines has shown the greatest increase in disability-adjusted life-years (DALYs) for neurological diseases over the last two decades [2]. A comparison of DALYs for neurological diseases between 1990 and 2016 showed an 87% increase, which highlights a growing demand for neurologists in the country.
The Philippine Neurological Association (PNA), formed in 1972, is the local authority for the specialty which accredits neurology training programs for both adult and pediatric neurology and board-certifies graduates of these programs. At present, there are 11 accredited training programs for adult neurology residency and 3 for pediatric neurology fellowship. The official PNA website lists five hundred adult and pediatric neurologists in the country [3]. The PNA strives for excellence in the delivery of neurological care, education, and research [3]. The role of the neurologist as a clinician is well-established, however, the role of a researcher remains to be elucidated.
In 2007, BRAIN Inc. compiled neuroscience research studies from 1985 to 2006 in the country in a compendium that included 610 abstracts, including 102 studies that have already been published locally [4]. This, however, was limited in that it only included abstracts, the majority of the submissions were unpublished, and the remaining published studies were in local journals with no automated citation counter.
Research productivity is defined as the number of peer-reviewed articles published and the frequency of citations [5]. Previous studies exploring research productivity for various neurologic diseases have found research disparity between low–middle income countries (LMIC) in comparison to higher-income countries [6]. In terms of research output in Southeast Asia, the Philippines ranks behind Singapore, Malaysia, and Thailand for studies on central nervous system infection, dementia, epilepsy, headache, motor neuron diseases, movement disorders, multiple sclerosis, and neuromyelitis optica, neuro-oncology, and stroke [6,7,8,9,10,11,12,13]. The exception is noted in the case of publications on dystonia, in which the Philippines ranked first [11]. Studies exploring treatment gaps for various neurological diseases in the country have shown a want of health information in the form of research. These studies cite a lack of local epidemiologic data and local experience with diagnosis or treatment for autoimmune encephalitis, bacterial meningitis, brain tumors, epilepsy, multiple sclerosis, Parkinson’s disease, and even stroke [14,15,16,17,18,19]. By further evaluating research performance, we can identify systemic disparities and guide appropriate solutions and direction for further study.
Thus, this study investigated the research output in terms of publications and citations of Filipino adult and child neurologists in the country and the correlation of these bibliometrics to socioeconomic and healthcare indices in the Philippines.

International (Scopus, PUBMED, Google Scholar) and local (Health Research and Development Information Network) electronic medical databases were used to retrieve studies published by Filipino neurologists using the PNA official website as reference. An initial total of 1310 publications were retrieved and extracted from the electronic databases using the following criteria: (a) authored by a Filipino adult or child neurologist (as indexed on the official PNA website as of June 2022); (b) published completed studies until December 2021 of any study design; (c) book chapters in published text; (d) available in full text; (e) published under at least one institution in the Philippines. Additional articles were included from perusing existing local publications and reference lists. An additional search was also completed for neurologists with hyphenated names using both maiden and married names. Deceased Filipino neurologists were sourced from the PNA website and directory and also included in the search. We excluded studies that were authored by PNA neurologists but did not have an affiliation in the Philippines at the time of publication, conference proceedings, letters to the editor or correspondence, editorials or commentaries, and guidelines.
Duplicates were identified and excluded through juxtaposition of study titles, authors, and year of publication. Eligibility was assessed by two reviewers (ADOA and RDGJ) after duplicates were removed. Disagreements were resolved by discussion and consensus. Studies fulfilling the eligibility were included in the quantitative analysis.
Extracted articles were encoded and archived into a Microsoft Excel file including: (a) year of publication, (b) authors, (c) affiliations, (d) journal of publication, (e) 2021 journal impact factor, (f) study design, (g) main topic of research. Citation count of articles on Scholar, CrossRef, Web of Science, Dimensions, and Scopus was manually collected, and the citation count was determined by the highest value. Journal impact factor was determined from SCImago Journal and Country Rank [20].
A list of Filipino adult and child neurologists practicing in the Philippines was compiled using the PNA website. The list was further organized by region of practice and field of practice (adult, child, or both). Region-specific socioeconomic parameters (gross domestic product (GDP), population, health expenditure, number of health establishments, %GDP allocated for research and development (R&D), and number of R&D personnel) were sourced from official government reports under the Philippine Statistics Authority [21,22] and the Compendium of Science and Technology [23]. Health expenditure is determined from health financing revenues using the Philippine National Health Accounts framework. Research expenditure is based on the %GDP allocated for R&D.
Data syntheses were conducted in Microsoft Excel and R version 4.0.3 [24] using descriptive statistics such as frequencies and percentages. Spearman rank-order correlation was used to measure the association between regional socioeconomic indicators and bibliometric indices. p-value was set at 0.05.

A total of 1232 articles were retrieved from an electronic database search and an additional 78 articles were identified from a manual review of locally published journals. We removed 38 duplicate records prior to screening. Screening of 1272 article titles and abstracts yielded 314 studies for exclusion. These included conference proceedings and guidelines. The full text could not be retrieved for 29 articles. The 929 remaining full-text articles were assessed for eligibility. A total of 746 studies were included for quantitative analysis. All retrieved studies were published in the English language (Figure 1).
The 746 studies were published in 245 journals and books from 1966 to 2021, amassing a total of 12,409 citations. Each cited article had an average of 17 and a median of 8 citations (range 0–511). Of the 746 studies, 302 (40.5%) were uncited. The most cited article was a cohort study about juvenile myoclonic epilepsy published in Neurology in 1984, garnering 511 citations [25]. The second most cited article had 408 citations and was a pre-clinical study on botulinum toxin published in Muscle and Nerve in 1996 [26]. The year 2021 saw the greatest number of publications, with 116 new publications indexed that year.

3.2. Proportion of Publications and Citations Per Region

3.3. Publications by Adult and Child Neurologists and Institutions

3.7. Correlation among Bibliometric Indices and Socioeconomic, Health, and Research Parameters

Research productivity in Philippine neurology has shown steady growth in recent years. The research landscape is dominated by studies authored by neurologists belonging to institutions in the NCR, which has the greatest number of neurologists, training institutions, and GDP. Greater research productivity was associated with population, GDP, health expenditure, number of healthcare establishments, neurologists, and research personnel. There is a need to address the disparity seen in more distant regions in order to bridge gaps in healthcare, health human resources, and health information through research.

The raw data supporting the conclusions of this article will be made available by the authors upon reasonable request.

We would like to acknowledge Keith Isaac Apor for his assistance in data collection. 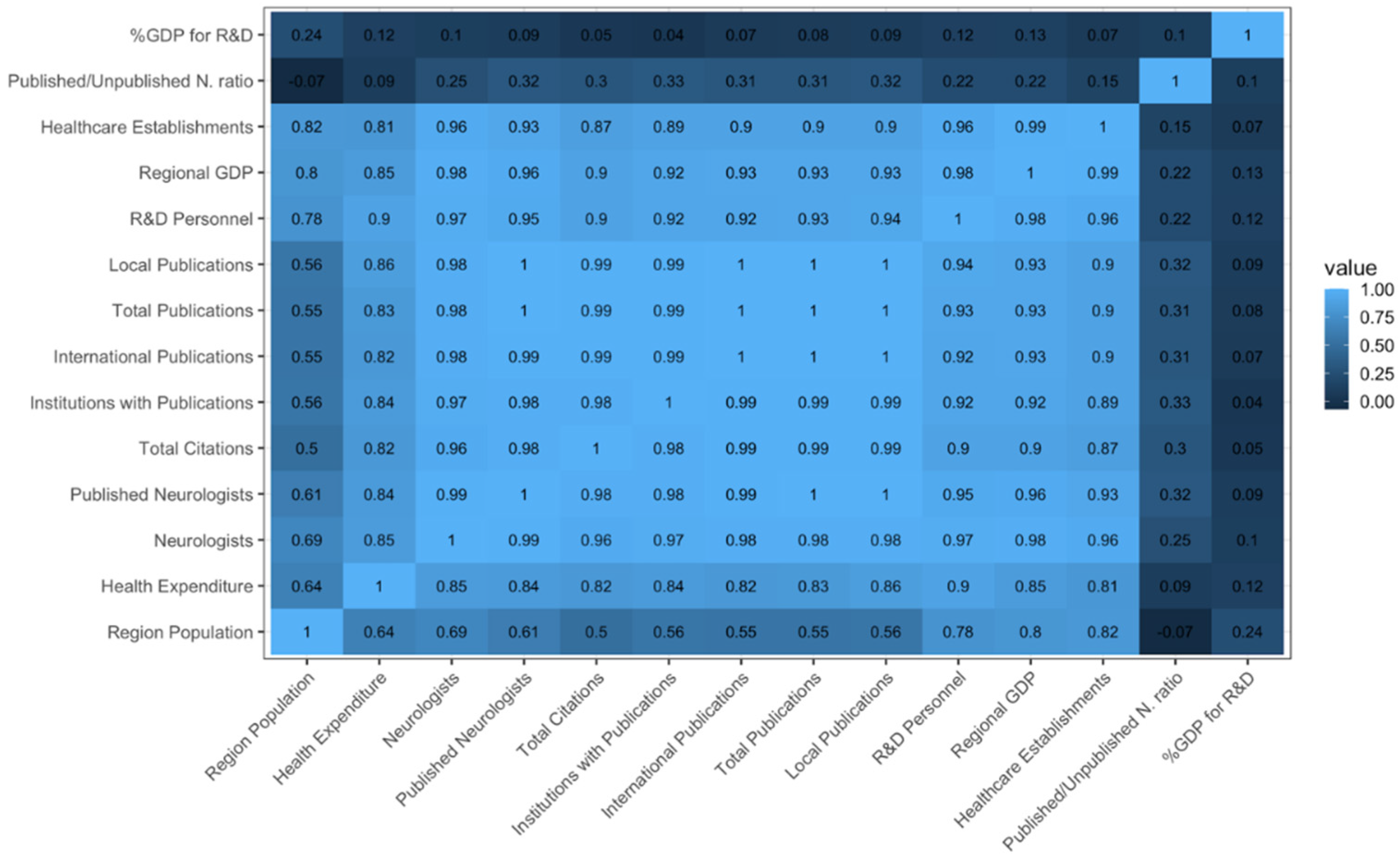