Association between COVID-19 and Sick Leave for Healthcare Workers in a Large Academic Hospital in Southern Italy: An Observational Study
Previous Article in Journal

Understanding the extent of contamination, sources and various carcinogenic and non-carcinogenic risks associated with different heavy metals in soil-crop systems is crucial for the prevention of heavy metal pollution. A survey was undertaken to determine heavy metal concentrations and degree of pollution in soil-crop systems (rice, wheat, and corn) using various indices such as pollution factor (CF), geo-accumulation index (Igeo), enrichment coefficients and transfer coefficient, and to determine the source of heavy metals pollution in the Wanjiang Economic Zone, Anhui Province, China. A total of 308 pairs of soil-crop samples were collected in this study, comprising 245 pairs of soil-rice samples, 53 pairs of soil-wheat samples, and 10 pairs of soil-corn samples. The concentrations of cadmium (Cd) and nickel (Ni) in the soil of the study area exceeded the national limitation of heavy metals in the soil of China (GB 15618-2018, Soil Environmental Quality: Risk Control Standard for Soil Contamination of Agricultural Land. Ministry of Environmental Protection of China. Beijing. China). The concentrations of copper (Cu), zinc (Zn) and lead (Pb) were also above the national limits to a lesser extent. All eight heavy metals (Cd, Cu, Ni, Pb Zn, arsenic (As), chromium (Cr), and mercury (Hg)) exceeded the background values in the study area. The enrichment coefficients of rice, wheat and maize to Cd, Cu and Zn were higher than those to other elements. On the basis of Igeo, it can be indicated that the rhizosphere soil of rice was slightly polluted by Cd and Hg, while the concentrations of the other heavy metals were below the safety limits. The CF and pollution load index (PLI) indicated that the soil in the study area was heavily contaminated with heavy metals. A principal component analysis identified different sources of soil heavy metal pollution, that is, Cu, Pb, Zn and Cd from industrial sources, Cr and Ni from natural sources, and As and Hg from agricultural sources. The carcinogenic risk of heavy metals was related to the intake of crops. Residents in the study area ingest rice, wheat, and corn on a daily basis. On the basis this study, it is suggested that local governments should pay attention to the carcinogenic risk of heavy metals in rice. View Full-Text
Keywords: bi-directional pollution; risk assessment; heavy metals; soil and crops; wanjiang economic zone bi-directional pollution; risk assessment; heavy metals; soil and crops; wanjiang economic zone
►▼ Show Figures 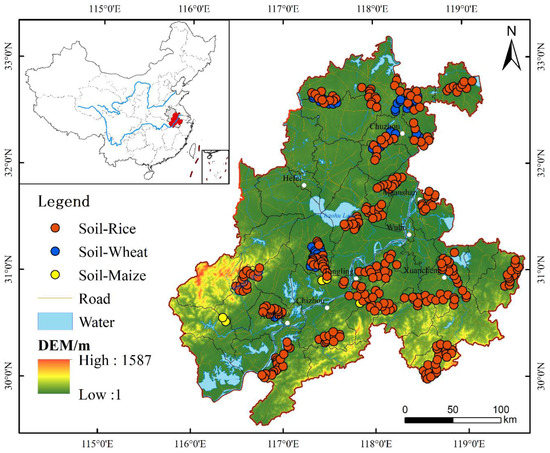