What Is or What Is Not a Risk Factor for Arterial Hypertension? Not Hamlet, but Medical Students Answer That Question
Next Article in Special Issue

Influence of Topographic Factors on the Characteristics of Gully Systems in Mountainous Areas of Ningnan Dry-Hot Valley, SW China
Previous Article in Journal

Outlining the Invisible: Experiences and Perspectives Regarding Concussion Recovery, Return-to-Work, and Resource Gaps

Gully erosion is a common form of soil erosion in dry-hot valleys, and it often brings serious land degradation. A multi-criteria method integrating the characteristics of the longitudinal profile (LP), the cross profile (CP) and the knickpoints of gullies was applied to identify the development stage of gullies in Yuanmou County, Yunnan Province, in southwestern China. Firstly, based on the high-resolution data sources produced by an unmanned aerial vehicle (UAV), 50 gullies were selected as the typical ones in Tutujiliangzi and Shadi village. The LPs were extracted, and their morphological indices, information entropy and fitting functions were calculated. The morphological characteristics of the CPs and the presence or absence of knickpoints were recorded. The results show that the period of the gullies in Tutujiliangzi and Shadi is dominated by the deep incision period and the equilibrium adjustment period, which means that most gullies are in the period of the severe erosion stage. Among the gullies, 13 LPs’ morphological index is between 0.636 and 0.933, and the morphology of the LP presents an upward convex shape; the cross profiles are mainly V-shaped and U-shaped. Thirty-two LPs’ morphological index is between 1.005~2.384, which presents a slightly concave shape; the cross profiles are mainly repeated U-shapes. The remaining five LPs have a morphological index of 0.592, 0.462, 1.061, 1.344 and 0.888, respectively; the LPs of upstream and downstream are different. The LPs of the Tutujiliangzi gullies are nearly straight lines and slightly concave, while those of the Shadi village gullies are convex and nearly straight lines. The knickpoints and step-pools in Shadi village are more developed, while the gullies in Tutujiliangzi develop more rapidly. This study shows that in counties with similar conditions, these conditions such as temperature and precipitation, local topographic changes, soil properties and vegetation conditions have obvious effects on the development of gullies. View Full-Text
Keywords: longitudinal profile; cross profile; gully erosion; gully developmental stage; multi-criteria decision analysis; dry-hot valley longitudinal profile; cross profile; gully erosion; gully developmental stage; multi-criteria decision analysis; dry-hot valley
►▼ Show Figures 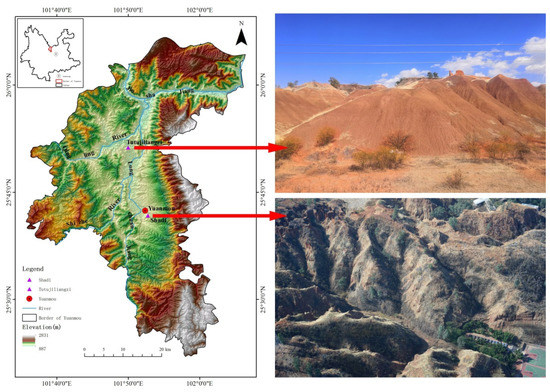