Associations of Urban and Green Land Covers and Heat Waves in 49 U.S. Cities between 1992 and 2019

In this study, the UEII was determined for 27 years. Al-Sharif et al. [35] divided the values of UEII into certain classes. The descriptive statistics (Table 4) and the classification table (Table 5) show that the overall expansion rate of urban areas in the U.S. (mean 1.5%) can be classified as high-speed development every year. The top-five cities with the highest UEII values fall in the category of very high-speed development (Table 6). In terms of the UEII, the city of St. Louis in Missouri ranks first. The other four top cities (Chicago, Hartford, Detroit, and Milwaukee) have almost the same level of urban expansion rate (in percentage) each year. In contrast to the high- to very-high-speed development, New Orleans in Louisiana has developed its urban areas with an average value of 0.2% every year. This might be the strong influence of Ian McHarg’s “Design with Nature” on New Orleans’ urban design and planning [44]. Additionally, Jacksonville, San Francisco, and Norfolk fall into the low-speed development (Table 6) category, whereas the urban expansion rate of Nashville in Tennessee can be classified as medium-speed development, with a value of 0.8%.

There are links between the frequency of extreme heat events and the loss of regional vegetative cover [45]. This study aimed to quantify the correlation by first calculating the GEII for 49 cities across the United States. The descriptive statistics are shown for the 49 U.S. cities, as well as mentioning cities with the highest and lowest GEII values (Table 7 and Table 8).

A study by Gubernot et al. [46] analyzed the heat-related fatality rates from 2000 to 2010. They showed that the rates in Florida, Texas, and California were 0.37, 0.33, and 0.24 per million workers per year, respectively, which are listed among the top ten states. Between 2000 and 2010, Texas and California accounted for nearly a quarter of all heat-related deaths. The highest changes were also seen in the same states, as seen in Table 9.
The Spearman correlation uses the UEII and GEII as dependent variables and frequency change, duration change, season change, and intensity change as the independent variables. The correlation coefficients show the relationship between the variables. The correlation has been done for the whole dataset and within the regions individually (Table 10, Table 11, Table 12 and Table 13). Statistically significant correlations were found between the UEII and duration change, and UEII and intensity change, based on the overall dataset of the U.S. The UEII and intensity change are statistically correlated in the West region.

The UEII method was used to analyze the characteristics of land use morphology [38,47,48]. Shenghe et al. [47] analyzed the urban expansion speed of Beijing in China by using UEII. Hwang et al. [48] used the UEII method to examine the changing urban spatial expansion in the city of Seoul and its vicinity areas in South Korea. They reported that the expansion intensity index of Seoul ranged from 1.95 to 9.13 for the years 1975 and 1995, indicating a very rapid urban spatial expansion. Kang et al. [38] explored urban changes in the Democratic People’s Republic of Korea by using UEII. They calculated the UEII for two 10-year intervals, and the spatial autocorrelation of UEII values was examined for the entirety of North Korea.
The comparison between GEII and UEII clearly shows that the green area is not increasing at the same rate as urban expansion. The mean GEII of 0.017% and the mean UEII of 1.5% indicate that the urban expansion is more evident than green expansion in the 49 cities of the U.S. as an annual average. Maimaitijiang et al. [49] studied the St. Louis metropolitan and observed that the rate of buildup of land expansion was 58.99%, which was 6.1 times faster than the rate of population increase (9.74%). The reason for the rapid urban expansion was assumed to be a social preference for low-density housing, a suburban lifestyle, and a well-developed highway system. In this case, the population increase did not play such a rapid role as it was seen in Xuzhou city [36], because the population in St. Louis declined from 1970 to 2010 by 48.7%. Green areas in the two cities (Tucson and Phoenix) have been increasing from 1992 to 2019 by 1.45 and 1.13%, respectively, as seen in the annual average. Charlotte has the lowest GEII value of −0.9% and a UEII value of 1.62%. The high-speed development might be related to maintaining green areas in the cities. Milwaukee and St Louis have a GEII of −0.2% with a very high value of UEII (2.5 and 3.1% respectively). It will be beneficial to investigate the land use policies of the two cities for a better understanding of the relations between urban and green areas.
Spearman correlation analysis within the 49 cities in the U.S. revealed that the heat wave duration and intensity changes are significantly linked to UEII. Salvati et al. [50] used the correlation method for the evaluation of urban landscape and forest conservation in the outskirts of the city of Rome, Italy. Zambon et al. [51] analyzed multi-core urban developments and their economic growth in Europe using the Spearman analysis method. In this study, duration change was negatively correlated with UEII. It means that the cities expanding every year more rapidly might receive fewer days of the consecutive heat wave. However, UEII was positively and significantly ( = 0.02699) related to heat wave intensity, with the Spearman correlation coefficient of 0.317. These results might be interpreted as follows; First, there is a negative relation between heat wave duration and intensity from the perspective of an urban expansion intensity. Second, heat wave intensity can be a public health issue in high urban expansion intensity areas. A previous study suggests that urban green space decreases the intensity of the heat wave [24]. However, the relationships between GEII and heat wave frequency, duration, season, and intensity were not statistically significant in this study. The green spaces can be further analyzed in this instance. According to Xiao, X. D. et al. [52], large green spaces had a more noticeable and consistent cooling and humidifying effect, but small green spaces had a more variable cooling effect, with a heat preservation phenomenon happening in some circumstances. Also, another study [53] explained that the extent and timing of localized cooling effectiveness, particularly during high-intensity heat waves, is uncertain. Further emphasis on the green space type and shape might give a better explanation for the weak correlation.
The regional effect was negligible in this study. The heatwave characteristics have little correlation to the UEII and GEII regionwide which demands further investigation.
Figure 3 and Figure 4 show the results graphically. Figure 3 shows that there is a negative relation between UEII and duration change values. This can also be verified in Table 3 and Table 5. Chicago and St. Louis have UEII values of 3.1 and 2.5, respectively, which can be considered as being very high-speed developments in the urban areas [35]. Figure 4 shows a similar pattern between UEII and intensity change values. The pattern shows that the value changes are in the positive direction. Philadelphia, Pittsburgh, Salt Lake, Boston, and Cleveland are the top five cities in intensity change (Table 3). The UEII values for these cities range from 1.1–2.2, where only one value (for Boston) falls below the mean UEII value of 1.5. The regions specifically do not exhibit strong correlations. The West region shows a significant and positive correlation only between UEII and intensity change. The coefficient value is 0.64 and the p-value is 0.03. Thus, the higher the UEII value, the higher the intensity of the heat wave. Seattle, Las Vegas, and Fresno have the highest UEII values among the 12 cities of the West region, which are 1.78, 1.75, and 1.71, respectively. The intensity changes for those cities are above the average of 0.62, except for Seattle (0.42).

Cities are increasingly concerned with new difficulties including the detrimental effects of heat waves, as the effects of climate change continue to grow. Further empirical research on urban and green spaces could give urban planners feasible implications for this issue. This paper presents the urban and green area changes using UEII and GEII. The relations of UEII and GEII were examined for the heat wave characteristics including frequency, season, duration, and intensity. It was found that heat wave intensity can be a public health issue in high urban expansion intensity areas. The results imply that the cities would be better in a more compact pattern with more expanded green areas to mitigate the negative health impacts of heat waves on citizens in urban areas. It is noticeable that there are some patterns to be investigated further in the context of urban developments and heat wave characteristics. Though this study has important implications for the public health issue of urban areas, it will be beneficial to use geographically heterogeneous data and sophisticated statistical methodology for an in-depth discussion regarding urban heat wave issues. The land use classification process can be performed by using remote sensing. It can be further cross-referenced with field data. Spearman’s correlation method allows the monotonic association between two variables. Different analytical approaches will be required for us to understand dynamic relations between land uses and heat wave characteristics.

This work was supported by the Ministry of Education of the Republic of Korea and the National Research Foundation of Korea, grant number NRF-2020S1A3A2A01095064.

Some or all data and models that support the findings of this study are available from the corresponding author upon reasonable request. 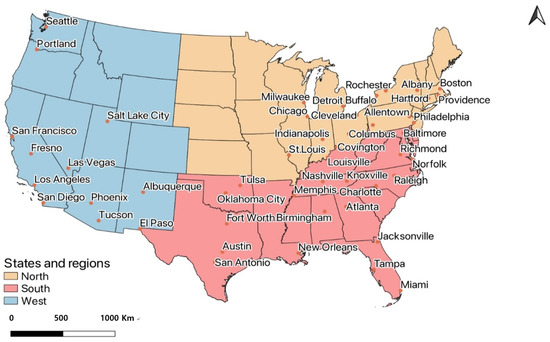 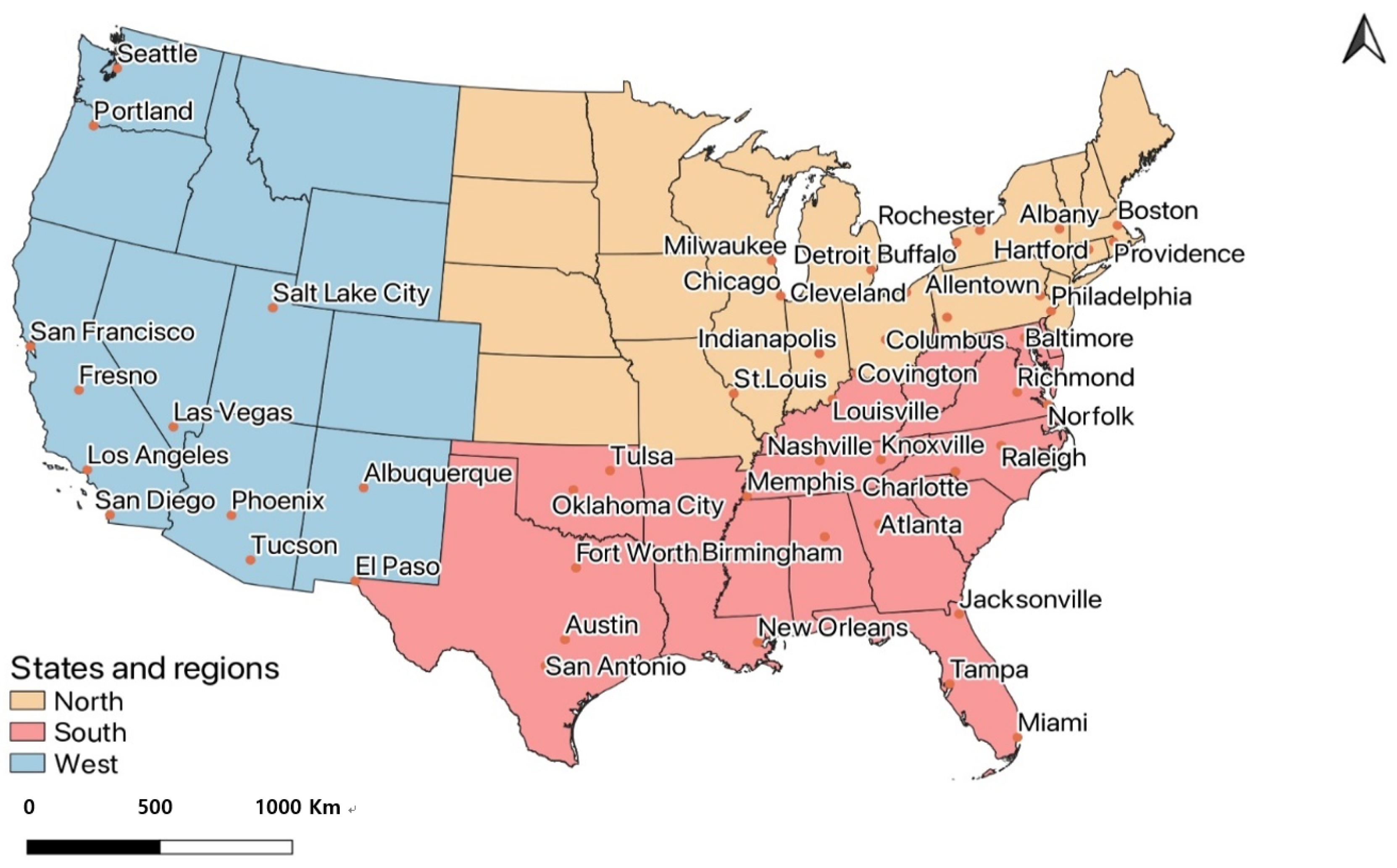 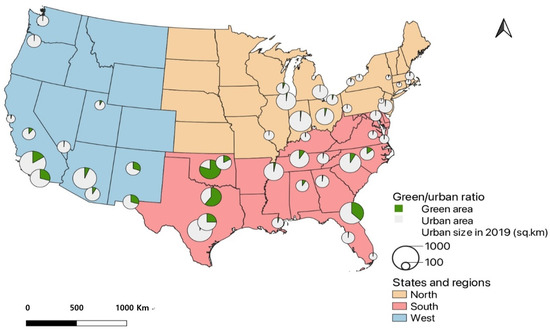 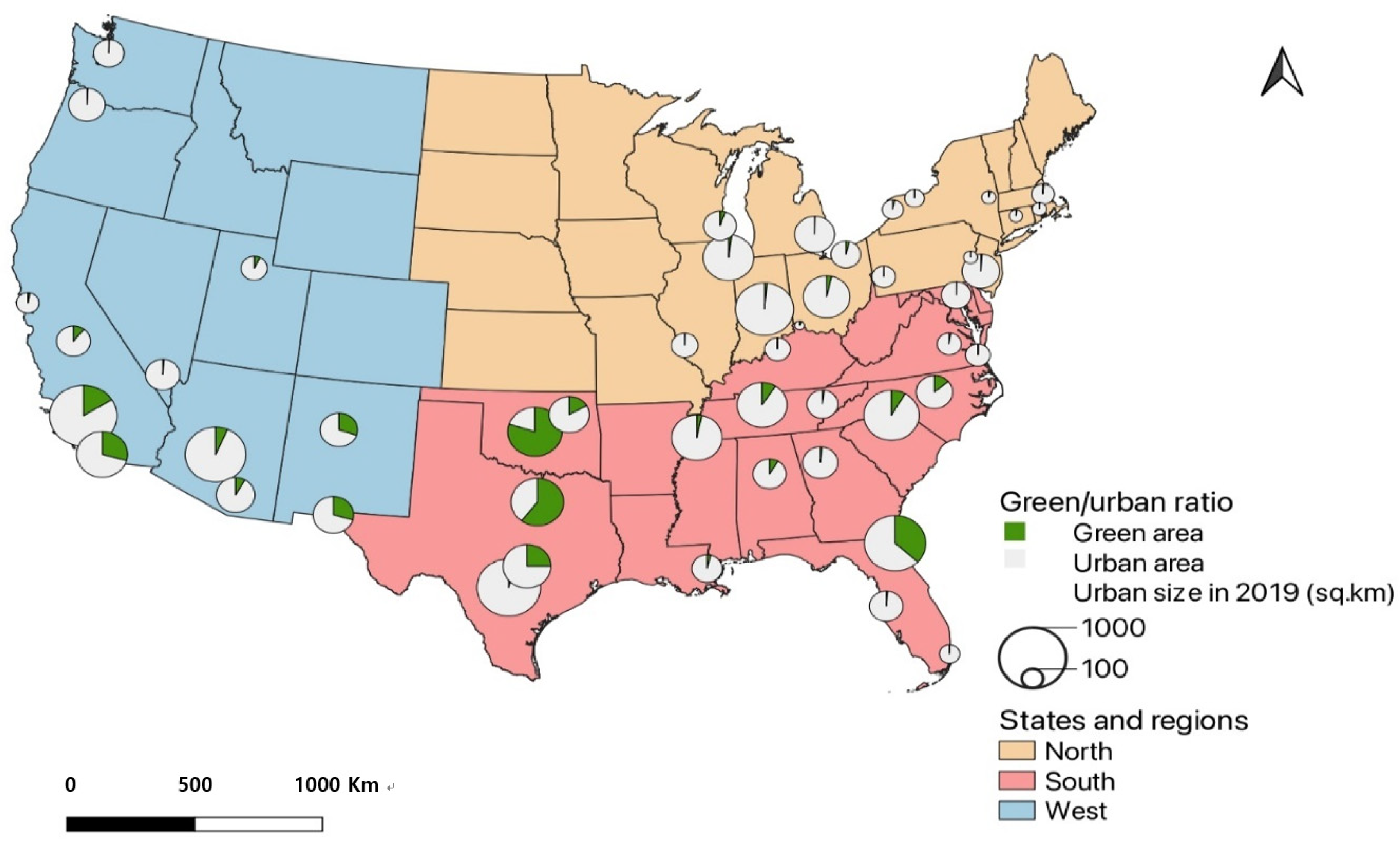