The Impacts of Prenatal Mental Health Issues on Birth Outcomes during the COVID-19 Pandemic: A Scoping Review

The Psychophysiological Profile and Cardiac Autonomic Reactivity in Long-Term Female Yoga Practitioners: A Comparison with Runners and Sedentary Individuals

Yoga practice, a means of stress management, has been reported to optimize psychophysiological health; however, its underlying mechanisms remain unclear. The purpose of the present study was to examine the psychophysiological profile and cardiac autonomic reactivity in long-term yoga practitioners and compare them to runners and sedentary individuals. Psychological health and aerobic fitness level were evaluated using self-reported questionnaires and a 3-min step test. Blood pressure (BP), heart rate (HR), respiration rate (RR), and heart rate variability (HRV) parameters were recorded at rest, as well as during and following psychological stress, which was elicited by the Stroop color and word test and the mental arithmetic task. The yoga group demonstrated a lower RR (10.35 ± 2.13 bpm) as compared to the other two groups, and a lower HR (66.60 ± 7.55 bpm) and diastolic BP (67.75 ± 8.38 mmHg) at rest when compared to the sedentary group (all p < 0.05). HRV parameters following mental stress returned to the baseline in yoga and running groups, but not in the sedentary group. The anxiety level in the running group was significantly lower than that in the sedentary group (p < 0.05). These findings suggested that yoga practitioners may have a greater homeostatic capacity and autonomic resilience than do sedentary individuals. View Full-Text
Keywords: yoga; running; heart rate variability; cardiovascular reactivity; stress response yoga; running; heart rate variability; cardiovascular reactivity; stress response
►▼ Show Figures 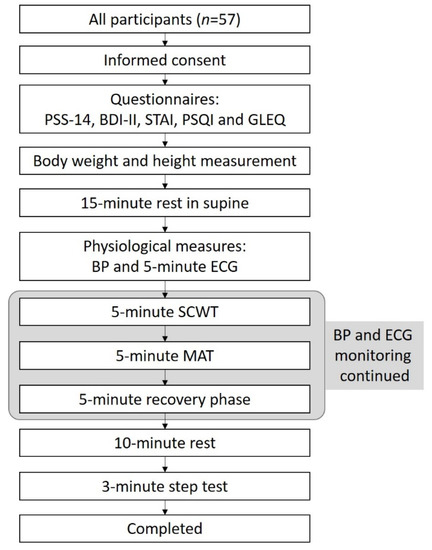