Environmental exposures can have adverse effects on a woman’s reproductive health [1,2,3]. Female firefighters have a variety of environmental and occupational exposures that can negatively impact their reproductive health by increasing their risk of miscarriage and pre-term birth, as well as increasing their use of fertility drugs [4,5,6,7,8,9,10,11].
Anti-müllerian hormone (AMH) is secreted by the granulosa cells of follicles and plays a role in follicular development [12]. AMH gradually increases until puberty and then generally plateaus until around age 25 [13]. After this, as a woman ages, her AMH steadily declines to mirror the decline in number of oocytes [14,15]. AMH is used as a clinical marker of ovarian reserve and is often used as a marker of responsiveness to fertility treatment [12]. However, AMH is a novel biological marker, so few studies have measured AMH on a population level [16]. AMH may be useful in measuring the effects of exposures that target the ovary, and reduction in AMH levels have been associated with inhaled environmental exposures including smoking, burning fuel indoors for cooking or heating, and the indoor spraying of pesticides for malaria control [17,18,19], and may be useful in measuring the effect of exposures that target the ovary [16]. Prior research in mice has shown that benzo[a]pyrene, a polycyclic aromatic hydrocarbon (PAH) [20], and PM2.5 exposure [21] were associated with decreased AMH. However, additional research is needed to better understand the influence of environmental and occupational exposures on AMH in human populations.
Firefighters are exposed to a number of occupational hazards that can poorly impact their health [22,23,24,25,26]. Therefore, the objective of this study was to investigate whether AMH levels were lower in female firefighters compared to civilian non-firefighting women and to investigate whether among female firefighters, there was a dose-dependent relationship between years of firefighting and AMH levels.

Firefighter participants were primarily recruited from The Health and Wellness of Women Firefighters Study (HWWFS), an ongoing cohort study of female firefighters over the age of 18 in the United States and Canada [27]. The purpose of the HWWFS is to investigate the work environment, health, and perceived experiences of women firefighters in the fire service. The HWWFS recruited initial participants through multiple affinity group email lists that have been previously used, as well as snowball sampling, which allows current participants to recruit additional participants [4]. In addition, a small number of firefighters expressed interest in participating in our study after learning about it through an occupational health conference on women in the fire service and were invited to participate. Firefighters were asked to recruit one or more friends or relatives to serve as the comparison group. Participants received a USD 5 gift card incentive for their participation. All protocols and communications with research participants were pre-approved by the Institutional Review Board of the University of Arizona (Protocol #2007816290, Approved 29 June 2020).
All participants were asked to respond to an online survey regarding their occupational and health history. Women were excluded from the analyses if they had a history of chemotherapy or radiation, were current cigarette smokers, or had an oophorectomy (Figure 1; n = 19), as these have been shown to affect AMH levels [17,28,29]. We also excluded participants (n = 81) who did not provide a dried blood spot sample, had missing information on firefighting status, and one duplicate response. Lastly, we excluded participants who did not supply enough blood for measurement (n = 13). Participants with history of certain autoimmune diseases (polyglandular syndrome, lymphocytic oophoritis, Addison’s disease, Hashimoto thyroiditis, or Celiac disease) were also excluded (n = 3) as these conditions can diminish ovarian reserve [30,31,32,33,34,35].

The primary exposure of interest was history of firefighting based on self-report. Among current and past firefighters, we also investigated occupational exposures. Years in the fire service and the number of live fires responded to in a typical month were treated as continuous variables. Poor fit of personal protective equipment (PPE) was a binary variable defined as a Likert Scale Score less than 3 on a scale of 1 = “Does not fit” to 5 = “Fits very well” for any PPE category (Firefighting turnout coat/pants; Firefighting boots; Self-contained breathing apparatus (SCBA); Firefighting helmet; Firefighting hood (standard); Firefighting hood (vapor); Firefighting gloves; Work gloves; Eye/face protection other than SCBA face piece). The same method was used to create a variable for poor fit of SCBA.

All participants received an AMH testing kit (Ansh Labs, Webster, TX, USA) to collect dried blood spots (DBS). The collection of the DBS required the participants to prick their fingers using lancets and provide five DBS for measurement. After collection, the dried blood spots were returned to the University of Arizona and stored at −20 °C until all samples were collected. Once all samples were collected, they were sent to Ansh Labs/Motive Biosciences Inc. (Webster, TX, USA) to assay AMH using the picoAMH ELISA [36]. Motive Biosciences reported a coefficient of variation of 9.4–9.5% for this analysis. Participants were given the option to receive the results of their AMH assay.
AMH (ng/mL) was log-transformed for all analyses to account for its non-normal distribution. Log-transformed AMH (ng/mL) was analyzed as a continuous variable. AMH values below the limit of detection (LOD) (0.03 ng/mL) were recoded as 0.03/sqrt(2). AMH values above the upper limit of quantification (ULOQ) (>17.3 ng/mL) were recoded as 17.3 ng/mL.

Information on age, race (White, Non-White), ethnicity (Yes: Hispanic, Latina, or Spanish origin; or No), annual household income (less than USD 25,000; USD 25,000–50,000; USD 50,001–75,000; USD 75,001–100,000; or more than USD 100,000), highest educational attainment (high school graduate or GED; some college or technical school; college graduate; or advanced degree), marital status (Married; In a registered domestic partnership or civil union; Separated; Never married; or Divorced), and age at menarche (≤11; 12; 13; ≥14) were based on self-reported data at enrollment into our sub-study. Participants were asked about their typical level of exercise. Exercise habits ranged from 1 to 5 (1 indicating sedentary activity and 5 indicating very strenuous exercise). Current exercise habits were calculated using the level of exercise they indicated for their current age group. To determine the burden of infertility, participants were asked if they ever tried to become pregnant for more than one year without success. Participants also reported if they ever received fertility treatment. Information on other reproductive conditions was also collected, such as endometriosis (Yes, laparoscopically confirmed; Yes, not laparoscopically confirmed; No), history of hormonal contraceptive use (ever and current), and current contraceptive method (Surgery (sterilization), birth control pill (oral contraceptives), male condom, other hormonal methods (implant, injectable, contraceptive patch, contraceptive ring), intrauterine device (IUD), periodic abstinence, other, none of the above). Hormonal contraceptive use was analyzed categorically (birth control pill; other hormonal methods; or neither). Body mass index (BMI) was calculated based on self-reported height and weight and converted to kg/m2. BMI was reported as a continuous variable and categorized (BMI < 18.5; 18.5 ≤ BMI < 25; 25 ≤ BMI < 30; BMI ≥ 30). History of other autoimmune diseases was self-reported as a categorical variable. Perceived stress was measured using the 10 Question Perceived Stress Scale (PSS-10), with a higher score indicating a higher perceived stress level [37]. Participants also reported the number of known pregnancies they have had, including both miscarriages and births, as well as the number of biological children they have. Two participants reported having 14 biological children despite only having four pregnancies, so we chose to omit these two responses from the number of biological children.

T-tests were performed using the Satterthwaite method to produce p-values for continuous variables in in Table 1 and Chi-Squared tests were performed for categorical variables. Frequencies < 5 were suppressed in Table 1 and Table 2 to ensure participant privacy.
Linear regression models were utilized to estimate the association between firefighting status, firefighting exposures, and continuous, log transformed AMH. All models were adjusted for age and age2, to account for a non-linear association between age and AMH, and BMI. These confounding factors were determined based on a priori associations in the published literature. Percent changes in AMH between exposure groups were calculated from the estimated regression coefficients (β) as ([exp(β) − 1] ×100) and presented with corresponding 95% confidence intervals (CIs) (Table 3). We also investigated effect modification by age, by stratifying results by age group (<32, 32–37, and 38+) and conducted likelihood ratio tests comparing a model with an interaction term between age categories and exposure and a model without.
We restricted our analyses to non-smokers, as lowered AMH has been associated with smoking [3,18]. As women with polycystic ovary syndrome (PCOS) are known to have higher age-standardized AMH levels [38,39], in sensitivity analyses we excluded participants with probable PCOS (n = 20), defined as either having self-reported PCOS and/or an AMH value above 10 ng/mL [40].

This research was funded by the Southwest Environmental Health Sciences Center (SWEHSC), Grant Number P30 ES006694. SWEHSC is a Unit of the Center for Toxicology at the University of Arizona College of Pharmacy, funded by the National Institute of Environmental Health Sciences. This research was also funded in part by the Federal Emergency Management Agency (FEMA), Grant Number EMW-2019-FP-00526.

The study was conducted according to the guidelines of the Declaration of Helsinki and approved by the Institutional Review Board of the University of Arizona (Protocol #2007816290, Approved 29 June 2020). 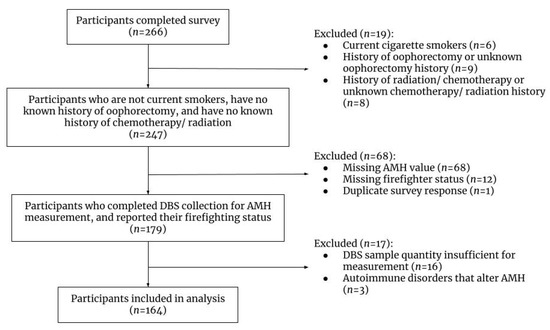 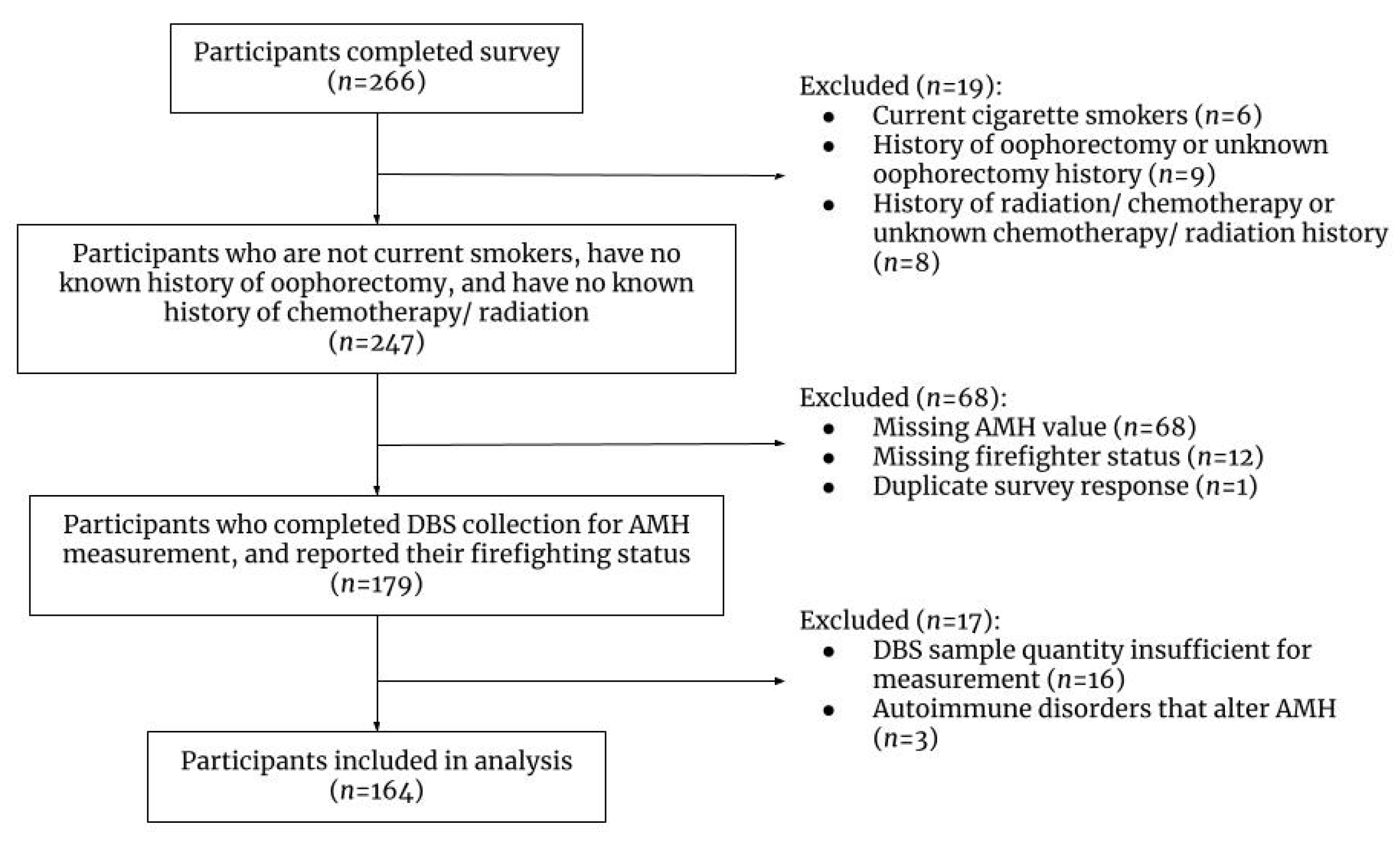