Impact of Individual, Familial and Parental Factors on Adolescent Smoking in Turkey

Social Anxiety, Cannabis Use Motives, and Social Context’s Impact on Willingness to Use Cannabis

The final sample for this study was 124 young adults (20–25 years old). Inclusion criteria included: being 18–25 years of age, being a U.S. resident, lifetime cannabis use, and scoring below the clinical cutoff of 12 on the CUDIT-R [28]. In order for participants’ data to be used in the analytic sample, they were required to complete 50% or more of the survey, score at least 80% on our attention checks, and provide a valid email address (for compensation purposes). The most common reasons for being excluded were failing the attention checks (n = 145) and exceeding the CUDIT-R cutoff (n = 221). Excluding those scoring above CUDIT-R cutoffs from the protocol provided ethical control to individuals with potential cannabis use disorders, by protecting them from exposure to substance-related cues when the investigators were unable to assess cravings in real time online, which is standard protocol when conducting these procedures within the laboratory [20,22].

The Cannabis Use Disorders Identification Test-Revised (CUDIT-R) [29], based upon the AUDIT [23], screened for possible cannabis use disorders (DSM-IV). This 9-item measure identifies if individuals have cannabis use problems, based on the past 6 months, with a maximum total score of 32. The cutoff for a cannabis use disorder is a score of 12. The sensitivity and specificity were 73% and 95%, respectively, for current cannabis use disorder [28]. The categories within the measure are based on consumption, cannabis problems (abuse), dependence, and psychological features. Cronbach’s alpha in this sample was 0.84.

The Cannabis Simulation Intoxication Digital Elicitation (Can-SIDE) audio simulation examines willingness to accept peer offers to smoke cannabis under laboratory conditions, as smoking cannabis is the most frequent form of administration in the U.S. [30]. This simulation was tailored to young adults and consisted of five scenes presenting different use contexts (playing cards with two friends, small party, large party, watching sports with friends, and pre-loading (use before attending another event)). Participants listened to the simulation on a computer or smartphone with headphones and received cannabis offers or control offers (food or non-alcoholic beverages) during each of the five social situations. The participants were asked to pretend the actors in the scene were their friends, and after each offer, indicate their willingness to accept on a scale of 1 to 7, with higher scores indicating greater willingness. The simulation lasted about 30 min. To score this measure, the cannabis and control items were averaged separately for each of the five use contexts, and totals for both cannabis (α = 0.93) and control items (α = 0.86) were calculated to determine overall behavioral willingness (BW).

2.2.6. Daily Sessions, Frequency, Age of Onset, and Quantity of Cannabis Use Inventory

The Social Interaction Anxiety Scale (SIAS) [32] assessed social anxiety. This 20-item self-report scale measures distress when meeting and talking with others and is used in clinical and research settings on a scale of 0 to 4. Items are summed to produce a total measure score out of 80; a score of 43 or more indicates traditional social anxiety. This measure showed good reliability in this sample (α = 0.88).

All study procedures were evaluated by the Reed College Institutional Review Board. Participants were recruited via Craigslist in two major metropolitan areas in the Pacific Northwestern United States and participated via Qualtrics. The survey began by screening for lifetime cannabis use, followed by the CUDIT-R, next showing the Can-SIDE with scenarios in randomized order, and finishing with the self-report survey measures in randomized order. We compensated participants with a $10 Amazon gift card if they met all inclusion criteria.

All analyses were conducted in Stata 16.0 (Stata LLC, 2020). We used multiple imputation to account for the 4% of missing data on the variables of interest, considered missing completely at random. Estimates were aggregated across M = 500 replications of the dataset using chained equations (mi estimate: regress). We examined model stability using Monte Carlo error estimates (mcerror), demonstrating that 500 replications were sufficient. When interactions were statistically significant, we estimated the significance of the simple slopes using the mimrgns command. Using the Johnson–Neyman method [33], we plotted the regions of significance in Excel for the statistically significant interactions to better describe the conditional effects of social anxiety on BW as a function of motive type. Bonferroni corrected p-values accounted for familywise error rate tests in the analysis.

As shown in Table 1, the sample was between the ages of 20–25 (despite seeking/inviting 18–25-year-old adults), mostly white, and predominantly identified as male. The participants’ highest level of education was a graduate degree and about a third of the sample had a bachelor’s degree. The vast majority of the participants were not college students. A subset of the sample reported a diagnosis of social anxiety disorder (11.29%). Based on the inclusion criteria, the sample CUDIT-R score was below the cutoff for potential cannabis use disorders (48% of all potential participants screened for the study were excluded for reporting a score of 12 or higher). While below the clinical cutoff for social anxiety on average, our sample reported greater social anxiety (M = 34.52, SD = 11.38) than another community sample of 18–30-year-old adults (n = 286; M = 18.40, SD = 11.46), t(117) = 15.38, p < 0.00001, but below that of the clinical sample (n = 132; M = 43.93, SD = 11.84), t(117) = −8.99, p < 0.00001, as reported by Rodebaugh et al. [34]. The mean BW for cannabis was slightly above the midpoint of the scale (out of 7) (M = 4.24, SD = 1.07).
To validate the Can-SIDE in this sample, we correlated BW for cannabis with the quantity and frequency of cannabis use on the DFAQ, applying a Bonferroni corrected p value of 0.005. BW for cannabis in scenes 1 (card game), 2 (small party), 3 (large party), and 5 (pre-loading) was positively correlated with recent cannabis quantity, r = 0.26–0.56, p = 0.004–0.0001; scene 4 (watching sports on tv) did not correlate with cannabis quantity. However, BW for cannabis ratings for all scenes positively correlated with cannabis frequency, r = 0.27 to 0.42, p = 0.004 to <0.00001. At the bivariate level, SIAS positively correlated with conformity motives only, r = 0.25, p = 0.009 (Bonferroni p = 0.01), partially supporting our hypotheses.
To test moderation, we examined the interaction of SIAS and each motive separately in the prediction of BW for cannabis for each scene with demographic covariates and BW for control offers as covariates (Table 2 and Table 3). Bonferroni corrected p-values indicated that all regressions were statistically significant (p < 0.002). Given the primary effect of interest was the interaction term, we have only provided specific results for models with a significant interaction effect. Across the set of mi regressions, demographic covariates varied in their impact on BW for cannabis. Most frequently, racially minoritized groups had lower BW, and college students had higher BW for cannabis; while not statistically significant in all models, Latinx identity was most commonly associated with lower BW for cannabis if it was statistically significant (all estimates available upon request). BW control was a strong and positive predictor of BW for cannabis across regressions as expected and adequately served as a control for response styles within participants.
Contrary to hypothesis, the main effect of SIAS was not a statistically significant predictor of BW for cannabis across scenes (tested independently and with the moderator). However, conformity motives, social motives, and expansion motives moderated the impact of social anxiety on BW for cannabis in the scene with two friends playing cards (Table 2), while coping and enhancement motives did not. Examination of the regions of influence suggested that social anxiety stopped demonstrating a unique effect on BW at greater than average levels of conformity motives. An almost identical pattern was found for social and expansion motives, whereby SIAS only demonstrated significant negative effects on BW for cannabis with below average levels of motives to use (Figure 1). As shown in Table 3, a similar pattern emerged such that SIAS had an inhibiting effect on BW for cannabis in the small party scene (five actors) when expansion motives were low, but had no impact when motives were at or above average. In the pre-loading scene (four actors), SIAS’ moderating effect only limited BW for cannabis when social motives were well below average.

These results show that coping-motivated use was not commonly endorsed in this sample of subclinical cannabis users. It is likely that coping-motivated use is more associated with problem use, and therefore, represents a useful target for treatment-focused interventions. The present findings, however, suggest that other motives and the context of use are likely to be more appropriate targets for prevention and harm-minimization efforts in subclinical cannabis users. Like most samples of youth, our sample highly endorsed motives to use for fun, enjoyment (enhancement), and being with friends (social). Prevention efforts should address these motives directly, particularly as it relates to potentially high-risk cannabis use contexts. Given the focus on coping-motivated use in many prevention programs, addressing cannabis use in convivial situations with friends is also needed.
In the future, research on social anxiety, cannabis use motives, and BW could include participants with cannabis use disorder (adopting existing ethical approaches to mitigate their craving in the lab) to directly compare patterns among different levels of use. Data analysis that includes the full spectrum of users might reveal more information about motives, outside of those related to conformity. Future research should include participant interviews to explore differences in motives and willingness across scenes. More research in subclinical populations may point to possible explanations for how social anxiety is associated with willingness to use cannabis, including greater understanding of protective pathways, and provide guidance for the development of more effective treatment and prevention for young adults.

This research was funded by the John Leonard Adams Fellowship for Collaborative Research in Psychology at Reed College (2020).

The study was conducted according to the guidelines of the American Psychological Association Ethics Code and approved by the Institutional Review Board of Reed College (2020-S21; 3 May 2020).

The data can be accessed at https://www.reed.edu/psychology/ahrp/ (accessed on 12 March 2021). 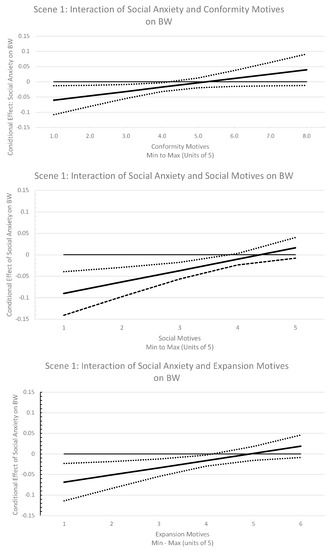 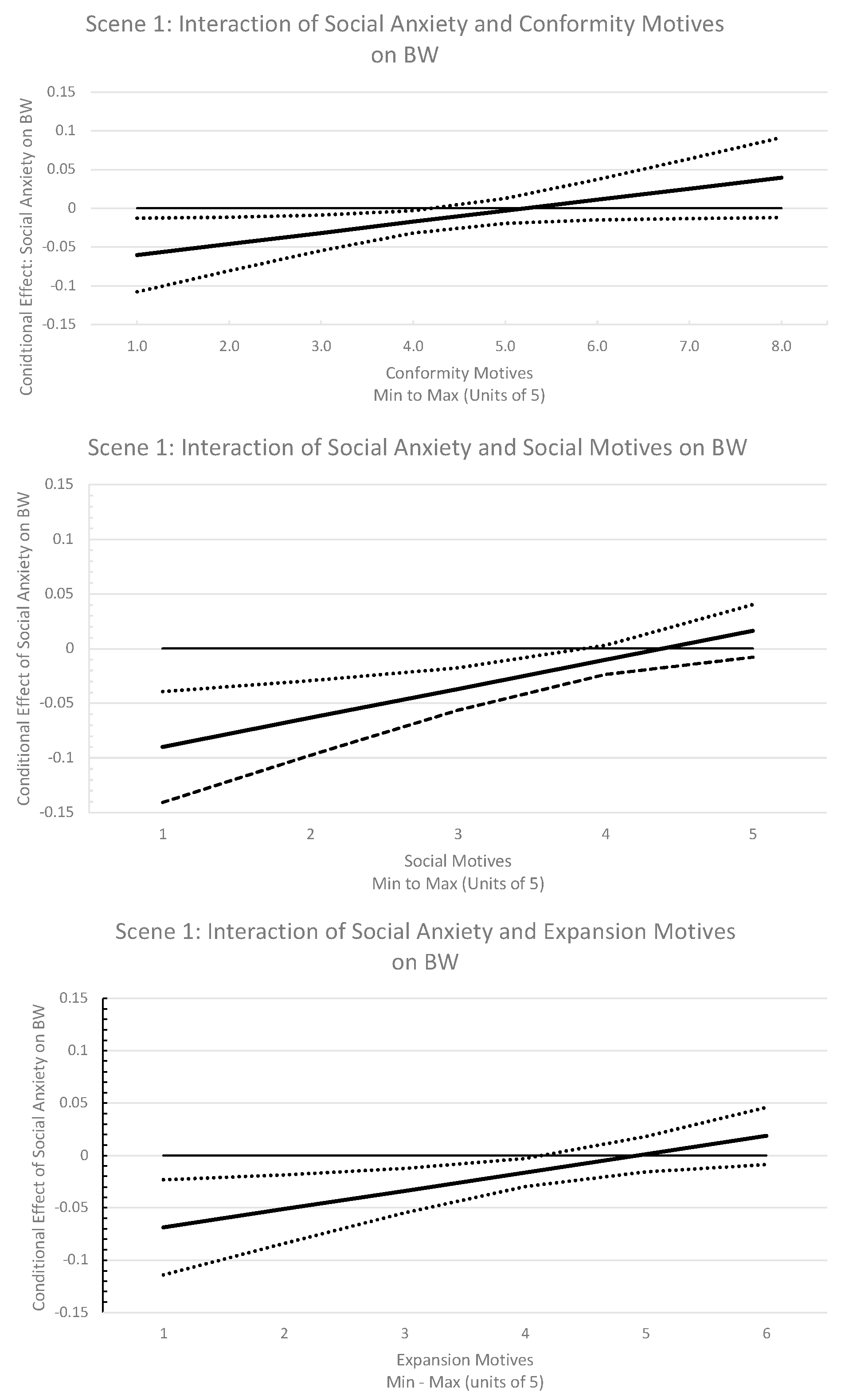