As the ethnic composition around the world is becoming more diverse, the need to produce vital statistics for ethnically mixed populations is continuously increasing. Our aim is to provide the first life expectancy estimates for individuals with uniform Finnish, uniform Swedish, and mixed Finnish-Swedish backgrounds, based on individuals in the native population of Finland who can be linked to both their parents. Life expectancy at birth in the period 2005–2015 was calculated from population and mortality numbers at the one-year level based on each person’s sex, year of birth, and the unique ethnolinguistic affiliation of the index person and each parent. Swedish-registered individuals with Swedish-registered parents had the longest life expectancy at birth, or 85.68 years (95% CI: 85.60–85.77) for females and 81.36 for males (95% CI: 81.30–81.42), as compared to 84.76 years (95% CI: 84.72–84.79) and 78.89 years (95% CI: 78.86–78.92) for Finnish-registered females and males with Finnish-registered parents. Persons with mixed backgrounds were found in between those with uniform Finnish and uniform Swedish backgrounds. An individual’s own ethnolinguistic affiliation is nevertheless more important for longevity than parental affiliation. Similar register-based analyses for other countries with mixed populations would be useful. View Full-Text
Keywords: life expectancy; ethnicity; mixed heritage; population registers; native groups; Finland life expectancy; ethnicity; mixed heritage; population registers; native groups; Finland
►▼ Show Figures 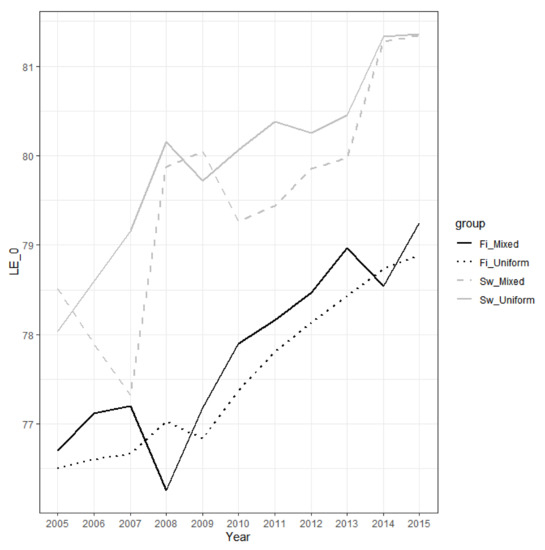 Jan Saarela
Jan Saarela has worked extensively with register-based data of longitudinal and multigenerational character, studying different aspects of mortality, migration and the family in both Finland and Sweden. A particular group in focus has been the Swedish-speaking population in Finland. He received his doctoral degree in Economics in 2003 and was appointed associate professor of Population Economics in 2004, senior lecturer of Social Policy in 2006, professor of Ethnic Relations at the University of Helsinki in 2012, and professor of Demography with Statistics at Åbo Akademi University in 2018.
Zoom | Orient | As Lines | As Sticks | As Cartoon | As Surface | Previous Scene | Next Scene
We use cookies on our website to ensure you get the best experience. Read more about our cookies here.
Accept
We have just recently launched a new version of our website. Help us to further improve by taking part in this short 5 minute survey here. here.
Never show this again