Psychological Adjustment of Children and Adolescents with 22q11.2 Deletion Syndrome and Their Mothers’ Stress and Coping—A Longitudinal Study
Previous Article in Journal

To better understand the role of PD in MDRs [2,3,4], this study used a national sample to compare African American and non-Hispanic White men for the associations of education attainment and household income with PD. We hypothesized inverse associations between educational attainment and income with PD for non-Hispanic White men but not for African American men.

The NSAL administered a structured interview in English. About 82% of total interviews were face-to-face, while the remaining 14% were conducted over the telephone. Computer-assisted personal interview (CAPI) methods were used. These methods enhance data quality in long and complex surveys such as the NSAL due to its complex skip patterns. Interviews averaged 140 min in length. The response rate was 71% for African American and 70% for non-Hispanic White respondents.

For the current study, we used the following variables from the NSAL:

Household income was assessed using self-report. Annual household income was collected as a continuous measure, which had a normal distribution. We used quartiles for the total sample, regardless of race/ethnicity, rather than race/ethnic-specific income thresholds, so similar to education attainment, income levels were comparable across race/ethnic groups. The thresholds were as bellow: 15,000 (1.4–1.5) for the 1st quantile, 28,000 (27,500–29,000) for the 2nd quantile (50th percentile), and 47,000 (45,000–48,000) for the 3rd quantile (75th percentile). We included three dummy variables for data analysis with missing category being the lowest income level. For sensitivity analysis, we used income as a continuous measure.

PD was measured using David Williams’ Everyday Discrimination Scale (EDS) [18]. This scale uses ten items to assess routine, chronic, daily, and less overt discriminatory experiences over the past year [19]. Sample items include “In your day-to-day, life how often have any of the following things happened to you?” Sample items include: “being followed around in stores”, “people acting as if they think you are dishonest”, “receiving poorer service than other people at restaurants”, and “being called names or insulted”. Responses are given on a Likert scale ranging from 1 (“never”) to 6 (“almost every day”). For the 10 items, we calculated a summary score ranging from 0 to 50; a higher score reflects more frequent experiences with discriminatory events over the past year (Cronbach’s α in this study = 0.86).

We used Stata 16.0 to analyze the data taking into account the complex sampling design and study weights. As a result, analytic inferences and rates are generalizable to the US population of similar adult men. To prepare for linear regression analyses, we first evaluated possible multicollinearity between educational attainment and household income particularly among the Non-Hispanic White sample where education and income are likely to have a stronger correlation. We also tested the assumption of linearity of the distribution of residuals (errors) before we fit our linear regression models. In all the models that we estimated, educational attainment (three dummy variables) and household income (three dummy variables) were the main independent variables, perceived (daily) discrimination was the dependent variable, and age, marital status, employment status, and household size were the covariates. We decided to control for these variables because African American men are more likely to be unemployed, be unmarried, and live with a higher number of individuals in the household.
We first report results of descriptive analyses comparing males by race. For these comparisons, we used unadjusted regression analysis, which is more robust than t test to unequal variance (due to imbalanced sample size across racial groups). Next, we estimated linear regressions regressing PD on our two major SES predictors, educational attainment, and household income, treated as dummy variables, while controlling for confounding due to age, marital status, employment status, and household size. We did this in 4 steps. First, we used the pooled sample to estimate a regression model predicting PD reports using main effects of race, educational attainment, household income, and covariates but no interaction terms (Model 1). Next, we added interactions to our regression model: educational attainment × race and household income × race/ethnicity (Model 2). We then estimated similar stratified models for African American (Model 3) and Non-Hispanic White (Model 4) men separately. For sensitivity analyses, we treated educational attainment and household income as interval variables. As the results lead to identical inferences, we did not report the results of replication here; however, they are available from the authors. We reported regression coefficients (b), their standard errors (SEs), associated 95% confidence intervals (CIs), and p-values. A p-value of less than 0.05 was considered significant.

In Table 2, we summarize the results of two linear regressions with PD as the outcome. Results from Model 1 indicated that being African American as opposed to being Non-Hispanic White, being younger, and reporting lower levels of household income were associated with higher level of PD. Educational attainment, however, was not associated with PD.
When interaction terms were added to the model (Model 2), the main effect of race/ethnicity attenuated with the variance of the effect being reflected in the interaction terms between race/ethnicity and household income. Comparisons of estimate means that higher income has a larger protective (inverse) effect on PD for Non-Hispanic White men than African American men.

Our findings should be interpreted in the context of some study limitations. First, the cross-sectional design of our study does not imply causation but association. While SES may affect PD, it is also possible that factors that interfere with upward social mobility also affect perception or experience of discrimination. Second, this study did not distinguish type and source of discrimination. Discrimination due to race, SES, gender, and age may have differential effects. Third, the current study could not control all potential confounders. Our study was not able to speak to the experiences of very high-income level individuals/households because they were not captured in the National Survey of American Life. Fourth, this study used household rather than personal income. While the unit of analysis in this study was household rather than the individual, household income may better reflect all the resources that a person has to bring to bear in their social position.

Focusing the research agenda to answer the many unanswered research questions raised in our study would enhance efforts to better identify and address the unique ways that African American men face higher levels of negative mental and physical health outcomes in the United States. Our results showed that social patterning of PD based on household income differs for African American men from that of Non-Hispanic White men. That is, race/ethnicity and income have nonlinear and intersectional effects on the distribution of PD, with higher-income African American men not having equal uplifting of their disadvantage in ways Non-Hispanic White men benefit from income and education Our findings may potentially explain why African American men do not gain much physical and mental health protection against negative health outcomes in the face of increasing attainment of income and education. In the United States, where the ideology of individualism is prevalent, it is believed that hard work in the face of opportunity can facilitate an individual reaching the American dream. It is believed that through the attainment of higher levels of income and educational attainment, greater relief will be found against being treated differently, badly, or unfairly [34]. This belief carries with it the idea that pathways to achievement can be accomplished regardless of race, class, gender, age, or national origin [34]. Results of our study show that this is clearly not the case for many African American men. It is therefore important to acknowledge that the path to reducing health disparities for African American men cannot be only through individual economic or behavioral changes alone but must address the subtle and not so subtle ways in which structural barriers limit and bound the benefits of African American men’s economic achievements. African American men’s dreams deferred is an experience that should be examined relative to their poor physical and mental health outcomes [35].

The University of Michigan (UM) Institute Review Board (IRB) approved the NSAL study protocol. However, the data in this manuscript was exempt from IRB.

Written informed consent was received from all the participants. Respondents received financial compensation for their time.

This data is available through the University of Michigan ICPSR. 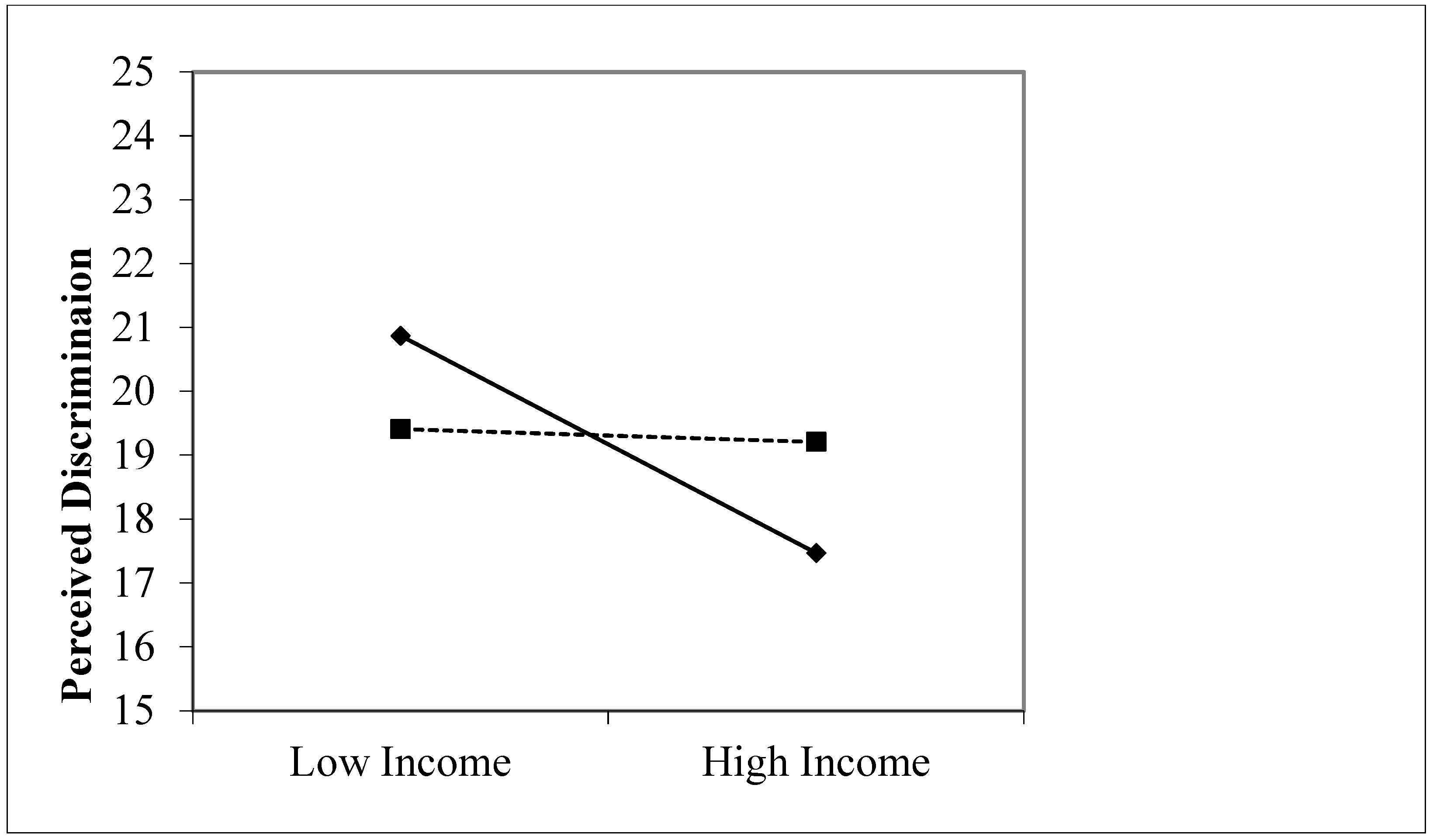