A Multimodal Intervention for Prevention of Overweight and Obesity in Schoolchildren. A Protocol Study “PREVIENE-CÁDIZ”

A Pandemic within the Pandemic? Physical Activity Levels Substantially Decreased in Countries Affected by COVID-19

Governments have restricted public life during the COVID-19 pandemic, inter alia closing sports facilities and gyms. As regular exercise is essential for health, this study examined the effect of pandemic-related confinements on physical activity (PA) levels. A multinational survey was performed in 14 countries. Times spent in moderate-to-vigorous physical activity (MVPA) as well as in vigorous physical activity only (VPA) were assessed using the Nordic Physical Activity Questionnaire (short form). Data were obtained for leisure and occupational PA pre- and during restrictions. Compliance with PA guidelines was calculated based on the recommendations of the World Health Organization (WHO). In total, n = 13,503 respondents (39 ± 15 years, 59% females) were surveyed. Compared to pre-restrictions, overall self-reported PA declined by 41% (MVPA) and 42.2% (VPA). Reductions were higher for occupational vs. leisure time, young and old vs. middle-aged persons, previously more active vs. less active individuals, but similar between men and women. Compared to pre-pandemic, compliance with WHO guidelines decreased from 80.9% (95% CI: 80.3–81.7) to 62.5% (95% CI: 61.6–63.3). Results suggest PA levels have substantially decreased globally during the COVID-19 pandemic. Key stakeholders should consider strategies to mitigate loss in PA in order to preserve health during the pandemic.
Keywords: coronavirus; health; exercise; guidelines coronavirus; health; exercise; guidelines

In March 2020, the World Health Organization (WHO) classified the spread of the novel coronavirus (SARS-CoV2) as a global pandemic. Since this declaration by the WHO, the number of laboratory-confirmed cases has grown from 125,700 (11 March 2020) to 112,205,251 (24 February 2021), while the number of affected countries has increased to 192 [1]. To control the contagion, many governments imposed substantial restrictions on public life. Initial data support the assumption that related measures (e.g., business closures, bans of social gatherings or lockdowns) and the recommendation of social distancing can effectively limit the transmission of the virus [2,3,4]. However, despite representing a crucial cornerstone to reduce the spread of viral illness, confinement strategies may have detrimental consequences for health. For instance, analyses of quarantines instituted during previous pandemics showed a variety of adverse effects such as post-traumatic stress or symptoms of depression [5].
The specific strategies used by governments to contain COVID-19 have expanded to include the closure of public parks, gyms or sport facilities and clubs. As accessibility to such areas of recreation represents an essential facilitator of physical activity (PA) [6], limitation of spaces and opportunities to move and exercise may foster sedentary behavior. Whereas inactivity has been estimated to cause up to 9% of all premature deaths [7], regular PA is well established in helping to prevent a variety of chronic non-communicable diseases such as hypertonia, metabolic syndrome, type 2 diabetes or cancer [8]. In addition to its benefits on physical health, exercise represents a valuable intervention for psychological disorders, being capable of alleviating symptoms of depression and anxiety [9,10]. In total, large-scale epidemiological studies demonstrate that 150 min/week of moderate-to-vigorous PA reduces all-cause mortality by approximately 31% [11].
Regular PA does not only play a role in general health protection. Although its direct effects on the novel coronavirus are yet to be determined, exercise, along with diet, tackles obesity, which according to initial data, seems to be a risk factor for complications in patients hospitalized for COVID-19 [12]. PA can improve immune function, e.g., via mobilizing lymphocytes and releasing cytokines such as IL-6, IL-7 and IL-15 [13]. Additionally, individuals with high activity levels are less vulnerable to infections from influenza-, rhino- or herpesviruses [13]. Particularly relevant to COVID-19, a primarily respiratory disease, research in exercise immunology has shown that PA can effectively reduce upper respiratory tract infections [14,15]. Collectively, all these data suggest that maintaining regular movement is pivotal during pandemic-related confinements.
To date, the degree to which public life restrictions related to COVID-19 affect PA levels is unknown. Early evidence based on investigations with relatively small sample sizes, however, indicate reductions of PA [16,17,18,19,20]. The present study, therefore, aimed to evaluate changes of self-reported PA in countries with SARS-CoV2 outbreaks on a multinational level.

The PA portion of the ASAP questionnaire assessed self-reported PA levels prior to and during restrictions of public life. To quantify PA, we applied the Nordic Physical Activity Questionnaire-short (NPAQ-short), which is reliable (test–retest reliability: rho = 0.80 to 0.82) and valid for monitoring compliance with the WHO recommendations on PA [22]. With its two questions (Table 1), the instrument retrospectively measures the times (minutes) spent performing (1) moderate-to-vigorous physical activity (MVPA) and vigorous physical activity (VPA) during leisure time. The same categories (MVPA/VPA) were used to address PA during occupational time. The NPAQ-short defines moderate activities as those increasing heartbeat and breath while vigorous activities get the affected person’s heart racing, make him/her sweat and leave him/her so short of breath that speaking becomes difficult (Table 1).
In order to achieve comparability with regard to recall periods, the participants were asked to refer (a) to the duration of confinement measures at the time of the survey for restriction PA and (b) to an identical time interval before the imposition of lockdown measures for pre-restriction PA. In addition to the NPAQ-short, we assessed changes in total PA, including light activities, by means of a five-point Likert scale (large decrease, small decrease, no decrease, small increase, large increase).
The ASAP questionnaire was generated using a group consensus process and subsequently forward- and back-translated by native speakers. To increase face validity, focus groups comprising health experts (n = 12; physicians, physiotherapists, sports scientists, movement scientists, public health advisors) and laypersons (n = 18; males and females of varying ages and educational background/socioeconomic backgrounds) within each country reviewed the survey to ensure comprehension. Following minor adjustments based on the provided feedback, the testing persons reported excellent comprehensibility and clarity.
The ASAP survey was administered via the platform SoSci Survey (SoSci Survey GmbH, Munich, Germany) between 3 April and 9 May 2020. During this timeframe, it was available for four weeks in each country.

In addition to computing changes in total leisure and occupational MVPA/VPA (min/week), compliance with the WHO’s guidelines was calculated as a dichotomous outcome (fulfilled, not fulfilled). The WHO recommends the accumulation of ≥150 min moderate activity, ≥75 min VPA or an equivalent combination of both. In addition, as the survey was performed in several countries, the Containment and Health Index (CHI [23]) was calculated for the study period. The score uses a variety of criteria to generate a score reflecting the severity of “lockdown” restrictions and measures of health protection.

Data are reported as means including 95% confidence intervals and/or percentages, as appropriate. The normal distribution of data was verified by means of the Shapiro–Wilk test. To estimate the risk of non-response bias, wave analyses were conducted [24]. Specifically, the responses of the first 10% of the participants (early responders) in each recruitment wave were compared to those of the last 10% (late responders) by means of t-tests for independent samples. The rationale behind this is that early responders are assumed to be more motivated than late responders, which can be considered equivalent to non-responders. Hence, if the wave analyses do not systematically show significant findings, the absence of non-response bias is assumed. Data analyses were performed using standard statistical software packages (e.g., SPSS 22, SPSS Inc., Chicago, IL, USA and BiAs statistics, Goethe University, Frankfurt/Main, Germany). The significance level was set to α = 0.05.

Participants totaled n = 13,503 (39 ± 15 years, 59% females). Fifty-four individuals reported having tested positive for SARS-CoV in the past, which is equivalent to 0.40 percent of the sample. Wave analyses yielded no indication of non-response bias (p > 0.05).

Mean self-reported MVPA (−41.0%) and VPA (−42.2%) both decreased to a similar degree from pre- to during restrictions (Table 2). More than two-thirds of participants (66.8%; n = 9016) were unable to maintain their previous activity levels. Declines in PA were 10% to 20% higher for occupational than for leisure time (Table 2). While there were no major differences between men and women, participants with higher pre-restriction PA had larger decreases than previously less active individuals (Figure 1). With regard to age, the highest reductions were found in the youngest and oldest participants, resembling a U-shaped distribution. Elderly individuals (70 years and older), furthermore, exhibited the highest VPA decreases (Figure 2). Significant variation was observed between countries with the highest relative reductions in Argentina, Brazil, Chile and South Africa (all > 50% in MVPA; Figure 3). Comparisons against CHI data (Figure 4) suggested a correlation between the severity of public life restrictions/health-related measures and PA reductions in most countries, although both variables seemed independent in some cases (i.e., low CHI values for Brazil, Chile and Spain despite large PA decreases). Participants with past SARS-CoV2 infection had comparable pre-restriction PA, but displayed stronger reductions in vigorous activities (−48.6% vs. −42.2%).
Regarding overall PA, including light activities, most participants (75.5%) reported decreases during restrictions, with 48.7% of them describing a large reduction. Increases from pre-restrictions were indicated in 17.7% of the participants.

Pre-restrictions, 80.9% (95% CI: 80.3–81.7) of the sample (n = 10,938) were in compliance with the PA recommendations. Post-restrictions, the overall population fulfilling the guidelines decreased to 62.5% (95% CI: 61.6–63.3; n = 8435). More than one quarter (28.4%, n = 3104) of the participants previously meeting the required cut-offs subsequently fell short during the restrictions. In total, for the individuals who complied with the guidelines pre-restrictions, the average reported MVPA levels were reduced during the restrictions (−43.2%). In contrast, those who fell below guidelines pre-restrictions were able to increase self-reported MVPA (+56.9%), but in most cases (76.6%), this was not sufficient to achieve compliance. Participants with past SARS-CoV2 infection, compared to others, displayed massive declines in guideline compliance (88.9% to 50% vs. 80.9% to 62.5%).
Individuals losing guideline compliance during lockdowns were of similar age as those maintaining it (Table 3). However, persons newly fulfilling the guidelines were three years younger than others. With regard to sex, a slightly higher share of females gained compliance from pre- to during restrictions.

Self-reported PA substantially decreased following public life restrictions associated with the COVID-19 pandemic. In view of the short- and long-term consequences of inactivity, such as impaired mental and physical wellbeing, a possible higher susceptibility to viral infections and increased risk of non-communicable diseases, the implications of our findings warrant careful consideration by governmental and health-related decision-makers.

The study was conducted according to the guidelines of the Declaration of Helsinki, and approved by the Ethics Committee of the Faculty of Psychology and Sports Sciences of Goethe University Frankfurt (protocol code 2020-13, 6 April 2020).

Digital informed consent was obtained from all subjects involved in the study.

Data can be made available upon request. 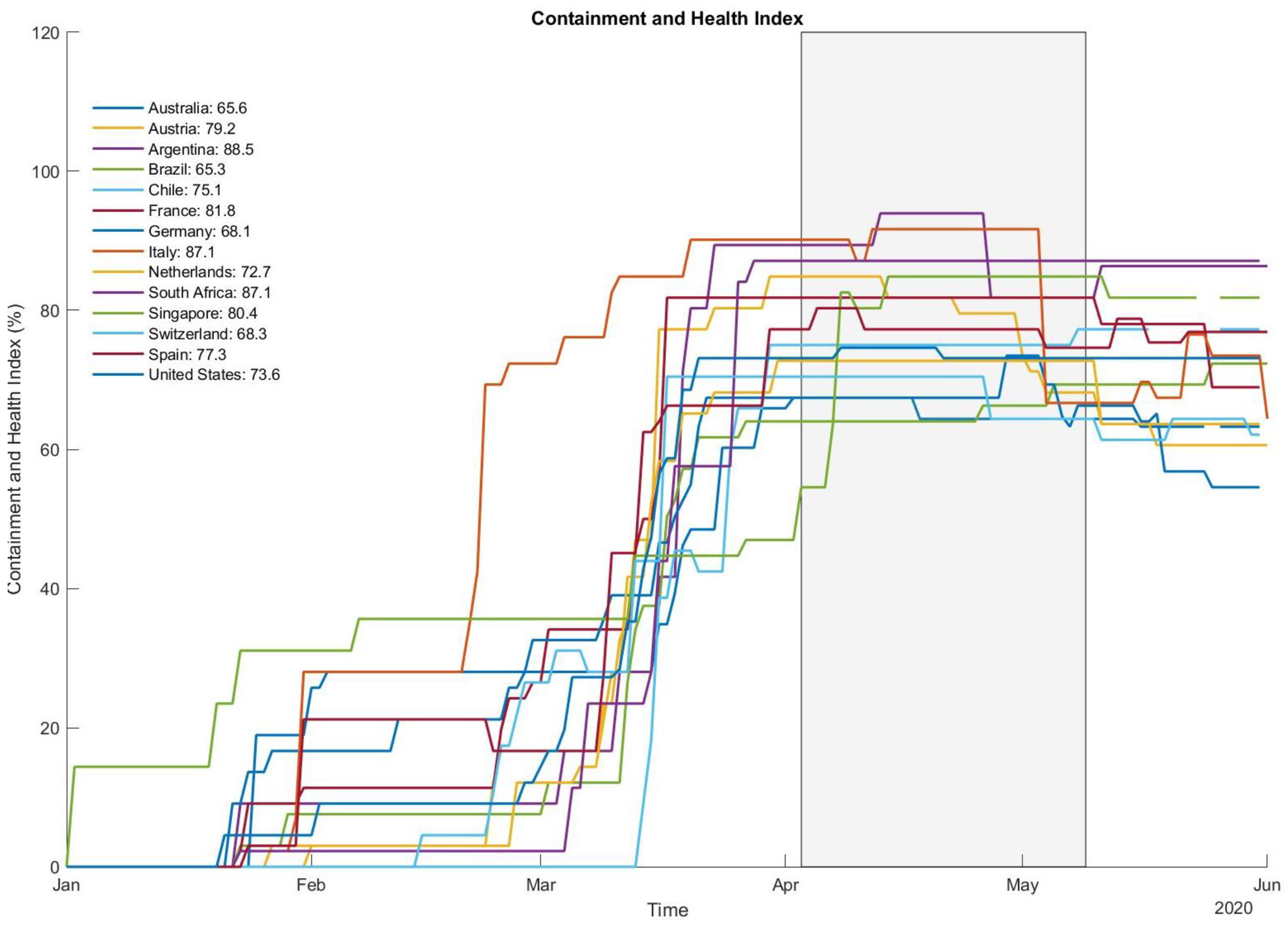