Environmental Exposures in Singapore Schools: An Ecological Study
Next Article in Special Issue

Sex-Related Disparities in the Incidence and Outcomes of Ischemic Stroke among Type 2 Diabetes Patients. A Matched-Pair Analysis Using the Spanish National Hospital Discharge Database for Years 2016–2018
Previous Article in Journal

Do Diabetes Mellitus Differences Exist within Generations? Three Generations of Moluccans in The Netherlands

Reversal of the Upward Trend of Obesity in Boys, but Not in Girls, in Spain

Overweight and obesity are important health problems that incur immediate and negative consequences, including pediatric hypertension, abnormal glucose tolerance, and osteomuscular, neurological, pulmonary, gastrointestinal, and liver alterations [1,2]. Moreover, in the long term, childhood overweight and obesity increase the risk of chronic disease in adulthood, along with mental health disorders and social stigmatization [3]. From a health system perspective, childhood obesity and derived diseases lead to an increase in premature disability and mortality, and the associated treatments are responsible for the highest healthcare costs in children and young people [4].
The prevalence of overweight and obesity has been on the rise in recent decades, globally and in all age groups, including in children and adolescents. In the United States, childhood overweight has doubled in children and tripled in adolescents over the past 30 years [5].
However, since the turn of the century, different studies in high-income countries have shown that the prevalence of childhood overweight and obesity have stabilized. In one study in nine European countries and Australia, weight gain stalled between 1995 and 2008 [6], while other authors have reported similar findings in the UK, Ireland, and Sweden [3] as well as in China [7]. In Spain, the overall results for the most recent studies investigating trends in childhood overweight and obesity have also reported flattening rates for these indicators [8].
Other lines of contemporary research have studied the influence of socioeconomic factors on the risk of excess weight. In adults living in high-income countries, there is a clear, negative relationship between socioeconomic status (SES) and obesity [9]: the higher a person’s SES, the lower their weight. However, this relationship is less clear in children and adolescents [10,11,12]; in one multicenter study in Europe, heterogeneous relationships were observed between the parents’ SES and children’s body mass index (BMI) [9].
In childhood, the inverse relationship between obesity and SES was first reported by Stunkard et al. [13] in 1972; authors observed a six-fold higher prevalence of obesity in girls from families with low SES along with a lower-magnitude association in boys. Therefore, the aim of this study was to estimate the prevalence of overweight and obesity in boys and girls in Spain and to compare trends from 1995 to 2017. A secondary aim was to assess differences in overweight and obesity according to the parents’ educational level.

This study used data from Spain’s national health surveys from 1995–1997, 2007, and 2017. Subjects were chosen by means of stratified multistage sampling: the first-stage units were census sections; the second-stage units, the household; the third-stage units, the selected people in the household (children and adolescents aged 5 to 15 years). The nonresponse rate in the interviews ranged from 4 to 10%.

BMI (kg/m2) was calculated according to the weight and height reported by parents or guardians. Overweight and obesity were defined according to Cole et al.’s 14 criteria for children and adolescents aged 2 to 18 years, which establish BMI cutoffs derived from the International Obesity Task Force recommendations [14] in adults (overweight: 25 kg/m2, obesity: 30 kg/m2). Nonresponse to items for weight and height were 32.1% in 1995–1997, 21.8% in 2007, and 10.6% in 2017.
The head of household’s educational level was used to measure SES [15]. The nonresponse rate for this variable ranged from 34.6% in 1997 to 10% in 2017. Responses were dichotomized as low educational level (up to 10th grade—the compulsory level of education in Spain for adolescents up to 16 years) and high educational level (educated beyond the minimum compulsory studies).
We excluded children with missing data for weight or height, which may have increased the risk of information bias if the participants with missing data were systematically different from those without. Additionally, in the analyses according to educational level, we have excluded children with missing data for this variable. However, there was no difference in the distribution by age and sex between those who answered and did not answer by weight and height, there was no relation between the measure of socioeconomic position used here and the nonresponse.

Separate analyses were performed for boys and girls. We first studied prevalence of overweight and obesity in children aged 5 to 15 years before stratifying the results by age: 5 to 9 years and 10 to 15 years. Prevalence of overweight and obesity was calculated by gender and age group, and results were expressed with their 95% confidence interval (CI). Trends in prevalence were determined by analyzing results from the three surveys, using the logistic regression models adjusted by age.
The relationship between overweight/obesity in boys and girls and their parents’ educational level was expressed as the odds ratio (OR) and 95% CI, adjusted for age and using the high-education group as the reference.

Figure 1 shows the evolution of overweight from 1995–1997 to 2017 in all children aged 5 to 15 years. In boys, the prevalence rose from the first to the second survey and fell thereafter, while in girls, the initial increase (in 2007) was followed by a period of stability (to 2017). Figure 2 shows the results for obesity, which followed a similar pattern: prevalence rose and then fell in boys, and it rose and then stayed flat in girls.
In boys in the younger age group, there was an 11% decrease in prevalence for both overweight and obesity along the whole study period (Table 1). In girls of this age group, overweight and obesity rose modestly from 1995–1997 to 2007 and then began to taper in 2017. The relative difference between the first and third surveys was a 1.4% increase in overweight and a 14% increase in obesity (Table 1). These changes in prevalence between another year were not statistically significant (p > 0.05).
In boys aged 10 to 15 years (Table 2), the prevalence of overweight rose notably in 2007 and descended very slightly in 2017, for a net 17% increase relative to the first survey. The prevalence of obesity rose by more than 40% between the first and second surveys, and although the trend changed direction in 2017, there were still 36.1% more obese boys compared to the 1995–1997 survey. Girls in the older age group also saw a pronounced increase (34%) in prevalence of overweight from 1995–1997 to 2017. Obesity rates also jumped, tripling in prevalence from 1.1% in the 1995–1997 survey to 3.7% in the 2017 survey (Table 2). These changes in prevalence across time were not statistically significant (p > 0.05).
The mean BMI reflects the same trend as overweight and obesity. Figures S1 and S2 show that the mean BMI decreased in 2017 compared to 2007, while the magnitude of the mean between 1997 and 2007 was similar or somewhat higher in 2007.
Table 3 presents the ORs for overweight and obesity in the total sample (5 to 15 years old), by gender and parents’ educational level and adjusted for age group. Number of subjects analyzed were: 1783 in 1997, 4616 in 2007, and 3570 in 2017. Low educational level in parents increased their sons’ risk of being overweight for all three survey periods. In girls, this association was not clear in the 1995–1997 data, but in both 2007 and 2017, it was stronger than that in boys.
Regarding the association between parental education and childhood obesity in boys (Table 3), the first survey shows an increased risk bordering on statistical significance, and in the second, the relationship is unequivocal. By the 2017 survey, however, the magnitude of the association weakened once again. In girls, no clear relationship between parents’ education and obesity existed in the 1995–1997 data; the 2007 data were suggestive of an increased risk, and by 2017, parents’ low educational level was associated with a two-fold increase in their daughters’ risk of being obese.

This study uses a representative sample of children in Spain aged 5 to 15 years. We excluded children with missing data for weight or height, which may have increased the risk of information bias if the participants with missing data were systematically different from those without.
We used the weights and heights reported by the head of household, a measure that has shown reasonable validity for assessing obesity in epidemiological studies [16,18,20]. We must assume some risk of measurement bias, as parents may tend to underestimate their children’s weight. However, the data collection method was the same in all three surveys, so we believe that the comparison is valid.
We have used the cut-off points for overweight and obesity recommended by the International Obesity Task Force [14]. However, we cannot rule out that the results were different with other cut-off points. However, we have analyzed the BMI as a quantitative variable and the magnitude of the mean obtained shows a trend similar to that observed with overweight and obesity.

Patient consent was waived considering it was conducted using anonymized, public access free of charge databases provided by the Spanish Statistical Institute, which makes unnecessary to obtain ethical review and approval according to the Spanish legislation.

Publicly available datasets were analyzed in this study. This data can be found here: https://www.mscbs.gob.es/estadisticas/microdatos.do. 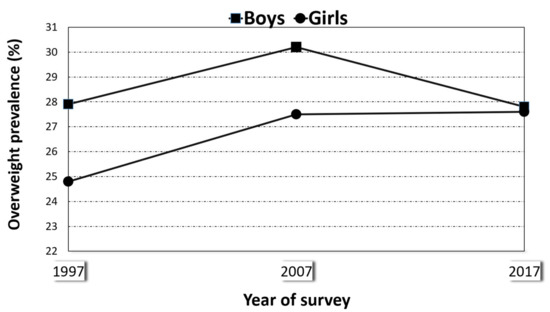