A Positive Relationship between Exposure to Heavy Metals and Development of Chronic Diseases: A Case Study from Chile

Chile is a mining country, where waste mining is frequently found in the vicinity of inhabited areas. To explore the association between metal exposure and alterations in glucose metabolism, inflammatory status, and oxidative stress in individuals with chronic exposure to metals, a cross-sectional study was performed with 25 volunteers, between 45–65 years old. Inductive coupled plasma mass spectrometry (ICP-MS) was used to measure urinary levels of total arsenic (As) and its metabolites, cooper, nickel, chromium, and lead. Lipid profile, glucose, and insulin were measured in blood, as well as inflammation (interleukin-6, IL-6) and oxidative stress (8-hydroxy-2′deoxyguanosine, 8-OHdG) markers. Increased levels of Low-density lipoprotein, high-density lipoproteins, cholesterol and 8-OHdG, and the index for homeostasis model assessment—insulin resistance (HOMA-IR) were observed in 72%, 60%, and 56% of the volunteers, respectively. Blood-glucose levels were correlated with dimethylarsinic acid (DMA) (R2 = 0.47, p = 0.019), inorganic As (Asi) (R2 = 0.40, p = 0.012), and Ni (R2 = 0.56; p = 0.044). The models with these compounds explained 72% of the glycemia variability (βDMA = −6.47; βAsi = 6.68; βNi = 6.87). Ni showed a significantly influence on IL-6 variability (β = 0.85: R2 = 0.36). Changes in glycemia could be related to exposure to low levels of Asi and Ni, representing risk factors for metabolic diseases. Body mass index would confuse the relation between IL-6 and Ni levels, probably due to known chronic inflammation present in obese people. View Full-Text
Keywords: metabolic disorders; metal exposure; glycemia; cholesterol metabolic disorders; metal exposure; glycemia; cholesterol
►▼ Show Figures 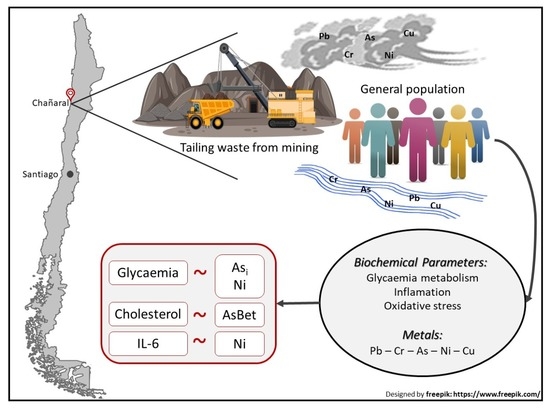