Recently, the application of endophytes in the alleviation of different types of stresses has received considerable attention, but their role in drought stress alleviation and growth promotion in soybean is not well-stated. In this study, twenty bacterial endophytes were isolated from soybean root tissues and screened for plant growth-promoting (PGP) traits, biocontrol potential, and drought stress alleviation. Out of them, 80% showed PGP traits, and 20% showed antagonistic activity against Fusarium oxysporum (ITCC 2389), Macrophomina phaseolina (ITCC 1800), and Alternaria alternata (ITCC 3467), and only three of them showed drought tolerance up to 15% (−0.3 MPa). Results indicated that drought-tolerant PGP endophytic bacteria enhanced soybean seedling growth under drought stress conditions. Morphological, biochemical, and molecular characterization (16S rRNA) revealed that these three bacterial isolates, AKAD A1-1, AKAD A1-2, and AKAD A1-16, closely resemble Bacillus cereus (GenBank accession No. MN079048), Pseudomonas otitidis (MW301101), and Pseudomonas sp. (MN079074), respectively. We observed that the soybean seedlings were grown in well-watered and drought-stressed soil showed the adverse effect of drought stress on morphological (stem length, root length, plant fresh and dry weight) as well as on biochemical parameters (a decline of photosynthetic pigments, membrane damage, etc.). However, soybean seedlings inoculated with these endophytes have improved the biomass significantly (p ≤ 0.05) under normal as well as in drought stress conditions over control treatments by influencing several biochemical changes. Among these three endophytes, AKAD A1-16 performed better than AKAD A1-2 and AKAD A1-1, which was further validated by the ability to produce the enzyme 1-aminocyclopropane-1-carboxylate (ACC) deaminase in the following order: AKAD A1-16 > AKAD A1-2 > AKAD A1-1. Scanning electron microscopy images also showed a bacterial presence inside the roots of soybean seedlings. These findings supported the application of bacterial root endophytes as a potential tool to mitigate the effect of drought as well as of fungal diseases on the early seedling growth of soybean. View Full-Text
Keywords: drought stress; plant growth promotion; endophytic bacteria; biocontrol activity; agriculture productivity drought stress; plant growth promotion; endophytic bacteria; biocontrol activity; agriculture productivity
►▼ Show Figures 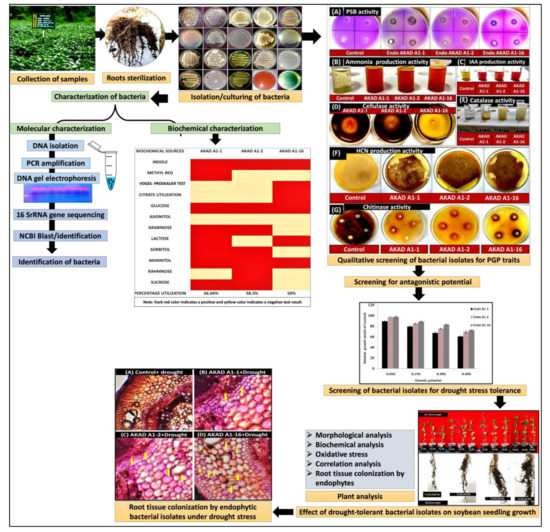 Ashwani Kumar
The current focus of Ashwani Kumar, Metagenomics and Secretomics Laboratory, is on plant–microbe interaction, abiotic stress tolerance, lignocellulosic biofuels, bioremediation, and metagenomics. Recently, he was featured in the world's top 2% of scientists and ranked 750 in Plant Biology and Botany according to PLos Biology. He has published 56 high-impact articles in international journals with the cumulative IF of over 200, his Google scholar citations amount to 3600; i10 index—44; h index—23. He has also published 20 book chapters and given over 25 talks at international conferences. He has received several national and international awards, such as Commonwealth Fellowship at the University of Saskatchewan, Claude Leon and National Research Foundation Fellowship in South Africa. He has been a GIAN Program, MHRD, Govt of India, Shastri Indo-Canada Mobility Program Fellow at Concordia University, Montreal, Canada since 2019. He is life member of BRSI, NIE, and ISEB, India, and was recently elected Fellow of the International Society of Environmental Botanists. He serves on the editorial board of Plos One, Frontiers in Microbiology, and Frontiers in Agronomy.
Zoom | Orient | As Lines | As Sticks | As Cartoon | As Surface | Previous Scene | Next Scene
We use cookies on our website to ensure you get the best experience. Read more about our cookies here.
Accept
We have just recently launched a new version of our website. Help us to further improve by taking part in this short 5 minute survey here. here.
Never show this again