Spatio-Temporal Dynamics of Plasmodium falciparum and Plasmodium vivax in French Guiana: 2005–2019
Next Article in Special Issue

Background: the main objective of this study was to analyze the potential short-, medium- and long-term effects of a therapeutic physical exercise (TFE) programme on the functionality of amyotrophic lateral sclerosis (ALS) patients, measured with the Revised Amyotrophic Lateral Sclerosis Functional Scale (ALSFRS-R) scale. Methods: a systematic review of the PubMed, SCOPUS, Cochrane, Scientific Electronic Library Online (Scielo), Physiotherapy Evidence Database (PEDro), Cumulative Index of Nursing and Allied Health Literature (CINAHL) and Medical Literature Analysis and Retrieval System Online (MEDline) databases was carried out. The information was filtered using the following Medical Subjects Heading (MeSH) terms: “Amyotrophic lateral sclerosis”, “Physical Therapy”, and “Physical and Rehabilitation Medicine”. The internal validity of the selected documents was evaluated using the PEDro scale. The study included clinical trials published in the last 5 years in which one of the interventions was therapeutic physical exercise in patients with ALS, using the ALSFRS-R as the main outcome variable and functional variables as secondary variables. Results: 10 clinical trials were analyzed, with an internal validity of 5–7 points. The TFE groups showed significant short-, medium- and long-term differences, obtaining a mean difference of 5.8 points compared to the 7.6 points obtained by the control groups, at six months, measured with ALSFRS-R. In addition, the participants showed significant improvements in functional abilities in the short, medium and long terms. Conclusions: Therapeutic physical exercise could contribute to slowing down the deterioration of the musculature of patients with ALS, thus facilitating their performance in activities of daily living, based on the significant differences shown by these individuals in the short, medium and long term both in subjective perception, measured with ALSFRS-R, and functional capacities. View Full-Text
Keywords: amyotrophic lateral sclerosis; physical therapy; rehabilitation; exercise amyotrophic lateral sclerosis; physical therapy; rehabilitation; exercise
►▼ Show Figures 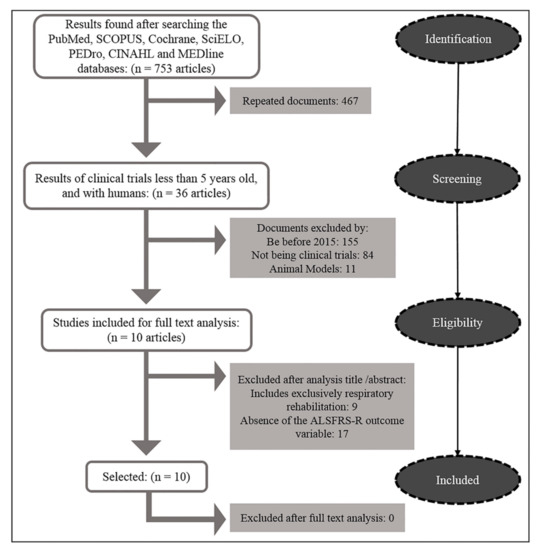