:
Virtual reality (VR)-guided exercise therapy using mediVR KAGURA has been reported to improve gait function by extending the arm to spatial targets while sitting. We aimed to investigate toe and trunk–pelvic function and plantar sensation during gait in a postoperative patient with hallux valgus. A 60-year-old woman, whose foot deformities had improved 6 months earlier, participated in the study. The exercise therapy interventions were performed twice weekly for 15 min. This study used an A-B-A design: 1-week pre-phase, 3-week intervention phase, and 2-week post-phase. The plantar pressure distribution and thoracic and pelvic displacements during gait were recorded at the end of each phase. The tactile pressure thresholds of the foot were determined before and after each exercise. The maximum force and impulse under the hallux increased after the intervention. The sensory threshold of the hallux was reduced. The amplitude of the thoracic and pelvic displacement was shortened in lateral and extended in the vertical and progressional directions after the intervention. We found that a 3-week VR-guided exercise improved toe function, plantar sensation, and postural adjustment of the trunk and pelvis during gait in a patient who had undergone surgery for hallux valgus, and the effects continued for 2 weeks.
Keywords:
single-case study; ABA experimental design; virtual reality; hallux valgus; seated rehabilitation

Deformities of the hallux valgus cause chronic pain. This pain disrupts gait, affects the whole body, and reduces the quality of life [1,2]. Conservative treatment for hallux valgus includes exercise therapies, such as strengthening of the hallux abductor, orthotic therapy, and medication. If the pain does not improve with these treatments, surgery is indicated [3]. However, in cases of hallux valgus after correcting the alignment by surgery, gait problems often persist and cause recurrent deformity and pain [4,5]. It is necessary to improve gait in conjunction with local conservative treatment and surgery. In addition, rehabilitation for hallux valgus is often provided at an outpatient clinic, and the effects of exercise therapy on gait should last for several weeks. However, there are a few reports on effective exercise therapy for gait in patients with hallux valgus [6].
mediVR KAGURA® (mediVR, Inc., Osaka, Japan) has been reported to improve walking ability without increasing lower limb muscle strength [7,8]; however, the mechanism remains unclear. Exercise therapy with the use of virtual reality (VR) requires quick arm movements extending to spatial targets. This reaching motion has been shown to improve the movement strategy of the trunk [9] and upper limb function [10]. We hypothesized that the load on the pelvis and lower limbs with trunk movement could improve gait function. Therefore, in this study, we investigated the effects of VR-guided sitting exercise on toe and trunk–pelvic function during gait in a postoperative patient with hallux valgus.

A 60-year-old woman participated in this study. Her height and weight were 156.5 cm and 58.0 kg, respectively. At the time of participation, 6 months had passed since bilateral surgery for hallux valgus, and the hallux valgus angles were 7.3° on the right and 14.8° on the left. She had been bothered by the hallux valgus since she was in her 50s, and had been using commercially available wide shoes and a nighttime toe separator splint to reduce the pain, which interfered with her daily life. Subsequently, she visited a hospital for the first time and immediately underwent surgery as indicated, 6 months before our intervention. She was hospitalized for three weeks, postoperatively, and underwent standard exercise therapy for hallux valgus, range of motion exercises, and muscle strengthening training for the feet. She was independent in her daily life and returned to work after being discharged from the hospital. There were no other therapeutic interventions in the last 5 months. However, she still experienced pain and unsteadiness during gait. The level of pain at the time of intervention in this study was 5 on the Numerical Rating Scale (NRS).
This study was approved by the Research Ethics Review Committee of Morinomiya University of Medical Sciences (reference number: 2020-006). The purpose of this study was explained to her, and consent was obtained before the study was conducted.

The VR-guided exercise was performed while sitting in a chair with a backrest, wearing a head-mounted display, and holding a controller with both hands (Figure 2). The participant was instructed to, as quickly as possible, catch red or blue falling objects or red or blue fixed targets in a three-dimensional virtual space, with her right or left controller, respectively. The red objects and targets were presented in the right space only, and the blue ones were presented in the left space only to prevent her from moving across the midline. The objects and targets were presented straight ahead and diagonally 45° ahead on each side and at three distances in each direction (at stretched arm length, 90% of maximum reach length, and halfway between), for a total of 12 locations. The first exercise program was configured manually by a skilled therapist to ensure that physical activity was fully induced. The same program was used for the subsequent exercise sessions.

Static and dynamic plantar pressure data were recorded using a Footscan® pressure plate (RSscan International, Olen, Belgium; 578 × 418 × 12 mm with 4096 resistive sensors, a data acquisition frequency of 300 Hz, and a pressure range of 1–127 N/cm2), which was connected to a computer. The participant was asked to stand for 60 s and walk at a comfortable speed on the plate, which was located at the center of a 10-m walking path. The recording of dynamic plantar pressure was terminated if the patient stepped on the plate three times with her right foot. The data were analyzed using the Scientific Footscan® software (RSscan International, Olen, Belgium). Footprint impressions in the standing position were obtained, and arch width, which was defined as the length of a perpendicular line drawn from the mid-point of the medial border in the arch area to the mid-foot [11], was measured using a ruler. The maximum force and impulse of the vertical force component at the hallux and first metatarsal zones were calculated, and the average value of the three gait cycles was obtained.
During the gait cycle, thoracic and pelvic displacements were recorded using two small sensors with built-in acceleration and angular velocity sensors (MVP-WS2-S, MicroStone Corp., Nagano, Japan), which were connected to a computer. Each sensor was fixed to her back at the seventh thoracic and first sacral vertebrae. The vertical, lateral, and progressional amplitudes of the thoracic and pelvic displacements were calculated from the obtained data, excluding the gait cycle wherein the patient stepped on the platform. The stride-to-stride time variability (STV) was also calculated [12].
Tactile pressure thresholds of the planter under the hallux and first metatarsal head were identified using Semmes–Weinstein monofilaments (Sakai Medical Co., Ltd., Tokyo, Japan), which consisted of 20 filaments of 0.008–300 g. Pressure was applied for approximately 1.5 s until a bend at a right angle was obtained [13]. The force of the filament with three accurate responses was adopted as the threshold for the site.

Arch widths measured from static pressure distribution were 28 mm, 32 mm, and 30 mm in A1, B, and A2 periods, respectively (Figure 3): the NRS for pain was 5, 4, and 5, respectively.
The results of the kinematic parameters in gait for A1, B, and A2 are shown in Table 1. The maximum force and impulse of the hallux zone during gait increased from A1 to B and A2 (Figure 4). The impulse of the first metatarsal zone decreased from A1 to A2 (Figure 4). The amplitudes of the thoracic and pelvic displacement in the vertical and progressional directions were extended, as were those of thoracic displacement in the lateral direction from A1 to B and A2 (Figure 5). In the frontal plane, the trajectory of these displacements changed into a figure-of-eight (middle row of Figure 5), and the STV decreased from A1 to B and A2 (Table 1). The tactile pressure threshold of the hallux was 8 g in A1 and was lowered to 0.4 g by the third exercise session (Figure 6). There was no significant change in the first metatarsal head, and the threshold was in the range of 60–100 g (Figure 7).

This study found that a 3-week VR-guided exercise improved toe function, plantar sensation, and postural adjustment of the trunk and pelvis during gait in a patient who had undergone surgery for hallux valgus, and the effects continued for 2 weeks. It is necessary to examine whether this effect is evident in all cases of hallux valgus. In the future, the VR-guided exercise in this study may be investigated for application in preventive and therapeutic approaches for hallux valgus before surgery and in early treatment after surgery.

This work was funded by JSPS KAKENHI Grant Number JP21K17503.

This study was approved by the Research Ethics Review Committee of Morinomiya University of Medical Sciences (reference number: 2020-006).

Informed consent was obtained from the subject involved in the study.

Masahiko Hara is the chief executive officer and stockholder of mediVR, Inc., a company that holds several patents on VR-guided, dual-task rehabilitation. However, this case report did not receive any specific grant from the company. The other authors declare no conflict of interest associated with this manuscript. 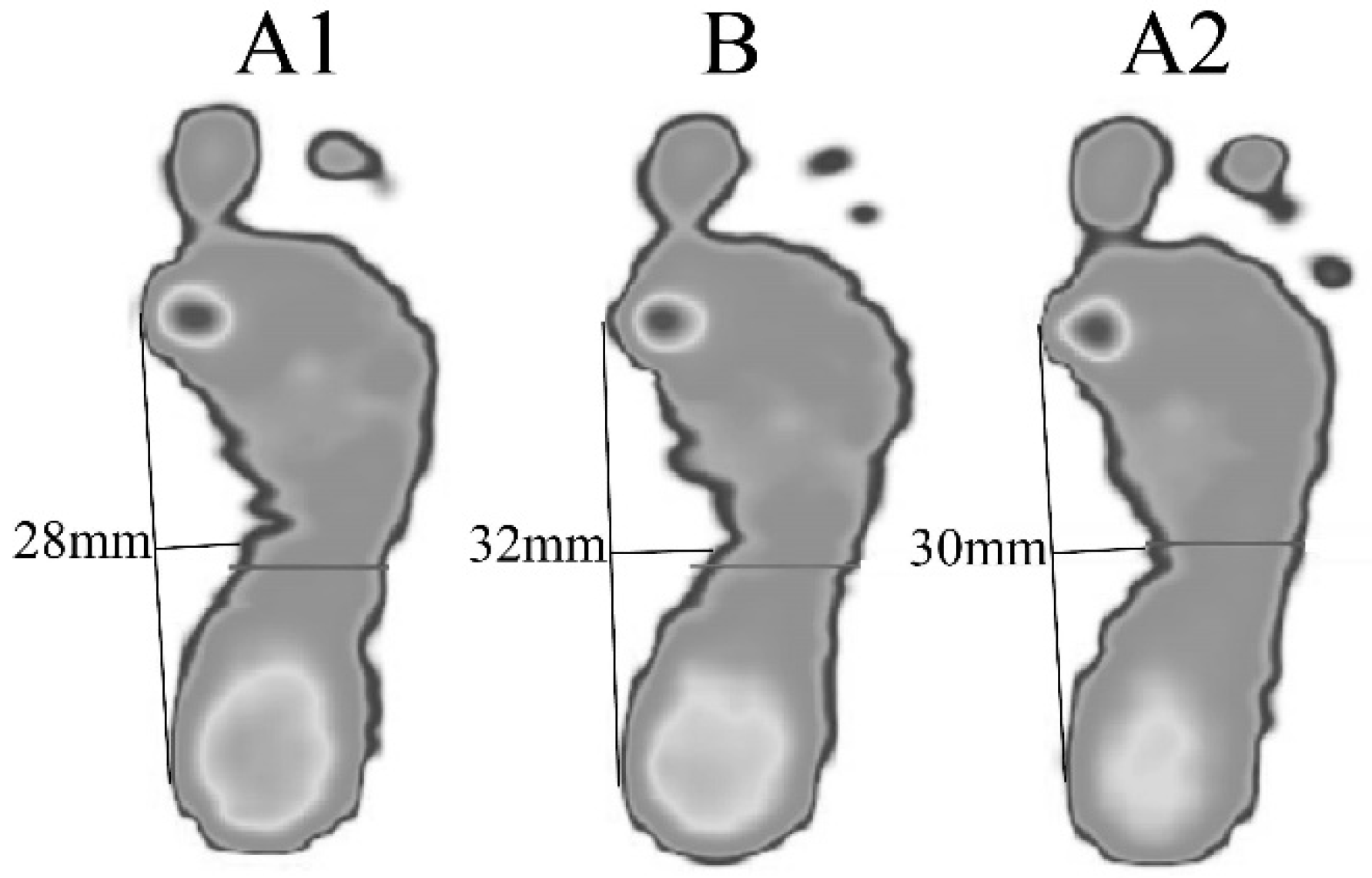